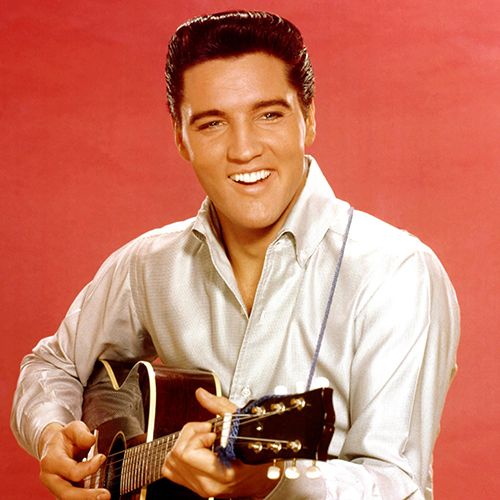 Who Was Elvis Presley?

Elvis Presley came from very humble beginnings and grew up to become one of the biggest names in rock 'n' roll. By the mid-1950s, he appeared on the radio, television and the silver screen. On August 16, 1977, at age 42, he died of heart failure, which was related to his drug addiction. Since his death, Presley has remained one of the world's most popular music icons.

Elvis Aron Presley was born on January 8, 1935, in Tupelo, Mississippi. (He later changed the spelling of his middle name to the biblical form of Aaron.) Presley was supposed to be a twin, but his brother, Jesse Garon (sometimes spelled Jessie) was stillborn. From very humble beginnings, Presley grew up to become one of the biggest names in rock 'n' roll.

Raised by loving, working-class parents, Presley's family had little money, and they moved from place to place frequently. He was deeply devoted to his parents, especially his mother, Gladys, and was raised to have a strong faith in God. Presley attended the Assembly of God Church with his parents, where gospel music became an important influence for him.

Presley received his first guitar as a gift from his mother on his 11th birthday in 1946 and had his first taste of musical success a few years later when he won a talent show at Humes High School in Memphis. After graduating in 1953, he worked a number of jobs while pursuing his musical dream. He cut his first demo record at what later became known as Sun Studio that year, and before long, Sam Phillips, the record label owner, decided to take the young performer under his wing. Presley soon began touring and recording, trying to catch his first big break. "That's All Right" was Presley's first single in 1954.

In 1955, Presley began to develop a following with fans being drawn to his unusual musical style, provocative gyrating hips and good looks. That same year, he signed with RCA Records, a deal worked out by his manager, Colonel Tom Parker. Presley was on a roll, scoring his first No. 1 single with "Heartbreak Hotel," as well as his first No. 1 album, Elvis Presley, and signing a movie contract with Paramount Pictures — all in 1956. Despite the uproar that his sexy dance moves caused, he also became a popular guest on a number of television variety shows.

Soon, Presley was everywhere, working as a musician and actor. His first film, Love Me Tender (1956), was a box office hit. Even a stint in the U.S. military couldn't put a damper on Presley's thriving career. He received his draft notice in 1957 and was inducted into the Army the following March. He eventually served in Germany for about a year and a half. Shortly before Presley left for Europe, his beloved mother, Gladys, died. He was granted a leave and returned to Memphis for the funeral. Deeply saddened by her death, Presley returned to duty. While in Germany, his spirits were lifted slightly when he met a young teenager named Priscilla Beaulieu. The pair fell in love and married on May 1, 1967, in Las Vegas, Nevada.

After leaving the Army in 1960, Presley resumed his career and was soon back at the top of the charts with the soundtrack for his film GI Blues. He continued recording music and acting in such films as Blue Hawaii (1961), Girls! Girls! Girls! (1962) and Viva Las Vegas (1964). Though his films were often hit or miss with both critics and audiences, they brought in a profit and the soundtracks usually sold well. By the late 1960s, however, the enigmatic performer appeared to be losing his box office appeal. Proving he was still the "King of Rock 'n' Roll," he recorded his first TV special in 1968, often referred to as the "'68 Comeback." He wowed audiences with his performance, which showcased his talents as a singer and a guitarist.

Around this time, Presley's personal life also seemed to be on an upswing. He and Priscilla wed in 1967 and had a daughter, Lisa Marie, the following year. Unfortunately, this joyous time would not last. By the early 1970s, Presley's marriage was falling apart. The couple divorced in 1973, and Priscilla received custody of Lisa Marie. Presley was also wrestling with other personal problems, including a growing addiction to prescription drugs; the once-thin rock star was battling a weight problem, and his destructive lifestyle caught up with him that fall when he was hospitalized for drug-related health problems. Despite his personal obstacles, Presley remained a popular draw in Las Vegas and on tour. He performed at his last concert in June 1977, in Indianapolis, Indiana. After the concert, he returned home to his Memphis mansion, Graceland, to prepare for another tour.

On the morning of August 16, 1977, Presley died of heart failure, at the age of 42. It was later ruled that his death was related to his prescription drug use. Presley was buried on the Graceland property, near the gravesites of his mother, Gladys, father Vernon and grandmother Minnie Mae Hood Presley.

Throughout his amazing career, Presley helped popularize rock 'n' roll music in America. He also won three Grammy Awards for his gospel recordings. A major musical force, Presley had 18 No. 1 singles, including "Don't Be Cruel," "Good Luck Charm" and "Suspicious Minds," as well as countless gold and platinum albums. He was one of the first performers inducted into the Rock and Roll Hall of Fame (1986). But Presley has been recognized for his contributions to several musical genres, most notably rock, country and gospel. In 1998, Presley was posthumously inducted into the Country Music Hall of Fame; three years later, he was posthumously inducted into the Gospel Music Association's Gospel Music Hall of Fame.

Presley's Memphis home, Graceland, is open to the public, and numerous fans from around the world visit the legendary residence annually, especially around Presley's birthday and the anniversary of his death.

"You should see this from our point-of-view. It's amazing," Priscilla said during the event, according to the Washington Post. "The candles are lit. It's truly a sight to behold ... This is something that Elvis would never, ever have believed could have taken place here." 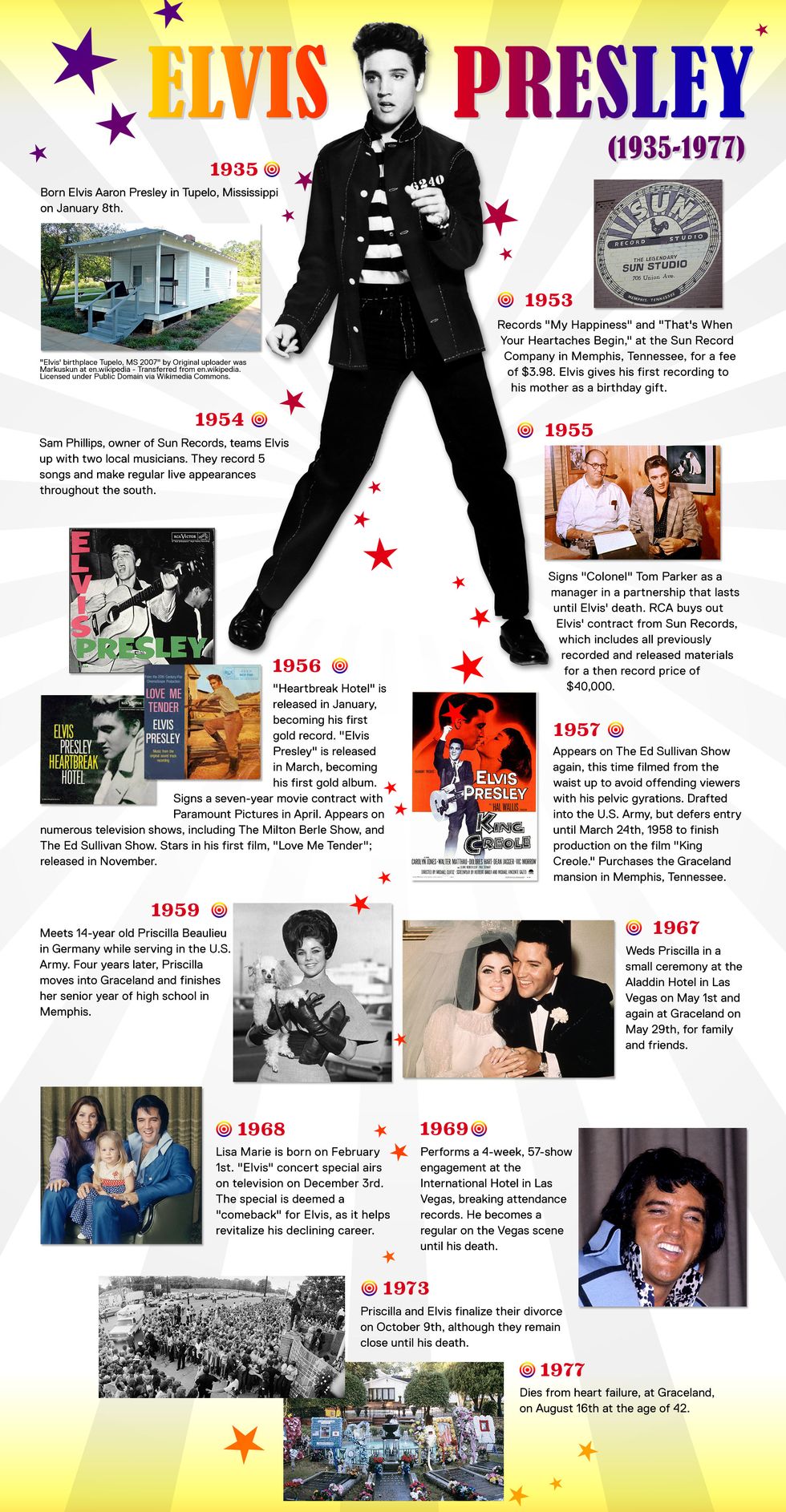 Since his death, Presley has remained one of the world's most popular music icons. Over the years, several documentaries and films have explored the enigmatic performer, including a 2005 television miniseries starring Jonathan Rhys-Meyers as Elvis. In 2018, a two-part documentary, Elvis Presley: The Searcher, was released and explores his early life, rise to fame and his myriad musical influences.

That year, the online auction site IronPlanet announced that a private jet once owned by Presley and his father was on the market. The red 1962 Lockheed Jetstar, which has sat idle on a New Mexico runway for decades, features an interior with gold-tone woodwork and red velvet seats but has no engine. The previous owner purchased the jet in 2017 for $430,000.

Another 2018 auction, held at the Guest House at Graceland and online, featured more than 200 keepsakes from third-party collectors which were all once owned, used and signed by the King himself. The highest-priced item, a 1942 Beretta M1934 pistol given to Presley by General Omar Bradley, sold for more than $51,000.