The news headlines presented a surreal impression of what was almost an alternative universe:

It almost seemed unbelievable. Early news reports were short, incomplete and confused. But what was unmistakably clear on the afternoon of August 16, 1977, was that Presley, the “greatest rock and roll performer in the world” had died. How could this be? We just saw him on TV performing from Vegas. What did they say it was? A heart attack? Really? That’s unbelievable! He was only 42.

Many a celebrity is subject to a reversal of fortune with an untimely death. All that was once good about the person now becomes bad. Virtues give way to vices. Character takes a back seat to calamity. Though Presley’s cause of death was originally claimed to be a heart attack, later toxicology reports identified high levels of several pharmaceutical drugs in his system. Many doubted it. After all, President Richard Nixon had met with Elvis and given him a badge from the Bureau of Narcotics and Dangerous Drugs. (There’s a photo to prove it.) Others just accepted the story as another drug-related death of a rock and roll star. How the cause of death changed from heart attack to prescription-drug poisoning typifies the pattern of a celebrity’s fall from grace. 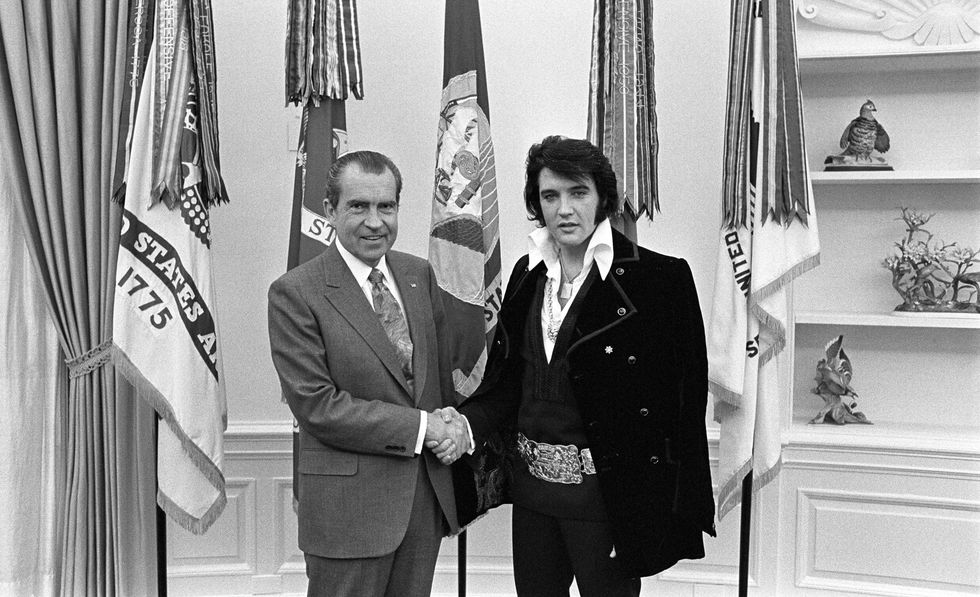 President Richard Nixon and Elvis Presley meet in the Oval Office of the White House in 1970.
Photo: The National Archives

It was mid-August, 1977. Elvis Presley was at his Graceland mansion in Memphis, Tennessee, resting between concert appearances. Sometime near 2:30 p.m., his girlfriend, Ginger Alden, found him lying face down on the floor of his spacious bathroom. At 2:33 p.m., a call came into Memphis Fire Station No. 29 indicating that someone at 3754 Elvis Presley Boulevard was having difficulty breathing. Ambulance Unit No. 6 sped out of the station and headed south. While not a routine trip, local ambulances had made numerous visits to Graceland over the years to take care of fainting fans or pedestrians hit by cars along the crowded sidewalks in front of the mansion. From time to time, the mansion’s owner has also sped away in an ambulance to receive emergency medical treatment.

Within a few minutes, the ambulance neared Graceland. The vehicle made a hard left through the opened iron gates and up the curved driveway to the white-columned portico. One of Presley’s bodyguards allowed the two medics to enter the mansion. With equipment in hand, they rushed up the stairs to the bathroom where they encountered nearly a dozen people huddled over a man in his pajamas, lying prostrate on his back. The medics quickly moved in. Initially, they didn’t recognize the victim, but then noticed the thick, graying sideburns and the large medallion around the neck and realized it was Elvis Presley. His skin was dark blue and cold to the touch. Checking for vital signs, the medics detected no pulse and no response to light from his pupils. They quickly prepped him for transport.

It took several men to lift Presley onto the stretcher. He was obese, almost bloated. The unbalanced distribution of weight made navigation difficult around corners and down the stairs. As the medics loaded Presley into the ambulance, a stocky man with white hair, leaped into the back just as the doors closed. Dr. George Nichopoulos, Presley’s doctor, affectionately known as Dr. ”Nick”, ordered the driver to take Elvis to Baptist Memorial Hospital, 21 minutes from Graceland. It was not made clear at the time why he didn’t say Methodist South Hospital, which was only 5 minutes away. But Dr. “Nick” knew the staff at Baptist Hospital was discrete.

At the hospital, emergency personnel made valiant efforts to revive Presley, but without success. He was pronounced dead at 3:30 p.m. Hospital officials understood that their actions over the next few hours would be crucially important in preparing an official announcement. A highly skilled team of nine doctors, headed by the hospital’s chief of pathology, Dr. E. Eric Muirhead, would conduct the autopsy. During the procedure, doctors found no signs of stroke, heart failure, or lung disease. They saw evidence that Presley was chronically ill with diabetes and constipation. Physical evidence indicated possible, long-term use of drugs, but toxicology tests would have to confirm that. After the autopsy, Elvis’s body was released to the funeral home. 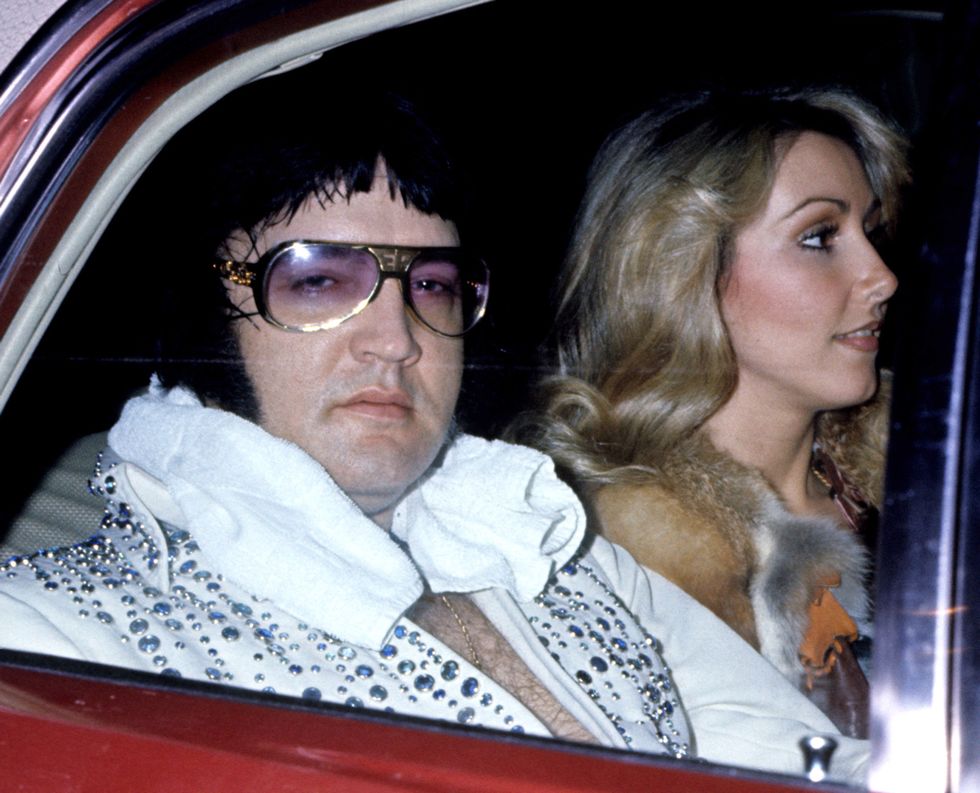 Elvis Presley with girlfriend Linda Thompson arrive at the Hilton Hotel in Cincinnati after a concert in 1976.
Photo: Tom Wargacki/WireImage/Getty Images

At 8:00 p.m. that same day, a press conference was held. Medical examiner Dr. Jerry Francisco took control as spokesperson for the autopsy team, even though he had only witnessed the procedure. He announced that early tests indicated Presley’s cause of death was a cardiac arrhythmia due to undetermined heartbeat, i.e. heart failure. Dr. Muirhead and the other members of the autopsy team were stunned. Not only had Dr. Francisco presumed to speak for the hospital, but his conclusion did not match their findings, which was that they hadn’t made a conclusion as to the cause of death but believed drug addiction was a probable cause. Dr. Francisco went on to say that determining the official cause of death would take days or even weeks, but that drugs were absolutely not a factor and that there was no evidence of drug abuse, which most people at the time believed meant illegal street drugs.

For a time, most people accepted this finding. But the toxicology report that came out weeks later revealed high levels of pharmaceutical painkillers such as Dilaudid, Quaalude, Percodan, Demerol, and codeine in Elvis’s body. The Tennessee Board of Health began an investigation into Presley’s death and initiated proceedings against Dr. “Nick.”

During the hearings, evidence was presented that Dr. Nichopoulos had written prescriptions for more than 8,000 doses of medication since 1975 and that the pattern had been escalating since then. During the hearings, Dr. Nichophoulos admitted to writing the prescriptions. In his defense, he claimed that Elvis was so addicted to pain killers that he prescribed the medications to keep Elvis away from dangerous and illegal street drugs, trying to control his addiction. The jury agreed with the doctor’s rationale and absolved him of negligence in causing Presley’s death. In 1980, Dr. Nichophoulos was indicted again for overprescribing drugs to Presley and singer Jerry Lee Lewis, but was acquitted. However, his questionable medical practice caught up with him and in 1995, the Tennessee Board of Medical Examiners permanently suspended his medical license for overprescribing drugs to his patients.

On August 17, 1977, the doors of Graceland were opened for public viewing of “The King’s” body and Presley instantly passed from music legend to cultural icon. Crowds had gathered early that day and quickly grew to an estimated 100,000. The mourners ranged from pre-teens to middle-aged and older men and women. Many expressed genuine, open sorrow over his death. Others were more upbeat, almost festive, and eager to be part of the cultural history. Due to the extreme temperatures that day, the showing was cut short for fear the heat and humidity would disfigure Elvis’ body.

Elvis's grave at the family plot on the Graceland property.">

On August 18, 1977 a funeral procession of 17 white Cadillacs and a hearse carrying the body of of the “King of Rock and Roll” slowly made its way from Graceland to Forrest Hill Cemetery. Under heavy guard, a simple ceremony was conducted. Present were Elvis’ former wife Priscilla, and his daughter Lisa Marie, his father Vernon, and Minnie Mae Presley, Elvis' paternal grandmother. Several celebrities, including Chet Atkins, Ann-Margret, Caroline Kennedy, James Brown, Sammy Davis, Jr. and of course Colonel Tom Parker, who had guided and gilded Presley’s career from the start. Elvis was laid to rest in a mausoleum alongside his mother, Gladys. The King of Rock and Roll was dead and there was no other king to take his place. In his 20-plus years as celebrity entertainer, Elvis Presley had become a defining force of the times. 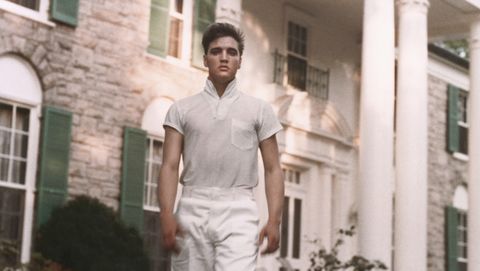