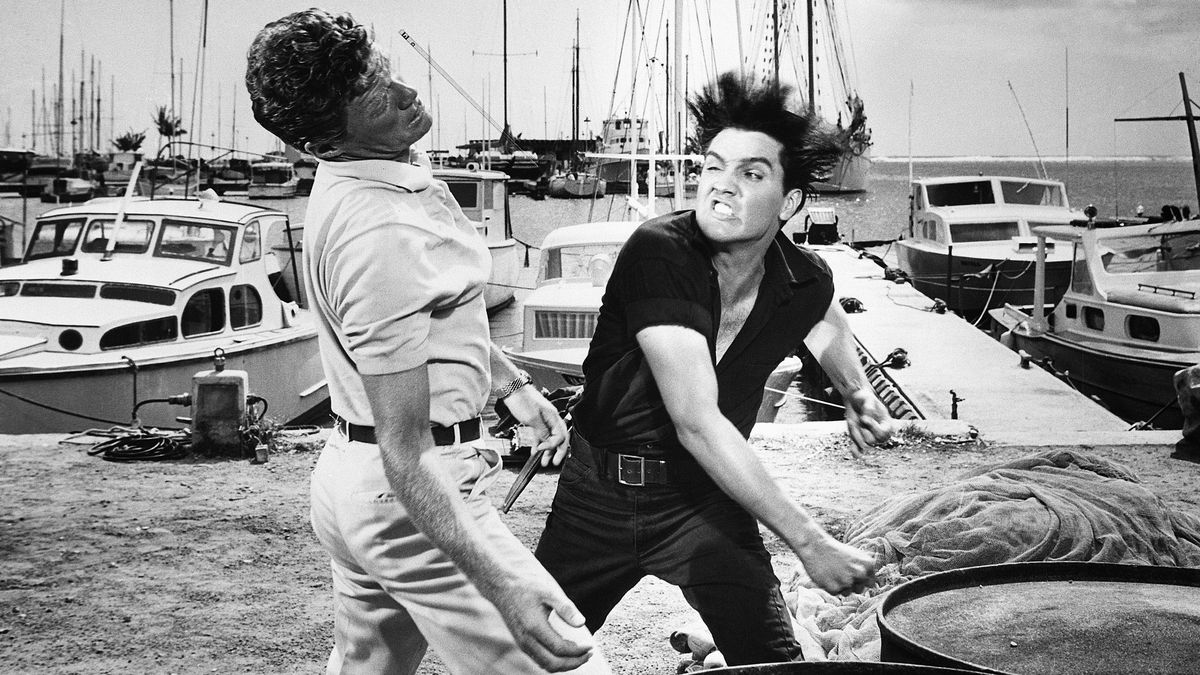 Rock 'n' roll icon Elvis Presley made 31 movies between 1956 and 1969, of which 27 were produced in the 1960s. Almost all of Presley's films were box-office smashes that made him, his manager and movie studios a lot of money. However, these films were critically derided, and Presley disdained most of them. After he left Hollywood behind, he said in private, "It was just that Hollywood's image of me was wrong, and I knew it and couldn't say anything about it." 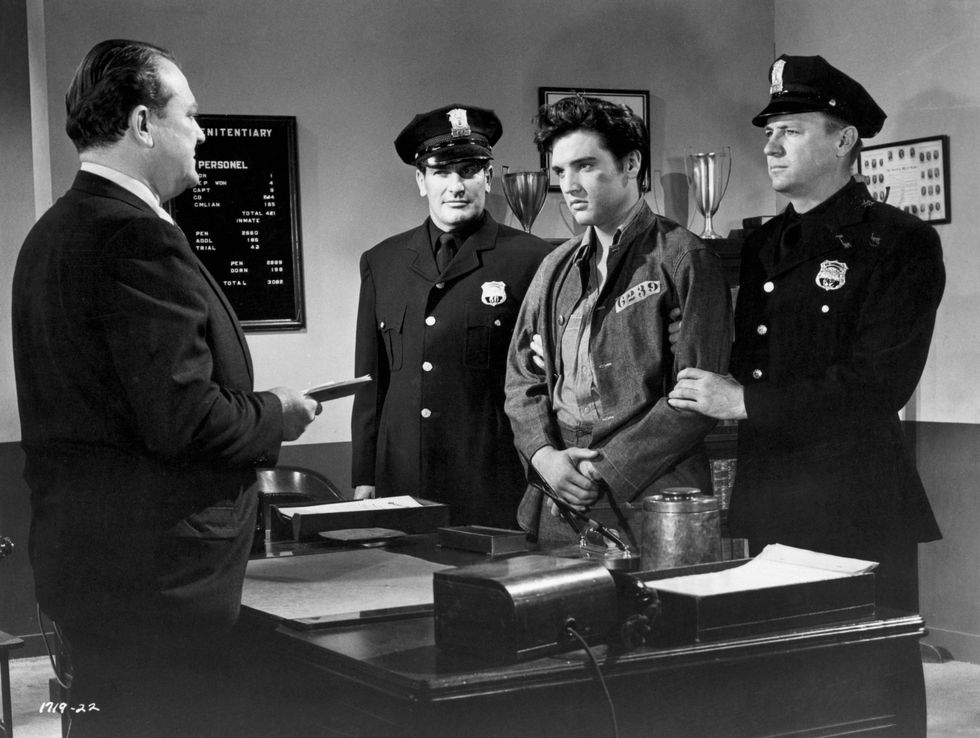 Elvis Presley is held by guards Carl Sax (left) and Hubi Kearns (right) as Warden Hugh Sanders prepares to sentence him for creating a prison disturbance in a scene from the 1957 film ’Jailhouse Rock.’
Getty Images / Bettmann / Contributor

When Did Elvis Go to Hollywood?

By 1956, Elvis Presley had become a musical phenomenon. Amid screaming, adoring fans, he'd ushered in a new era of rock 'n' roll. He had hit records, and his television appearances were ratings bonanzas. Putting Presley in movies was the next logical step.

Presley was excited about Hollywood. He'd grown up watching movies and, inspired by singers who'd transitioned into films like Bing Crosby and Dean Martin, dreamed of movie stardom. He told Life magazine, "I want to become a good actor because you can't build a whole career on just singing. Look at Frank Sinatra. Until he added acting to singing, he found himself slipping downhill."

Presley made his film debut in Love Me Tender (1956), a Civil War western. He took the job seriously enough to memorize the entire script before shooting. The movie became a hit and was quickly followed by other films, including Jailhouse Rock (1957).

Elvis Leaves Hollywood for the Army

In 1957, the U.S. Army drafted Presley. He was able to delay his enlistment to finish King Creole, a film in which he portrayed a young singer who must overcome poverty and organized crime.

Presley was concerned that being away in the army would damage his career. Parker, his manager, reassured the star: "Elvis, you have records that haven't been released and a movie in the can. We can stretch out the product we have. There'll be a certain dark period, but that will only double the demand for your records and movies once you get out of the service."

In March 1958, Presley began serving in the army. In the meantime, his movies helped keep him in the public eye. King Creole was released in 1958, then was re-released along with Love Me Tender in 1959. And while Presley was in Germany, he got the script for his next movie, G.I. Blues (1960). Producer Hal Wallis also arranged for footage to be filmed in Germany—though Presley himself didn't film any scenes.

After Presley's discharge in 1960, Parker wanted the star to focus on movies, which offered the largest paychecks. The only question was: What kind of films was Presley going to make? He'd acquitted himself well in King Creole. Costar Walter Matthau later said, "He was intelligent enough to understand what a character was and how to play the character simply by being himself through the means of the story."

For the 1960s film Flaming Star, Presley took on a role that had been written for Marlon Brando and delivered a respectable performance as a half-white, half-Indian man. After making Flaming Star, Presley said, "I'd like to do a little more of a serious role. Because my ambition is to progress as an actor."

However, Flaming Star was not as successful as G.I. Blues, which came out the same year. As a result, Parker encouraged Presley to focus on the successful movie formula that called for him to sing in various exotic locations; this resulted in a huge success with Blue Hawaii (1961).

Elvis Was Disappointed by His Films

Presley was aware that pictures like Girls! Girls! Girls! (1962) were not great cinema and dubbed his films "travelogues." He wanted better roles, but Parker reportedly turned down parts in movies such as West Side Story and Midnight Cowboy. However, Presley never took acting lessons and was perhaps not entirely focused on altering the arc of his career.

Presley continued to appear in formulaic movies, for which the studios paid him well. He earned $500,000 or more per picture and a percentage of the net profits. The lackluster Kissin' Cousins (1963), which starred Presley in dual roles, demonstrated that an Elvis film would make money even when production was rushed. The movie shot in 17 days under the aegis of a producer nicknamed "King of the Quickies."

Though still part of the "Elvis genre," Viva Las Vegas (1964) was a higher-quality affair. However, that shoot ran long, which cut into the movie's profits. After this, Parker pushed for short productions, with just two or three weeks of filming, because it boosted the bottom line. This resulted in pictures like Harum Scarum (1965), which exhibitors deemed "Presley's worst movie yet" (and that was without the talking camel that Parker had unsuccessfully tried to add to the film). Still, being seen as a bad movie didn't prevent it from being profitable.

Presley's movies performed so well that they spared the studio Allied Artists from bankruptcy. Producer Wallis also said Presley's films were bankrolling more "artistic pictures." Presley didn't like hearing this, but he needed Hollywood money to fund his lifestyle.

Hollywood had Presley compromise his artistic integrity in other ways. Though he made a few non-film recordings, most of his musical talent was used to create soundtracks with subpar songs. He stopped giving live performances around 1961. As rock music changed in the 1960s with the Beatles, the Beach Boys and Bob Dylan, Presley's creativity floundered.

In 1965, Presley met with the Beatles. In one version of their encounter, John Lennon asked, "Why don't you go back to making rock 'n' roll records?" Presley supposedly answered, "It's my movie schedule. It's so tight."

Why Did Elvis Stop Acting?

By 1968, box-office revenue declined as audiences finally tired of Presley's low-quality films. Presley, who'd become dissatisfied with his Hollywood career, told Parker he wanted to re-focus on music. In December 1968, Presley's TV Christmas special demonstrated the talent and musical ability that had made him a star in the first place.

Change of Habit (1969) was Presley's last feature film. He was later offered a starring role opposite Barbra Streisand in A Star Is Born (1976), but the part fell through. It's unsure what exactly went wrong; in one version of the story, Parker undermined his star by making unreasonable demands.

Presley spent much of the 1970s singing to devoted crowds. Yet as the decade progressed, there were more and more cancellations. Presley died on August 16, 1977 at the age of 42. His time spent in Hollywood, good and bad, is now one of the ways his legacy lives on.