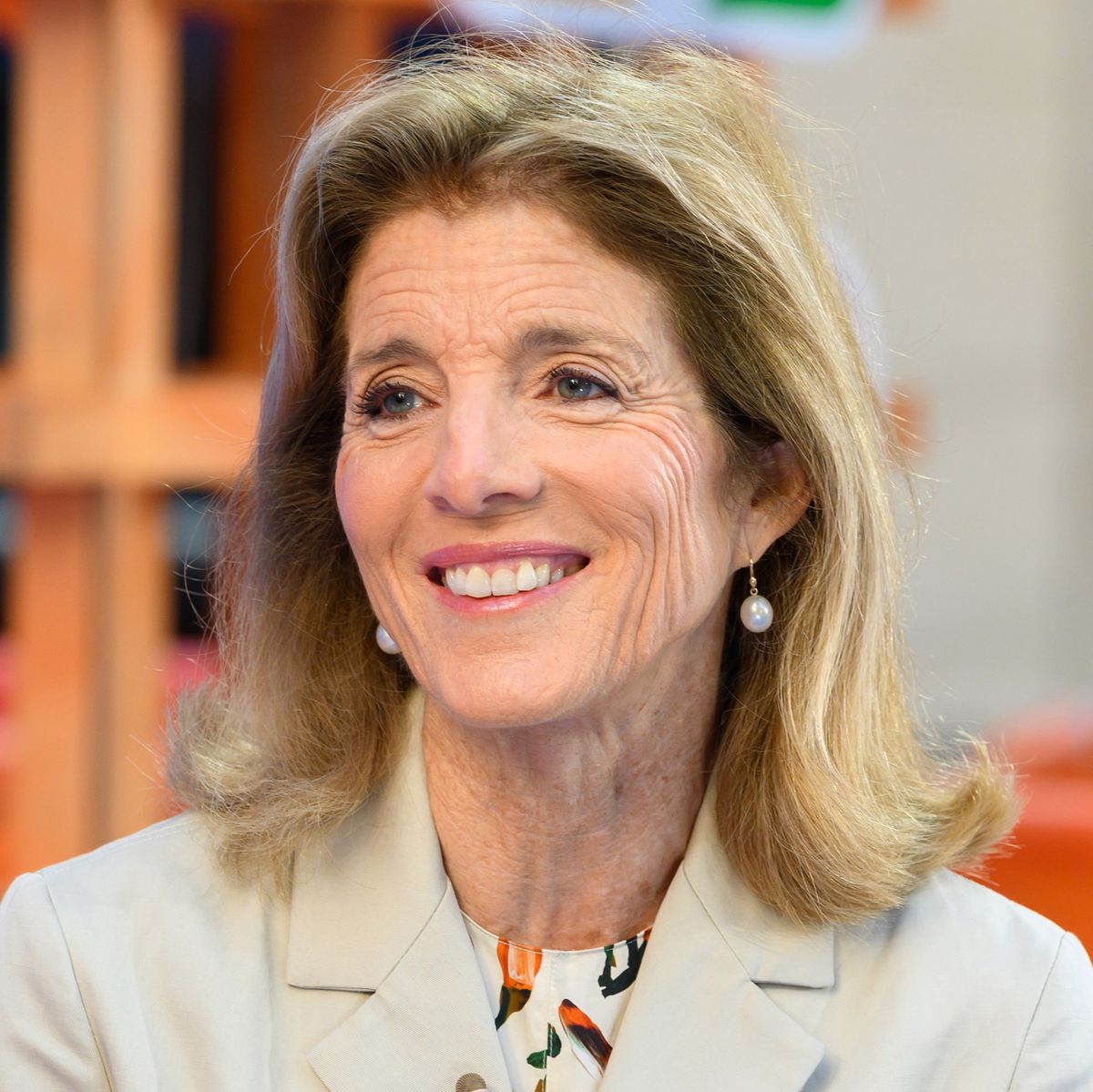 Who Is Caroline Kennedy?

Born in New York City on November 27, 1957, Caroline Kennedy is the only surviving child of John F. Kennedy and Jacqueline Kennedy Onassis. She spent her early years living in the White House during her father's term as president, and is known for being the most private member of the famous Kennedy family. A lawyer and author, Caroline has co-written and edited several books. In July 2013, she was nominated U.S. ambassador to Japan by President Barack Obama.

Caroline Bouvier Kennedy was born on November 27, 1957, in New York City, to Jacqueline Kennedy Onassis and John F. Kennedy. Caroline spent her early years living in the White House during her father's term as president. His time in office is often referred to as the "Camelot Presidency" for the hope and optimism the young politician brought to America. As a result, the Kennedys were thrust into the spotlight as the ideal American family. Caroline was a frequent media darling; people couldn't get enough of the little girl who walked her father to the Oval Office each morning, and rode her pony on the White House lawn.

Not everything in the Kennedy household was idyllic, however, and the family suffered numerous tragedies. Among them were Jackie's miscarriages, one occurring 15 months before Caroline was born and another three years later on August 7, 1963; a premature baby boy, whom the Kennedys named Patrick. But chief among the losses that affected Caroline directly came on November 22, 1963, when her father was assassinated by sniper fire. Caroline was not yet six years old at the time. The iconic image of her holding her mother's hand and her brother John Jr. saluting John F. Kennedy's flag-draped coffin during the nationally televised funeral procession remains one of the most tragic moments in American presidential history.

Two weeks after the assassination, Jackie and the children moved out of the White House and into a home in Georgetown. However, life grew difficult for the Kennedy clan with an ongoing circus-like atmosphere of media and curious onlookers descending on their home. By the summer of 1964, the family moved to New York City. There, the family enjoyed some degree of anonymity and less aggressive paparazzi. That September, like generations of Kennedy women before her, Caroline was enrolled in the Sacred Heart School.

By the late 1960s, the family had established a quiet New York City life. But in 1968, Caroline and John Jr.'s lives were shattered again with the assassination of their beloved uncle and U.S. Senator, Robert F. Kennedy. Jackie became frightened for the safety of her children. Four months after Bobby’s death, Jackie married Greek Shipping magnate, Aristotle Onassis. Onassis would shower Caroline and her brother with gifts, but Caroline couldn’t quite accept him and there were also tensions between his children and Jackie. Caroline often turned to her uncle, U.S. Senator Edward "Ted" Kennedy, for comfort and the two became very close.

Onassis provided security for the family when they were in New York. During vacations and breaks, the family would spend time in Greece, or sailing their yacht around the Caribbean. In 1969, Caroline enrolled at The Brearley School, an exclusive all-girls school on the tony Upper East Side of Manhattan, where she excelled as a student and as a budding photographer. She next attended Concord Academy in Massachusetts; it was the first time she lived away from her mother. During this time, Jackie’s marriage to Onassis began to unravel. Her stepfather was devastated by the loss of his 24-year old son Alexander, who had died after a plane crash in 1973. Aristotle Onassis died in March 1975. After his death, Jackie moved back to New York City permanently and went to work as an editor at Viking Press. She continued to try and shield her children from the public eye, often keeping them away from their rebellious, scandal-making cousins.

Growing Up in the Spotlight

As a result of their mother's guidance, Caroline and her brother stayed away from drugs and alcohol, instead becoming conscientious students. Caroline performed well in New York private school, and went on to attend Radcliffe College (now part of Harvard) for her undergraduate studies. In addition to her courseload, the young Kennedy interned for the New York Daily News and worked in the summers as a political intern for her uncle, Ted Kennedy.

After earning her bachelor's degree in 1980, Caroline worked at the Metropolitan Museum of Art where she met her future husband, an interactive-media designer named Edwin Schlossberg. She also began serving as president of the John F. Kennedy Library Foundation, a nonprofit organization dedicated to providing financial support, staffing and creative resources to the John F. Kennedy Presidential Library and Museum.

On July 19, 1986, Caroline Kennedy married 41-year-old Schlossberg in an elaborate Cape Cod, Massachusetts wedding. Despite the family's efforts to avoid publicity, the wedding became a topic of wide interest in the media. A crowd of more than 2,000 spectators surrounded the church and a nearby hillside.

Interested in politics, but not the limelight, Caroline quietly entered Columbia Law School. She graduated with little fanfare in 1988, during a private pre-commencement ceremony along with 380 other students. That same year, she gave birth to her first child, Rose. In 1989, the young lawyer stayed busy by establishing the Profile in Courage Awards, which honors elected officials who have shown political courage. She also began research on her first book.

Fascinated with constitutional law, Caroline co-wrote In Our Defense: The Bill of Rights in Action with fellow law graduate Ellen Alderman. She refused to use her mother's publishing industry contacts, instead publishing the book through William Morrow & Co. in February 1991. She also surprised Washington officials and stumped the media the next year, when she turned down an offer to be chairwoman of the 1992 Democratic National Convention. Instead, the private Kennedy invested time in her family and personal projects.

In 1994, Jackie Kennedy passed away after a long battle with lymphatic cancer. As a tribute to her mother's work in the arts, Caroline took on Jackie's role as the honorary chairperson at the American Ballet Theatre. In addition to her charitable work, Caroline co-wrote another book entitled The Right to Privacy (1995). She also took up her role as the guardian of the Kennedy name, spending several difficult months trying to settle her mother's $200 million estate while under heavy public scrutiny.

In 1998, Caroline and her brother went public in an auction dispute against Evelyn Lincoln, President John F. Kennedy's former secretary, who attempted to sell "intensely personal" pieces of memorabilia that belonged to their father.

On July 16, 1999, Caroline endured more hardship when her only sibling, brother John F. Kennedy Jr., was killed along with his wife and sister-in-law, in a plane crash near Martha's Vineyard, Massachusetts. While the tragedy's effect on Caroline was kept private, the only remaining heir to the Kennedy legacy quickly took up the family mantle. In 2000, she finally agreed to become a speaker at the 2000 Democratic National Convention.

She also kept writing. To honor her late mother, Caroline Kennedy helped create The Best-Loved Poems of Jacqueline Kennedy Onassis, published in 2001. She has also served as editor for two other anthologies: Profiles in Courage for Our Time (2002) and A Patriot's Handbook: Songs, Poems and Speeches Every American Should Know (2003). She published A Family of Poems: My Favorite Poetry for Children in 2005, and her latest work, A Family Christmas, in 2007.

Caroline Kennedy serves as a member of the national board of directors for the NAACP Legal Defense and Educational Fund, vice chair for the Fund for Public Schools in New York City, and chief executive for the New York City Department of Education Office of Strategic Partnerships.

In 2008, the famously private Caroline Kennedy made headlines when she was rumored as a possible candidate for Hillary Clinton's vacant Senate seat. Caroline later withdrew her bid for the post, citing personal reasons.

On July 24, 2013, Caroline was nominated U.S. ambassador to Japan by President Barack Obama, putting to rest much speculation in the media regarding her likelihood to win the title. She was officially approved by the U.S. Senate in October. Caroline succeeded John Roos, who had served as Japan's U.S. ambassador since August 2009. Among those to formerly hold the role are Walter Mondale, Howard Baker and Tom Foley.

Watch the full biography of Caroline Kennedy on HISTORY Vault