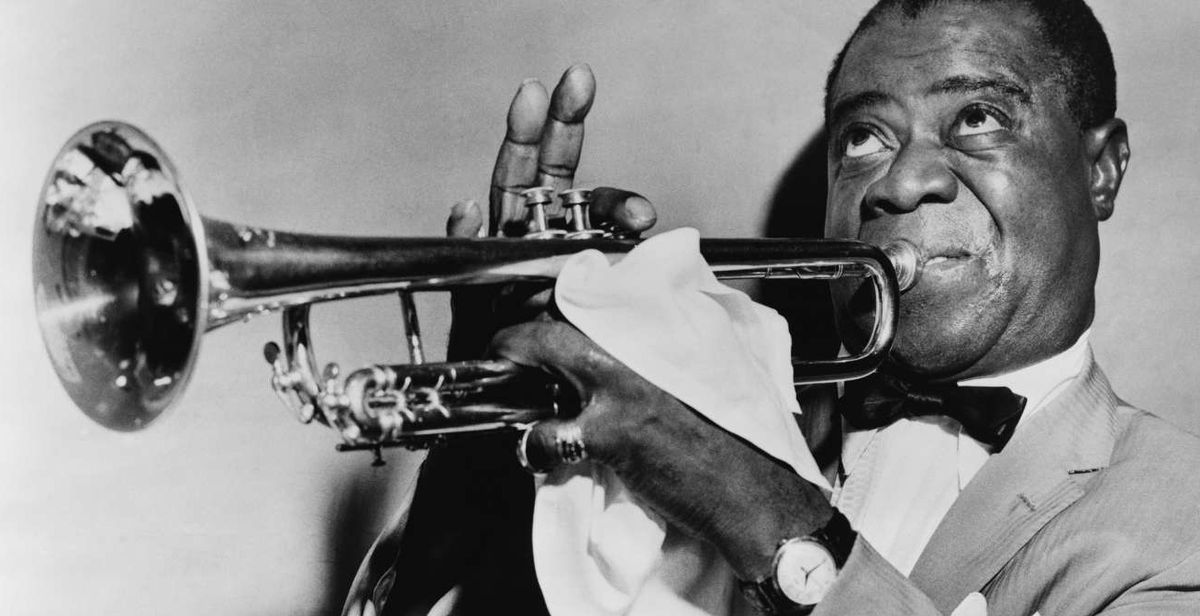 Jazz musician Louis Armstrong is remembered not only for his hundreds of recordings but as a lovable and humorous character who appeared in a wide swath of Hollywood films and TV shows. Many listeners identify him with the heartwarming ballad “What A Wonderful World” or the joyful “Hello Dolly.” But in the history of American and world music, he was much, more more.

Armstrong had rough beginnings and was sent to an orphanage

Armstrong was born in a poor area of New Orleans. His mother raised him as best she could after his father abandoned the family when Armstrong was a baby. As a youth, he often sang on the streets in a vocal group for pennies. He loved hearing the many brass bands that filled the city and got excited whenever a parade was nearby. Armstrong did odd jobs for a local Jewish family that loved him and bought him his first cornet when he was 10.

On New Year's Eve of 1912, Armstrong shot a pistol in the air in celebration. He was immediately arrested and, when the court decided that his mother could not raise him properly, was sent to a Waif’s Home for orphans. Life looked bleak for the youngster but music turned out to be his salvation. 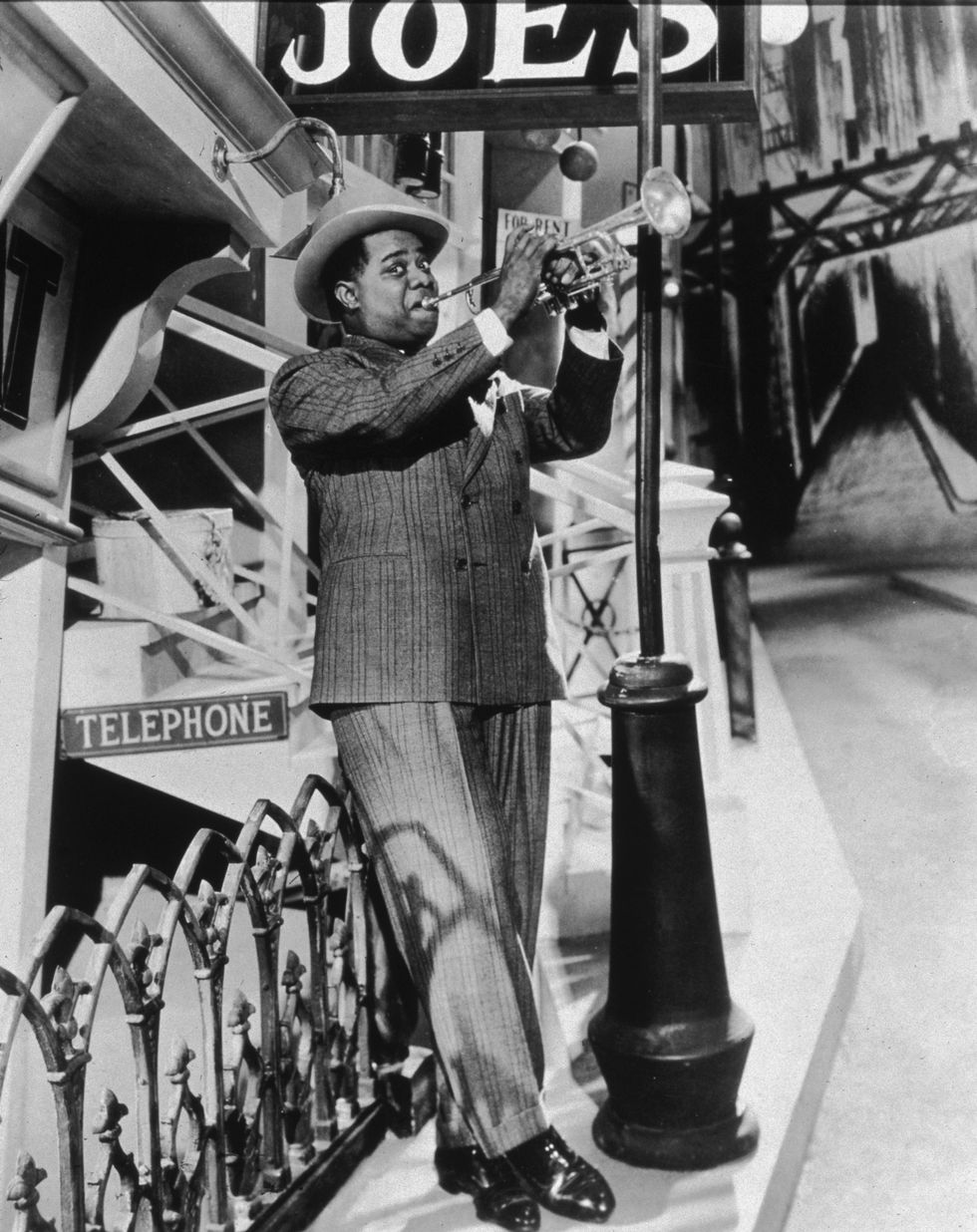 New Orleans native Louis Armstrong moved to New York City in 1924, where he played the clubs and on Broadway, helping to spread the sound of jazz to a larger audience.
Photo: Museum of the City of New York/Getty Images

The disciplined atmosphere and the Waif’s Home inspired young Armstrong to work hard on mastering the cornet. When he was released two years later, he was considered a promising musician. Armstrong idolized cornetist Joe “King” Oliver, one of New Orleans’ top musicians who became a father figure for the teenager. When Oliver moved up North in 1918, he recommended that the youngster get his spot with trombonist Kid Ory's pacesetting band. Armstrong improved rapidly, learning to read music while playing on riverboats with Fate Marable’s group. In 1922 when Oliver decided to add a second cornetist to his Creole Jazz Band, which was based at the Lincoln Gardens in Chicago, he sent for his protégé.

By then, Louis Armstrong had a beautiful tone, wide range and exciting style on the cornet. Early New Orleans jazz was primarily an ensemble-oriented music. King Oliver’s Creole Jazz Band featured four horns playing nearly all of the time, with individual heroics being largely confined to brief two or four-bar breaks and very rare one-chorus solos. Because Oliver was the lead cornetist and took care of the melody, Armstrong was mostly featured playing harmonies in ensembles, adding to the power of the group while going out of his way not to outshine its leader. However it was soon apparent to the other musicians, including pianist Lil Harden (who would soon become Armstrong’s second of four wives), that he would not be the second cornetist to anyone for long.

Armstrong changed the way jazz soloists were highlighted in the band

In 1924 Lil Armstrong persuaded her new husband to accept an offer to go to New York and join the Fletcher Henderson Orchestra. Henderson had the top Black band of the era although his orchestra, while possessing fine musicians and excellent sight-readers, had not yet learned how to swing. This is where Armstrong began to change the direction of jazz.

At the time, most jazz soloists only made brief statements, emphasizing staccato phrases, staying close to the melody and often punctuating their solos with double-time phrases that were repetitive and full of effects. At Armstrong’s first rehearsal with Henderson, the other musicians initially looked down on the newcomer because of his out-of-date clothes and rural manners. But their opinions changed as soon as Armstrong played his first notes. As a cornetist (he would switch permanently to trumpet in 1926), Armstrong’s utilized legato rather than staccato phrasing. He made every note count, used space dramatically, built up his solos to a climax and “told a story” in his playing. In addition, he put a blues feeling into every song, his expressive style was voice-like and tone was so beautiful that he helped to define the sound of the trumpet itself.

It was largely due to Armstrong's powerful playing that jazz changed into a music that put the focus on brilliant and adventurous soloists. During his year with Henderson, Armstrong became a major influence not only on other brass players but on musicians of all instruments. His swinging solos were emulated by others and, by the time he moved back to Chicago in late-1925, jazz had moved a decade ahead of where it was in 1923. Soon there were many trumpeters who sounded like relatives of Armstrong. It was not until the bebop era began twenty years later that jazz trumpeters, inspired by Dizzy Gillespie and Miles Davis, moved beyond Armstrong to look for other musical role models.

During 1925-28, Armstrong’s recordings with his small groups (the Hot Five, Hot Seven and his Savoy Ballroom Five), revolutionized jazz, containing some of his most brilliant trumpet playing. Those timeless sessions also introduced Armstrong as a singer. Before Armstrong, most vocalists who recorded were chosen due to their volume and ability to articulate lyrics clearly, singing in a very straight and square manner. In contrast, Armstrong’s gravelly tone was distinctive from the start and he phrased like one of his horn solos. "Heebies Jeebies," from 1926, while not the very first recording of scat-singing (which utilizes nonsense syllables instead of words), greatly popularized scatting. The legend was that, after singing a chorus of the lyrics during the recording session, Armstrong dropped the music and had to make up sounds instead since he had not memorized the words, thereby inventing scat singing. It is a great story but the smoothness of Armstrong’s singing throughout the record (there is never a sense of panic) makes one think that the mishap happened on an earlier version of the song and it was decided to keep it in the routine. In any event, the first scat singing on record had already occurred 15 years earlier.

In addition to popularizing scatting, Armstrong’s relaxed phrasing in his singing, which like his trumpet playing made perfect use of space, was a revelation to other vocalists. He altered melody lines to give them catchier rhythms, and changed lyrics when it suited his voice and his conception of the song. Among those who became influenced by his phrasing while adapting it to their own musical personalities were Bing Crosby (who brought jazz phrasing into pop music), Billie Holiday, Cab Calloway and Ella Fitzgerald among countless others.

Armstrong often stole the show with his electric performances

While his small group recordings of 1925-28 made Armstrong a sensation among instrumentalists and singers, altering the course of jazz, it was in a third area that Armstrong became world famous. In 1929 he began recording regularly with a big band and was usually heard in that setting up until 1947. Rather than mostly performing jazz originals and New Orleans standards as earlier, Armstrong explored popular songs from the Great American Songbook, changing the compositions of Gershwin, Porter, Berlin, Rodgers and others into jazz through his interpretations.

As the dominant star of his performances and recordings, Armstrong was free to display his humorous personality much more. When it came to being an entertainer, Armstrong (who became universally known as “Satchmo”) was impossible to top. He could steal the show from anyone with his comedic abilities, lovable personality and musical brilliance. He became an international star, a household name who visited Europe a few times during the 1930s. When he broke up his big band in 1947, he formed a sextet called The Louis Armstrong All-Stars that made it possible economically for him to become a world traveler. His popularity grew steadily during his last 24 years and Armstrong became famous as jazz’s goodwill ambassador, even being nicknamed "Ambassador Satch." His recordings sold very well and such hits as “Blueberry Hill,” “Mack The Knife” and 1964’s “Hello Dolly” kept him famous and busy.

As the most accessible of all jazz performers and a universally beloved figure, Armstrong introduced jazz to a countless number of listeners while symbolizing the music for millions. His importance to jazz, whether through his solos, singing or ability to win over listeners, cannot be measured. The history of jazz, American music and music in general would be much different if there had not been Armstrong.