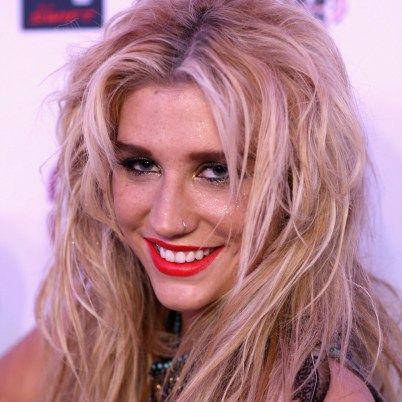 Kesha's big break came from an uncredited and unpaid cameo on rapper Flo Rida's 2009 No. 1 hit "Right Round." Soon after, she landed a record contact with RCA and released her first single, "Tik Tok." The party anthem developed quite a following. Her debut album, Animal, reached the top of the charts after its release in January 2010. Her second album, Warrior, was released in 2012. In 2014, Kesha began her legal battle with producer Dr. Luke over charges that he allegedly sexually assaulted and harassed her.

Singer and songwriter Kesha was born Kesha Rose Sebert on March 1, 1987, in Los Angeles, California. She was exposed to music at an early age through her mother Pebe, a songwriter. Her mother's biggest songwriting success was "Old Flames Can't Hold a Candle to You," which was a hit for Joe Sun and Dolly Parton.

The first few years of Kesha's life were a struggle for her family. Her mother had difficulty earning enough to support Kesha and her older brother. "We were on welfare and food stamps," the artist explained on her website. "One of my first memories is my mom telling me, 'If you want something, just take it.'" When she was 4, Kesha moved to Nashville with her family, where her mother had landed a songwriting contract.

Sometimes tagging along with her mother, Kesha spent a lot of time in recording studios during her early adolescence. Her mother encouraged her interest in singing, allowing Kesha to work on some of her song demos. Kesha also went to a music school, where she learned about songwriting. Deep in the heart of the country music scene, she was inspired by the likes of Johnny Cash and Patsy Cline.

Pursuing a Career in Music

At 17, Kesha left high school to pursue a music career. She changed her name to Kesha and moved to Los Angeles to work with producer Dr. Luke, who had worked on hit singles for Katy Perry and Kelly Clarkson among others. "I thought her voice was distinctive, and I fell in love with her personality," Dr. Luke explained to Entertainment Weekly. "She had the same sass and irreverence she has now."

Kesha was determined to break into the business. According to one story, she paid off a gardener to get inside music legend Prince's house to leave one of her demos for him. She landed a few gigs as a back-up vocalist as well, performing on songs by Britney Spears and Paris Hilton. But her big break came from an uncredited and unpaid cameo on rapper Flo Rida's 2009 No. 1 hit "Right Round." She told Allure magazine that she wasn't upset about not receiving any payment for the song. "You have to pay your dues," she explained.

Soon after her work with Flo Rida, Kesha landed a record contact with RCA. She released her first single, "Tik Tok," later that year. The party anthem developed quite a following, soon becoming one of the most downloaded songs in America, and then reaching the top of the Billboard pop charts in January 2010.

Because she has attracted many young fans, Kesha has been criticized for some of her lyrics, especially those focused on drinking and alcohol. "I'm not a babysitter," the singer said. "It's their parents' responsibility to take care of them." For Kesha, her life provides much of the inspiration for her songs. "I'll go out with my friends and get rowdy . . . I'm not sorry, and I will write about it."

Her debut album, Animal, reached the top of the charts after its release in January 2010. In addition to "Tik Tok," Kesha scored two more Top 10 hits: "Blah Blah Blah" and "Your Love Is My Drug." Accompany this work was the extended play release Cannibal. She followed up her initial success with 2012's Warrior, which featured the single "Die Young." A companion extended work, Deconstructed, was released in 2013.

Kesha experienced some personal challenges during 2014. In January, she sought treatment for an eating disorder. Kesha, later that year, filed a lawsuit against producer Dr. Luke, stating that he sexually harassed and assaulted her among other claims. Dr. Luke, in turn, has sued Kesha and her mother for defamation.

During this difficult time, Kesha has received support from other artists, including Adele and Lady Gaga. Taylor Swift even donated $250,000 to the young singer after a February 2016 court decision that refused to grant Kesha an injunction that would have freed her from her contract to Dr. Luke's label at Sony Music.

While the court denied Kesha's request, it is apparent that Sony Music has been trying to fix the situation. A lawyer for Sony Music told the New York Times that “Sony has made it possible for Kesha to record without any connection, involvement or interaction with Luke whatsoever, but Sony is not in a position to terminate the contractual relationship between Luke and Kesha.”