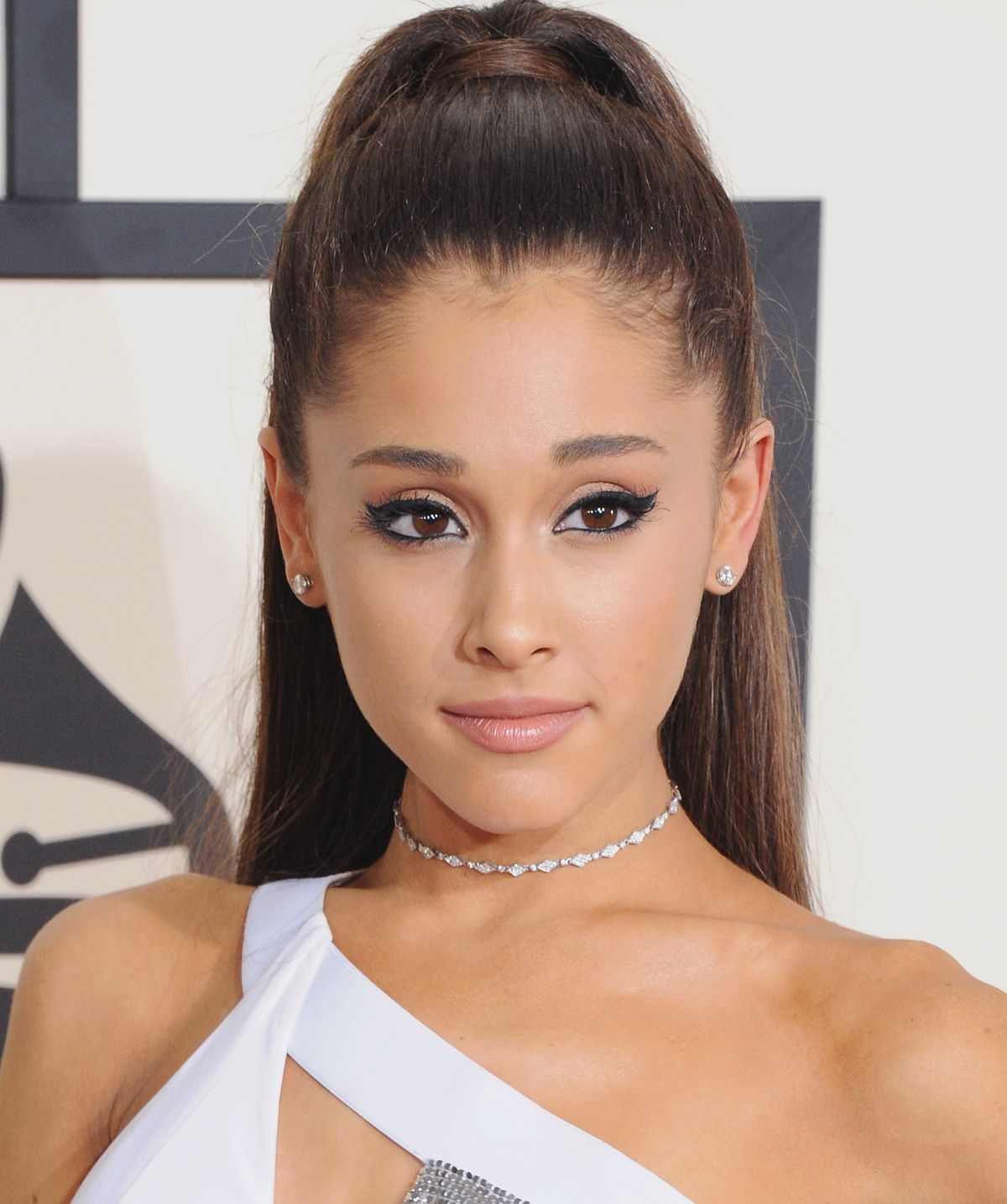 Who Is Ariana Grande?

Ariana Grande began performing onstage when she was a child. Her involvement in a Broadway play at age 15, followed by some small TV parts, helped her land the role of Cat on TV's Victorious. She followed that with the spinoff Sam & Cat and then dove headfirst into a chart-topping musical career, releasing five albums: Yours Truly (2013), My Everything (2014), Dangerous Woman (2016), Sweetener (2018) and Thank U, Next (2019).

Grande was born on June 26, 1993, in Boca Raton, Florida, to Edward Butera, a graphic designer, and Joan Grande, a businesswoman. She took to singing and acting at a young age and made her way onto the local theater scene before she was a teenager. Her first big break came in 2008 when the 15-year-old landed the role of Charlotte in the Broadway production of 13, a play focusing on life growing up in New York City. The early role led to accolades, and Grande won a National Youth Theatre Association Award.

Two years later, she appeared in the musical Cuba Libre and had a small role on a TV show called The Battery’s Down.

Grande landed her breakout role in the Nickelodeon series Victorious. Victorious was set at a performing arts high school, and Grande was cast as a goofy aspiring singer-actress named Cat Valentine. While busy with the show, Grande nevertheless pursued a musical career, making her first appearance on a record with the Victorious soundtrack. And in 2011, Grande released the single "Put Your Hearts Up," a pop song aimed at the hearts of her young Victorious audience. The show's devoted fan base voted Victorious Favorite TV Show at the 2012 Nickelodeon Kids' Choice Awards.

When Victorious went off the air in 2012, Grande's character Cat Valentine survived. She went to star in the Nick spin-off Sam & Cat, co-starring iCarly’s Jennette McCurdy. Sam & Cat wasn’t on long when rumors began to swirl that Grande wasn’t particularly enjoying the experience, and the show came to an abrupt end after 35 episodes (2013-14).

'Yours Truly' & 'My Everything'

“The Way” was the first single from Grande’s debut album, Yours Truly, a record that also featured the hits "Baby I" and "Right There." The album, produced by super-producer Babyface, showed a maturing Grande, and 1990s soul influences from pop diva Mariah Carey. The 2014 release My Everything sold 169,000 copies in its first week, debuting at No. 1. The single “Problem,” featuring Australian rapper Iggy Azalea, preceded the album release and debuted at No. 3 on Billboard’s Hot 100, selling more than 400,000 copies upon its release. “Break Free” with Zedd and “Love Me Harder” with The Weeknd followed, each climbing toward the top of the charts.

During the summer of 2014, Grande teamed up with Jessie J and Nicki Minaj on the single “Bang Bang,” a track that debuted at No. 6 and peaked at No. 3 in the United States. The album spawned another hit single “One Last Time,” which reached number 13 on the US Billboard Hot 100. Grande had three hit singles from My Everything on the Billboard chart at the same time.

In 2015 Grande released Christmas & Chill, a holiday album, and the single "Focus," which debuted at number seven on the Billboard's Hot 100. In February 2016, she released her third album Dangerous Woman, and the title track debuted at number 10 on the Hot 100 that March. She made music history with the track's success, becoming the first artist to have the lead singles from her first three albums debut in the Top 10. Dangerous Woman, which debuted at number two on the Billboard 200, also features collaborations with Nicki Minaj, Lil Wayne, Macy Gray and Future.

Grande returned to the charts in April 2018 with "No Tears Left to Cry," the catchy, upbeat response to the previous year's Manchester concert bombing. She followed in June with the dance track "The Light Is Coming," featuring Minaj; dropped the sultry "God Is a Woman" in mid-July; and delivered "Breathin" in September. The four releases were included in her highly anticipated album Sweetener, which debuted in mid-August, as was a track about her whirlwind romance with Saturday Night Live star Pete Davidson. The overall success of Sweetener led to her first Grammy win, for Best Pop Vocal Album, in February 2019.

Grande quickly returned to the studio to produce her fifth album, Thank U, Next. The title track hit airwaves in early November 2018, and another chart-topper, "7 Rings," arrived in January 2019. The album debuted in February to strong praise, alongside a new single, "Break Up with Your Girlfriend, I'm Bored."

In April 2019 the 25-year-old songstress demonstrated her drawing power by becoming the youngest performer ever to headline Coachella, as well as just the fourth woman to earn the honor. Her collaborations from around this time include "Rule the World," with 2 Chainz, "Monopoly," with Victoria Monét, and "Boyfriend," with Social House. Later that year Grande joined Miley Cyrus and Lana Del Rey for the single "Don't Call Me Angel," from the Charlie's Angels soundtrack.

Grande continued with the collaborations into 2020, her joint effort with Justin Bieber on "Stuck With U" hitting the Billboard top spot in May before she joined Lady Gaga for "Rain on Me" later in the month.

In 2017 Grande performed the title track for the soundtrack of the live action movie Beauty and the Beast. In February of that year, she began her Dangerous Woman tour across North America and then Europe. On May 22, 2017, tragedy struck after Grande finished a concert in Manchester, England and a suicide bomber detonated a bomb at the exit of the concert hall, killing 22 people and wounding 116, including many young adults and children. "All acts of terrorism are cowardly... but this attack stands out for its appalling sickening cowardice, deliberately targeting innocent, defenseless children and young people who should have been enjoying one of the most memorable nights of their lives," British Prime Minister Theresa May said after the attack.

The pop star responded to the horrific act on Twitter.

Less than a day after the attack, Grande suspended her Dangerous Woman tour. She returned to Manchester 13 days after the attack to perform a benefit concert on June 4 for the bombing victims, enlisting friends and fellow superstars to perform including Bieber, Cyrus, Katy Perry, Liam Gallagher, Chris Martin, and Pharrell Williams. Before the concert, Grande visited fans who had been injured in the attack, and she also offered 14,000 free tickets to people who had been at the May 22 concert.

Grande resumed her tour on June 7th in Paris, posting in Instagram: "First show back tonight. Thinking of our angels every step of the way. I love you with all my heart. Grateful for and incredibly proud of my band, dancers and entire crew. I love you. I love you."

The following year, the singer revealed that she was still feeling the effects of post-traumatic stress disorder from the event. "It's hard to talk about because so many people have suffered such severe, tremendous loss," she told British Vogue. "I don't think I'll ever know how to talk about it and not cry."

Among her many accolades, Grande has won six iHeartRadio Music Awards, five MTV Video Music Awards and three American Music Awards. She has also earned 12 Grammy nominations and one win.

The pop diva returned to television with a guest appearance on Scream Queens in 2015, and she hit the big screen in a cameo appearance in Zoolander 2 in 2016. She also starred as Penny Pingleton, Tracy Turnblad's best friend, in NBC's Hairspray Live! in December 2016.

In February 2020 Grande made a guest appearance on season 2 of Jim Carrey's Showtime series Kidding.

When she is not performing, the pop superstar supports various charitable causes including Kids Who Care, a group she co-founded that raises money for charities in the South Florida region. She also has cultivated a massive social media presence on Facebook, Twitter, Instagram and Snapchat, and landed on Time magazine's list of "The 100 Most Influential People" in 2016.

Grande went public with her romance with her "The Way" collaborator Mac Miller in August 2016. The pair split in May 2018 after almost two years of dating. "I respect and adore him endlessly and am grateful to have him in my life in any form, at all times regardless of how our relationship changes or what the universe holds for each of us!" Grande posted on Instagram.

On June 11, 2018, People magazine confirmed that the singer was engaged to SNL's Davidson, her boyfriend of several weeks. Subsequent attention focused on their affectionate social media posts directed at one another, though the couple found themselves in an awkward position when footage surfaced of Davidson making a joke about the Manchester concert bombing months earlier.

Grande was devastated by Miller's death from an accidental drug overdose in September 2018, a development that seemingly impacted her relationship with Davidson. By October 2018, the singer and comedian had split.

Grande went on to date Social House's Mikey Foster, before sparking a relationship with real estate agent Dalton Gomez. The pair got engaged in December 2020 and wed in May 2021.