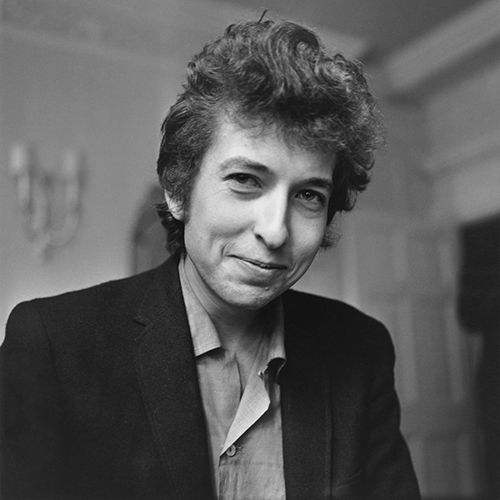 Who Is Bob Dylan?

Folk-rock singer-songwriter Bob Dylan signed his first recording contract in 1961, and he emerged as one of the most original and influential voices in American popular music. Dylan has continued to tour and release new studio albums, including Together Through Life (2009), Tempest (2012), Shadows in the Night (2015) and Fallen Angels (2016). The legendary singer-songwriter has received Grammy, Academy and Golden Globe awards, as well as the Presidential Medal of Freedom and the Nobel Prize for Literature.

Dylan was born Robert Allen Zimmerman on May 24, 1941, in Duluth, Minnesota, to parents Abram and Beatrice Zimmerman. He and his younger brother David were raised in the community of Hibbing, where he graduated from Hibbing High School in 1959.

Driven by the influences of early rock stars like Elvis Presley, Jerry Lee Lewis and Little Richard (whom he used to imitate on the piano at high school dances), the young Dylan formed his own bands, including the Golden Chords, as well as a group he fronted under the pseudonym Elston Gunn. While attending the University of Minnesota in Minneapolis, he began performing folk and country songs at local cafés, taking the name "Bob Dillon." (Despite a popular myth to the contrary, the pseudonym was not inspired by Welsh poet Dylan Thomas — who he later professed to dislike — but by the main character from the popular Western television series Gunsmoke.)

In 1960, Dylan dropped out of college and moved to New York, where his idol, the legendary folk singer Woody Guthrie, was hospitalized with a rare hereditary disease of the nervous system. He visited with Guthrie regularly in his hospital room; became a regular in the folk clubs and coffeehouses of Greenwich Village; met a host of other musicians; and began writing songs at an astonishing pace, including "Song to Woody," a tribute to his ailing hero.

In the fall of 1961, after one of his performances received a rave review in The New York Times, he signed a recording contract with Columbia Records, at which point he legally changed his surname to Dylan. Released early in 1962, Bob Dylan contained only two original songs, but showcased Dylan's gravel-voiced singing style in a number of traditional folk songs and covers of blues songs.

The 1963 release of The Freewheelin' Bob Dylan marked Dylan's emergence as one of the most original and poetic voices in the history of American popular music. The album included two of the most memorable 1960s folk songs, "Blowin' in the Wind" (which later became a huge hit for the folk trio Peter, Paul and Mary) and "A Hard Rain's A-Gonna Fall." His next album, The Times They Are A-Changin', firmly established Dylan as the definitive songwriter of the '60s protest movement, a reputation that only increased after he became involved with one of the movement's established icons, Joan Baez, in 1963.

While his romantic relationship with Baez lasted only two years, it benefited both performers immensely in terms of their music careers—Dylan wrote some of Baez's best-known material, and Baez introduced him to thousands of fans through her concerts. By 1964 Dylan was playing 200 concerts annually, but had become tired of his role as "the" folk singer-songwriter of the protest movement. Another Side of Bob Dylan, recorded in 1964, was a much more personal, introspective collection of songs, far less politically charged than Dylan's previous efforts.

In 1965, Dylan scandalized many of his folkie fans by recording the half-acoustic, half-electric album Bringing It All Back Home, backed by a nine-piece band. On July 25, 1965, he was famously booed at the Newport Folk Festival when he performed electrically for the first time. The albums that followed, Highway 61 Revisited (1965) — which included the seminal rock song "Like a Rolling Stone" — and the two-record set Blonde on Blonde (1966) represented Dylan at his most innovative. With his unmistakable voice and unforgettable lyrics, Dylan brought the worlds of music and literature together as no one else had.

Over the course of the next three decades, Dylan continued to reinvent himself. Following a near-fatal motorcycle accident in July 1966, Dylan spent almost a year recovering in seclusion. His next two albums, John Wesley Harding (1967)—including "All Along the Watchtower," later recorded by guitar great Jimi Hendrix—and the unabashedly country-ish Nashville Skyline (1969) were far more mellow than his earlier works. Critics blasted the two-record set Self-Portrait (1970) and Tarantula, a long-awaited collection of writings Dylan published in 1971. In 1973, Dylan appeared in Pat Garrett and Billy the Kid, a feature film directed by Sam Peckinpah. He also wrote the film's soundtrack, which became a hit and included the now-classic song, "Knockin' on Heaven's Door."

In 1974, Dylan began his first full-scale tour since his accident, embarking on a sold-out nationwide tour with his longtime backup band, the Band. An album he recorded with the Band, Planet Waves, became his first No. 1 album ever. He followed these successes with the celebrated 1975 album Blood on the Tracks and Desire (1976), each of which hit No. 1 as well. Desire included the song "Hurricane," written by Dylan about the boxer Rubin "Hurricane" Carter, then serving life in prison after what many felt was an wrongful conviction of triple homicide in 1967. Dylan was one of many prominent public figures who helped popularize Carter's cause, leading to a retrial in 1976, when he was again convicted.

After a painful split with his wife, Sara Lowndes — the song "Sara" on Desire was Dylan's plaintive but unsuccessful attempt to win Lowndes back — Dylan again reinvented himself, declaring in 1979 that he was a born-again Christian. The evangelical Slow Train Coming was a commercial hit, and won Dylan his first Grammy Award. The tour and albums that followed were less successful, however, and Dylan's religious leanings soon became less overt in his music. In 1982, he was inducted into the Songwriters Hall of Fame.

In 1989, when Dylan was inducted into the Rock & Roll Hall of Fame, Bruce Springsteen spoke at the ceremony, declaring that "Bob freed the mind the way Elvis freed the body. ... He invented a new way a pop singer could sound, broke through the limitations of what a recording artist could achieve and changed the face of rock and roll forever." In 1997, Dylan became the first rock star ever to receive Kennedy Center Honors, considered the nation's highest award for artistic excellence.

Dylan's 1997 album Time Out of Mind reestablished this one-time folk icon as one of rock's preeminent wise men, winning three Grammy Awards. He continued his vigorous touring schedule, including a memorable performance in 1997 for Pope John Paul II in which he played "Knockin' on Heaven's Door," and a 1999 tour with Paul Simon. In 2000, he recorded the single "Things Have Changed" for the soundtrack of the film Wonder Boys, starring Michael Douglas. The song won Dylan a Golden Globe and an Academy Award for Best Original Song.

Dylan then took time out from his music to tell the story of his life. The singer released Chronicles: Volume One, the first in a three-book memoir series, in the fall of 2004. Dylan gave his first full interview in 20 years for a documentary released in 2005. Entitled No Direction Home: Bob Dylan, the film was directed by Martin Scorsese.

In 2006, Dylan released the studio album Modern Times. After hitting stores in late August, it reached the top of the album charts the next month. A mixture of blues, country and folk, the album was praised for its rich sound and imagery. Several critics also remarked the album had a playful, knowing quality. Showing no signs of slowing down, Dylan continued to tour throughout the first decade of the 21st century, and released the studio album Together Through Life in April 2009.

In 2010, he released a bootleg album called The Witmark Demos, followed by a new boxed set entitled Bob Dylan: The Original Mono Recordings. In addition, he exhibited 40 of his original paintings for a solo show at the National Gallery of Denmark. In 2011, the artist released yet another live album, Bob Dylan in Concert - Brandeis University 1963, and in September 2012, he delivered his newest studio album, Tempest. Shadows in the Night, a cover album of American standards, followed in 2015.

A year later, Dylan released Fallen Angels, his 37th studio album, which features more classic songs from the Great American Songbook. In 2017, he continued to celebrate the classics with his three-disc studio album Triplicate, which features 30 American standards, including “Stormy Weather," “As Time Goes By” and “The Best Is Yet To Come.”

In addition to winning Grammy, Academy and Golden Globe awards, Dylan received the Presidential Medal of Freedom from President Barack Obama in 2012. On October 13, 2016, the legendary singer-songwriter also received the Nobel Prize in Literature, the first time the honor was bestowed on a musician. He became the first American to receive the honor since novelist Toni Morrison in 1993, and was lauded by the Swedish Academy "for having created new poetic expressions within the great American song tradition."

Dylan was back in the news in November 2017 with the release of the boxed set Trouble No More — The Bootleg Series Vol. 13 / 1979-1981. Around that time it was announced that his old recording studio in Manhattan's Greenwich Village was being reopened as a luxury apartment building, with lofts available for a minimum of at $12,500 per month. Not long afterward, the door to his room at the famed Chelsea Hotel was sold at an auction for $100,000.

In 2018, Dylan was one of the artists featured on the six-track EP Universal Love: Wedding Songs Reimagined, a collection of classics from various eras revised with same-sex pronouns. Dylan recorded the 1929 standard "She's Funny That Way" as "He's Funny That Way," while later hits like "My Girl" and "And Then He Kissed Me" also received fresh takes with a pronoun twist.

November 2019 brought the release of another cache of little-heard material with Bob Dylan (Featuring Johnny Cash) — Travelin’ Thru, 1967–1969: The Bootleg Series Vol. 15. Along with songs from Dylan's 1969 collaborations with Cash, the three-CD set included tracks from his 1970 session with bluegrass great Earl Scruggs and outtakes from the 1967 John Wesley Harding and 1969 Nashville Skyline recording sessions.

Dylan gave fans a pleasant surprise with the March 2020 release of a 17-minute song, "Murder Most Foul," about the assassination of John F. Kennedy. He provided few details about the track in a brief statement, noting only that it was "recorded a while back."

In addition to Baez, Dylan was at one point romantically linked to another singer, gospel icon Mavis Staples, and wished to marry her, though the two never took the trip down the aisle. Dylan and Lowndes, who married in 1965 and divorced in 1977, had four children together: Jesse, Anna, Samuel and Jakob, with Jakob going on to become lead singer of the popular rock group the Wallflowers. Dylan also adopted Lowndes's daughter, Maria, from a previous marriage.

When he is not making music, Dylan has explored his talents as a visual artist. His paintings appear on the covers of his albums, Self Portrait (1970) and Planet Waves (1974), and he has published several books of his paintings and drawings, as well as exhibited his artwork around the world.