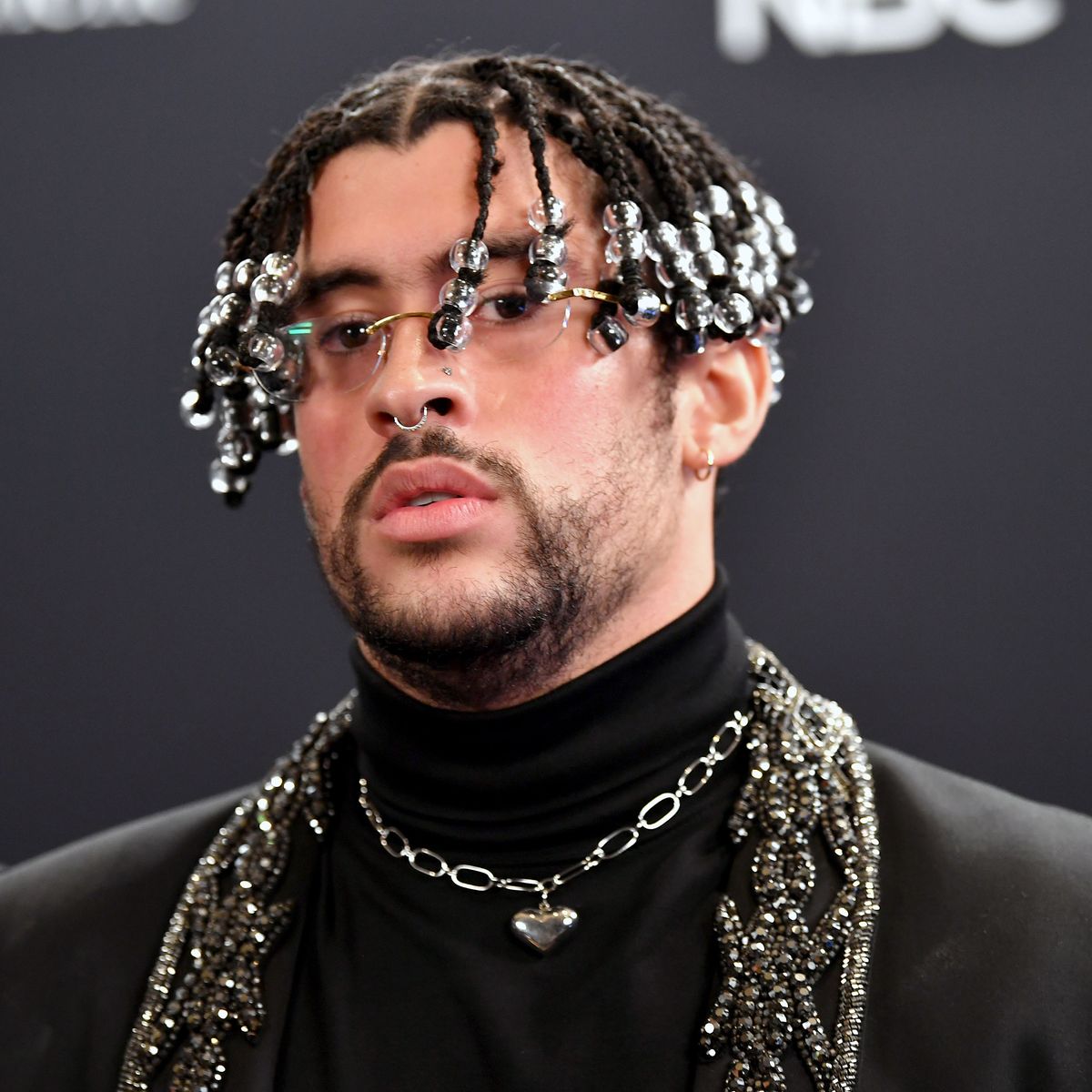 Who Is Bad Bunny?

Bad Bunny is a Puerto Rican musician with fans around the world. He became a success while writing and singing in his native Spanish, unlike previous acts who switched to English to broaden their fan bases. Instead of catering to the machismo-fueled mentality that pervades música urbana's hip-hop, trap and reggaeton, Bad Bunny is comfortable painting his nails, wearing skirts and dressing in drag. He was part of 2021's WrestleMania 37 and has also started to take on acting roles.

Bad Bunny was born Benito Antonio Martínez Ocasio on March 10, 1994, in Vega Baja, Puerto Rico, which is approximately 30 miles west of San Juan. Bad Bunny was raised in a lower middle-class household in Vega Baja's Almirante Sur neighborhood. His father was a truck driver and his mother taught English. He has two younger brothers, Bernie and Bysael.

Young Bad Bunny was a fan of reggaeton (a blend of hip-hop and reggae) and liked performers such as Daddy Yankee and Vico C. He sometimes got to hear reggaetonero Tego Calderón in the car on the way to school. Bad Bunny also listened to salsa, merengue and rock. At one point, his preferred music was the Bee Gees.

Bad Bunny sang in the choir of his local Catholic church until he was 13. He then concentrated on making his own beats in his room and free-styling at school.

Bad Bunny enrolled in the audiovisual-communications program at the University of Puerto Rico's Arecibo campus. To support his studies, he bagged groceries at an Econo supermarket.

Bad Bunny first began sharing his music on SoundCloud when he was still a college student. In 2016, the popularity of his song "Diles" resulted in calls from producers, which Bad Bunny had to answer while at work in the grocery store.

After Bad Bunny found a manager, Noah Assad, the pair developed a plan to get attention by releasing singles and videos on YouTube instead of trying to sign with major record labels.

In 2017, Bad Bunny was part of a number of successful singles, such as "Pa Ti," "Loco Pero Millonario" and "Sensualidad." His singles success continued in 2018 with the Grammy-nominated "I Like It."

Bad Bunny's debut album X 100PRE came out on Christmas Eve 2018. It climbed to No. 1 on Billboard's Top Latin Albums chart. The record showcases Bad Bunny's skills in multiple music genres, which provided a way for him to both cope with his success and demonstrate his abilities. X 100PRE received a Latin Grammy for Best Urban Music Album.

Bad Bunny performed at the 2020 Super Bowl with Shakira, Jennifer Lopez and J Balvin. On Leap Day of that year, he released a reggaeton album, YHLQMDLG (Yo Hago Lo Que Me Da La Gana, which translates to "I Do Whatever I Want"). It debuted at No. 2 on the Billboard 200. It also won a Grammy for Best Latin Urban/Pop Album, which Bad Bunny dubbed his "gringo Grammy."

In May 2020, another Bad Bunny album, Las Que No Iban a Salir, arrived. Its 10 tracks include outtakes from previous recording sessions. Later that year his single "Dakiti" had a No. 1 debut. And on Thanksgiving 2020, Bad Bunny's third album of the year, El Último Tour del Mundo, arrived. It became the first all-Spanish album to launch at No. 1 on the Billboard 200.

Spotify declared Bad Bunny to be its artist of the year in December 2020. His music had more than 8 billion streams.

In a 2021 interview, Bad Bunny said, "I'm pleased that we are in a time where I don't need to change anything about myself — not my musical style, not my language, not my culture — to go far. That doesn't mean I'll never sing in English. I already sang in Japanese, so maybe one day I'll sing in English. It feels great to do things my way."

Bad Bunny's music often contains socially conscious messages. Following the devastation of Hurricane Maria, he tried to capture Puerto Rico's spirit in "Estamos Bien." When he performed the song on The Tonight Show with Jimmy Fallon, Bad Bunny reminded the audience that numerous Puerto Rican households were still without power a year after the September 2017 storm.

With 2018's "Sólo de Mí," Bad Bunny addressed domestic violence in Latin America. During another Tonight Show appearance in 2020, Bad Bunny brought attention to the murder of a trans woman in Puerto Rico by wearing a shirt with the words, "Mataron a Alexa, no a un hombre con falda," which means "They killed Alexa, not a man in a skirt."

During the 2020 quarantine for the Covid-19 pandemic, Bad Bunny serenaded New Yorkers while riding on top of a truck through the city. At his final stop, he sang to health workers at Harlem Hospital.

Bad Bunny has also engaged in direct activism. He took part in July 2019 protests demanding the resignation of Puerto Rico governor Ricardo Rosselló after text messages revealed the governor and other officials being sexist and homophobic, as well as mocking hurricane victims. Bad Bunny also penned the protest song "Afilando Los Cuchillos." Prior to the 2020 election, he urged people to vote.

Bad Bunny's Good Bunny Foundation aids children in poverty. He partnered with Cheetos' Deja Tu Huella campaign to distribute $500,000 among 10 students who are serving their communities.

Bad Bunny is known for his unique fashion sensibilities and has designed clothes and sneakers for Adidas. He put his own spin on a series of glow-in-the-dark Crocs, which quickly sold out after their release.

Bad Bunny has a supporting role in the TV show Narcos: Mexico. He also appeared with Brad Pitt in the action movie Bullet Train and has a role in the upcoming comedy American Sole.

How Did Bad Bunny Get His Name?

Bad Bunny shared the origins of his name with ET in 2018. "When I was a little boy in school, I had to dress up as a bunny, and there's a picture of me with an annoyed face. And when I saw it, I thought I should name myself 'Bad Bunny,'" he explained. "It's a name I knew would market well. A bunny is something so common that I thought to myself, every time someone sees one, they'll remember my music.”

Bad Bunny began dating jewelry designer Gabriela Berlingeri in 2017, after meeting her at a restaurant in Puerto Rico. The pair spent the Covid-19 quarantine period together. Berlingeri sang on the song "En Casita" with Bad Bunny.

In addition to drawing attention for his painted nails, Bad Bunny has demonstrated an open-minded attitude toward sex and gender. "It does not define me," he said of his sexuality in 2020. "At the end of the day, I don't know if in 20 years I will like a man. One never knows in life. But at the moment I am heterosexual and I like women."