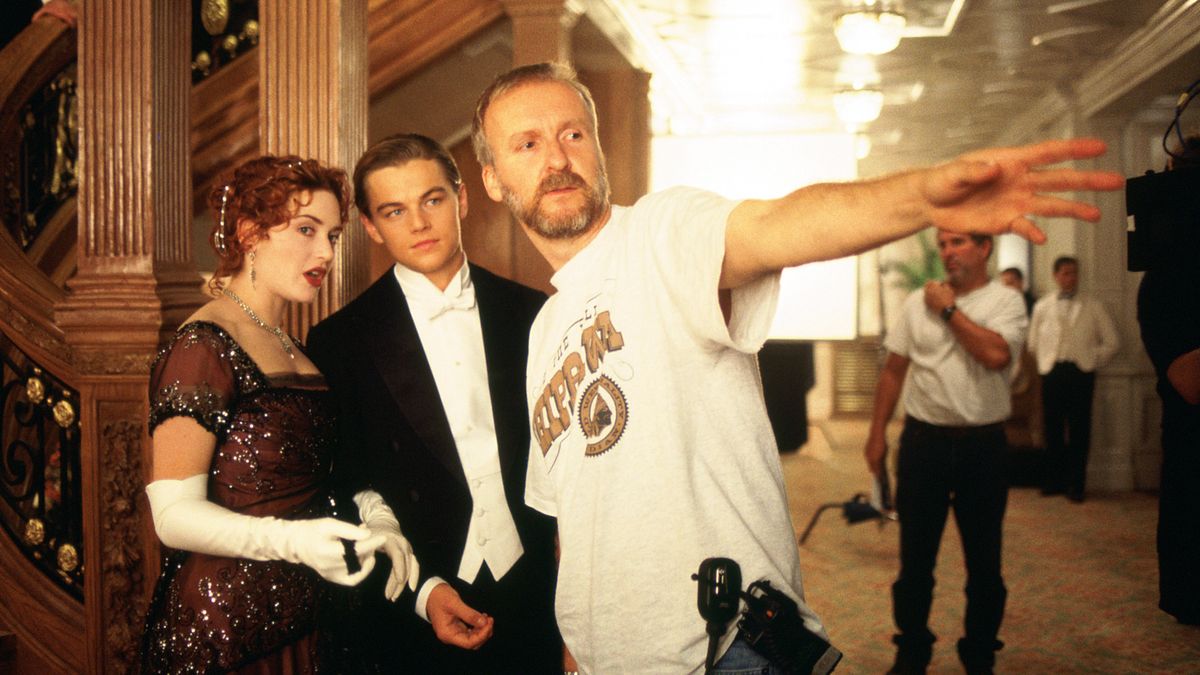 The only pairing more iconic in the 1990s than Titanic’s Rose DeWitt Bukater and Jack Dawson were the actors behind the characters, Kate Winslet and Leonardo DiCaprio.

And if it weren’t for Winslet herself, that perfect casting may not have happened. “I closed the script, wept floods of tears and said, ‘Right, I’ve absolutely got to be a part of this. No two ways about it,’” the actress told Rolling Stone in 1998.

She set off on a mission: She called her agent and asked for director James Cameron’s phone number. “He was on the freeway, and he said, ‘I’m going somewhere,’” she recalled. “And I think he pulled over, and I said, ‘I just have to do this, and you are really mad if you don’t cast me.’”

Fortunately, it was that precise spirit that sold Cameron on Winslet as Rose — and she booked the role.

Winslet fought for DiCaprio to be cast as Jack

But Winslet wasn’t done. She was convinced DiCaprio was the perfect Jack to her Rose, so she pretty much stalked him at the Cannes Film Festival, sneaking out of a press conference and cornering him at his hotel. “I was thinking, ‘I’m going to persuade him to do this, because I’m not doing it without him, and that’s all there is to it,’” she remembered. “‘I will have him.’ Because he is f*****g brilliant. He’s a f*****g genius, and that was absolutely why.”

And so the duo of Winslet and DiCaprio became known to the world as Rose and Jack in the blockbuster hit, which opened on December 19, 1997, and went on to gross $2.19 billion worldwide.

“Titanic was very much an experiment for Kate Winslet and I,” DiCaprio told Deadline in 2016. “We’d done all of these independent movies. I loved her as an actress and she said, ‘Let’s do this together, we can do this.’ We did it, and it became something that we could’ve never foreseen.”

But the iconic silver screen couple — who teamed up again for 2008’s Revolutionary Road — almost didn’t come to be. Here’s who else was up for consideration for key roles in Titanic:

Gwyneth Paltrow was one of the final choices for Rose 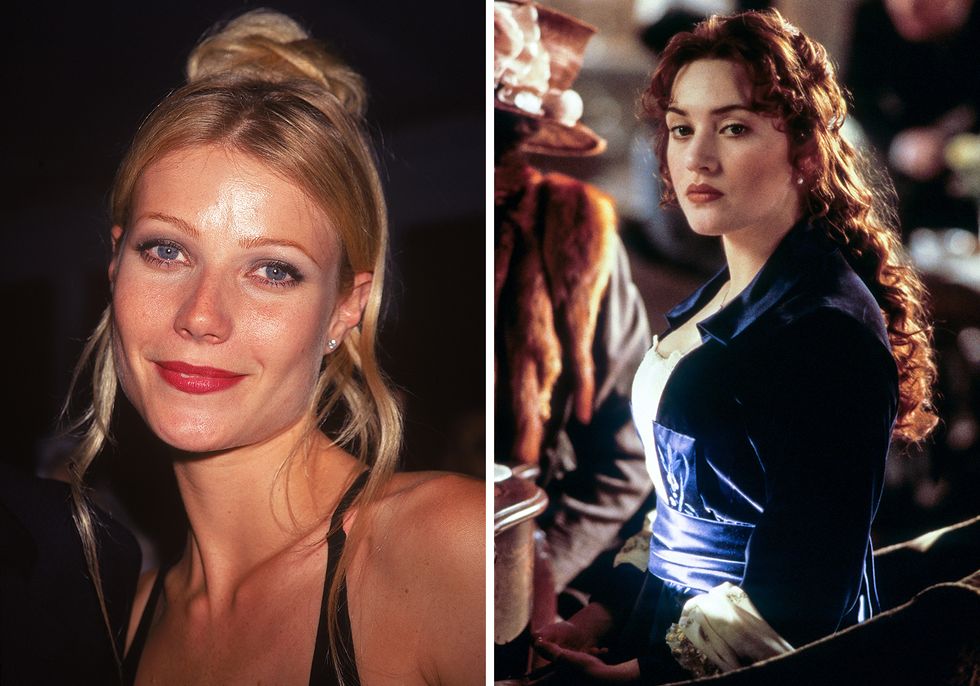 The daughter of actress Blythe Danner and producer/director Bruce Paltrow, Gwyneth Paltrow had already been in more than a dozen films before Titanic came out. Despite her mother’s wishes, she spilled that she was up for the Rose role.

“My mother will kill me that I'm talking about turning down movie roles,” she said on Howard Stern. "She says it's not ladylike."

But she did go on to say, “I know that the story is that I turned it down. I think I was really in contention for it — I was one of the last two.”

She added that she “couldn’t change the past” before musing about the big picture. “I look back at the choices I've made and think, ‘Why the hell did I say yes to that? And no to that?’ And you know, you look at the big picture and think: There's a universal lesson here. What good is it to hold onto roles?”

Claire Danes was also one of the top choices for Rose but ultimately turned it down because she had just starred in 1997's Romeo + Juliet with DiCaprio and didn't want a repeat.

"I was really clear about it, I wasn't conflicted," Danes said on the Armchair Expert podcast about her decision to turn down the role. "I was feeling eager to have different creative experiences and that felt like a repeat and it was going to propel me towards something that I knew I didn't have the resources to cope with."

But Paltrow and Danes weren't the only big names considered. Other actresses who reportedly turned down the role, according to IMDb, include Drew Barrymore, Rose Byrne, Geena Davis and Nicole Kidman. Among those who allegedly went in for an audition were Angelina Jolie, Madonna and Charlize Theron. 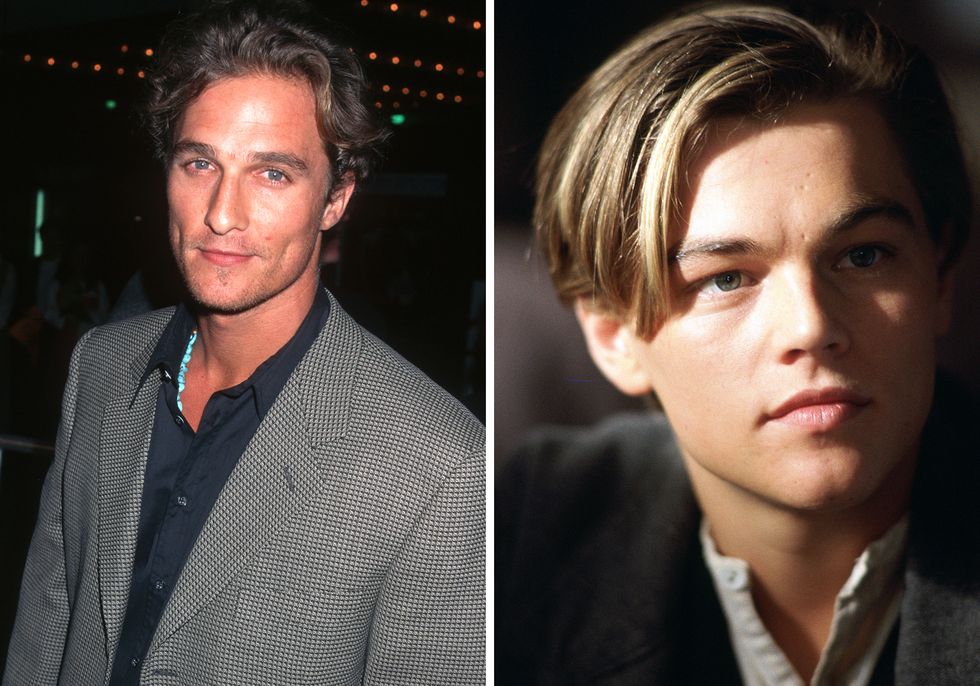 Following his breakthrough roles in 1993’s Dazed and Confused and 1996’s A Time to Kill, Matthew McConaughey was in high demand. And when the opportunity to star in Titanic came along, he was all in. “I went and auditioned for that. I wanted that,” he told The Hollywood Reporter. “I auditioned with Kate Winslet. Had a good audition. Walked away from there pretty confident that I had it.”

For her part, Winslet fondly remembers the audition as well, recounting it on The Late Show with Stephen Colbert. “I auditioned with Matthew, which was completely fantastic,” she said. “It would have been a totally different film. It just wouldn’t have been the whole Jack and Rose, Kate and Leo.”

Cameron says it was down to the female factor. “Matthew read for the part and then we met Leo. Leo came in for an interview and I had this weird thing,” he said on The Tonight Show with Jimmy Fallon. “I looked around the room and every woman in the building was in the meeting… the accountant was there, the female security guard, so I thought maybe I better cast this guy.”

But McConaughey wasn’t the only one who read with Winslet. An audition tape shows Jeremy Sisto, who had played Elton Tiscia in 1995’s Clueless and Frank Beaumont in 1996’s White Squall, in a scene with her.

“That was one of the many, many jobs I didn’t get,” Sisto said on HuffPost Live. “It’s always fun to see a movie that you know really well and love with this alternate universe person in there. So while I was a little embarrassed to reveal one of my many failures in life, at the same time I couldn’t deprive Titanic lovers of seeing that alternate universe.”

He added: “I read with Kate as well as three other actresses. I was just insanely inspired by it and a little heartbroken when the role didn’t come my way.”

According to IMDb, prior to that, River Phoenix had long been in mind for the film before his untimely death in 1993 at the age of 23. Billy Crudup, Johnny Depp and Stephen Dorff reportedly turned down the role, while Christian Bale and Ethan Hawke did an audition. Also reportedly considered: Macaulay Culkin, Tom Cruise, Jared Leto, Chris O’Donnell and Brad Pitt.

Hugh Grant turned down the opportunity to play Cal 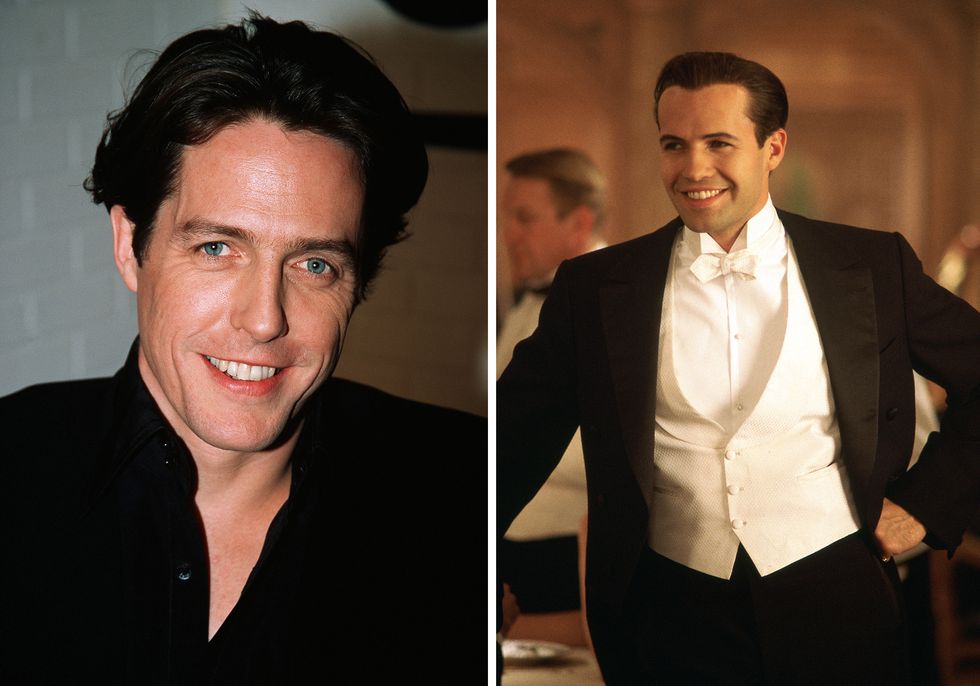 Although Pierce Brosnan, Rupert Everett and Rob Lowe were all reportedly up for the millionaire son Cal Hockley, who was engaged to Rose, Cameron offered the role to Hugh Grant.

It was only after the star of 1994’s Four Weddings and a Funeral and 1995’s Sense and Sensibility passed on the role that it went to Billy Zane, who Cameron had taken notice of in 1996’s action film The Phantom. 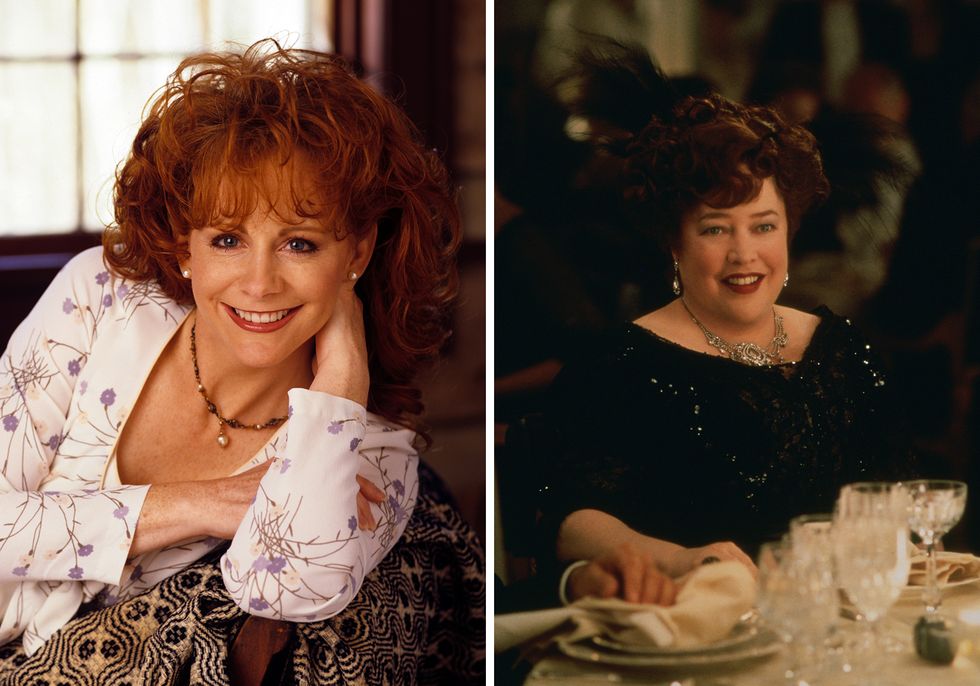 Years before her sitcom Reba debuted, singer Reba McEntire had actually accepted the role of the famous Unsinkable Molly Brown. But then her tour dates got in the way.

“We were on tour and I had a lot of people on the payroll,” McEntire said on Watch What Happens Live. “We had these three months already scheduled to do the movie, and then they got behind on scheduling and said ‘We’ll have to move it to this time.’ So we couldn’t reschedule all the arenas and everything.”

Lindsay Lohan was the first choice for Cora 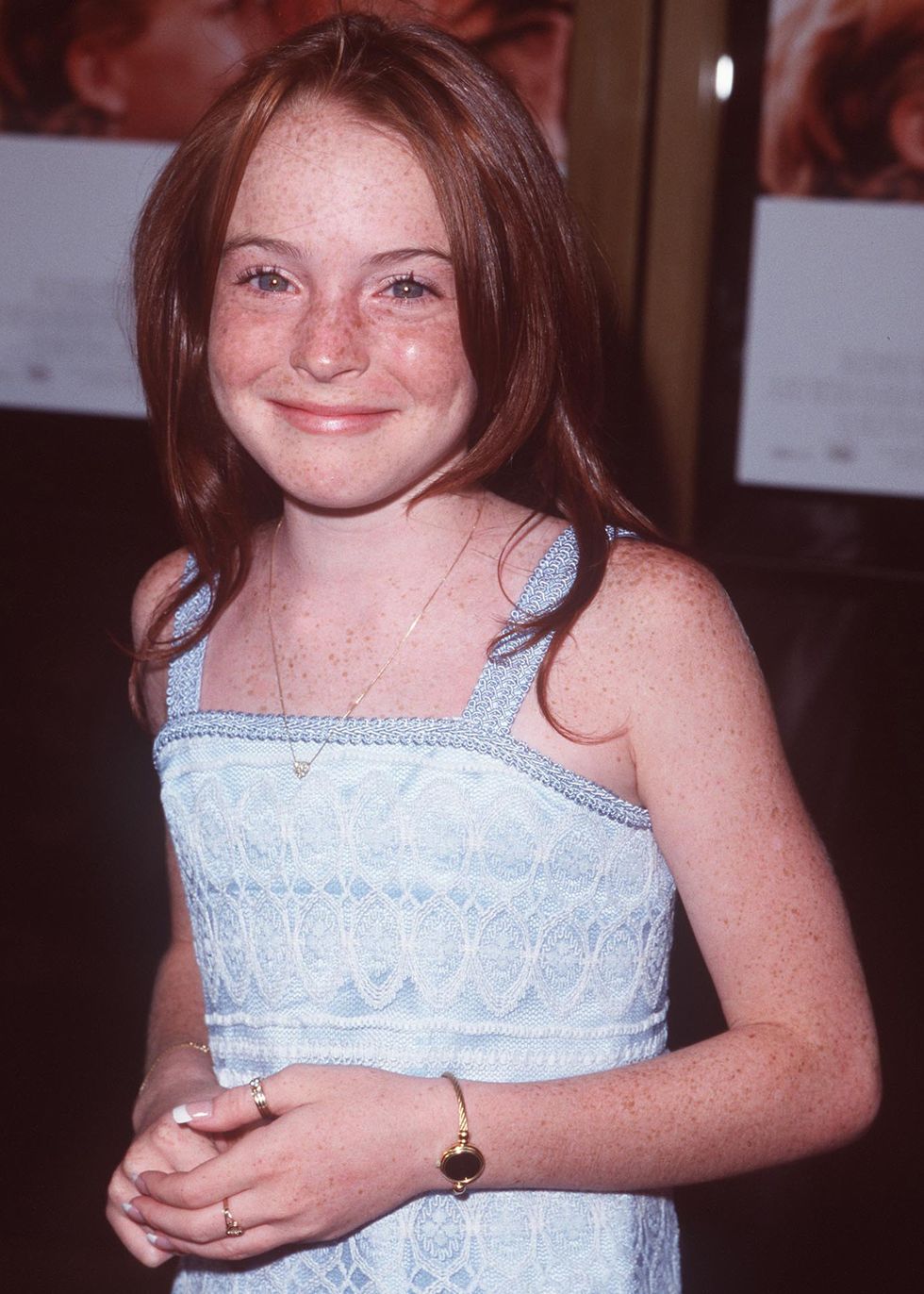 Before she did double duty as in the 1998 remake of The Parent Trap, Lindsay Lohan was reportedly up for the role of 7-year-old Cora Cartmell, best known for her scene dancing with Jack during the party, when he says, “You’re still my best girl, Cora.”

But ultimately, it came down to hair color. With Winslet in the picture, he thought he had too many redheads and hired Alexandrea Owens instead.