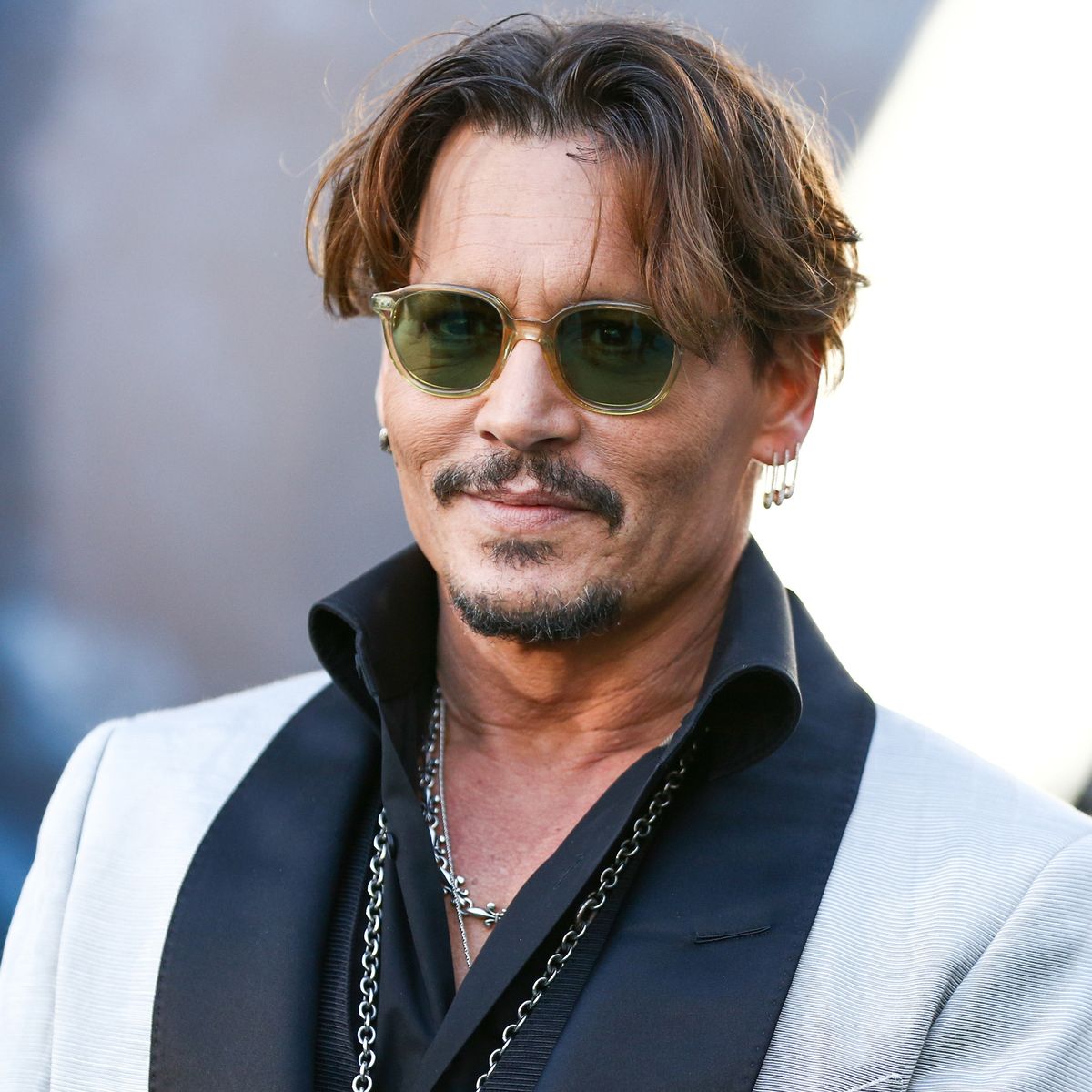 Who Is Johnny Depp?

Johnny Depp landed his first legitimate movie role in Nightmare on Elm Street (1984). He began studying acting in earnest, the lessons paying off in 1987 when he landed a role on the TV show 21 Jump Street. He has since become known for his willingness to take on darker roles in films such as Edward Scissorhands (1990), Sleepy Hollow (1999) and Alice in Wonderland (2010), as well as his starring efforts in the big-budget Pirates of the Caribbean movies.

Johnny Depp was born John Christopher Depp II, in Owensboro, Kentucky, on June 9, 1963, to parents John and Betty Sue Depp. Depp's father worked as a civil engineer and his mother worked as a waitress and homemaker. The youngest of four children, Depp was withdrawn and a self-admitted oddball.

Depp and his family moved frequently to accommodate his father's job, finally landing in Miramar, Florida, when Depp was 7 years old. The family lived in a motel for nearly a year, until his father found a job. Depp hated his new home and, by the age of 12 began smoking, experimenting with drugs and engaging in self-harm due to the stress of family problems.

In 1978, when Depp was 15, his parents got divorced. As the youngest of four, it became Depp's job to go to his father's office and pick up the weekly child-support money. The split caused a rift between Depp and his father.

At 16, Depp dropped out of high school and joined a garage band called the Kids. The group became successful enough to open for the Talking Heads and the B-52s, but they barely made ends meet. Depp lived for months in a friend's '67 Chevy Impala.

Introduction to Acting and '21 Jump Street'

In 1983, at the age of 20, Depp met and married 25-year-old makeup artist Lori Allison. That same year, the couple moved to L.A. with Depp's band in the hopes of striking it big. Still living on a shoestring budget, Depp and his bandmates supported themselves by selling pens for a telemarketing firm.

A year later, Depp fell into acting when his wife introduced him to her ex-boyfriend, actor Nicolas Cage. Cage saw potential in Depp, and introduced the hopeful musician to a Hollywood agent. After several small roles as an extra, Depp landed his first legitimate movie role in the horror film Nightmare on Elm Street (1984).

By 1985, the Kids had broken up — and so had Depp's marriage. After his split with Allison, Depp struck up a relationship with actress Sherilyn Fenn, whom he met on the set of the short film Dummies (1985). They were briefly engaged, but split shortly after. After their break-up, Depp then met and proposed to actress Jennifer Grey; their romance was also short-lived.

Depp started to study acting in earnest, first in classes at the Loft Studio in Los Angeles and then with a private coach. The lessons paid off in 1987 when he replaced actor Jeff Yagher in the role of undercover cop Tommy Hanson in the popular Canadian-filmed television series 21 Jump Street. The role thrust Depp into almost immediate stardom; he became a teen idol overnight, though he resented that label. When his contract on Jump Street expired in 1989, he leapt at the opportunity to pursue weightier roles.

In 1990, Depp starred in the John Waters '50s-kitsch musical Cry-Baby (1990), which became a cult hit and succeeded in changing his image. That same year, he received an opportunity to exhibit his versatility as an actor in the titular role of Tim Burton's fantasy film, Edward Scissorhands. The movie not only established Depp as an A-list actor, but it also grossed more than $54 million at the box office. Following the film's success, Depp carved a niche for himself as a serious, somewhat dark, idiosyncratic performer, consistently selecting roles that surprise critics and audiences alike.

It was during shooting for Edward Scissorhands that Depp met co-star Winona Ryder, whom he'd been eyeing since a brief meeting at the premiere for her film Great Balls of Fire (1989). The two began dating on the set and soon became a Hollywood power couple. Five months after their first date, Depp and Ryder became engaged. To solidify their love, Depp even had "Winona Forever" tattooed on his right arm. The couple split, however, in 1993 after Ryder's parents forbade their daughter to marry.

Outside of his personal life, Depp continued to flourish, gaining critical acclaim and increasing popularity for his work. Several of his most notable roles included his role as the social misanthrope Sam in Benny & Joon (1993), which earned him a Golden Globe nod, and Gilbert in What's Eating Gilbert Grape? (1993), which cast him as a young man dissatisfied with the confines of his small-town life.

In August 1993, he and two business partners bought The Viper Club in L.A., which instantly became the hippest spot on the Sunset Strip. Depp began using the club as an opportunity to introduce patrons to music from his newly formed band P, which offered popular shows at the venue. But tragedy hit the club on October 31 of that same year, when teen heartthrob and critically acclaimed actor River Phoenix suffered a drug overdose outside the club. Phoenix died later that evening.

Depp also dabbled with drugs and spiraled into a deep depression. Around this time he started a very public relationship with supermodel Kate Moss. Depp and Moss constantly made headlines for their passionate and unpredictable behavior; in 1994, Depp famously trashed a New York hotel room after one of the couple's many fights.

Depp's wild behavior didn't seem to have an effect on his professional life. In 1994 he re-teamed with Burton in the biopic Ed Wood, about the infamous B-movie director. The film won Depp critical acclaim and another Golden Globe nomination. Other notable films in the late '90s include Don Juan DeMarco (1995), in which Depp plays a character who believes he is the famous fictional Don Juan, and Donnie Brasco (1997), which featured Depp as an undercover FBI agent seeking to infiltrate the Bonano crime family.

In 1998, Depp split from long-time girlfriend Moss and took the role of journalist Hunter S. Thompson's alter ego in Terry Gilliam's adaptation of Fear and Loathing in Las Vegas. During filming, Depp cultivated a strong friendship with Thompson, which lasted until Thompson's death in 2005. Depp would later finance the writer's funeral.

For Depp's next film project, he tried his hand at sci-fi horror with The Astronaut's Wife in 1999. The same year, he teamed up with Burton once again on Sleepy Hollow, starring as a prim, driven Ichabod Crane. He appeared the following year in the small but popular romantic drama Chocolat, followed by a big-budget role as real-life cocaine kingpin George Jung in Blow in 2001. Depp then appeared in the terror drama From Hell in 2001 and Robert Rodriguez's Once Upon a Time in Mexico in 2002.

In 2004, Depp earned an Academy Award nomination for his starring role as Captain Jack Sparrow in the family adventure Pirates of the Caribbean. The film was a box office smash, fueling the creation of the Pirates franchise. At the end of that year, Depp also turned in a critically acclaimed performance in Finding Neverland, in which he starred as Peter Pan creator J.M. Barrie. The film earned him more than 10 award nominations, including both Academy and Golden Globe nods.

Depp then took on one of theater's most notorious characters in Sweeney Todd: The Demon Barber of Fleet Street, also in 2007. Directed by Burton and co-starring Helena Bonham Carter, the dark and gory musical tells the tale of a barber who kills his customers before seeing them turned into pies by his downstairs neighbor. Depp netted a Golden Globe Award for his work on the film.

In 2009, two Depp films — The Imaginarium of Doctor Parnassus and Public Enemies — premiered with mixed results. He returned to box office success with the 2010 film adaptation of the Lewis Carroll classic Alice in Wonderland. For the project, Depp again teamed up with Burton to take on the character of the Mad Hatter. The film, starring Mia Wasikowska as Alice, brought in more than $116 million in its opening weekend.

Once again roving on the high seas, Depp reprised his role of Jack Sparrow in another installment of the Pirates of the Caribbean film series in 2011. He returned to independent film that same year with The Rum Diary, based on the book by Thompson.

In the Burton comedy Dark Shadows (2012) Depp played Barnabas Collins, a vampire who escapes imprisonment and returns to his family home. There, Collins tries to help his descendants played by Michelle Pfeiffer, Chloë Grace Moretz and Jonny Lee Miller. Depp was a longtime fan of the film's source material — the late 1960s gothic soap opera Dark Shadows — and encouraged friend Burton to bring it to the big screen.

Unfortunately, Depp's next big-budget endeavor didn't fare nearly as well as his earlier films. In 2013, the A-list actor teamed up with Pirates producer Jerry Bruckheimer once again in the Disney film The Lone Ranger. The film, which cost more than $215 million to produce, performed poorly at the box office and received lackluster reviews.

Depp then took on the role of notorious crime boss Whitey Bulger in the 2015 biopic Black Mass. In 2016, Depp reprised his role as the Mad Hatter in Through The Looking Glass, Burton’s latest take on Carroll’s sequel to Alice's Adventures In Wonderland. The following year, he returned as Jack Sparrow for Pirates of the Caribbean: Dead Men Tell No Tales and joined the ensemble cast for an adaptation of Murder on the Orient Express.

In 2018, Depp jumped into another major feature film franchise with the part of evil wizard Gellert Grindelwald in Fantastic Beasts: The Crimes of Grindelwald.

In 2012, stories began to circulate that Depp and Paradis had split up. Depp initially denied these rumors, but his representative confirmed the couple's break-up in June. In a statement given to Entertainment Tonight, Depp's representative said that the pair "have amicably separated" and asked that people "respect their privacy" and "the privacy of their children." Depp and Paradis had been together for nearly 14 years when they split.

Depp met another future love interest on the set of a film while still publicly involved with Paradis. While filming The Rum Diary, he met co-star Amber Heard. The couple was seen publicly together for the first time in 2012, not long after Depp's split with Paradis. The couple got engaged on Christmas Eve in 2013 and tied the knot in February 2015.

Heard filed for divorce in May 2016, and shortly afterward she also filed a restraining order, alleging that Depp had been verbally and physically abusive. The two reached a settlement that August, and the divorce was finalized in January 2017. However, after Heard penned an op-ed in December 2018 that described her experiences with domestic violence, Depp filed a $50 million defamation lawsuit against his ex-wife a few months later.

In October 2017, Depp filed a $25 million lawsuit against his former business managers, claiming they mismanaged $650 million of his earnings from the previous two decades. The following April, Depp was on the other end of a lawsuit, with two former personal security guards suing him for unpaid wages and their exposure to dangerous work conditions.

In July 2018, it was reported that Depp was being sued for allegedly hitting a location manager on the set of his upcoming film City of Lies, about the murder of rapper Notorious B.I.G. According to the suit, the movie star grew irate when told that production was finished for the day, at which point he twice "forcefully punched" the location manager in the lower left side of his rib cage and unleashed a verbal tirade until being dragged away by his bodyguards. As a result, the movie was pulled from distribution a month before its scheduled September 7 release date.

Depp filed a response in which he claimed to be acting in self-defense over Brooks's "unlawful and wrongful conduct," which caused him to "fear for his safety."