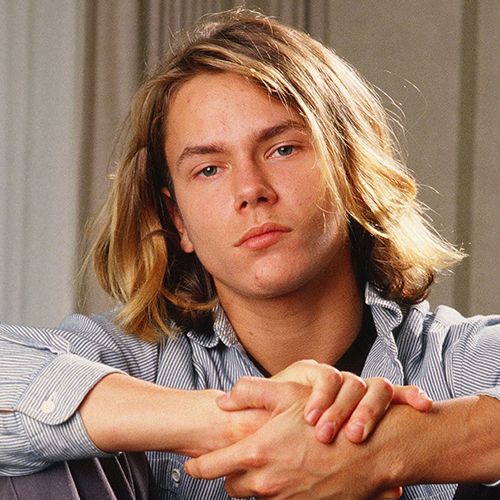 Who Was River Phoenix?

River Phoenix was an American actor who had his breakthrough film role in Stand by Me, based on the novella by Stephen King. He earned an Academy Award nomination for Sydney Lumet's Running on Empty, and also starred as the young Indy in Indiana Jones and the Last Crusade. Phoenix died of a drug overdose outside West Hollywood's Viper Room in 1993.

Born River Jude Bottom on August 23, 1970, in Madras, Oregon. Considered one of the most talented actors of his generation, River Phoenix had his promising career cut short by his premature death in 1993. He was born on a farm where his parents, John Lee Bottom and Arlyn Dunetz, were working. The couple followed a bohemian lifestyle, moving around a lot with their infant son. They named their son after the river of life in Hermann Hesse’s book Siddhartha.

In 1972, the Bottoms took their lives in a new direction, joining the Children of God religious movement. Phoenix became a big brother when the couple had second child, a daughter named Rain, that same year. As missionaries for the Children of God, the Bottoms lived in Texas, Mexico, Puerto Rico and Venezuela. Phoenix gained two more siblings during this time — brother Joaquin and sister Liberty. His sister Summer was born later.

As a young child, Phoenix learned to play guitar and sing. Phoenix and Rain performed on the streets in Caracas, Venezuela, to earn money and pass out literature on their religious beliefs. His parents eventually became disillusioned with their religious group and decided to return to the United States in 1978. They spent time in Florida, where Phoenix and some of the other children performed in talent shows and started to attract attention for their musical and acting abilities.

Before long, Phoenix and his family moved out to California to try to make in the entertainment industry. His mother found an agent to represent all of the children and found a job working as a secretary at NBC. At first, Phoenix landed a few commercials. He then got a role as the youngest brother on the television series Seven Brides for Seven Brothers in 1982. While the show only lasted one season, Phoenix continued to work, making a number of guest spots on other shows, such as Hotel and Family Ties. He also had a notable role in the 1985 television movie Surviving.

That same year, Phoenix made his film debut playing a young inventor in Explorers (1985), with Ethan Hawke. His next film, however, led to a career breakthrough: In Stand by Me (1986), four friends (Phoenix, Wil Wheaton, Corey Feldman, and Jerry O’Connell) set out to find the body of a missing teenager. Phoenix earned raves for his performance as a youth with a troubled home life in this coming-of-age adventure drama based on the novella by Stephen King.

'The Mosquito Coast,' 'Running on Empty'

Phoenix next appeared as Harrison Ford’s son in The Mosquito Coast (1986), which received mixed reviews. In 1988, he appeared in a trio of films: Little Nikita, A Night in the Life of Jimmy Reardon and Running on Empty. Of the three, Running on Empty was the most critically successful. As the son of 1960s radicals (Christine Lahti and Judd Hirsch), Phoenix's character is a musically gifted teenager who must decide between staying with his family on the run and leaving them to follow his own dreams. His girlfriend in the film was played by Martha Plimpton, and she and Phoenix became involved off-screen as well.

Directed by Sydney Lumet, Running on Empty earned many accolades, with critic Roger Ebert calling it “one of the best films of the year.” Phoenix received his first and only Academy Award nomination for his work on the film.

'Indiana Jones and the Last Crusade,' 'I Love You to Death'

Phoenix reteamed with Ford for the 1989 box office hit Indiana Jones and the Last Crusade, which was directed by Steven Spielberg. In the film, he played the famed adventurer in his youth. After this brief sojourn into the action genre, Phoenix tried his hand at comedy with I Love You to Death (1990). His character helps a scorned wife (Tracey Ullman) try to bump off her cheating husband (Kevin Kline) and even hires two drug-addled henchmen (William Hurt and Keanu Reeves) to assist in the task.

'My Own Private Idaho,' 'Dogfight'

Tackling much more weighty material, Phoenix co-starred with Reeves in Gus Van Sant’s My Own Private Idaho (1991). He played a narcoleptic male prostitute who wants to find his long-lost mother and develops a special friendship with a fellow hustler. Phoenix earned strong reviews for his riveting performance in the film. That same year, he proved to be equally compelling and convincing as a Marine just about to go to Vietnam in Dogfight, with Lili Taylor.

Phoenix then took a supporting role in the comedic thriller Sneakers (1992), proving he could hold his own on screen alongside such established performers as Robert Redford, Sidney Poitier and David Strathairn. For his last completed film, Phoenix starred with Alan Bates, Richard Harris and Dermot Mulroney in Sam Shepard’s western Silent Tongue (1994).

Acting, however, was just one part of Phoenix’s life. A strong supporter of animal rights, he became a vegetarian at the age of 8. “When I was old enough to realize all meat was killed, I saw it as an irrational way of using our power, to take a weaker thing and mutilate it,” Phoenix told The New York Times in 1989. He became a devout vegan, eschewing all dairy products because of how the animals were treated. An ardent environmentalist, Phoenix supported such organizations as Earth Save and Earth Trust.

Music was another one of Phoenix’s passions. With his sister Rain, he formed the band Aleka’s Attic. He wrote many songs for the group, which recorded a few tracks but never released an album. With The Thing Called Love (1993), Phoenix got a chance to combine acting with music, playing a singer who wants to make it in Nashville. He even contributed one of his own songs to the soundtrack. The film also starred Samantha Mathis as his love interest, and the two started dating.

Phoenix had started work on Dark Blood, with Jonathan Pryce and Judy Davis, when tragedy struck. During a break in filming, Phoenix went out to the Viper Room, a popular nightclub that was partly owned by Johnny Depp, with his brother Joaquin, his sister Rain and his girlfriend Samantha Mathis.

At some point during the evening, Phoenix took a cocktail of drugs and became seriously ill. He was helped outside and began to have seizures. Joaquin called 911 while Rain tried to help Phoenix, who was lying on the sidewalk. When the ambulance arrived, paramedics worked on resuscitating the young actor at the scene. Their efforts failed, and they transported him to Cedars-Sinai Medical Center where he was declared dead in the early hours of October 31, 1993.

On November 12, the Los Angeles County coroner’s report revealed that Phoenix died from “acute multiple drug intoxication” including deadly amounts of cocaine and morphine. Traces of marijuana, prescription Valium and an over-the-counter cold medicine, were also found in his system. His death was ruled an accident and no foul play was involved.

Family, friends and fans mourned the untimely passing of the talented young star. He was only 23 years old. After his death, Ford said “He once played my son, and I came to love him like a son, and was proud to watch grow into a man of such talent and integrity and compassion,” according to The New York Times. A memorial service was held for Phoenix and his ashes were scattered at the family’s Florida ranch.

In September 2020, brother Joaquin named his first-born son after the actor.