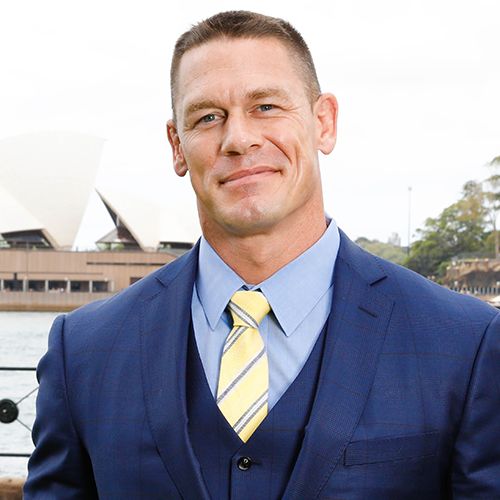 Who Is John Cena?

John Cena is a professional wrestler, actor and television personality. Calling himself "The Prototype," he captured the UPW title in 2000. In 2001, he signed a contract to work at Ohio Valley Wrestling. Cena claimed the OVW heavyweight title in February 2002, then made his WWE debut that June. Two years later, he took the United States Championship. The wrestler has since expanded his brand through the release of a hip-hop album and appearances on TV and film.

At an early age, Cena showed a passion for sports and working out. By the time he was 15, he was a regular gym rat and after graduating high school, Cena headed off to Springfield College in Massachusetts to study exercise physiology and prove his worth on the football field. At Springfield, Cena turned himself into a Division III All-American offensive lineman and team captain.

In 2000, the new college graduate left Massachusetts despite his father's wishes, seeking a new life in California as a bodybuilder. It wasn't an easy transition for the 6-foot 1-inch aspiring star. He had just $500 in his pocket to make it across the country and get settled. To make ends meet, he folded towels and cleaned toilets at a Gold's Gym in Venice Beach. Since he couldn't afford an apartment, he shacked up in his 1991 Lincoln Continental.

Cena's turning point came in early 2000, during a casual conversation he had with a wrestler at Gold Gym's who encouraged him to take classes at Ultimate Pro Wrestling (UPW), a former World Wrestling Entertainment developmental company.

For Cena, the suggestion of making a go of it as a wrestler was not an entirely outlandish idea. His father, John Sr. (a.k.a. Johnny Fabulous), made a living as a wrestling announcer and businessman. As a kid growing up in suburban Massachusetts, the younger Cena spent many hours glued to the television set as he watched his wrestling heroes such as Hulk Hogan, Ultimate Warrior and Shawn Michaels go at it in the ring.

As a wrestler himself, Cena's ascension was rapid. Calling himself "The Prototype," the ambitious Cena captured the UPW title on April 27, 2000, in San Diego, California. Over the course of the next year, Cena drew the attention of WWE executives, and in 2001, the young entertainer signed a developmental contract with the company to work at Ohio Valley Wrestling (OVW).

Cena captured the OVW heavyweight title in February 2002, then made his WWE debut that June when he signed up with the Smackdown roster. Just two years later, Cena took home the United States Championship, defeating The Big Show in March 2004 in Wrestlemania XX.

In the years since, Cena has notched many wins and titles. In 2007, he became the first wrestler to ever come up victorious against Edward "Umaga" Fatu.

Along the way, Cena, whose good looks and sculpted body inspired the nickname "The Marky Mark of Wrestling," greatly increased his celebrity. Like Hogan, Cena proved that his showmanship in the ring translated to success in other venues.

Through the production wing of WWE, Cena starred in the action films The Marine (2006) and 12 Rounds (2009), the latter featuring the wrestler trying to save his girlfriend from a gang of terrorists in New Orleans.

In addition, Cena, who has long had an affinity for hip-hop culture, became a recording artist when his rap album, You Can't See Me, hit record stores in 2005. The recording debuted on the U.S. Billboard 200 chart at No. 15.

In 2015, Cena received critical praise for his acting skills in the hit comedy Trainwreck, directed by Judd Apatow and written by the film's star, Amy Schumer. Cena played Schumer's muscle-bound but sensitive boyfriend. “I got my chance to throw my sense of humor out into the world, and at the same time play this hulky guy who’s a softy, which in real life I’m a very emotional guy,” Cena told Business Insider. Later that year he appeared in the Tina Fey-Amy Poehler comedy Sisters and had a small role in Daddy's Home.

Devoting more time to his screen pursuits, Cena in 2017 co-starred in the war film The Wall, voiced the titular bull of the animated Ferdinand and rejoined Will Ferrell and Mark Wahlberg for Daddy's Home 2. The following year, he enjoyed a prominent role in the raunchy comedy Blockers, before returning to action fare with the Transformers spinoff Bumblebee. Cena then joined Keegan-Michael Key and John Leguizamo to play a trio of wildfire fighters flummoxed by unruly kids in the 2019 family comedy Playing with Fire.

'Are You Smarter than a Fifth Grader?' Host

Also in 2019, it was announced that Cena would host a new version of the game show Are You Smarter than a Fifth Grader?, a gig previously belonging to comedian Jeff Foxworthy. Prior to its debut in June, Cena pointed out the similarities between entertaining audiences as a wrestler and as a TV personality, and said the latest version of the show would focus more on the kids than the adult contestants.

Cena married his girlfriend, Elizabeth Huberdeau, in July 2009. In May 2012, Cena filed for divorce, allegedly shocking Huberdeau. Their messy separation played out in the media, but they eventually settled in July of that year.

In 2012, Cena began dating fellow WWE superstar Nikki Bella. On April 2, 2017, he proposed to Bella after they defeated The Miz and Maryse in a tag team match at Wrestlemania 33. Cena and Bella ended their engagement in April 2018, and briefly reconciled before it was reported that they had again gone their separate ways.