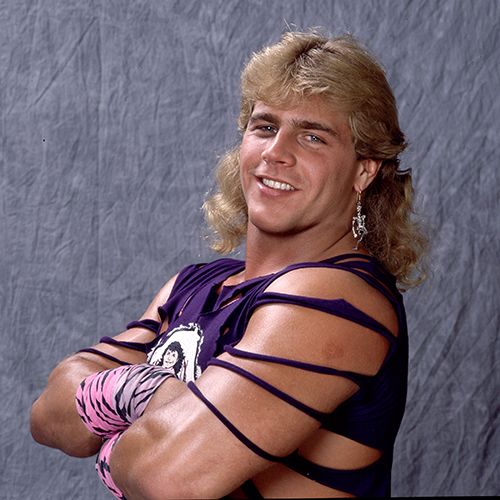 Who Is Shawn Michaels?

Growing up in a military family, Shawn Michaels moved around frequently before settling in San Antonio, Texas. Although his high school didn’t have a wrestling team, Michaels decided at 12 years old that he wanted to be a professional wrestler. After later dropping out of Southwest Texas State University, he made his professional wrestling debut in October 1984. He and tag team partner Marty Jannetty wrestled as The Midnight Rockers in the AWA before joining the now WWE as The Rockers. The duo parted ways in 1992, and Michaels took on the “Heartbreak Kid” persona, competing until he suffered a serious back injury in 1998. Following four years in retirement, Michaels returned to the WWE in 2002 and continued to wrestle until 2010. The WWE Hall of Famer has a wife named Rebecca, with whom he shares two children.

Born Michael Shawn Hickenbottom on July 22, 1965, Michaels is the son of Dick and Carol Hickenbottom. Because Michaels’ father was an Air Force pilot, he spent his childhood moving from the United Kingdom to Maryland, before settling in San Antonio, Texas when he was about 8 years old. His parents described him as a well-loved, quiet and shy boy, who was heavily involved in sports, including football. Michaels recalls deciding he wanted to be a professional wrestler someday when he was 12, though his high school didn’t have a wrestling team. His father was an amateur wrestler at the University of Iowa, and he also grew up idolizing such pros as Ric Flair.

Michaels began training with Mexican wrestler Jose Lothario in 1983, and before making his pro debut with the National Wrestling Alliance's (NWA) Mid-South Wrestling territory in October 1984. He later joined with tag team partner Marty Jannetty to form The Midnight Rockers, and they won their first American Wrestling Association (AWA) world championship in 1986. Renamed The Rockers in 1987, Michaels and Jannetty joined and were fired from the WWE in 1987 after just one day following a Buffalo, New York bar fight.

After their WWE dismissal, the duo joined Continental Championship Wrestling (CCW) in Birmingham, Alabama, where Michaels says they wrestled in front of 25 people for $300 per week. The WWE rehired The Rockers in 1988 on a probationary basis, and they won the later-rescinded Tag Team Championship in October 1990. (The WWE never aired their championship match against Bret Hart and Jim Neidhart because a top rope had broken mid-event.)

Michaels ended his and Jannetty’s partnership by smashing his partner’s head through a window during a 1992 episode of Brutus Beefcake's talk show. The breakup marked the beginning of Michaels’ villain persona.

As the vain and arrogant Heartbreak Kid, Michaels, who described his character as “sort of an Elvis meets Freddie Mercury,” won the Intercontinental Championship before he was suspended for testing positive for steroids. Michaels unsuccessfully attempted to reclaim the title in 1994 during a famous ladder match with Razor Ramon at WrestleMania X.

After meeting him in a locker room in 1993, Michaels recruited Kevin Nash to take on the role of his bodyguard and eventually won his first world championship at WrestleMania XII in March 1996. Michaels and Nash also became part of “The Kliq,” along with Scott Hall, Sean Waltman and Paul Michael “Triple H” Levesque. He announced in February 1997 that he was retiring due to a knee issue, but decided to return to action several months later.

Upon his return, Michaels formed Generation X with Triple H and Chyna. His intensifying feud with Bret “Hit Man” Hart reached its peak in what became known as the “Montreal Screwjob” of the 1997 Survivor Series, which was also Hart’s final WWE match before leaving the company. During a January 1998 Royal Rumble match with The Undertaker, Michaels blew a disc in his back, and a doctor told him he’d never wrestle again. He recalls asking for enough drugs to get him to his final WrestleMania XIV match with "Stone Cold" Steve Austin.

After battling drug and alcohol addiction for about a decade, Michaels started a family in San Antonio, got sober, and found religion. More than four years into his retirement, Michaels says he prayed his back pain away, and returned to professional wrestling at SummerSlam 2002 in a match with Triple H. He went on to wrestle for eight more years before a final watch with The Undertaker at WrestleMania XXVI in March 2010.

Since retiring from the ring, Michaels has served as a key contributor to NXT, which he says began as a developmental brand that grooms WWE superstars.

After seeing her on TV as a WCW “Nitro Girl” named Whisper in June 1998, Michaels pursued now-wife Rebecca Curci Hickenbottom. The pair dated for just several weeks before marrying at the Graceland Wedding Chapel in Las Vegas. They are parents to a son, Cameron, and daughter, Cheyenne.