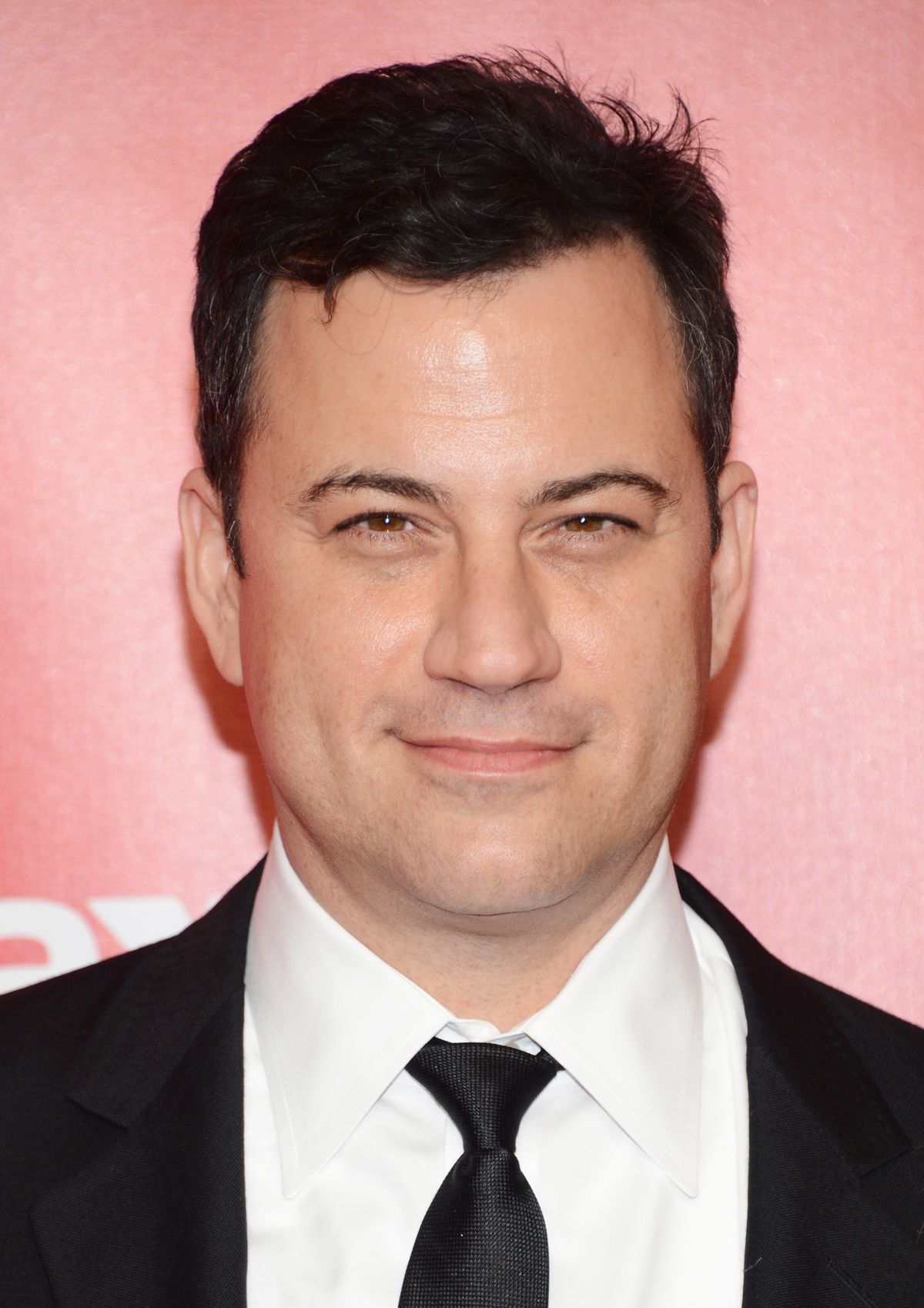 Who Is Jimmy Kimmel?

In 1997, Jimmy Kimmel made the leap from radio to television, as host of the game show Win Ben Stein's Money. Two years later, he established a production company called Jackhole Industries. Once he had several hit shows under his belt, ABC showed an interest in him as a potential late night host. Jimmy Kimmel Live! hit the air in 2003 and, to date, is ABC's longest-running late night talk show in its history.

Television personality and comedian Jimmy Kimmel was born James Christian Kimmel in Brooklyn, New York, on November 13, 1967. When he was just nine years old, Kimmel moved with parents Jim and Joan, and siblings Jonathan and Jill, to Las Vegas. The eldest of three, young Kimmel proved to be a meticulous artist and an excellent student, earning straight A's throughout high school. It was during his teenage years that Kimmel discovered his idol: David Letterman.

Kimmel's first real foray into performance was as a college radio disc jockey. After testing the airwaves at UNLV and Arizona State University, Kimmel began his professional radio career at age 21. Bouncing from market to market in cities like Seattle, Phoenix and Tucson, Kimmel eventually found a home at Los Angeles' famed KROQ, working as "Jimmy the Sports Guy" on The Kevin and Bean Show.

In 1997, Kimmel made the leap to television, debuting on the small screen as the host of Comedy Central's game show, Win Ben Stein's Money. Kimmel provided a comic counterpoint for the show's eponymous challenger. Stein and Kimmel won a 1999 Daytime Emmy for Best Game Show Host and a Daytime Emmy nomination in 2001.

Two years into his game show success, Kimmel, in cooperation with longtime friends Adam Carolla and Daniel Kellison, established a production company under the name Jackhole Industries. The trio began developing comedy shows through Jackhole, and pitching them to various networks. In 1999, the company pitched one of its projects, The Man Show, to Comedy Central. Billed as the "anti-Oprah," the half-hour comedy show glorified testosterone and featured beer chugging, models bouncing on trampolines, and unabashed toilet humor. Hitting new heights in puerile comedy, the show was a runaway success for the network and led to Kimmel's frequent appearances as a commentator on Fox NFL Sunday.

After their Man Show achievements, Kimmel and his company created the 2002 show, Crank Yankers, on Comedy Central. The show depicted puppets acting out previously recorded prank phone calls voiced by comic celebrities such as David Alan Grier, Dane Cook, Seth MacFarlane, Wanda Sykes, Sarah Silverman and even Kimmel's own children. Other shows followed such as the Sports Show with Norm Macdonald and The Andy Milonakis Show.

With several hit shows under his belt, ABC showed an interest in Kimmel as a potential late night host in the early 2000s. Jimmy Kimmel Live! debuted on January 26, 2003, to mediocre reviews. However, thousands of episodes later, Kimmel has earned the respect of A-list guests and beat out rival late-night talk shows in the ratings. Over the show's decade-long run, ABC has repeatedly extended Kimmel's contract due to his continued success as a host. In 2012, the network announced that it would move Jimmy Kimmel Live! to an earlier time slot to compete against NBC's The Tonight Show with Jay Leno.

In September of 2013, Kimmel made a spoof of an interview that rapper Kanye West had with Britain's BBC on his show Jimmy Kimmel Live! In response, West released a tirade of tweets about Kimmel. Kimmel also announced that he spoke to West on the phone afterwards, with West saying that Kimmel's life would be much better if he apologized. Kimmel later brought the rapper on his late-night talk show, where the two resolved their very public Twitter war.

Kimmel hasn't shied away from using his platform to express disdain for certain public figures, including former Alabama Supreme Court Chief Justice Roy Moore, who saw allegations of sexual misconduct surface when he was running for the U.S. Senate in 2017. When Moore suggested on Twitter that they could settle their differences "man to man," Kimmel told his audience that he was more than happy to accept that challenge.

Like his late-night talk show rivals, Kimmel took to hosting a stripped-down version of his show from home during the coronavirus outbreak in 2020, announcing that each quarantine edition would raise money for a different organization.

Emmys, Oscars and 'Who Wants to Be a Millionaire' Host

In April 2020, Kimmel began hosting a revival of the game show Who Wants to Be a Millionaire with celebrity contestants.

Kimmel married his college sweetheart Gina Maddy in 1988, and they have a son, Kevin, and daughter, Katherine. As Kimmel's show and career thrived, his marriage began to dissolve. In 2002, Gina filed for divorce, and Kimmel became closer to friend and Crank Yankers co-star Sarah Silverman. The two began dating shortly thereafter, making an alternately sweet and antagonistic team — one with an unusual penchant for sharing personal details in a highly public way.

Kimmel and Silverman briefly split in 2008, and after reuniting later that year, the couple broke up a second and final time in 2009. Shortly after the break-up, Kimmel made a TV appearance on The View. Asked why the relationship ended, he said, "What do you mean, what happened? Look at me. What do you think happened? I'm a 41-year-old man with a bra filled with Koosh balls. I'm an imbecile. She couldn't date an imbecile anymore." Kimmel and Silverman remain close friends.

That same year Kimmel began dating Molly McNearney, a co-head writer on Jimmy Kimmel Live! In August 2012, the couple announced their engagement and they married in July 2013. Kimmel and McNearney welcomed their first child together, daughter Jane, on July 10, 2014, and son William "Billy" Kimmel on April 21, 2017.

Kimmel revealed in an emotional monologue on his show that his son Billy was born with a serious heart condition and underwent open heart surgery three hours after his birth. He also used the opportunity to talk about the importance of affordable healthcare in the United States and coverage of pre-existing conditions. "If your baby is going to die and it doesn't have to, it shouldn't matter how much money you make," he said. "I think that's something that whether you're a Republican or a Democrat or something else, we all agree on that, right?"

In September 2017 Kimmel made headlines again when Republicans made another attempt to repeal Obamacare through the Graham-Cassidy Bill. Kimmel called out Cassidy, saying the Louisiana senator "just lied right to my face," in reference to when the politician had recently appeared on his late night show and discussed healthcare issues.

Kimmel added: “I don’t know what happened to Bill Cassidy. But when he was on this publicity tour, he listed his demands for a healthcare bill very clearly. These were his words. He said he wants coverage for all, no discrimination based on pre-existing conditions, lower premiums for middle-class families and no lifetime caps. Guess what? The new bill does none of those things.”

In an unprecedented move, especially for a late night talk show host, Kimmel encouraged his viewers to call their representatives on Capitol Hill to vote the bill down. A media firestorm ensued, with politicians and pundits all reacting to the late night host's takedown on Cassidy and commentary in the healthcare debate.

On December 4, ABC announced that 7-month-old Billy Kimmel had undergone a successful second heart surgery. His dad was scheduled to take some time off to be with the family, with stars like Chris Pratt, Tracee Ellis Ross, Neil Patrick Harris and Melissa McCarthy lined up to fill in as hosts of Jimmy Kimmel Live! for the week.

Kimmel made his return to the show on December 11 with Billy in his arms, saying his son was "doing great" just one week after surgery. He went on to thank the doctors at the Children’s Hospital in Los Angeles and again turned his ire toward politicians, for not funding the Children's Health Insurance Program (CHIP) in the recently approved Senate tax bill.