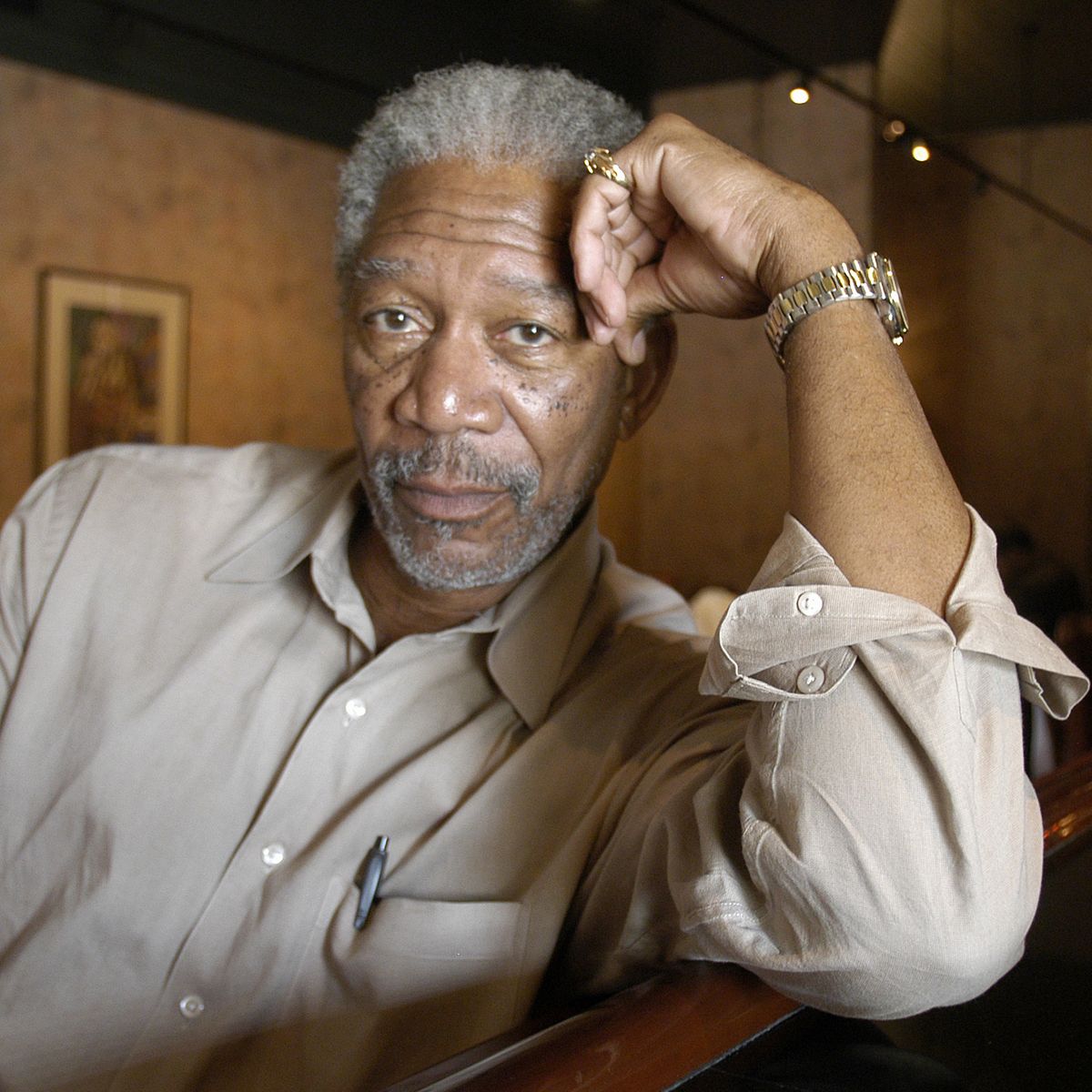 Who Is Morgan Freeman?

Morgan Freeman joined the Air Force after high school to become a fighter pilot. He later realized it wasn't what he'd wanted and thus, began his acting career. After years of small parts and limited success, he began to land big roles and win critical and popular acclaim. He's now one of Hollywood's most respected stars.

Freeman was born on June 1, 1937, in Memphis, Tennessee. The youngest of five children born to barber Morgan Porterfield Freeman, Sr. and schoolteacher Mayme Edna, Freeman was raised in Chicago and Mississippi in a low-income home. Not long after he was born, Morgan's parents, like so many other African Americans struggling under the pressures of the Jim Crow South, relocated to Chicago to find work. While his parents looked for jobs, Freeman remained with his maternal grandmother in Charleston, Mississippi.

At the age of 6, Freeman's grandmother died and he moved north to be with his mother, who had already separated from her alcoholic husband. They later moved to Tennessee and eventually back to Mississippi, where Mayme Edna settled her family in Greenwood.

As a kid, Freeman spent a good portion of his time scraping together enough money to see movies, where he formed an early admiration for actors like Gary Cooper, Spencer Tracy and Sidney Poitier. It was by chance that Freeman himself got into acting. He was in junior high school and, as punishment for pulling out a chair from underneath a girl he had a crush on, Freeman was ordered to participate in the school's drama competition. To his surprise, and probably school administrators, the 12-year-old proved to be an immediate natural on the stage, taking top honors in the program.

But while Freeman loved to act, flying — in particular the idea of being a fighter pilot—was in his heart of hearts. And so, upon graduating high school in 1955, Morgan turned down a partial drama scholarship and joined the U.S. Air Force. The military, though, proved to be much different than what he'd expected. Instead of darting around the skies, Freeman was relegated to on-the-ground activity as a mechanic and radar technician. He also realized that he didn't want to be shooting down other people.

"I had this very clear epiphany," he told AARP Magazine. "You are not in love with this; you are in love with the idea of this." In 1959, Freeman left the Air Force and tried his fortunes out West, moving to Hollywood to see if he could make it as an actor. It wasn't an easy life. He took acting classes and struggled to find work. In the early 1960s, he moved again, this time to New York City, where more petty day jobs and nighttime auditions followed.

In 1967, the same year he married Jeanette Adair Bradshaw, Freeman's big career break came when he landed a part in an all African American Broadway production of Hello, Dolly! starring Pearl Bailey. Around that time, Freeman also performed in an off-Broadway production of The Nigger Lovers.

Some national exposure followed in 1971 when he started appearing regularly on The Electric Company, a public television-produced children's TV show that focused on teaching kids how to read. On a show that included such current and future stars as Rita Moreno, Joan Rivers and Gene Wilder, Freeman had some of the show's more memorable characters, like "Easy Reader," "Mel Mounds" and "Count Dracula."

But television proved to be a grueling and demanding life for Freeman. Despite some stage work, including a Tony-nominated performance in The Mighty Gents in the late 1970s, Freeman couldn't seem to break into movies like he wanted. When The Electric Company was canceled in 1976, Freeman saw himself staring at a career that was far from grounded. His personal life was hurting, too. Long before the show ended, Freeman found that his marriage had started to fall apart, and he began drinking too much. Freeman and Jeanette divorced in 1979.

A year after his divorce, Freeman's career caught a break when he landed a part as a crazed inmate in the Robert Redford film, Brubaker (1980). However, the steady stream of film work he hoped would follow did not materialize, and Freeman was forced to retreat back to television for two hard years on the cast of the soap opera Another World.

For much of the rest of the decade, Freeman took on roles that earned him some acclaim — but not the big, powerful jobs that would garner A-list attention. There was a part in the 1984 Paul Newman film Harry and Son, and he was narrator for the TV mini series, The Atlanta Child Murders among other roles.

In 1987, Freeman's fortunes changed when he was cast in the film Street Smart, which placed the actor on the screen as the volatile pimp Fast Black. The role proved to be huge success for Freeman, earning him an Oscar nomination for Best Supporting Actor. Film critic Pauline Kael even went so far as to ask out loud, "Is Morgan Freeman the greatest American actor?" Two years later, Freeman earned more acclaim — a Golden Globe Award for Best Actor and a second Oscar nomination — as the kind-hearted but stubborn chauffeur in 1989's Driving Miss Daisy. That same year he also starred in Edward Zwick's critically acclaimed Glory, a drama about the 54th Massachusetts Infantry Regiment, which was one of the first recognized African American units in the Civil War. By the 1990s, Freeman was riding high in his career, starring in such big budget films as 1994's The Shawshank Redemption, Seven (1995) and Deep Impact (1998).

With his booming voice and commanding presence, Freeman was a natural to play God in the 2003 comedy Bruce Almighty and its 2007 sequel Evan Almighty.

In 2005, Freeman won an Oscar for Best Supporting Actor in Clint Eastwood's Million Dollar Baby. He later reprised his roles as Lucius Fox from Batman Begins (2005) for the blockbuster sequels The Dark Knight (2008) and The Dark Knight Rises (2012). He also appeared in Rob Reiner's The Bucket List (2007) and the action-thriller Red (2010), costarring Bruce Willis.

At the 2012 Golden Globes, Freeman received the Cecil B. DeMille Award for "outstanding contributions to the world of entertainment."

"I like being eclectic," he has said about his film choices. "The more varied the better; the wider the range. I've been sucked into a kind of mold of a good guy and that's actually almost beyond my ability to control. But other than that, a good story and an interesting character is all I am looking for."

Freeman's eloquent, distinctive voice has also made him a natural for narration. His voice can be heard on such memorable films as War of the Worlds and the Academy Award-winning documentary March of the Penguins. In 2010 he also replaced Walter Cronkite's voice to introduce news anchor Katie Couric on the CBS Evening News.

In 2009, Freeman teamed up with Eastwood again, playing the role of South African President Nelson Mandela in Invictus — the role earned him an Oscar nod for Best Actor. A few years later, he appeared in the action-thriller Olympus Has Fallen (2013), the sci-fi film Oblivion (2013), the comedy Last Vegas (2013), the sci-fi blockbuster Lucy (2014) and did voice work for the animation The Lego Movie (2014). In 2015, he played the Chief Justice of the United States on the television show Madam Secretary, for which he is also an executive producer.

The following year in September 2016, President Barack Obama presented Freeman with a National Medal of Arts. At the ceremony, President Obama said Freeman was being honored "for his outstanding work as an actor, director, and narrator. His iconic stage and screen performances have brought to life characters from the whole spectrum of the human experience, moving audiences around the world, and influencing countless young artists."

Freeman reprised his role as Allan Trumbull in 2016's London Has Fallen and 2019's Angel Has Fallen.

While it may be a late-blooming success, it's nothing he's at all bitter about. "Success comes when it comes," he has said. "I had a career for 30 years; a 30-year career is not bad. I often think I'm probably lucky that I wasn't a wild success early on, coming up through the 1970s. I could have very easily burned out."

In 1997, Freeman co-founded the movie production company Revelations Entertainment, including its online movie distribution company, ClickStar. He has also launched a host of charitable endeavors. The actor, who resides in the Mississippi Delta, raised money for Katrina victims not long after the devastating hurricane ripped through the area. Through Rock River Foundation, an organization he started, Freeman's group has donated millions to educational programs. And in 2004 he helped organize relief funds for hurricane victims in Grenada. After hearing about the decline of honeybees and its devastating impact on the environment, Freeman turned his 124-acre ranch into a beekeeping sanctuary in July 2014.

Freeman's energy extends into other realms, too. In his home state of Mississippi, the actor co-founded a blues club in Clarksdale. In recent years Freeman also earned his pilot's license.

Freeman's personal life has experienced a bit of turbulence in recent years. He and his second wife, Myrna, split in 2007, and he was in a near-fatal car accident in Charleston, Mississippi the following year. But among his setbacks, none was as tragic than in August 2015, when he discovered that his step granddaughter, E'Dena Hines, whom he and Myrna had adopted, was murdered by her boyfriend in New York City.

“The world will never know her artistry and talent, and how much she had to offer,” Freeman said in a statement to People. “Her friends and family were fortunate enough to have known what she meant as a person."

Yet, despite such difficult times, the actor has continued to work and shows no signs of slowing down. His choice of roles, as well as his off-the-screen demeanor, have earned him respect from even those not used to pouring out praise for their interview subjects.

"He's a delightful man," said Mike Wallace, who interviewed the actor for a 2006 piece on 60 Minutes. "He's a thoughtful man. He's in no sense a bitter man. He's still exploring his life and times. I have immense respect for Morgan Freeman."

On May 24, 2018, CNN reported that eight women have accused Freeman of sexual harassment and inappropriate behavior. One of those women, a production assistant on his 2015 movie Going In Style, claims he "kept trying to lift up my skirt and asking if I was wearing underwear." Another of the alleged victims, a senior member of the production staff on 2013's Now You See Me, told CNN, "He did comment on our bodies... We knew that if he was coming by ... not to wear any top that would show our breasts, not to wear anything that would show our bottoms, meaning not wearing clothes that [were] fitted."

Freeman subsequently issued a statement: "Anyone who knows me or has worked with me knows I am not someone who would intentionally offend or knowingly make anyone feel uneasy. I apologize to anyone who felt uncomfortable or disrespected — that was never my intent."

A few days later, Freeman's lawyer sent a letter to CNN president Jeff Zucker, demanding a retraction and apology for the "malicious intent, falsehoods, sleight-of-hand, an absence of editorial control, and journalistic malpractice" that was "used to unjustly attack" his client. CNN promptly fired back with a statement that defended its reporting.