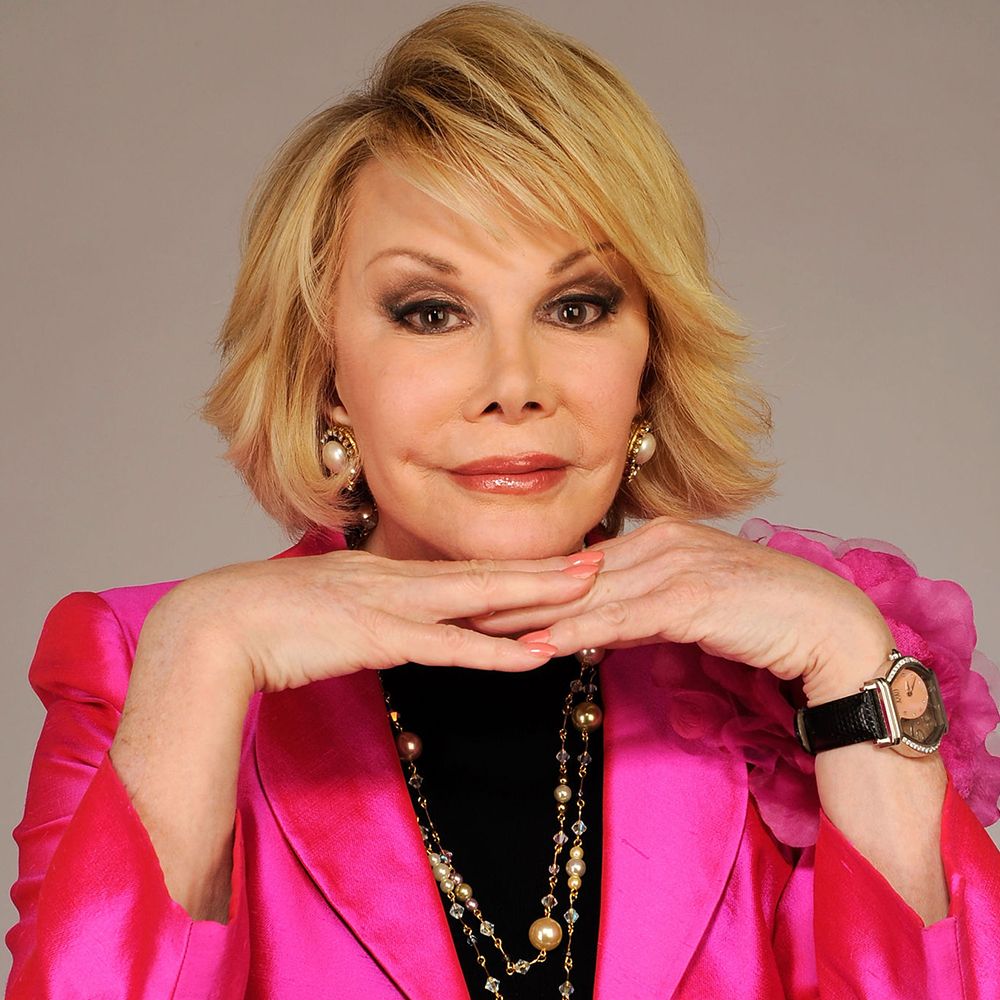 Who Was Joan Rivers?

Joan Rivers's big break came in 1965: a booking on The Tonight Show Starring Johnny Carson. She became an instant hit, and her first syndicated talk show on daytime television, "That Show" with Joan Rivers, combined with appearances on Carson and The Ed Sullivan Show, made Rivers a household name.

The daughter of Russian immigrant parents, Joan Rivers — originally Joan Alexandra Molinsky — was born on June 8, 1933, in Brooklyn, New York. She was the youngest of two daughters, and her father was a doctor who had a great sense of humor. The Molinsky family eventually moved out to Larchmont, a suburb of New York City.

Rivers attended Barnard College, where she pursued her interest in performing. She appeared in numerous campus productions during her time there. After graduation, however, Rivers abandoned her dreams of being an entertainer for a more practical career. She went to work as a buyer for a chain store and eventually fell in love with the owner's son. But this relationship didn't last—the couple split up six months after tying the knot.

Rivers returned to her passion for performing. Determined to succeed, she appeared in a number of small plays, including a role as a lesbian opposite an equally unknown Barbra Streisand. When it became apparent that acting was not her forte, she switched to comedy and spent the next seven years doing the rounds of New York's comedy clubs.

Her years as a struggling performer in the coffeehouses of Greenwich Village gave Rivers the experience she needed, and her big break finally came along in 1965: A booking on The Tonight Show Starring Johnny Carson ignited her career, as she was an instant hit. 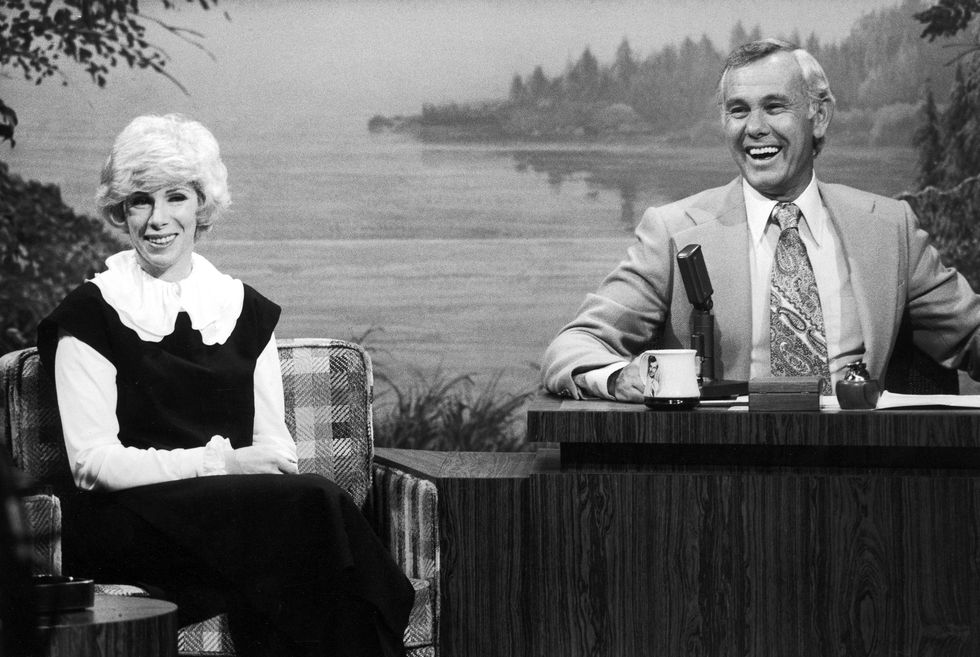 Her Own TV Series: 'That Show'

In the late 1960s, Rivers landed her own program called "That Show" with Joan Rivers (also known as The Joan Rivers Show), which featured guests like Florence Henderson, Soupy Sales and Jerry Lewis. She also continued to appear on Carson's program as well as The Ed Sullivan Show. Before long, Rivers became a household name.

Around this time, Rivers tried her hand with movie work. She had a small part in the 1968 film The Swimmer with Burt Lancaster. Working behind the camera, Rivers co-wrote a 1973 television movie called The Girl Most Likely To and later directed her first film, Rabbit Test (1978), starring Billy Crystal.

By 1983, Rivers was headlining Las Vegas, had a Grammy Award-nominated comedy album and two best-selling books. That same year, she became Carson's permanent guest host. Rivers' relationship with Carson would sour only a few years later, however, when FOX offered the comedian her own late-night talk show—which was to be a direct competitor to Carson's show—and she accepted. The series, entitled The Late Show Starring Joan Rivers, began airing in October 1986 and was canceled the following year. According to Rivers, Carson was so infuriated by her decision to leave his show for her own, without consulting him first, that he never spoke to her again. Rivers has maintained that she left The Tonight Show because of a conflict with NBC, not Carson, whom she's called a father figure as well as "the man who handed me my career."

Rivers suffered a series of career setbacks during this period. Her show was canceled and the entertainment industry turned its back on her. Additionally, Rivers lost her husband and producer of 22 years, Edgar Rosenberg; he committed suicide in 1987.

Gutsy and determined, Rivers moved back to New York and began rebuilding her life and career. Around 1989, she launched her own syndicated daytime talk show. She went on to win an Emmy Award and a star on the Hollywood Walk of Fame (1990). Later, in 1994, she co-wrote and starred in Sally Marr...and Her Escorts, which garnered her a Tony Award nomination for best actress.

Rivers also established herself as an entertainment commentator, serving as host of the E! series Live from the Red Carpet from 1996 to 2004. No celebrity was spared from her quips and cracks during her tenure.

READ MORE: How Joan Rivers Bounced Back After Late-Night Rejected Her and Her Husband's Suicide

'Joan & Melissa' and Other Recent Projects

In her 80s, Joan Rivers continued to juggle a number of different ventures. She designed and sold her own line of costume jewelry and other products on QVC. And in 2010, she was the subject of an acclaimed documentary, Joan Rivers: A Piece of Work.

Rivers remained a popular TV personality, as well. She served as host of Fashion Police, which allowed her to continue to critique celebrities on the red carpet, and she had her own reality TV show Joan & Melissa: Joan Knows Best? (2011-14), which also featured her daughter Melissa.

Rivers continued to enjoy success as a writer as well, publishing I Hate Everyone...Starting With Me, in 2012, and Diary of a Mad Diva, in 2014. She maintained a career as a stand-up comedian, playing numerous shows each year.

In August 2014, Rivers underwent surgery on her vocal cords in a New York medical clinic. Rivers stopped breathing during the procedure and was rushed to New York's Mount Sinai Hospital. News reports indicated that Rivers went into cardiac arrest and then was placed in a medically induced coma and on life support. On September 1, it was reported that Rivers was slowly being taken out of the coma. Her daughter Melissa Rivers released a statement through the hospital, thanking "everyone for the overwhelming love and support" for her mother.

Melissa Rivers released a statement saying her mother, Joan Rivers, died peacefully surrounded by family and close friends on September 4, 2014, at the age of 81.

In October 2014, the New York City medical examiner’s office released its report on the official cause of Rivers’ death saying the comedy legend died of brain damage due to lack of oxygen and that the manner of death was a predictable “therapeutic complication.” Rivers had been sedated with the anesthetic propofol during a routine medical procedure to examine her voice and treat an acid reflux condition.