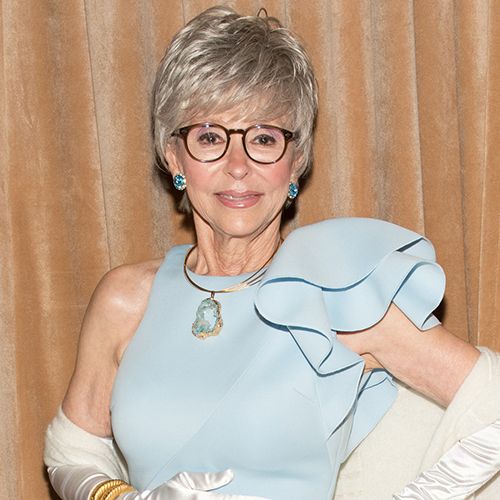 Who Is Rita Moreno?

Rita Moreno is best known as Anita in West Side Story in 1961, a role that earned her an Oscar for Best Supporting Actress, making her the first Latina actress to win the honor. Moreno also appeared on the children's shows Sesame Street and The Electric Company and is one of only 11 people to have received the four major entertainment honors — Emmy, Oscar, Tony and Grammy awards (EGOT). In 2019, she added another letter to her list of accolades when she became the first Latino honored with a Peabody Award, making her a PEGOT.

Born Rosa Dolores Alverio on December 11, 1931, in Humacao, Puerto Rico, Moreno has broken new ground for Latinos in the field of entertainment throughout her career. Moreno began her career in show business at early age. She appeared on Broadway and in her first film role in her early teens, and left school around the same time.

Moreno is perhaps best known for her work in West Side Story (1961), a modern musical inspired by Shakespeare's Romeo and Juliet. A versatile performer, she had to sing, dance and handle very dramatic scenes during the course of the film. She won an Academy Award for Best Supporting Actress for her portrayal of Anita, the tough but vulnerable girlfriend to the Sharks's gang leader — becoming the first Hispanic actress to win a Best Supporting Actress Oscar.

Other Achievements and EGOT Status

After her success with West Side Story, Moreno took on a range of interesting roles on stage and in films. She performed with the likes of Marlon Brando, Jack Nicholson and James Garner. Her career took another interesting turn in the 1970s, when joined the cast of The Electric Company, a children's television program. She stayed with the program for six seasons and became known for her trademark catchphrase: "Hey, you guys." She and the rest of the cast won a Grammy Award in 1972 for the show's soundtrack.

Only a few years later, Moreno won a Tony Award for Best Featured Actress in a Play for her work in Broadway's The Ritz (1975). Accolades didn't stop there for Moreno. She went on to win two Emmy awards for guest appearances on The Muppet Show (1977) and The Rockford Files (1978). She is one of a handful of people to have received the four major entertainment honors — Emmy, Tony, Oscar and Grammy awards (also known as the EGOT).

Moreno again impressed critics with her turn as a no-nonsense nun on the cable television series Oz from 1997 to 2003. Today, she continues to act in feature films, make guest appearances on television, and sing and perform in theatrical productions.

She is also co-producing the 2021 remake of 'West Side Story.'

In 2019, she was honored with a Peabody Career Achievement Award, making her the first Latino to receive the award and only second person ever. With the award, she became a PEGOT, an honor only held by two other people — director Mike Nichols and performer Barbra Stresiand.

Once romantically linked to Brando, Moreno married Dr. Leonard Gordon in 1965. The couple has a daughter, Fernanda, and two grandchildren. Her husband died in 2010 at the age of 90.