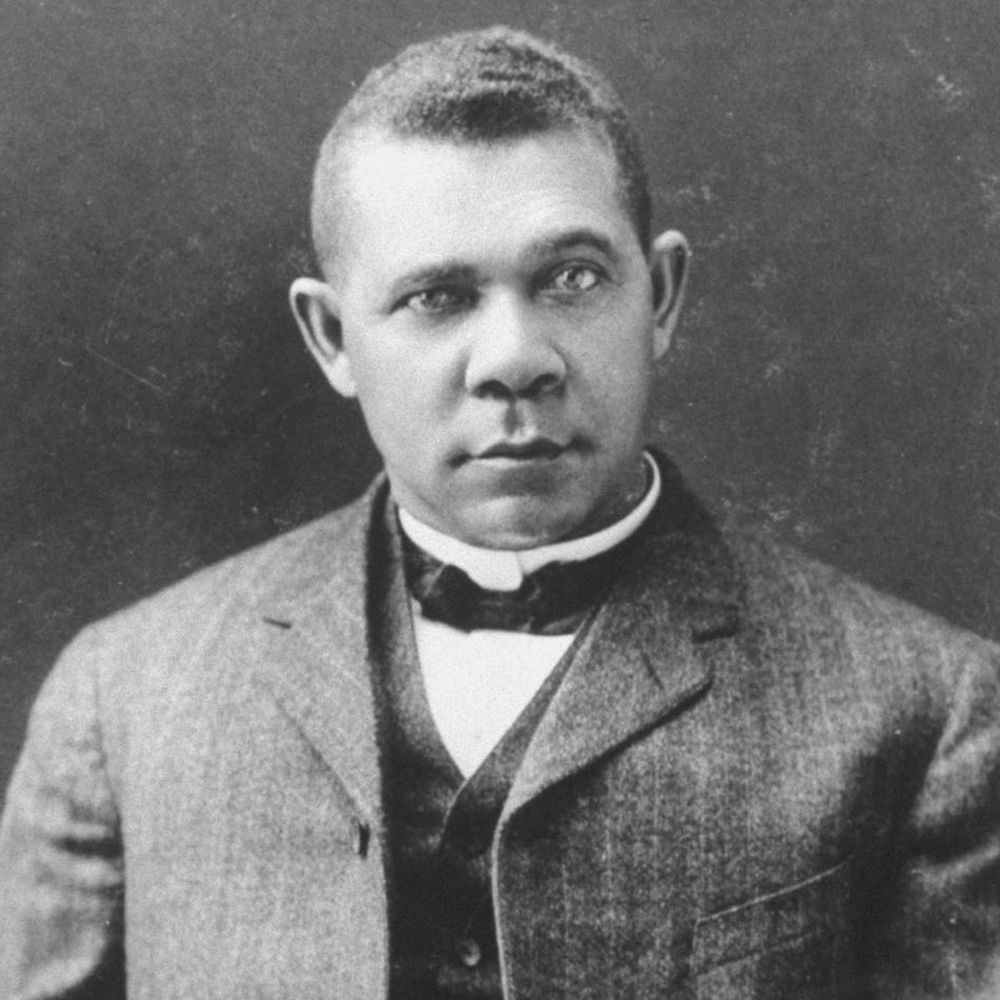 Who Was Booker T. Washington?

Born into slavery, Booker T. Washington put himself through school and became a teacher after the Civil War. In 1881, he founded the Tuskegee Normal and Industrial Institute in Alabama (now known as Tuskegee University), which grew immensely and focused on training African Americans in agricultural pursuits. A political adviser and writer, Washington clashed with intellectual W.E.B. Du Bois over the best avenues for racial uplift.

Born to an enslaved person on April 5, 1856, Washington's life had little promise early on. In Franklin County, Virginia, as in most states prior to the Civil War, the child of an enslaved person also became enslaved. Washington's mother, Jane, worked as a cook for plantation owner James Burroughs. His father was an unknown white man, most likely from a nearby plantation. Washington and his mother lived in a one-room log cabin with a large fireplace, which also served as the plantation’s kitchen.

At an early age, Washington went to work carrying sacks of grain to the plantation’s mill. Toting 100-pound sacks was hard work for a small boy, and he was beaten on occasion for not performing his duties satisfactorily. Washington's first exposure to education was from the outside of a schoolhouse near the plantation; looking inside, he saw children his age sitting at desks and reading books. He wanted to do what those children were doing, but he was enslaved, and it was illegal to teach enslaved people to read and write.

After the Civil War, Washington and his mother moved to Malden, West Virginia, where she married freedman Washington Ferguson. The family was very poor, and nine-year-old Washington went to work in the nearby salt furnaces with his stepfather instead of going to school. Washington's mother noticed his interest in learning and got him a book from which he learned the alphabet and how to read and write basic words. Because he was still working, he got up nearly every morning at 4 a.m. to practice and study. At about this time, Washington took the first name of his stepfather as his last name, Washington.

In 1866, Washington got a job as a houseboy for Viola Ruffner, the wife of coal mine owner Lewis Ruffner. Mrs. Ruffner was known for being very strict with her servants, especially boys. But she saw something in Washington — his maturity, intelligence and integrity — and soon warmed up to him. Over the two years he worked for her, she understood his desire for an education and allowed him to go to school for an hour a day during the winter months.

In 1872, Washington left home and walked 500 miles to Hampton Normal Agricultural Institute in Virginia. Along the way, he took odd jobs to support himself. He convinced administrators to let him attend the school and took a job as a janitor to help pay his tuition. The school's founder and headmaster, General Samuel C. Armstrong, soon discovered the hardworking Washington and offered him a scholarship, sponsored by a white man. Armstrong had been a commander of a Union African American regiment during the Civil War and was a strong supporter of providing newly freed enslaved people with a practical education. Armstrong became Washington's mentor, strengthening his values of hard work and strong moral character.

Washington graduated from Hampton in 1875 with high marks. For a time, he taught at his old grade school in Malden, Virginia, and attended Wayland Seminary in Washington, D.C. In 1879, he was chosen to speak at Hampton's graduation ceremonies, where afterward General Armstrong offered Washington a job teaching at Hampton. In 1881, the Alabama legislature approved $2,000 for a "colored" school, the Tuskegee Normal and Industrial Institute (now known as Tuskegee University). General Armstrong was asked to recommend a white man to run the school but instead recommended Washington. Classes were first held in an old church, while Washington traveled all over the countryside promoting the school and raising money. He reassured white people that nothing in the Tuskegee program would threaten white supremacy or pose any economic competition to white people.

Under Washington's leadership, Tuskegee became a leading school in the country. At his death, it had more than 100 well-equipped buildings, 1,500 students, a 200-member faculty teaching 38 trades and professions, and a nearly $2 million endowment. Washington put much of himself into the school's curriculum, stressing the virtues of patience, enterprise, and thrift. He taught that economic success for African Americans would take time, and that subordination to white people was a necessary evil until African Americans could prove they were worthy of full economic and political rights. He believed that if African Americans worked hard and obtained financial independence and cultural advancement, they would eventually win acceptance and respect from the white community.

Beliefs and the 'Atlanta Compromise'

In 1895, Washington publicly put forth his philosophy on race relations in a speech at the Cotton States and International Exposition in Atlanta, Georgia, known as the "Atlanta Compromise." In his speech, Washington stated that African Americans should accept disenfranchisement and social segregation as long as white people allow them economic progress, educational opportunity and justice in the courts.

This started a firestorm in parts of the African American community, especially in the North. Activists like W.E.B. Du Bois (who was working as a professor at Atlanta University at the time) deplored Washington's conciliatory philosophy and his belief that African Americans were only suited to vocational training. Du Bois criticized Washington for not demanding equality for African Americans, as granted by the 14th Amendment, and subsequently became an advocate for full and equal rights in every realm of a person's life.

Though Washington had done much to help advance many African Americans, there was some truth in the criticism. During Washington's rise as a national spokesperson for African Americans, they were systematically excluded from the vote and political participation through Black codes and Jim Crow laws as rigid patterns of segregation and discrimination became institutionalized throughout the South and much of the country.

In 1901, President Theodore Roosevelt invited Washington to the White House, making him the first African American to be so honored. But the fact that Roosevelt asked Washington to dine with him (inferring the two were equal) was unprecedented and controversial, causing an ferocious uproar among white people.

Both President Roosevelt and his successor, President William Howard Taft, used Washington as an adviser on racial matters, partly because he accepted racial subservience. His White House visit and the publication of his autobiography, Up from Slavery, brought him both acclaim and indignation from many Americans. While some African Americans looked upon Washington as a hero, others, like Du Bois, saw him as a traitor. Many Southern white people, including some prominent members of Congress, saw Washington's success as an affront and called for action to put African Americans "in their place."

Washington was a complex individual, who lived during a precarious time in advancing racial equality. On one hand, he was openly supportive of African Americans taking a "back seat" to white people, while on the other he secretly financed several court cases challenging segregation. By 1913, Washington had lost much of his influence. The newly inaugurated Wilson administration was cool to the idea of racial integration and African American equality.

Washington remained the head of Tuskegee Institute until his death on November 14, 1915, at the age of 59, of congestive heart failure.