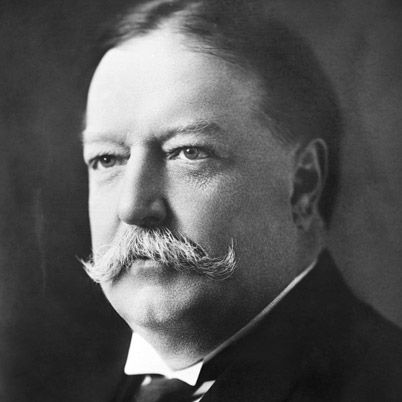 William Howard Taft was born in Cincinnati, Ohio, on September 15, 1857. From a prominent political family, he followed his forebears into law and was on track to be a career jurist, well on his way to his dream job of sitting on the Supreme Court, when he was sidetracked for a term as the 27th U.S. president by his wife and Theodore Roosevelt. Taft finally achieved his dream of being appointed chief justice of the U.S. Supreme Court in 1921, becoming the only person to have served both as a chief justice and president. Taft died in Washington, D.C., on March 8, 1930.

William Howard Taft, born on September 15, 1857, in Cincinnati, Ohio, was one of six children of Louisa Maria Torrey and Alphonso Taft. Many Taft ancestors, who could be traced back to the Massachusetts Bay Colony, had gone into law, including William's father, Alphonso Taft. Alphonso Taft had served under President Ulysses S. Grant as both secretary of war and attorney general, and as an ambassador under President Chester A. Arthur.

Taft went to private school and, like his father, attended Yale College. There, he joined the now-notorious secret society Skull and Bones, which his father co-founded in 1832. Taft graduated from Yale in 1878. Departing from tradition, he went on to attend the University of Cincinnati College of Law, and was admitted to the Ohio State Bar Association in 1880. Not long after, in 1886, wooed a schoolhood chum of his only sister, Frances: Helen "Nellie" Herron, whom Taft had met at a sledding party.

Taft did evince some political aspirations, joking that if he ever made it to Washington, it would be because his wife was secretary of the treasury, but he had always said his lifelong dream was to sit on the Supreme Court. Nellie, however, who had visited the Hayes White House with her family as a child, expressed a keen interest in living there.

As a young lawyer from a politically prominent family, Taft rose swiftly through the ranks, as county prosecutor, state judge, then at 32, in 1890, he became the youngest appointee as U.S. Solicitor General by President Benjamin Harrison, which moved the family to Washington for two years, to Nellie’s delight; there they met Theodore and Edith Roosevelt.

Several other posts followed back in Cincinnati, but a decade later, President William McKinley appointed Taft governor general of the Philippines. The portly judge then took his wife and three children to Southeast Asia, where they lived for four years, visiting China, Japan and the Vatican. Taft improved the Filipino economy and infrastructure, and expanded opportunities for governmental participation for Filipinos.

Back in Washington, D.C. by 1904, Taft became President Theodore Roosevelt's secretary of war. Two years later, when Roosevelt offered him the choice to serve as either president or chief justice, Taft naturally chose his dream job. However, following a private meeting between Nellie and Roosevelt, Taft was swayed into running for the U.S. presidency instead.

Taft had an easy victory in the November 1908 election, sliding in on the popularity and endorsement of predecessor Theodore Roosevelt. He assumed the office of president on March 4, 1909, but the rest of his single-term presidency was not as easy.

A stickler for the law, Taft was less inclined to push the envelope of presidential power as Roosevelt had done; he was more of a jovial academic than a savvy party politician, and did not easily curry favor with possible political allies.

Taft created a "policy of harmony" with Congress, which helped him move though much of his legislative agenda, but misunderstandings about his stance on big business, and a murky approach to tariff proposals on goods entering the United States—resulting in the Payne-Aldrich Act—frustrated both supporters and opponents of the policy. It also further fractured the rift within the Republican Party between conservatives and progressives. In the midterm elections, he lost the Republican majority in Congress.

Taft did impose a corporate income tax, however, which raised national revenue more than $13 million. Under the Taft Administration, the terms "shirt sleeve diplomacy," "open door policy" and dollar diplomacy" were created in regard to negotiations with China and Latin America—the latter involving guaranteed loans to stimulate growth, trade and stability. Taft's wife, Nellie, did her part for foreign relations as well, initiating the planting of Japan's gift of thousands of cherry trees that still grace the avenues and banks of the Tidal Basin, changing the face of Washington, D.C. each spring.

Taft left office on March 4, 1913, defeated by Democrat Woodrow Wilson. He had also been challenged by his predecessor, Theodore Roosevelt, who initiated a third party, Bull Moose, because he felt Taft had broken their covenant on progressive principles. Roosevelt came in second.

While in college, Taft earned the nickname "Big Lub" due to his size -- he was almost 6 feet tall and weighed more than 240 pounds at that time -- but he managed it well. Never a drinker during his White House years but indulging in a copious appetite, his size increased to morbid obesity. He was often the butt of jokes for reported incidents of belching and flatulence, as well as suffering from sleep deprivation due to apnea. Urban legend had it that the 350-pound Taft got stuck in a bathtub while serving as president, but all historical accounts show the story is most likely false.

Less than a year after leaving the presidency, Taft dropped to about 270, which encouraged him to take a trip to Alaska. However, the weight seemed to take a toll on his joints; Taft used a cane made of 250,000-year-old petrified wood -- a gift from geology professor W.S. Foster -- from 1920 onward.

Taft became a law professor at Yale University, but took time after the outbreak of WWI to co-found the League for Enforced Peace the League to Enforce Peace -- a precursor to the League of Nations -- with Alexander Graham Bell and other prominent Americans. In the summer of 1921, Taft finally achieved his long-desired position: He was appointed chief justice of the Supreme Court by President Warren G. Harding, becoming the only president to hold a seat on the Supreme Court.

Taft's presidency is often thought of as lackluster, but following a flashy personality like Theodore Roosevelt is no easy feat. Few are aware that Taft, the 27th U.S. president, actually busted more trusts over his four years in office than Roosevelt did during his eight-year administration (Taft and Roosevelt eventually reconciled not long before Roosevelt's death in 1919). Of his presidential term, Taft once wrote, "I don't remember that I ever was president."