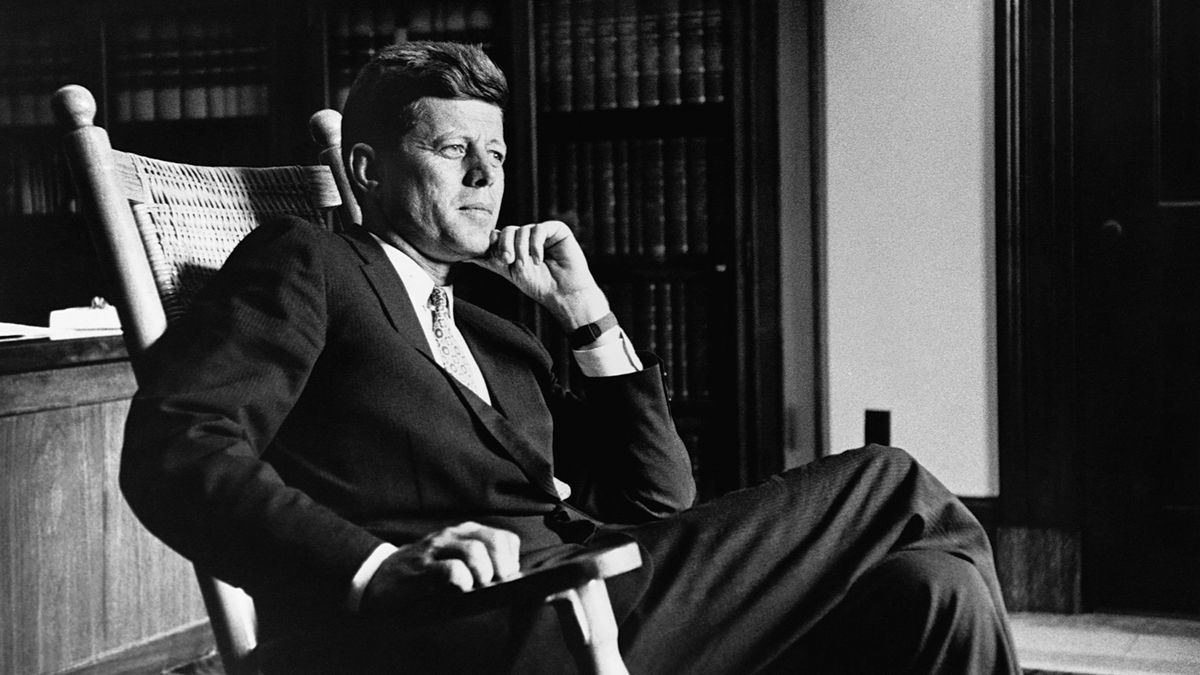 With their wealth and power, the Kennedys have been touted as the closest thing to royalty in America. Having left their homeland of Ireland in the 1840s to escape the potato famine, the Kennedys — starting with Boston-born Patrick Joseph "P.J." Kennedy (1858-1929) — built their future from the ground up and became heavily involved in the Democratic Party in Boston.

Two generations later and beyond, the Kennedy name would expand its political reach to both the national and world stage, producing a U.S. president, a U.S. attorney general, four members of the U.S. House and Senate and a number of publicly appointed and elected government officials. What the Kennedys didn't anticipate, however, was that intertwined with their unimaginable ascent to power were a series of unimaginable tragedies.

While not nearly a comprehensive list, here are a dozen notable Kennedys who've helped shape the American political landscape and contributed to their family's historical legacy of public service. 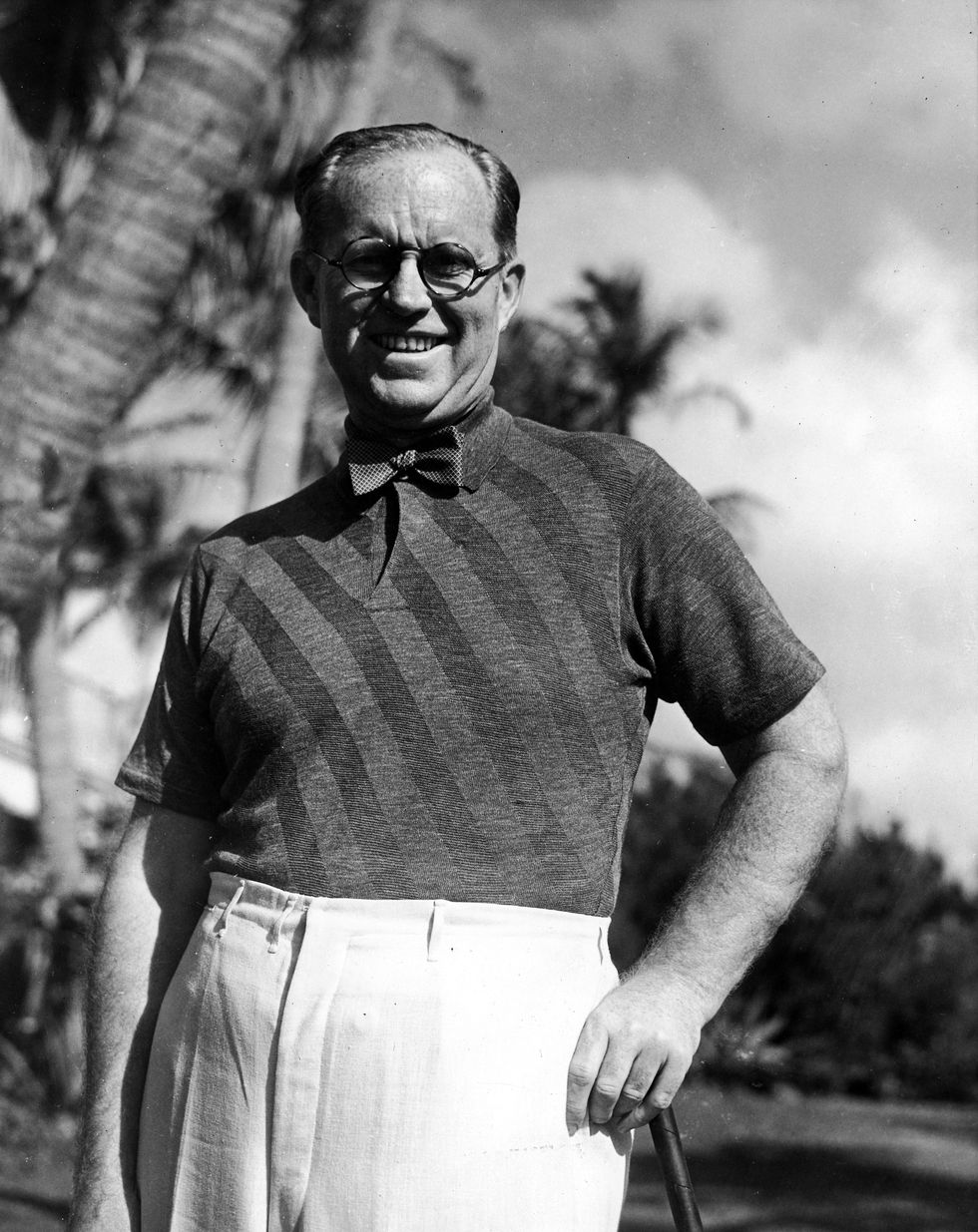 The patriarch of the Kennedy political dynasty, American businessman (1888-1969) was a prominent Irish-Catholic Democrat whose political ambitions were ultimately lived out through his sons John F. Kennedy, Robert F. Kennedy and Ted Kennedy.

Outside of being a wealthy investor in real estate, alcohol and entertainment, Kennedy briefly served as a U.S. Securities and Exchange Commission chairman and an American ambassador to the U.K. Although he left a controversial legacy behind (he was known to have anti-Semitic and pro-Nazi leanings), he, along with his wife Rose and his children, were a testament to public service. Out of his nine children, he would outlive four. 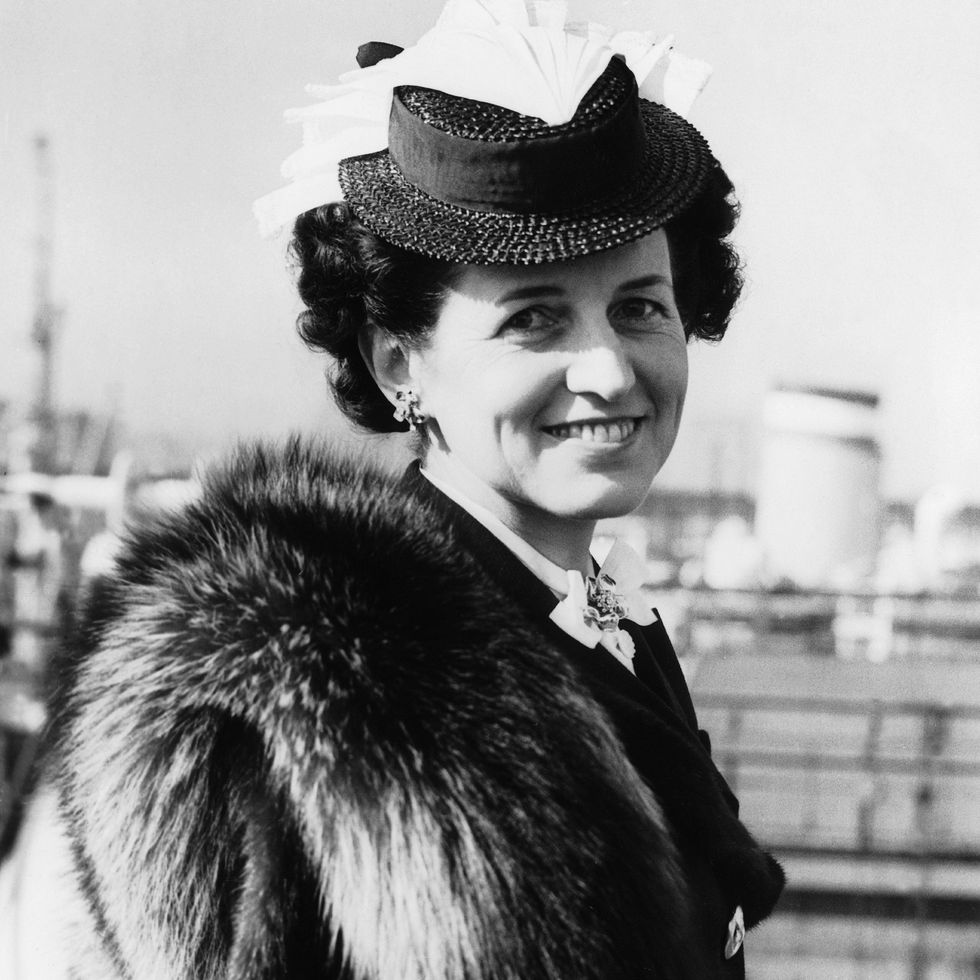 A staunch Catholic, matriarch Rose F. Kennedy (1890-1995), grew up in a wealthy and political Irish-American household (her father, John F. Fitzgerald was the mayor of Boston). After a lengthy courtship with Joseph Kennedy Sr., which was partially due to her father's disdain for him, Rose married Kennedy in 1914 and the couple went on to have nine children.

Before Rose died at the age of 104, she was honored with the rank of Papal countess by Pope Pius XII for her exemplary religious life and devotion to Catholicism. 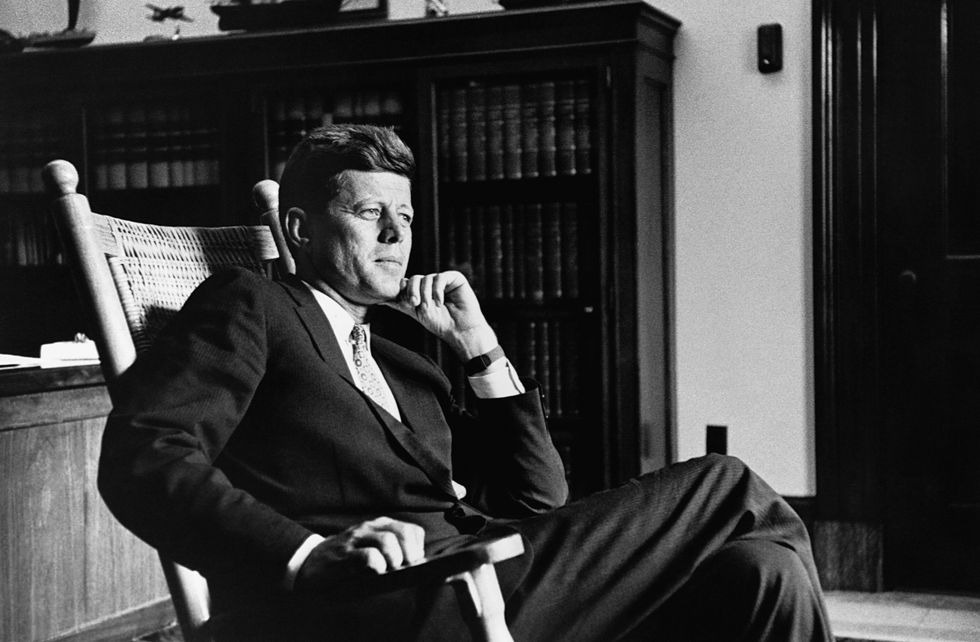 After the tragic death of older brother Joseph P. Kennedy Jr., John F. Kennedy (1917-1963) took up the political mantle for the next generation of

Kennedys. A Harvard graduate, Kennedy later became a decorated Naval officer in World War II. After serving as a House member and Senator of Massachusetts, he reached the highest office of the land in 1961. At 43 Kennedy became America's youngest elected president.

Kennedy launched his administration at the bleakest point of the Cold War, later authorizing the failed Bay of Pigs invasion and taking the country through the Cuban Missile Crisis, which almost brought the U.S. and the Soviet Union to nuclear war.

After Kennedy's assassination in 1963 by Lee Harvey Oswald, Vice President Lyndon B. Johnson took over the administration and brought forth many of Kennedy's civil rights and tax proposals. 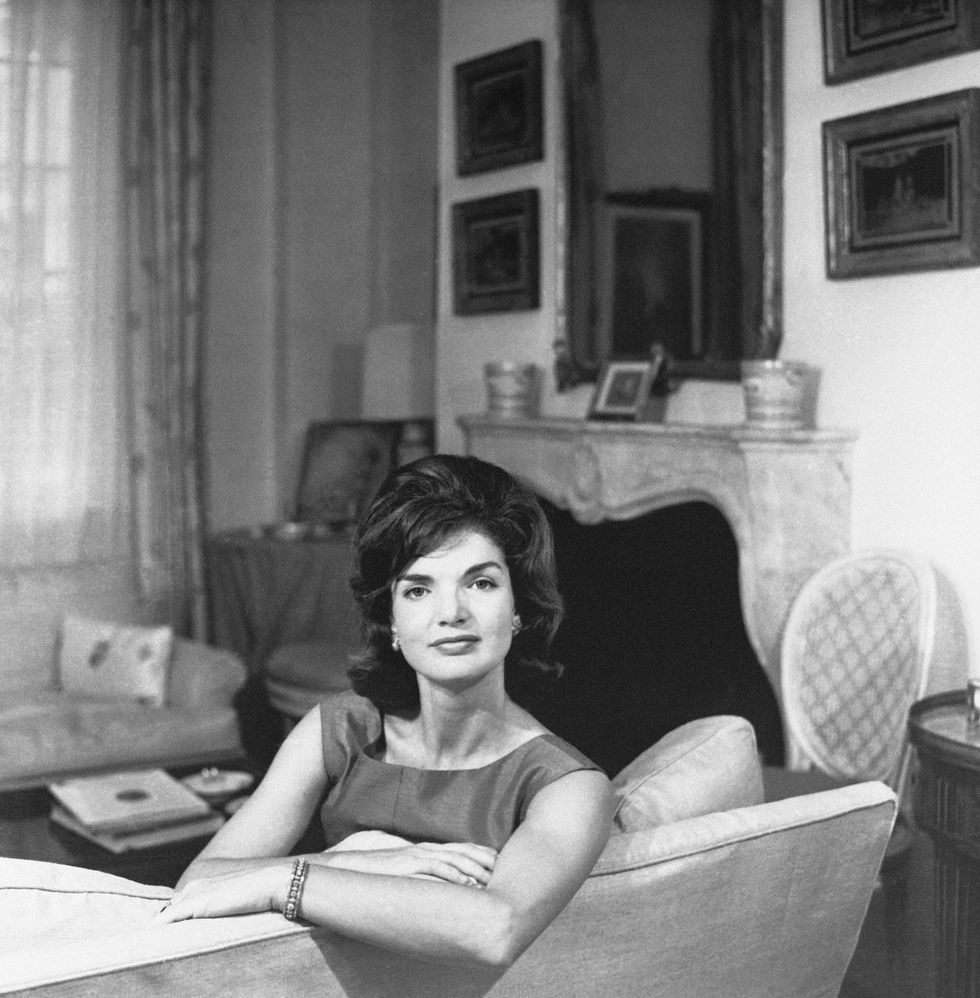 As wife to John F. Kennedy and the youngest first lady of the United States, Jacqueline Kennedy Onassis (1929-1994) became an international fashion icon and transformed the White House through her various restoration projects. A graduate of George Washington University, Onassis first met the then-Congressman Kennedy in 1952 and married him the following year. She and Kennedy had a total of four children, two of whom survived.

When JFK was assassinated in Dallas, Onassis' blood-stained pink dress and pillbox hat became a symbol of the tragedy. Known for her love for the arts and culture, Onassis helped shaped the "Camelot Era" mythology. She later married Greek shipping tycoon Aristotle Onassis (to much controversy) and became a book editor in New York City. 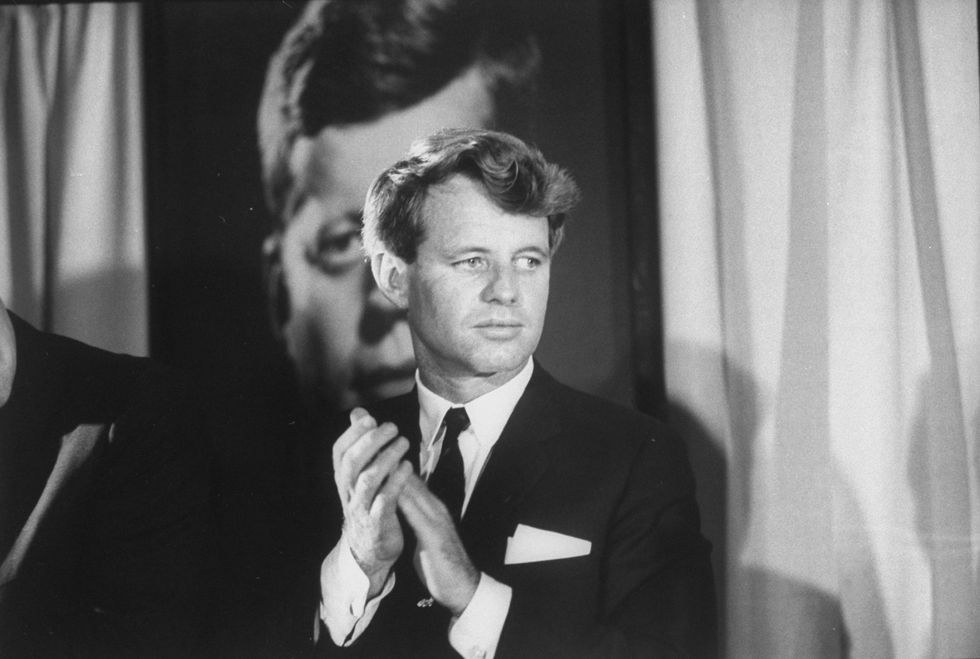 As the seventh child of Joseph P. Kennedy and Rose Kennedy, Robert F. Kennedy went on to follow in his big brother JFK's footsteps, serving in the Navy and graduating from Harvard. After receiving his law degree from the University of Virginia, Kennedy worked at the Justice Department but soon after left his post to help his brother win a Senate seat in 1952.

After JFK's assassination, Kennedy became a U.S. Senator in 1964 and ran as a presidential candidate of the Democratic Party in 1968. While campaigning in California that year, Kennedy was gunned down by a young Palestinian man, Sirhan Sirhan, who claimed he killed the senator for being a supporter of Israel. 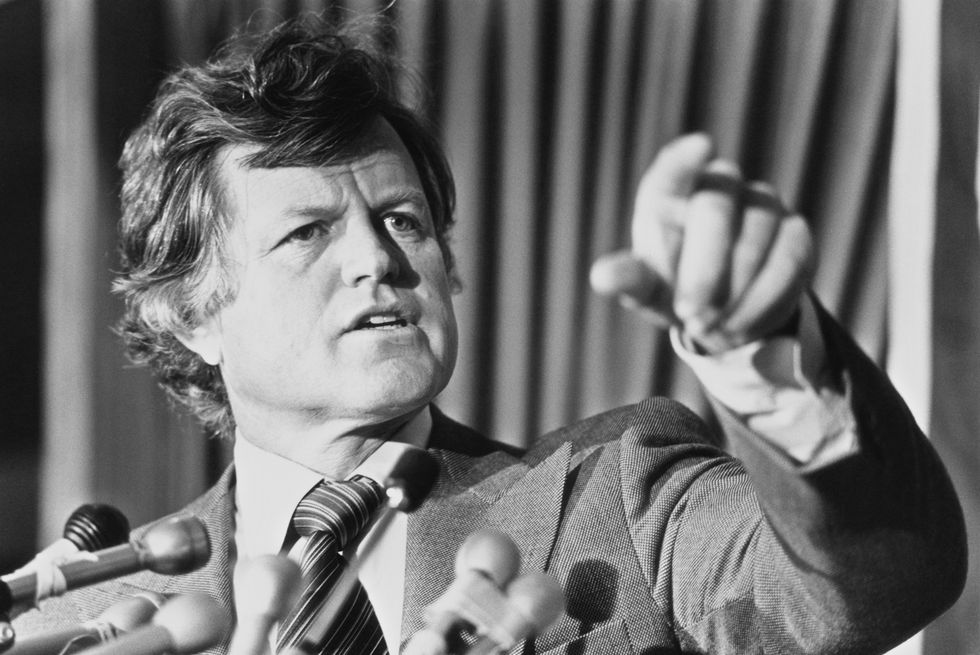 As the ninth and last child born to Joseph P. Kennedy and Rose Kennedy, Edward "Ted" Kennedy (1932-2009) would end up having the largest influence on American politics than any of his siblings before him.

With the same Ivy League pedigree as his brothers before him, Kennedy prepared himself to live up to his family's name and even earned his way into the vacant Senate seat that older brother John left behind when he was elected president. (Kennedy would be elected eight more times to the Senate by the people of Massachusetts.)

But Kennedy's political career was in deep peril after the infamous Chappaquiddick incident in 1969, resulting in the accidental drowning death of Mary Jo Kopechne. After a failed attempt to win the presidential nomination in 1980, Kennedy continued his life of public service and became known as "The Lion of the Senate," emerging as a symbol of American liberalism and one of the longest-serving senators in American history. His legislative record will be remembered for its advocacy for social and economic justice and towards the end of his life, universal health care. 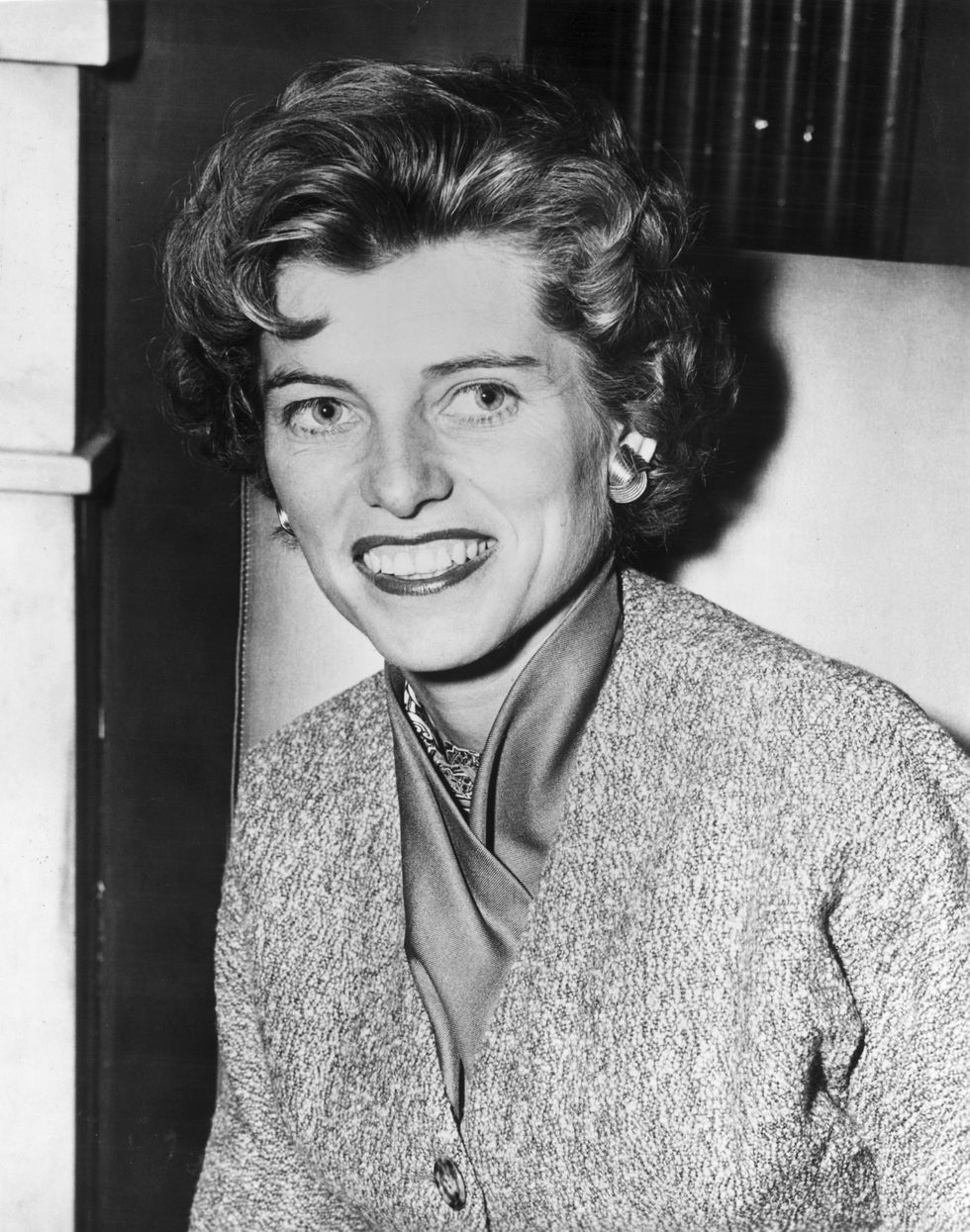 As the fifth child born to Joseph P. and Rose Kennedy, Eunice Kennedy Shriver (1921-2009) was deeply affected by her sister, Rosemary, who was sent away to a psychiatric institution after undergoing a disastrous lobotomy for an intellectual disability.

After graduating from Stanford University with a degree in sociology, Shriver worked at the U.S. State Department and the U.S. Department of Justice and later moved to Chicago to focus on social work. In 1968 she established the Special Olympics and later that year, hosted the First International Special Olympics Summer Games in Chicago, which provided children with physical and intellectual disabilities an opportunity to compete in athletics on a larger, organized scale. In 1984 she was honored with the Presidential Medal of Freedom for her work.

From 1953 until her death in 2009, Eunice was married to Sergeant Shriver, a former U.S. Ambassador to France and U.S. Vice Presidential candidate. The couple went on to have five children. 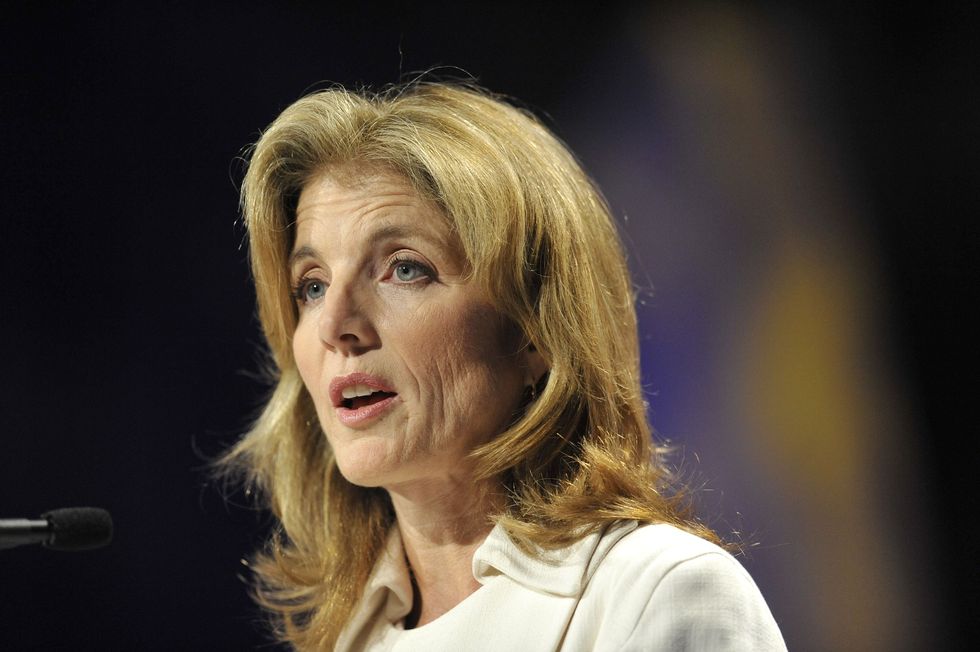 Daughter of John F. Kennedy and Jackie Kennedy Onassis, Caroline Kennedy (b. 1957) has lived her life under the radar, despite the scrutiny and fame surrounding her family. She attended Harvard as an undergraduate like her father and went on to graduate from Columbia Law School. In 1986 she married designer Edwin Schlossberg, whom she met while working at the Metropolitan Museum of Art and together they have three children.

Appointed by President Barack Obama, Kennedy served as U.S. ambassador to Japan from 2013 to 2017. 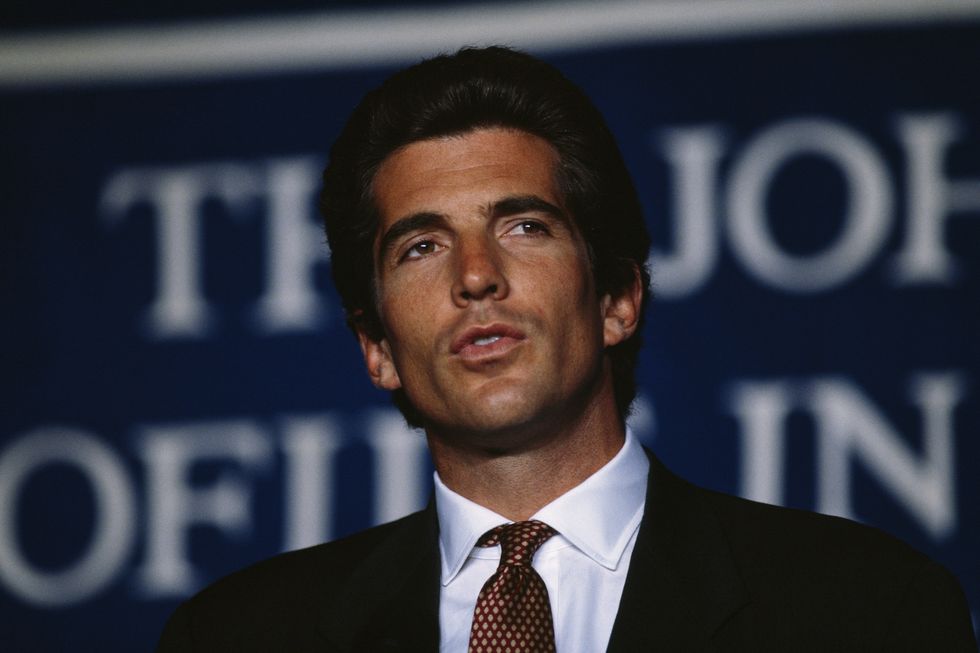 From being the three-year-old toddler famously saluting his fallen father's casket in 1963 to transforming into one of the most eligible bachelors in New York City, John F. Kennedy Jr. (1960-1999) couldn't manage to steer clear of the limelight like his older sister Caroline.

While the Kennedy name had produced many Harvard alums, JFK Jr. paved his own way and attended Brown University for his undergraduate studies. After earning his law degree from New York University School of Law, he briefly served as a Manhattan assistant district attorney and dabbled in acting before ultimately becoming co-founder of George, a magazine fusing the world of politics and entertainment, in 1995.

After marrying fashion publicist Carolyn Bessette in 1996, JFK Jr.'s life was cut short three years later when he accidentally flew his plane into the Atlantic, killing himself, Carolyn, and her older sister Lauren. 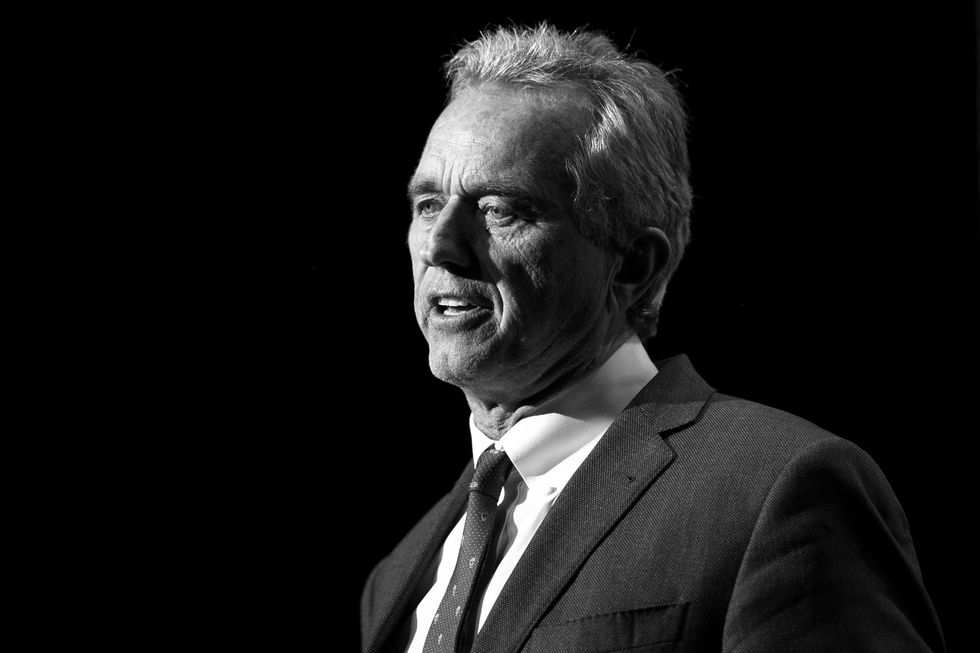 As the first-born son of Robert and Ethel Kennedy, Robert F. Kennedy Jr. (b. 1954) was nine years old when his uncle JFK was assassinated and 14 when he lost his own father.

In honor of RFK Sr., Kennedy attended Harvard and got his law degree at the University of Virginia. He also earned his Masters of Law degree at Pace University, where he would later teach as a professor of environmental law.

As an environmental lawyer and activist, Kennedy worked at the Natural Resources Defense Council (NRDC) as a senior attorney (1986-2017) and the Hudson, New York waterways nonprofit called Riverkeeper as its chief prosecuting attorney (1984-2017). He has also authored multiple books and published essays regarding environmental issues.

Also known for his anti-vaccine stance, Kennedy has come under fire from both the public and his family in recent years. 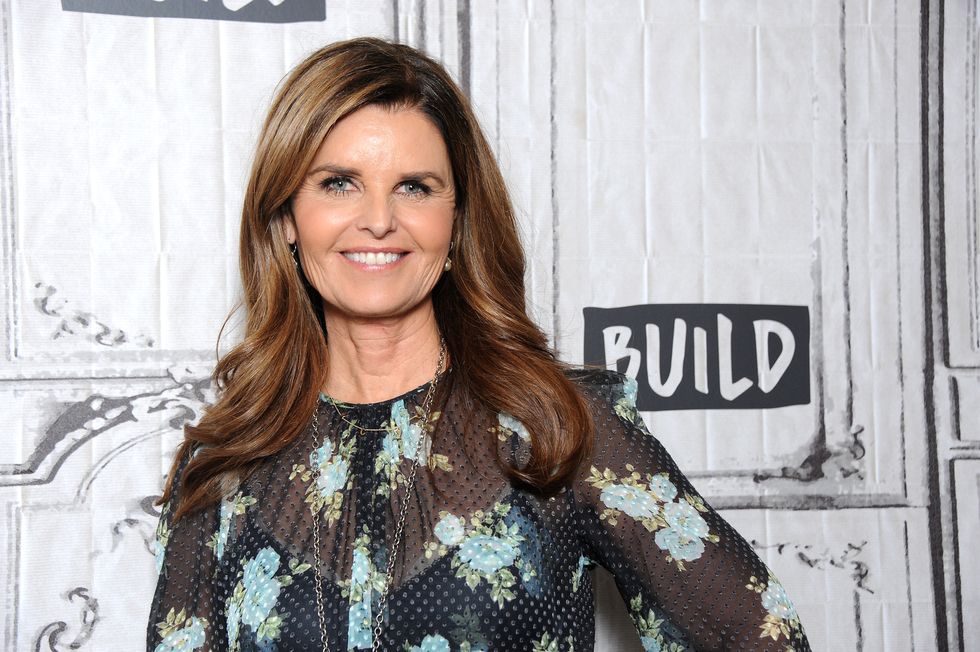 The second eldest child and first daughter to Sergeant and Eunice Kennedy Shriver, Maria Shriver (b. 1955) has built a successful career as an award-winning broadcast journalist, philanthropist and children's book author.

After graduating from Georgetown University in 1977, Shriver embarked on her broadcast career — working at both CBS and NBC. She later met and married actor Arnold Schwarzeneggar who, like his famous in-laws, had political ambitions of his own. After Schwarzeneggar won the governorship of California starting in 2003, Shriver served as its First Lady (2003-2011).

The couple divorced in 2011. They have four children together. 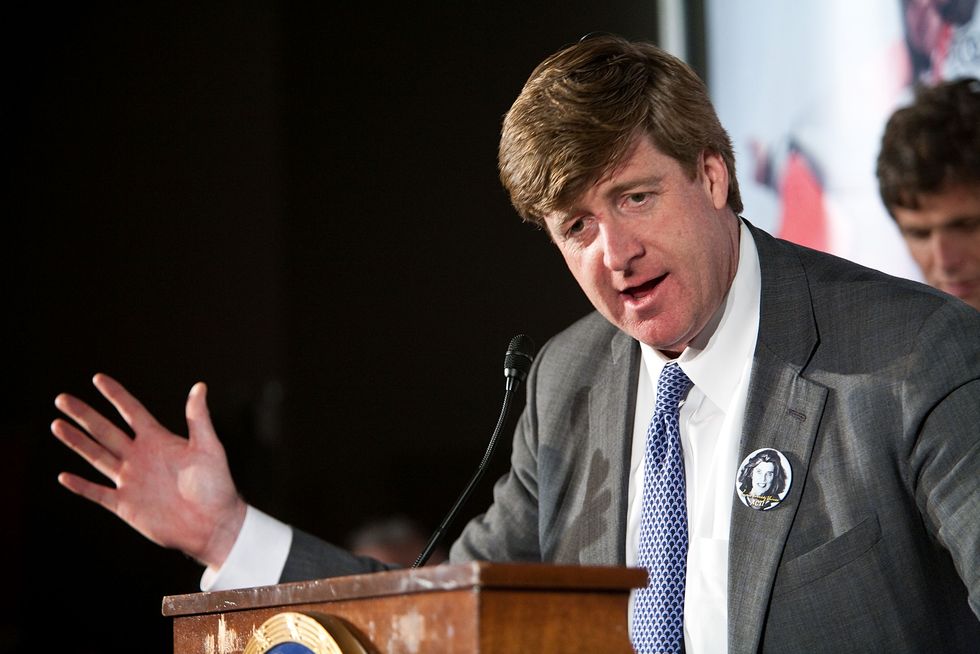 As the youngest child of Ted and Joan Bennett Kennedy, Patrick J. Kennedy (b. 1967) hadn't even completed his undergraduate degree at Providence College in Rhode Island when he beat a longstanding incumbent for a seat in the state's House of Representatives in 1988. At 21 he became the youngest Kennedy elected to office.

In 1994 he took to the national stage as a House Representative for Rhode Island's 1st Congressional District and continued to serve in seven additional election cycles, finishing his term in 2011. An advocate for mental health, Kennedy — who has publicly discussed his own struggles with addiction and bipolar disorder — has founded and continues to work with various organizations to bring attention to drug addiction and promoting research for brain diseases.