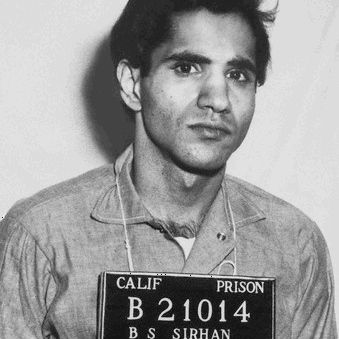 Sirhan Bishara Sirhan was born in Jerusalem, Mandatory Palestine, on March 19, 1944. Sirhan moved to the United States at the age of 12, graduating from college in California. He later objected to Senator Robert Kennedy's support for Israel in the 1967 Six-Day War. On June 5, 1968, Sirhan shot and killed Kennedy during a presidential primaries appearance, and was convicted of the crime the following year. Sirhan initially received the death penalty. His sentence was commuted to life imprisonment after a change in state law.

Sirhan Bishara Sirhan was born on March 19, 1944 in Jerusalem. He was raised as a Palestinian Christian and was also born with Jordanian citizenship. Sirhan moved to the United States at the age of 12—living first in New York and then in California, where he eventually attended Pasadena City College.

A fervent Christian, Sirhan explored several denominations as an adult. He identified as a Baptist and Seventh Day Adventist before joining the occult Rosicrucians. He also worked at the stables for a race track in Arcadia.

On June 5, 1968, Sirhan shot and killed Senator Robert Kennedy, who was campaigning for the Democratic nomination for president and had just won the California primary. Kennedy was the younger brother of President John F. Kennedy, who'd been assassinated in 1963. Robert Kennedy had served as attorney general in his brother’s cabinet and was the Democratic front-runner at the time of his death. Sirhan shot Kennedy four times, leading to his death 26 hours later. Several other victims sustained gunshot wounds from which they recovered.

As corroborated by an Inside Edition TV interview decades later, Sirhan greatly resented Kennedy’s support of the Six-Day War intervention in Israel the previous year. The prosecuting attorneys in the subsequent trial had also pieced together these motives based on Sirhan’s personal journals, seized from his home, and from his taped confession.

Sirhan was captured and disarmed at the scene of the crime. He confessed the murder to police a few days later, but then pleaded not guilty. Sirhan was tried at length, and a judge rejected his request to change his plea to guilty after papers were found in his home with highly implicating language. The defendant behaved strangely throughout the trial, potentially bolstering counsel’s argument of diminished capacity at the time of the murder. The argument was not enough to sway the jury: Sirhan was convicted of premeditated murder on April 17, 1969, and sentenced to death. His sentence was commuted to life imprisonment three years later due to the California Supreme Court ruling in People v. Anderson, outlawing the death penalty in the state.

Ongoing requests for parole have been denied. (As of 2011, there have been 14 parole requests.) Sirhan’s counsel has argued that their client has no memory of the murder due to brainwashing by the Rosicrucians or a political organization. There has also been talk of a second gunman, with a witness at the scene, Nina Rhodes-Hughes, stating there was an additional shooter. Having made previous statements that he acted alone and was under the influence of alcohol, Sirhan has also expressed remorse over his actions and claimed to have no memory of confessing to the murder of Robert Kennedy, either in police custody or during his trial.