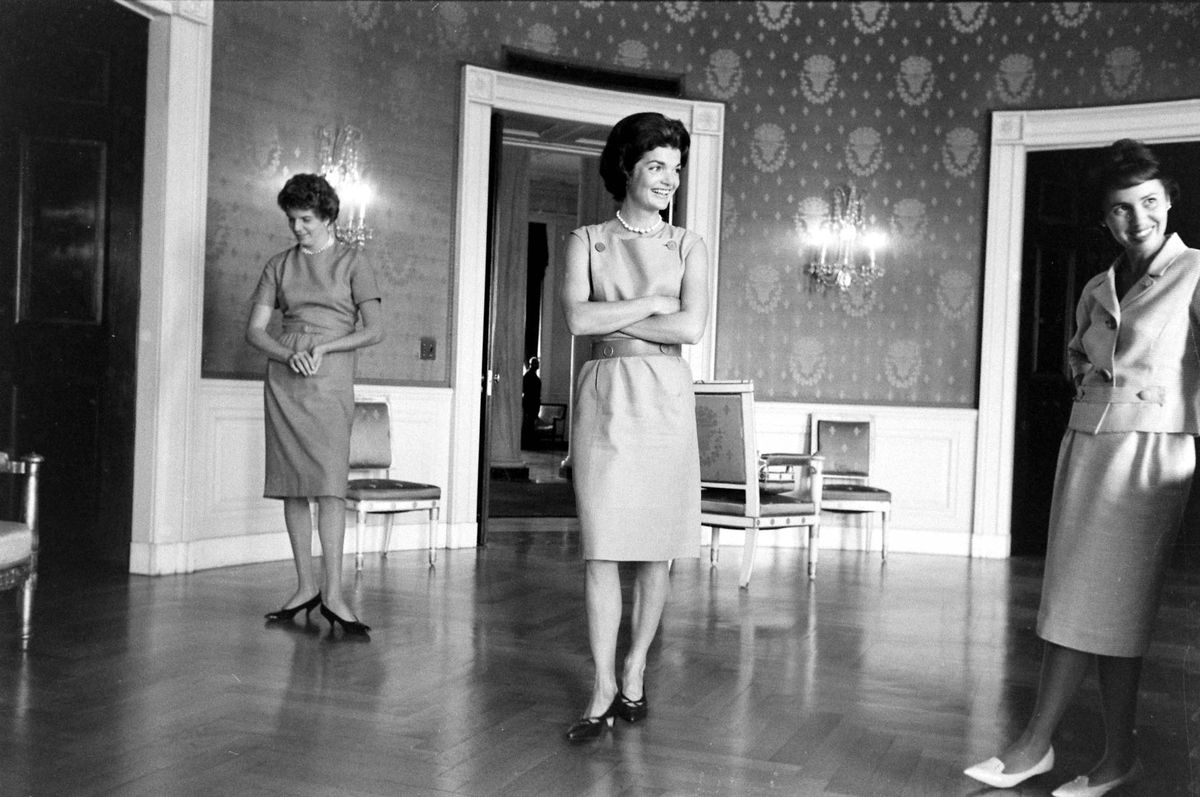 Jacqueline Kennedy once said, "Everything in the White House must have a reason for being there. It would be sacrilege merely to 'redecorate' it — a word I hate. It must be restored, and that has nothing to do with decoration. That is a question of scholarship." During her time as first lady, Kennedy undertook a restoration of the White House that transformed it into a showcase for American presidential history. She shared her work with the country via a televised tour in 1962, which was so well-received that she was given an honorary Emmy.

Kennedy initially didn't like living at the White House

Even before she moved into the White House for the duration of husband John F. Kennedy's presidency, Kennedy wasn't impressed by the presidential abode. She felt it "looked like it's been furnished by discount stores," and didn't appreciate features such as having water fountains on various walls. The décor also reflected predecessor Mamie Eisenhower's fondness for the color pink. All in all, Kennedy considered the White House "that dreary Maison Blanche."

Some shortfalls in the White House's appearance were understandable, as not every administration had treated the executive mansion with care. During Harry Truman's presidency, the need for repairs had been so overwhelming that much of the interior structure had to be gutted and rebuilt with steel, which depleted funds to the point that Truman opted for department store furnishings on the ground floor. But instead of accepting the presidential house as it was, Kennedy decided to improve it. However, her plans "to make the White House the first house in the land" weren't immediately embraced by the president's political circle. As the White House was a temporary residence for each president, JFK and others worried that substantial changes could attract criticism.

Adviser Clark Clifford helped Kennedy find a solution: the Fine Arts Committee for the White House. The committee was formed in February 1961 with a goal of locating "authentic furniture of the date of the building of the White House and the raising of funds to purchase this furniture as gifts for the White House." Not only was seeking "authentic furniture" deemed acceptable, being able to get financing from outside sources would avert complaints about misspent taxpayer resources (refurbishment of the Kennedys' private quarters had already used up the $50,000 allocated by Congress for White House alterations). 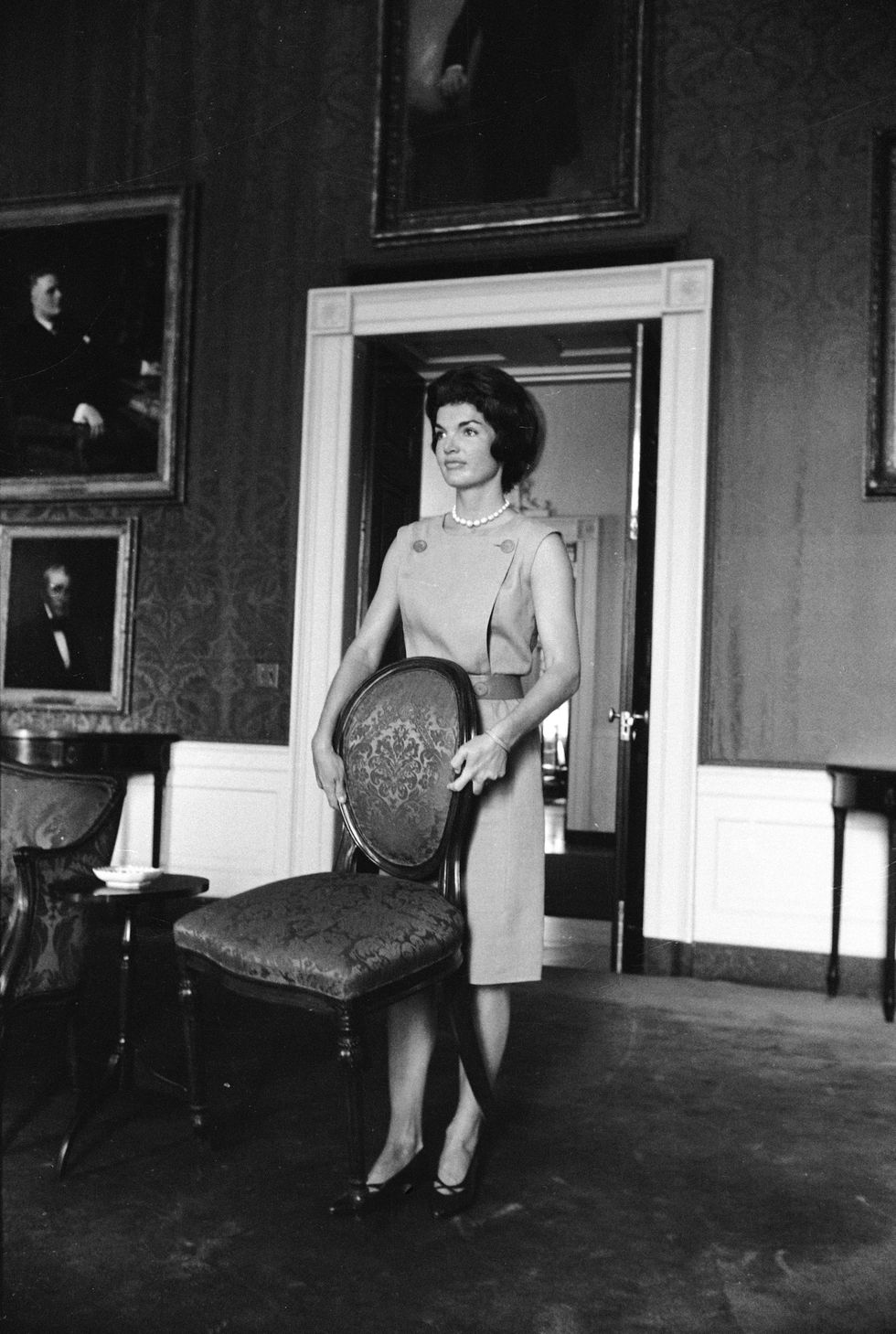 Kennedy gathered a team of professionals to help

Kennedy managed to get her ideal chair for the Fine Arts Committee: Henry Francis du Pont. He was wealthy, well-connected and highly respected for his expertise in Americana, and Kennedy felt it was a "red-letter day" when du Pont agreed to take on the chairmanship. His status helped convince people to contribute to the effort.

Lorraine Waxman Pearce started in March 1961 as the first White House curator. Mrs. Henry Parish II, better known as Sister Parrish, became the official interior designer for the project. She had valuable social connections and had previously worked with Kennedy (including on the $50,000 refurbishment of the private White House quarters).

However, Kennedy preferred working with French designer Stéphane Boudin instead of Parish. Among Boudin's past projects was the restoration of part of Versailles. But Kennedy had to keep his role hidden — using French talent on the home of the U.S. president wouldn't have been a popular choice.

READ MORE: Why Jacqueline Kennedy Didn't Take Off Her Pink Suit After JFK Was Assassinated

Interest and support from the public helped restore the White House

Kennedy originally felt the restoration should focus on the White House's early style (it was completed in 1802, then rebuilt in 1817 after being burned to the ground by British troops during the War of 1812). Yet her goals soon expanded to have the restoration "reflect the whole history of the presidency."

Fortunately, coverage of Kennedy's restoration efforts resulted in numerous people reaching out to donate items with White House connections. And Kennedy sought out other items of interest, as when she asked Walter Annenberg, owner of a valuable portrait of Benjamin Franklin, "Do you think that a great Philadelphia citizen would give the White House a portrait of another great Philadelphia citizen?" In the end, Annenberg agreed to donate the portrait, which he'd purchased for $250,000.

In September 1961, Congress passed a law making the White House a museum. This meant any donated antiques and art became the property of the White House and was placed in the care of the Smithsonian when not in use. Donors, therefore, knew that future presidents wouldn't be taking any pieces of history with them when their time in the White House came to a close. The legislation also reassured Kennedy that her restoration work couldn't be completely undone by a future first family.

Kennedy dug into details for the White House restoration, studying books and periodicals to learn about White House history. Thanks to her research, four Cézanne paintings in the National Gallery of Art were moved to the White House, the originally intended destination.

Kennedy was also willing to get her hands dirty. She searched everywhere, from storage rooms to bathrooms, to unearth valuable items already in the White House. These efforts aided in the discovery of light rugs ordered by Theodore Roosevelt and French flatware from James Monroe's era. Century-old busts were found in a downstairs men's room. And she moved aside electric gear in a broadcast room to uncover the Resolute desk. The desk, made from timbers from the HMS Resolute, had been a gift from Queen Victoria to President Rutherford B. Hayes. Kennedy then placed the desk in the Oval Office, where it has remained for many presidential administrations.

In the fall of 1961, the White House Historical Association was established. One of its endeavors, a White House guidebook, was Kennedy's brainchild. When she'd toured the White House as a child, she'd been disappointed that no guidebook had been available, so she changed that by overseeing the creation of The White House: An Historic Guide.

A Television Tour of the White House with Mrs. John F. Kennedy"&nbsp;

News about Kennedy's White House restoration began to spread as soon as the project began. A Life magazine article in its September 1, 1961, issue delved further into her work. But it was via TV that Kennedy was able to give the first televised tour of the White House, which allowed her to share restoration details with a large swath of the American public.

On February 14, 1962, A Television Tour of the White House with Mrs. John F. Kennedy was broadcast on CBS and NBC. The show, seen by 56 million viewers, displayed Kennedy's depth of knowledge about numerous pieces in the White House (while permitting her to thank many important donors). President Kennedy also made a brief on-camera appearance.

The program went on to air around the world, even in countries on the opposite side of the United States in the Cold War. Future First Lady Barbara Bush appreciated the broadcast enough to send Kennedy a fan letter. And the Academy of Television Arts and Sciences presented Kennedy with an honorary Emmy Award for her work.

Despite some backlash, Kennedy's White House restoration lives on

Overall, the White House restoration was a public triumph, though the first lady was embarrassed by a Washington Post article from September 1962 that outed Boudin's involvement and revealed that a desk mentioned during the TV tour was a fake. The restoration was nearly finished by November 22, 1963, when President Kennedy was assassinated and the first lady's stay in the White House came to an end.

Even though her work was incomplete, Kennedy had already done enough to create a lasting legacy. Subsequent presidents and their families have made changes to the White House, but through it all, the residence has retained a connection to the past that Kennedy helped forge. She lived up to what she'd earlier told Life magazine: "Like any President's wife I'm here for only a brief time. And before everything slips away, before every link with the past is gone, I want to do this."