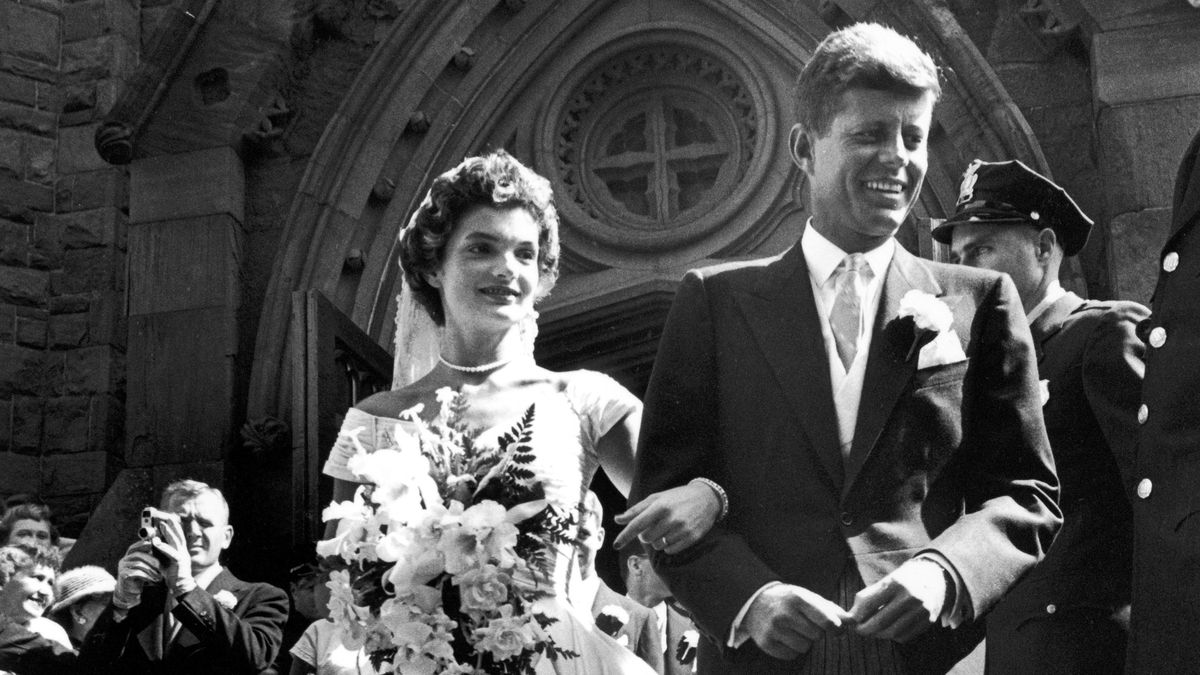 John F. Kennedy's engagement to Jacqueline Bouvier was announced in June 1953. Their wedding, held on September 12, 1953, became a huge event. It wasn't every day that one of the country's most eligible bachelors — a Kennedy, nonetheless — says "I do." And by becoming national news, the wedding also helped create a path to the White House for John and Jackie a few years later.

As Jacqueline — better known as Jackie — prepared to marry John, she and mother Janet Auchincloss envisioned an intimate ceremony. "I can tell you that I'm planning a small wedding," Jackie told the Boston Globe. But Joseph Kennedy, her fiancé's father, had other plans. His son was then a newly minted U.S. Senator, but Joe saw the possibility of an even brighter political future ahead and wasn't willing to let the good publicity a wedding offered pass him by.

Though Jackie's mother was a formidable presence, she was outmatched by Joe's insistence that their children's wedding needed to be a grand spectacle (his offer to foot the bill for the affair also helped overcome objections). The wedding would take place in Newport, Rhode Island, the summer home of Jackie's mother and stepfather Hugh Auchincloss Jr., but it was the Kennedys who put together an extensive guest list that contained powerful people from Hollywood, Washington, D.C. and Boston. Janet vented to a friend, "The wedding will be just awful — quite dreadful. There will be one hundred Irish politicians!"

Jackie and John also needed to personally ready themselves prior to the wedding. They had genuine feelings for each other, but the prospective groom had continued to see other women during their courtship, and being engaged didn't change him. Jackie had been warned about her husband-to-be's philandering, while John wasn't all that sure about married life ("I never saw a man more depressed than on the day he told me he was getting married," a friend later said). Of course, both obviously decided to go through with the wedding.

Jackie was pressured by John's father to wear a traditional gown

Jackie preferred French fashions and simpler designs, which better suited her figure. But Joe was worried that such a look might alienate potential voters. And he exercised so much control over wedding plans that his choice carried the day. In lieu of a more modern design, Jackie reluctantly agreed to wear a traditional gown.

Ann Lowe, an African American designer whose talent was appreciated throughout the upper echelons of society, was selected to make Jackie's gown. Unfortunately, a burst pipe destroyed the wedding dress and several bridal attendant pieces just 10 days before the ceremony, forcing Lowe and her team to work nonstop to recreate the damaged dresses. Thanks to Lowe's efforts, Jackie ended up with an impressive ivory silk taffeta gown made out of 50 yards of fabric that featured a big skirt, rows of ruffles and embroidered flowers.

Jackie likely wasn't aware of the trouble the designer had gone to, or that Lowe had initially been refused entry at the front of the house when she'd arrived with the dresses (the designer had insisted she would go through the front door or the dresses wouldn't be delivered at all). Jackie, therefore, remained disdainful of the style she'd been pressured into. When asked who'd made her dress, she answered, "I wanted to go to France, but a colored dressmaker did it." Jackie later confessed to a friend that she'd felt "like a lampshade" in the gown. 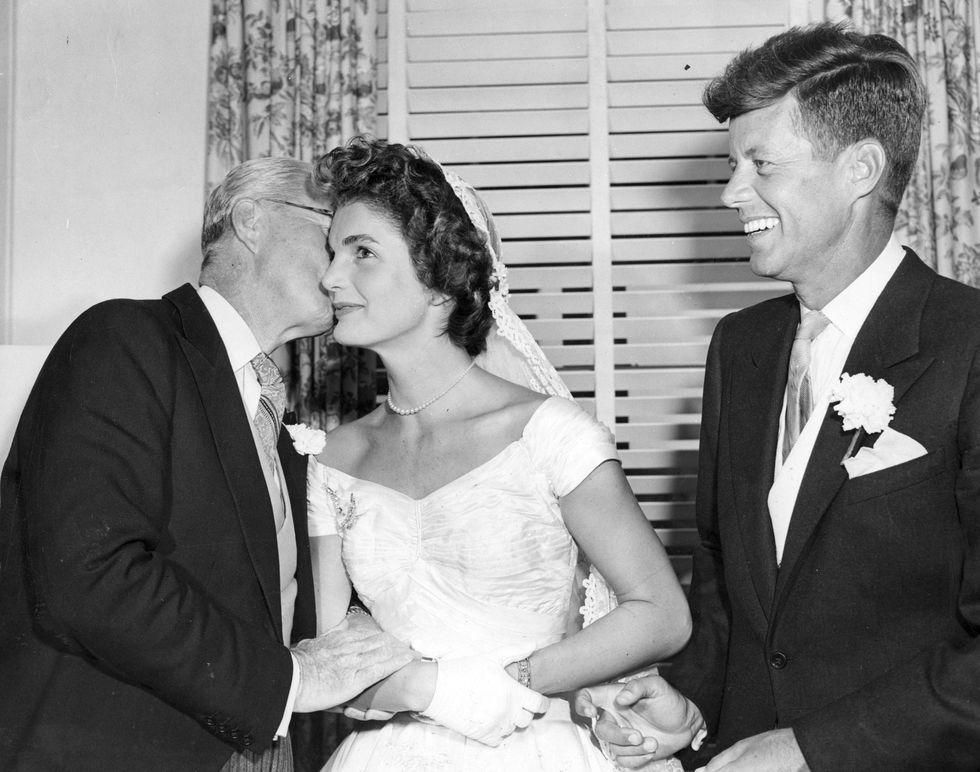 On the morning of September 12, 1953, Jackie donned the disliked dress and a veil that belonged to her maternal grandmother before proceeding to St. Mary’s Church in Newport, where a crowd of 3,000 watched her arrive. Among the 750 guests inside the church were politicians, well-known writers and movie stars. More than 20 people were in the wedding party: the groom's side counted brothers Ted and Robert (as best man), while Jackie's attendants included her sister Lee Bouvier as matron of honor and her future sister-in-law Ethel Kennedy.

In the bride's eyes one important person was missing in action that day: her biological father, John "Black Jack" Bouvier. Relations between Jackie's parents had remained contentious in the years after their divorce, so Bouvier hadn't been invited to a celebratory dinner the night before the wedding. Feeling hurt, Jackie's father had proceeded to get drunk. On the day of his daughter's wedding, Bouvier wasn't able to walk her down the aisle. Instead, her stepfather stepped in to do the honors. Jackie was devastated by her father's absence, though she kept her turmoil hidden inside.

Waiting at the altar, the groom's face was scratched, the result of a bad landing during a trademark Kennedy touch football game the day before. This injury didn't interfere with the ceremony, but Kennedy's notoriously troublesome back barely made it through the service. The officiant was Boston's Archbishop Richard Cushing, who also delivered a personal blessing from Pope Pius XII. 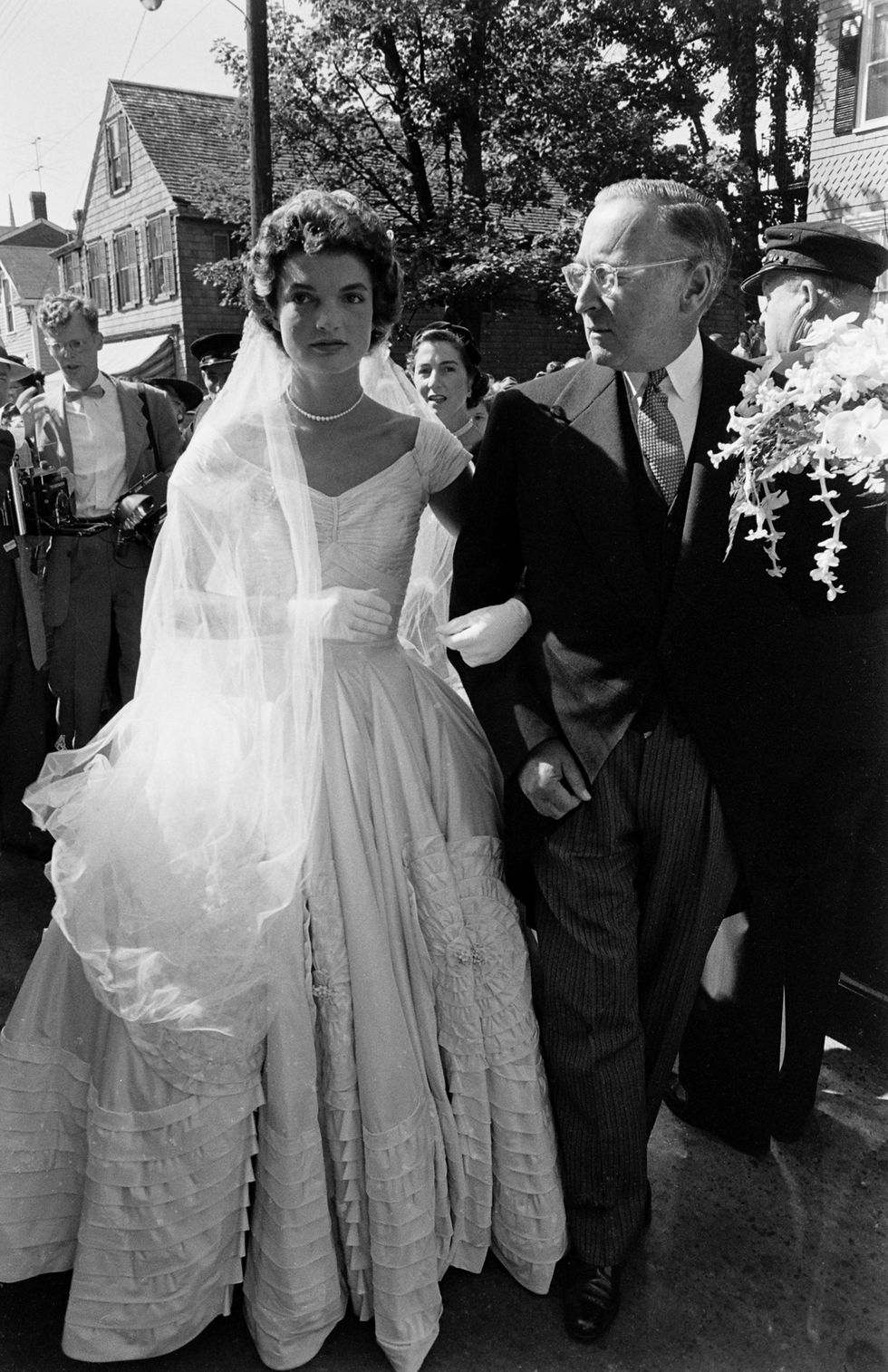 The reception had over a thousand guests

Guests and onlookers created a traffic jam on the way to the reception at Hammersmith Farm, the 300-acre Auchincloss estate. The guest list for the wedding ceremony had been capped by the church's capacity but Joe had invited more people to the reception for a total of 1,200 guests. This resulted in a human traffic jam around the bride and groom, with the new Mr. and Mrs. Kennedy taking two hours to shake hands with their guests.

Jackie and Kennedy eventually had their first dance to "I Married an Angel" and cut a wedding cake that measured four feet in height. Through it all, the media paid close attention. When Life magazine published wedding photos a few weeks later, a guest was quoted as saying the event had been "just like a coronation." In a way, this person was right — the wedding was a first step on the road that took Jackie and John to the White House.