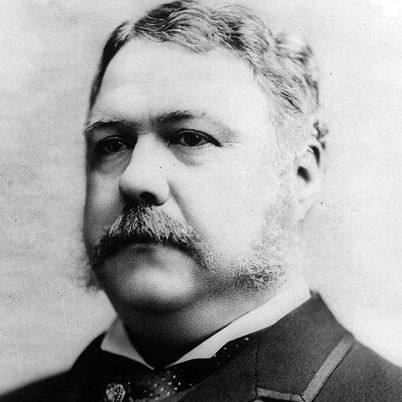 Chester A. Arthur was born on October 5, 1829, in North Fairfield, Vermont. Elected vice president on the Republican ticket of 1880, Arthur acceded to the presidency upon the assassination of President James A. Garfield. As president, he supported the Pendleton Civil Service Act (1883), which provided for the open appointment and promotion of federal employees based on merit rather than patronage. Arthur died in New York City on November 18, 1886.

Chester Alan Arthur was the second son of Malvina (Stone) Arthur and the Reverend William Arthur, a passionate Baptist abolitionist preacher, who emigrated from Ireland. Born in North Fairfield, Vermont, his family moved throughout New York and Vermont, as his father preached in various towns and villages. Throughout Arthur's political career, it was rumored, though never proven, that he had actually been born in Bedford, Quebec, Canada.

Chester A. Arthur attended school in Union Village, New York, and later enrolled at Union College in Schenectady, where he showed more interest in extracurricular activities and politics than his studies. After graduating in 1848, he taught school for a while. He was later admitted to the bar and practiced law in New York City. In 1859, he married Ellen Herndon. The couple would have three children, one of whom died at age 3.

Life as a Political Operative

After the Civil War, Chester A. Arthur became an associate of Republican Party boss and U.S. Senator Roscoe Conkling, who used political patronage and party discipline to advance his power and the Republican Party in New York. Arthur, with his superb organization and administration skills, helped deliver support to the Conklin political machine. As collector of the New York Customs House, he overstaffed positions with political operatives who were loyal to Conklin.

In 1878, President Rutherford B. Hayes attempted to reform the patronage system and ousted Chester A. Arthur from office. As payback, Conklin arranged for Arthur to be on the Republican ticket with presidential nominee James A. Garfield in 1880. Six months after his inauguration, Garfield was assassinated, and Arthur subsequently became the 21st president of the United States.

President of the United States

On several occasions as president, Chester A. Arthur shed his image as a slick political operator. While the Republican Party usually protected big business, Arthur advocated lowering tariff rates to help relieve indebted farmers and middle-class consumers. In 1882, he vetoed a pork-barrel project known as the Rivers and Harbor Act, believing that federal surpluses should go to tax relief rather than government expenditures. In 1883, he became a champion of social service reform, signing into law the Pendleton Act, which established a bipartisan Civil Service Commission.

Though a loyal political party operative and promoter of the patronage system during his earlier political career, as president, Chester A. Arthur demonstrated that he was above party politics by instituting political reform.

Arthur spent more time on his social life and political career than with his family. His wife, Ellen, died in 1880, and Arthur entered the White House a widower. He became a bit of a dandy in his dress and his social circle in Washington, D.C. He lamented the dilapidated condition of the White House, and hired Louis Comfort Tiffany to remodel it into a show place.

Arthur kept the secret that he was suffering from Bright's disease, a fatal kidney ailment, for several years. He didn't receive his party's nomination for a second term as president and in 1885 he returned to his law practice in New York City. As his health declined, he ordered that all of his papers, both personal and professional, be burned.