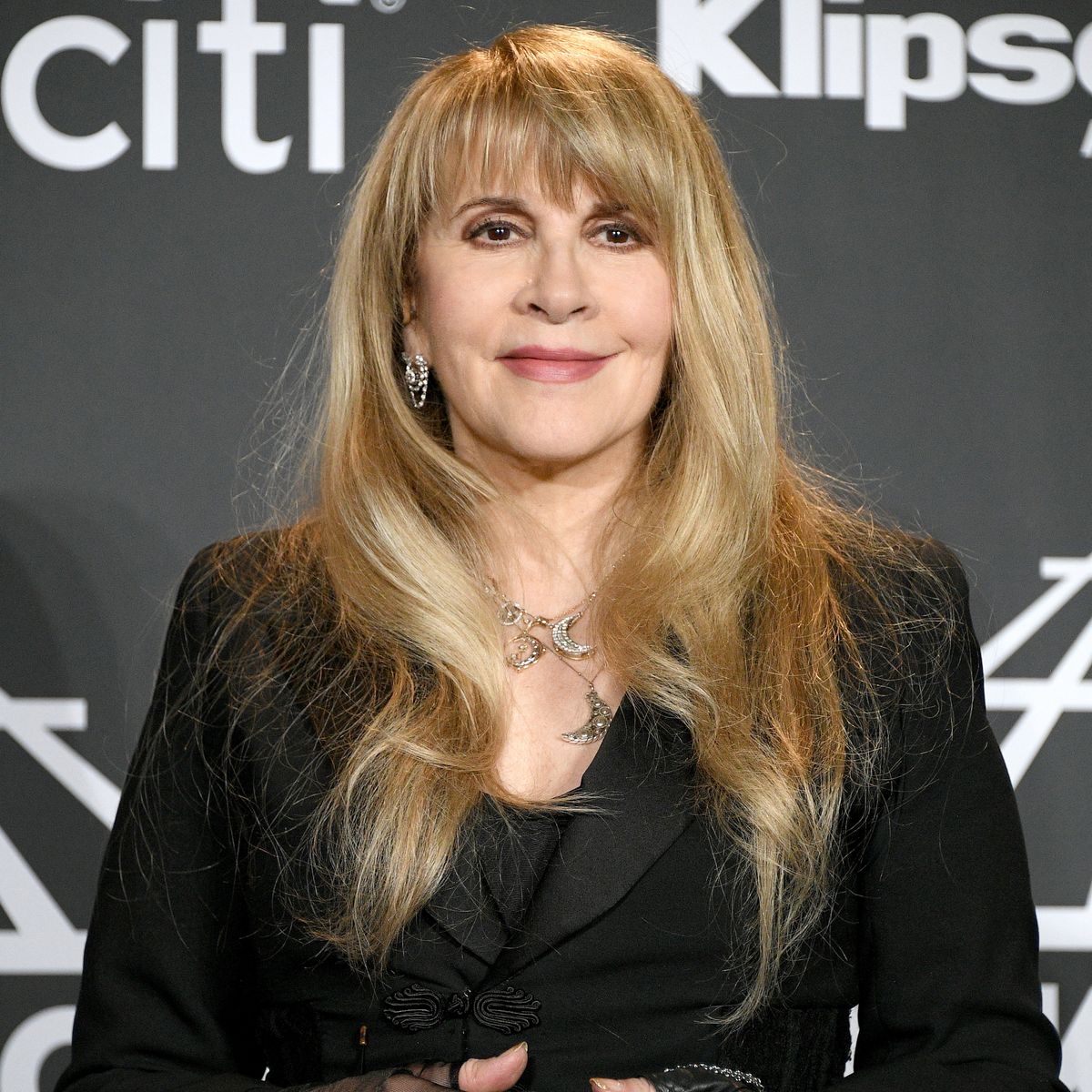 Who Is Stevie Nicks?

Stevie Nicks signed with Fleetwood Mac in 1975, becoming an overnight sensation. She also released solo albums. After years of struggling with addiction (during which time she continued to tour and put out new albums), Nicks regained her health and energy. Fleetwood Mac reunited in 1997 and was inducted into the Rock and Roll Hall of Fame in 1998.

Singer and songwriter Stephanie Lynn Nicks was born on May 26, 1948, at Good Samaritan Hospital in Phoenix, Arizona. Her adopted moniker, Stevie, reportedly came from her childhood pronunciation of "Stephanie" as "tee-dee." Nicks' mother, Barbara, was a homemaker and father Jess Nicks, a corporate executive, first met at Arizona State University. They became college sweethearts, and the couple married in 1947.

The tight-knit Nicks clan included Nicks' paternal grandfather, Aaron Nicks, a would-be country star. Grandfather Nicks handcrafted a guitar for young Stevie and taught her well-known selections from the country music cannon. By the time she was five years old, Nicks was gigging with him at local gin mills. Around this time her brother, Christopher, was born.

As Nicks' father rose through the corporate ranks, the Nicks family skipped around Arizona, New Mexico, Texas, Utah and California. By 1963, the family landed in the suburbs of Los Angeles, and Nicks enrolled at Arcadia High School. While there, she met her best friend, Robin, and joined Changing Times, a band patterned after The Mamas and The Papas. Her tenure with the group was short-lived; the Nicks family soon moved to Palo Alto, California, where Nicks attended Menlo Atherton High School. Here, Stevie met classmate Lindsey Buckingham, a guitarist and fellow songwriter. The two shared a close bond and forged a strong musical partnership.

After high school, Nicks briefly enrolled in San Jose State College, but by 1968 she'd dropped out. The Nicks family relocated once again — this time, to Chicago — but Nicks opted to stay in California. Along with Buckingham, she joined the local band, Fritz, which established a small following. The group opened for bigger acts such as Janis Joplin and Jimi Hendrix before they disbanded in 1971.

By this time, Nicks and Buckingham were deeply romantically involved. The couple continued to collaborate, and soon landed a contract with Polydor Records. In 1972, they released Buckingham-Nicks, an album that went largely unnoticed. In an effort to make ends meet, Nicks worked alternately as a maid, a dental assistant, and a waitress.

Concurrently, Mick Fleetwood, John McVie and Christine McVie of the rock group Fleetwood Mac struggled with band tensions and line-up changes. In 1974, the group started seeking out a new recording facility and arranged a visit to Sound City Studio in the San Fernando Valley — the same studio where Stevie and Buckingham recorded their album. As producer Keith Olsen guided Fleetwood Mac through the facility, he showcased the studio's sound capabilities by playing the Buckingham-Nicks track "Frozen Love." The band was taken with Buckingham's guitar sensibilities.

A few weeks later, Fleetwood Mac's then-guitarist Bob Welch quit the band. In need of a guitarist, Fleetwood remembered Buckingham's track and arranged a meeting with the musician. The group asked Buckingham to join the band, but he refused to collaborate unless Stevie was part of the deal. Fleetwood agreed, and in 1975 Nicks and Buckingham signed on to Fleetwood Mac.

In 1976, the band started recording their sophomore effort, but their personal lives were in total disarray. The rigors of touring had strained Nicks' voice, and she sought medical help. The band was also in the middle of an emotional upheaval, and all of its romantic relationships disintegrated: The McVies decided to divorce, Fleetwood and his wife separated, and Nicks and Buckingham were in the midst of a tumultuous split.

The band continued to record together, however, and their next album, Rumours (1977), became a record-setting hit. It spent 31 weeks at #1 on the Billboard 200 chart; went platinum in both the United States and the U.K.; and earned the group a Grammy Award for Album of the Year in 1978. Nicks' song "Dreams," inspired by the group's dissolving relationships, was the band's first No. 1 single. During this time, Nicks had a brief affair with band member Mick Fleetwood and began an up-and-down relationship with Eagles drummer Don Henley.

READ MORE: Fleetwood Mac: Behind the Drama, Divorce and Drugs That Fueled the Making of ‘Rumours’

The band continued to put out albums, including 1979's Tusk and 1980's Fleetwood Mac Live, but Nicks felt the draw toward solo work. In 1981, she released Bella Donna, which featured guest vocalists Tom Petty and Henley. The album reached No.1 on the Billboard chart, and featured the hit singles "Edge of Seventeen" and "Leather and Lace," as well as a duet with Petty called "Stop Dragging My Heart Around."

Stevie continued on at a prodigious rate, recording 1982's Mirage with Fleetwood Mac and her second solo effort, The Wild Heart, in 1983. Around this time, Stevie's best friend, Robin, succumbed to leukemia. In an effort to provide a mother for Robin's young son, Matthew, Stevie married Robin's widower, Kim Anderson. The relationship lasted less than a year.

Although it went platinum, Nicks' 1985 solo album, Rock A Little, didn't match the commercial success of her previous efforts. The singer also started developing serious problems with alcohol and drugs. She maintained a severe cocaine habit that eventually created a hole in her nasal cartilage. In 1986, she entered the Betty Ford Clinic for a 28-day rehab program, which helped end her chemical dependence.

The following year, she began working with a psychiatrist who recommended she take Klonopin. Although she was done with cocaine, Nicks became addicted to the tranquilizer and was under its influence throughout the better part of the late '80s and early '90s. During this time, she continued to tour and turn out independent records as well as albums with Fleetwood Mac, including the solo effort The Other Side of the Mirror (1989), Behind the Mask with Fleewood Mac (1990) and a solo compilation, Timespace (1991).

Detox and Rock Hall of Fame

After years of addiction, weight gain and exhaustion, Nicks fully detoxed in 1993 and ended her ties to Klonopin. The next year she released Street Angel, another solo album. As her health improved and she regained energy, Stevie returned to the studio to record new songs for multiple soundtracks.

In 1997, Fleetwood Mac reunited and released The Dance. The related tour earned them $36 million. Stevie also put out a boxed set dubbed Enchanted, and added two songs to the soundtrack for Practical Magic (1998). That same year, Fleetwood Mac was given one of the greatest honors in the world of rock: induction into the Rock and Roll Hall of Fame.

Nicks went on to work with rocker Sheryl Crow on Nicks' 2001 solo release, Trouble in Shangri-La. She also put out a new album with Fleetwood Mac, Say You, Will, in 2003. Since then, Nicks has recorded and performed as a solo act and as a member of Fleetwood Mac. Her band, unfortunately, had to cancel part of their 2013 tour because of John McVie's ill health.

In 2014, Stevie released the album 24 Karat Gold: Songs from the Vault, comprised of new versions of demos recorded decades earlier. That year, she also served as an adviser for Adam Levine's team on the singing competition show The Voice, and appeared in two episodes of the cable drama American Horror Story.

In 2018, Stevie readied to join Fleetwood Mac on a new tour, though this one would be without her former flame and longtime bandmate Buckingham.