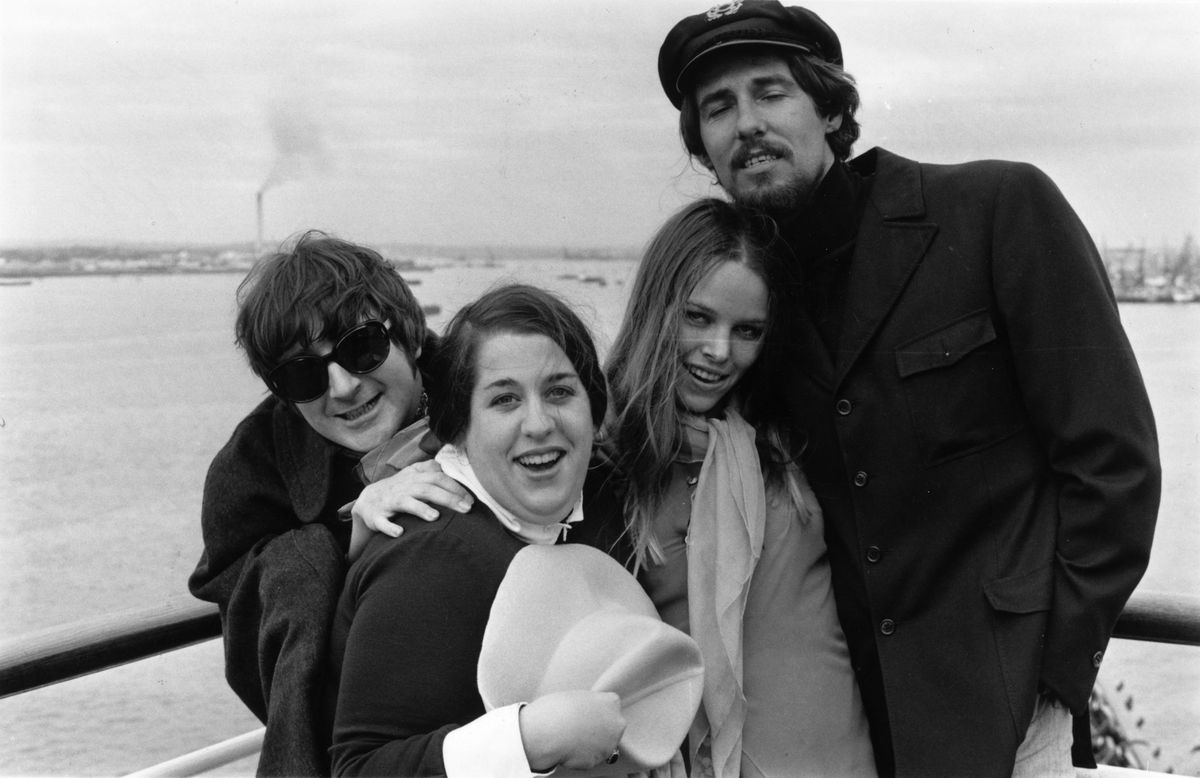 Folk-rockers the Mamas & the Papas — made up of John Phillips, Michelle Phillips, Denny Doherty and Cass Elliot — provided the musical backdrop to the late 1960s with hit songs like "California Dreamin'" and "Monday, Monday." Yet the groovy era didn't save the group from behind-the-scenes upheaval that included affairs and heartbreak, break-ups and reunions, substance abuse and epic parties. As Michelle recalled to Vanity Fair of their time together from 1965 to '68, "It was two and a half years of total melodrama."

The drama started for the Mamas & the Papas before they were even a group. John, who'd left his first wife to marry Michelle, was ready for the couple to sing with tenor Denny Doherty. But John objected when Elliot, another figure in New York City's music scene, wanted in as well.

Elliot's voice wasn't a problem, as she had a standout contralto. She was also fun to be around. However, John felt her being overweight would turn off audiences. According to Rolling Stone, Elliot was only allowed to sing with the other three after she'd followed them around, including to the Virgin Islands (the four did travel there, but Elliot's sister has suggested this version of the story may have been skewed due to John's jealousy that Elliot became the breakout star of the group).

According to Elliot, her trip to the islands was significant in another way: It left her with an expanded vocal range for the beautiful harmonies John composed. "I did get hit on the head by a pipe that fell down and my range was increased by three notes." Elliot told Rolling Stone in 1968. "I had a bad headache for about two weeks and all of a sudden I was singing higher. It’s true." The group headed to California and signed to a record label in 1965. 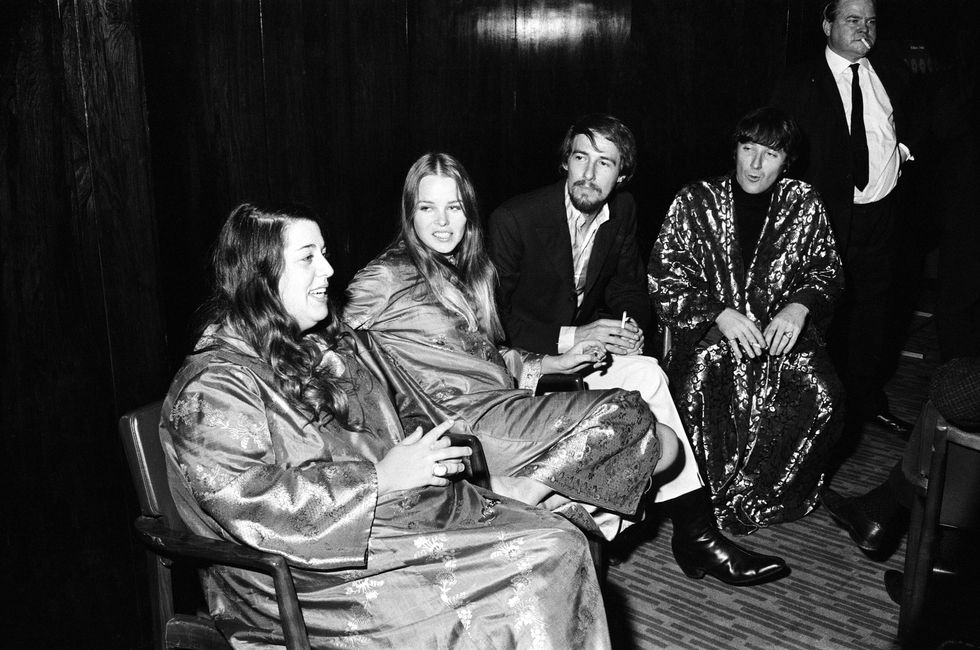 The Mamas & the Papas in 1967; Photo: Wilson/Mirrorpix/Getty Images

Their first album, If You Can Believe Your Eyes and Ears (1966), was a huge success. They were one of the first well-known groups to have men and women singing together, a set-up that in their case opened the door to romantic resentment. Elliot was in love with Doherty, who wasn't interested in her as a romantic partner. Michelle was a believer in free love, so marriage to John didn't keep her from an affair with Doherty (among others).

In 2007, Michelle recalled the sexual tensions in the group to Vanity Fair, saying, "The four of us would sit around, saying, 'O.K., you're gonna sing the third,' and 'You're gonna do the bop da bops,' and there'd be so much sexual energy between Denny and me that we’d be playing footsie under the table, and Cass and John didn’t notice it." But the liaison eventually came to light. Michelle later shared one painful ramification: "Cass confronted me and said, 'I don't get it. You could have any man you want. Why would you take mine?'"

John objected to his wife being with his tenor, though at his behest he and Doherty transformed the experience into the co-written "I Saw Her Again" (Doherty sang lead; it was another hit). However, according to People, after learning his wife was involved with Gene Clark of the Byrds, John kicked Michelle out of the group and brought in a new "Mama" in the midst of recording the group's second album, The Mamas & the Papas (1966). According to Vanity Fair, Michelle fought for her place and eventually returned, thanks in part to fan support. It's unknown which parts of the second album have Michelle singing and which have her temporary replacement's voice.

Even as the Mamas & the Papas ruled the charts, Elliot continued to have little luck in love. "It's easy to find boyfriends," she once said. "I buy them a motorcycle, a leather suit, and put them in acting school." She was married, but it was an arrangement intended to help a friend avoid the draft. In 1967, she gave birth to daughter Owen Elliot-Kugell, but Elliot never publicly named the father.

Elliot may not have found true love, but she had a wide social circle. In 1968, Rolling Stone described her as "the unchallenged queen of the pop music scene" and her memorable parties were a "Who's Who" of musical talent. She wanted friends David Crosby, Stephen Stills and Graham Nash to sing together, thus helping Crosby, Stills & Nash take shape. "Music happens in my house and that pleases me," she told Rolling Stone. "Joni Mitchell has written many songs sitting in my living room."

Her social status put Elliot in a better position to stand up for what she wanted with the Mamas & the Papas, which led to frequent clashes with John over the band's path. Michelle later said, "Cass was unique in the sense that she had some money, she had a lot of friends, and she was not dependent on John."

Recordings for the group's third and fourth albums were very tense

While making great music, the Mamas & the Papas also drank, smoked and indulged in other vices. Doherty later told the New York Times, "The first thing I did in the morning and the last thing I did at night was have a blast of rum." According to Michelle, they "never went into the studio without a case of Crown Royal and a bag of pot." However, though the group had taken LSD together early in their relationship, Michelle also said they "never, ever worked on acid."

John and Michelle helped organize 1967's Monterey International Pop Festival, which featured Jimi Hendrix and Janis Joplin. The Mamas & the Papas performed there, but their time together was coming to an end. Though Michelle and John got back together long enough to have daughter Chynna (born in 1968), their relationship was still marked by infidelity and other problems (they would divorce in 1970). Things had been tense for everyone as they recorded Deliver (1967), their third album, and working on 1968's The Papas & the Mamas wasn't any better.

Cass admitted to Rolling Stone in 1968, "I didn’t just want to be part of a group. I wanted to be able to do television, and a movie it came up, to sort of diversify myself, to extend myself. Within the framework of a group, that freedom is not possible." She proved her capabilities that year with solo hit "Dream a Little Dream of Me." Her feelings for Doherty remained unrequited and he wasn't interested when she proposed marriage. By 1969, the group had broken up. 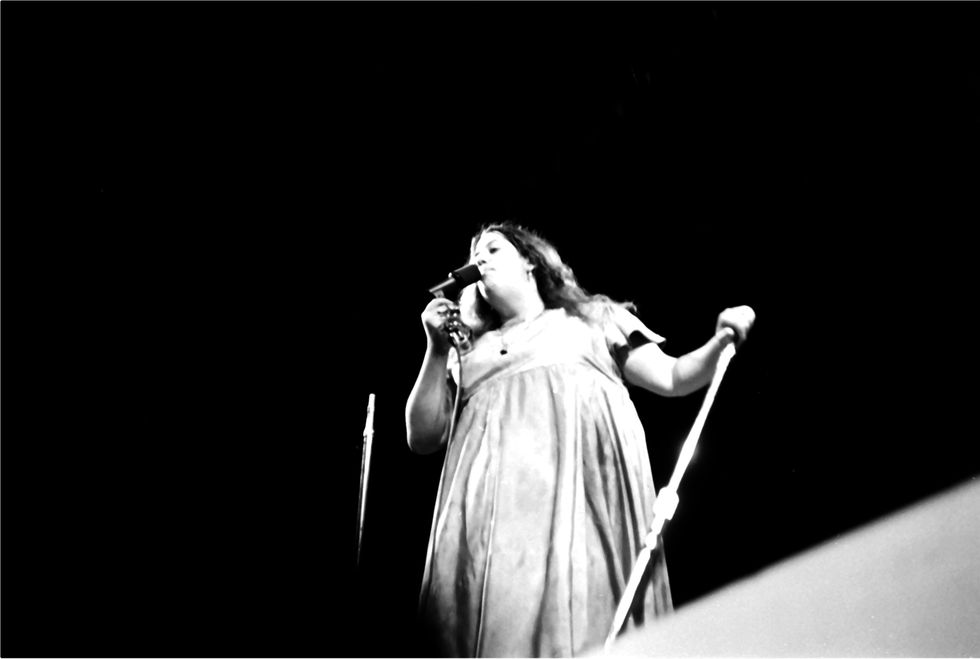 The group reunited but the album was a flop

The Mamas & the Papas had a tangential connection to Charles Manson and his 1969 murder spree. Manson had attended at least one of Elliot's parties. And after the Manson Family killed Sharon Tate and others, Tate's husband Roman Polanski thought John was the killer, motivated to seek revenge because Polanski had slept with Michelle.

The Mamas and Papas got back together to make another album, but the group's heyday was over and People Like Us (1971) was a flop. Though she had an unsuccessful show in Las Vegas in 1968, Elliot found success on her own with film and television appearances, and with singles like "Make Your Own Kind of Music." In 1974, she'd completed two weeks of sell-out shows in London before dying on July 29. Though initial reports said she'd choked on a ham sandwich, in reality, she'd suffered a heart attack, possibly because her body had been weakened by extreme dieting.

Drug use took over John's life. At one point, his hands began to blacken due to damaged circulation. He ended up in rehab in New Jersey in 1980 following an arrest for drug distribution and needed a liver transplant in 1992. "I have no idea what my music would’ve been like without the drugs," he once admitted. He did find some continued success in his field, co-writing "Kokomo" for the Beach Boys, working on solo projects and putting together the New Mamas & the Papas. One member of this group was his eldest daughter Mackenzie, who accused her father of rape and incest a few years after he died in 2001.

Doherty was a heavy drinker for years, though he successfully stopped. He eventually starred in the children's TV show Theodore Tugboat. Michelle found success as an actress, including a memorable role on TV's Knots Landing. She had a days-long marriage to Dennis Hopper, as well as romances with Jack Nicholson and Warren Beatty. After Doherty died in 2007, Michelle became the last surviving member of the four original Mamas and Papas.