In April 1978, Betty Ford announced that she had an addiction to prescription medication, and would be seeking treatment for that addiction. Later that month, the former first lady disclosed that she was also struggling with and receiving treatment for alcoholism—something she had only been able to admit to herself after spending some time in rehab.

Betty Ford’s candor about her addictions was remarkable for its time. In 1978, there weren’t many places Americans could go to receive treatment for addiction. Betty was able to go through a rehabilitation program at Long Beach Naval Hospital, and her experience motivated her to found the Betty Ford Center in Rancho Mirage, California to help others who were struggling with addiction. 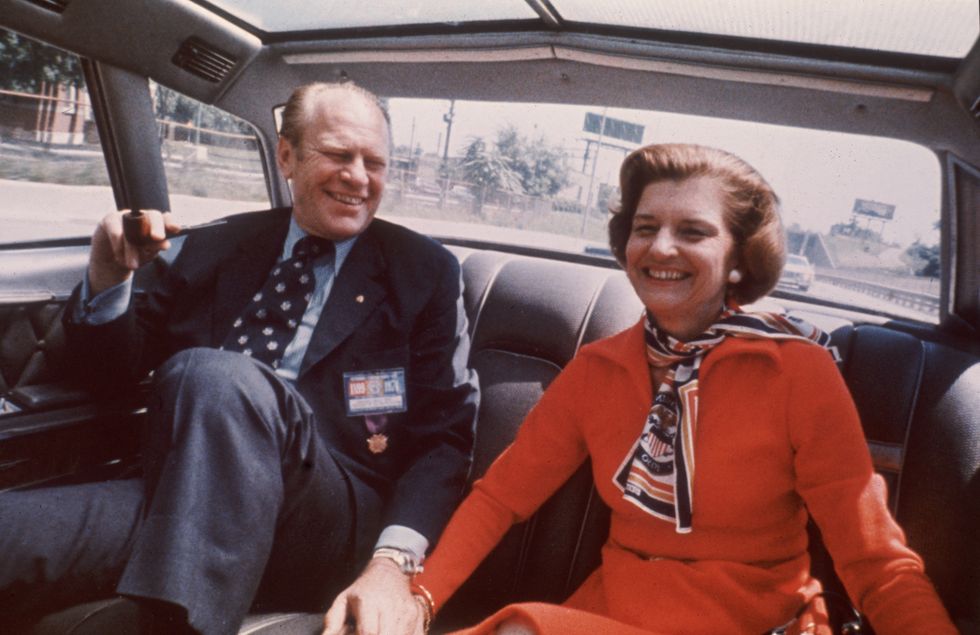 By the time Betty Ford became first lady in August 1974—the month her husband, Gerald Ford, succeeded Richard Nixon—the former dancer had already been taking prescription pills for years to treat pain caused by arthritis and a pinched nerve. Unlike today, these medications didn’t come with warning labels advising not to mix them with alcohol. So when Betty started to take pain medication, she continued her usual pattern of having a cocktail at five o’clock.

“She was also prescribed Valium, which was very common for women in the ‘60s,” says Lisa McCubbin, author of Betty Ford: First Lady, Women's Advocate, Survivor, Trailblazer. The anti-anxiety pill “was called ‘mother’s little helper’, it was prescribed so much. And Betty admitted publicly that at times she took it three times a day.”

At the White House, Betty had access to even more types of medication. White House physician William Lukash prescribed her pills for whatever problem she came to him with, whether it was going to sleep or staying awake.

Eventually, her assistants grew concerned. They knew she was taking a lot of medication, and suspected it was affecting her behavior. They noted that she sometimes slurred her speech or didn’t make sense, or appeared drowsy in the middle of the day.

“Her assistants actually had such concern about this that they went and spoke with the White House doctor,” McCubbin says. The doctor “basically told them to go away, that they didn’t have any medical training and it wasn’t any of their business.”

Betty Ford’s dependency on pills and alcohol grew worse after she and her husband left the White House in January 1977 and moved to Rancho Mirage, California. With Gerald away much of time and her four children out of the house, Betty felt lonely and depressed, and became more dependent on pills and alcohol.

It was Susan Ford, Betty’s youngest child, who began to notice there was a problem. Susan lived in nearby in Palm Desert, and became concerned by her mother’s slow, slurred speech and the way she shuffled around the house. One night, when Betty was alone, she fell in the bathroom and hurt herself. Her family began to worry that if something didn’t change, they could lose her.

With the help of medical experts, Betty’s family and friends organized an intervention—a fairly new concept at the time—for her in April 1978. After the intervention, Betty agreed to enter a rehabilitation program at the Long Beach Naval Hospital. The hospital had started its rehab program a few years before to treat Naval service members and their dependents. (Gerald Ford served in the Navy during World War II.)

Rehab “was a rude awakening for her,” McCubbin says. Betty was public about the fact that she was entering rehab for doctor-prescribed medication; but at the beginning, she didn’t agree that she had a problem with alcohol. Within a couple of weeks in the program, she was able to admit—both to herself and the public—that she was an alcoholic.

Betty Ford established a rehab center to help others

Betty Ford’s public candor around her addiction mirrored the way she had handled her breast cancer diagnosis and radical mastectomy in 1974. Women wrote her letters thanking her for talking about the disease publicly, and her experience motivated many women to perform self-exams or receive medical checks for breast cancer.

Betty’s public struggles with pills and alcohol brought attention to addiction issues, and highlighted the fact that substance abuse was a problem for women as well as men. A year after her own intervention, she participated in one for her friend and neighbor, Leonard Firestone, retired president of Firestone Tire & Rubber Company. Firestone entered rehab, and when he got out, he convinced Betty that they should open their own rehab center.

At first, Betty wasn’t sure she wanted to attach her name to a rehab center, fearing that it would be embarrassing for her if she relapsed, McCubbin says. But she went ahead with it, founding the Betty Ford Center with Leonard Firestone and the physician James West in 1982.

Betty, who died in 2011, was very active at the center. She visited and talked with patients, and established a rule that the center could not disclose the identity of anyone staying there. And, at a time when most people who sought rehab were men, she mandated that the Betty Ford Center always keep enough beds available for women as well, acknowledging the reality that women struggle with addiction and deserve to have a place to go for treatment.