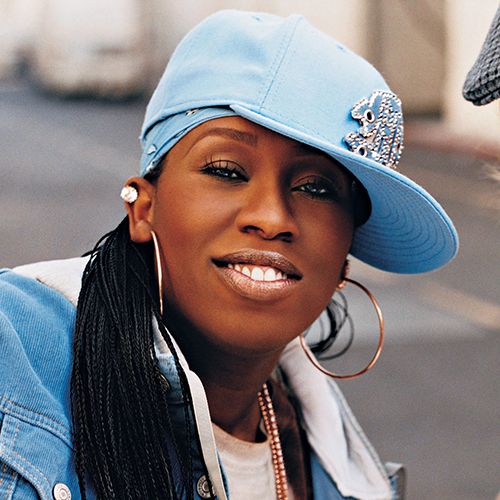 Photo: The Gap via Getty Images

Who Is Missy Elliott?

A four-time Grammy Award-winning rapper, singer, songwriter, dancer and producer, Missy "Misdemeanor" Elliott has consistently pushed the boundaries of hip hop with a string of classic hit singles — such as "Get Ur Freak On," "Work It," "Lose Control" and "Gossip Folks." She is also a formidable businesswoman who retains full creative control over her music, videos and productions. A longtime collaborator with her childhood friend from Virginia, the producer Tim "Timbaland" Mosley, she has also worked with Jay Z, Beyoncé, Katy Perry, Madonna, Janet Jackson and many more. Elliott is a positive role model who projects strength, confidence and female empowerment — but has never sacrificed her sense of fun or her capacity to entertain.

Elliott was born Melissa Arnette Elliott on July 1, 1971, in Portsmouth, Virginia. She is the only child of Ronnie, a U.S. Marine at the time of her birth, and Patricia, who later worked for a power company. While Ronnie was still a Marine, the family lived in a mobile home in Jacksonville, North Carolina, but he struggled for work after his military service and they moved back to Portsmouth, living in a rat-infested shack.

Ronnie was violent, and beat Patricia in front of their daughter; Elliott experienced more trauma at age eight when she was raped by an older cousin. She wrote to Michael and Janet Jackson, begging them to come and save her — she already knew she wanted a future in music. They never wrote back. "I cried every night about that," Elliott told The Guardian in 2001. "Now I'm friends with Janet. But sometimes we'll be in a club together and I'll find myself thinking, 'But you never wrote me back when I needed you.'"

As Elliott entered her teens, Ronnie became even more violent toward Patricia and Elliott begged her mom to escape from him and take her, too. This finally happened when Elliott was 14, though life continued to be a struggle financially.

Elliott grew up in the Baptist faith and has said that her religious beliefs will always be a large part of her life. She explained in 2003 that her faith helped her cope with her childhood abuse — and subsequent depression. "You have to find some kind of peace," she said. "I believe in a higher being, and that gives me faith to be strong and go on."

While she was still at school she formed a girl group, Sista, and after auditioning for the producer DeVante Swing, they were signed to his label, Swing Mob Records — and Elliott, who by now had finished her education, moved to New York. But her big break turned out to be a false start, as the label folded before Sista's debut album — most of which Elliott had written herself — was ever released.

After Sista split up, Elliott continued writing and producing songs, often working with her childhood friend, the producer Tim "Timbaland" Mosley — crafting tracks for Aaliyah and SWV, among others. She wrote her first hit, "That's What Little Girls Are Made of," for Raven-Symoné in 1993, and made her first appearance as a featured vocalist in 1996 with a guest verse on Sean "Puffy" Combs' remix of "The Things You Do," a song Elliott had co-written for Gina Thompson.

This brought her to the attention of Sylvia Rhone, the CEO of Elektra Entertainment Group, who gave Elliott the chance to form her own label, Goldmind. It was on Goldmind, which Elektra distributed, that Elliott released her debut album, Supa Dupa Fly, in 1997. The album went platinum and earned Elliott the accolade of rap artist of the year from Rolling Stone. She continued her prolific work rate, co-writing and co-producing two songs for Whitney Houston's 1998 album, My Love Is Your Love, and appearing on the Spice Girl Mel B's solo single "I Want You Back," which went to No. 1 in the U.K.

Elliott was hailed by The New Yorker as the "biggest and blackest female rap star that Middle America has ever seen," who had "avoided the prevailing stereotypes of the music-video industry." Meaning, she did not pander to the male gaze as many female artists did — or felt compelled to do — during the height of the MTV era. She projected confidence through her personal style instead, donning an inflatable bodysuit and outsized shades in the video for "The Rain," and a red-and-white space suit for "Sock It to Me."

Her message has always been that women "are equal to men, as important as men and as powerful," noted the fashion magazine Dazed retrospectively, in 2016. "If you love Nicki and Beyoncé, it's important to remember the artist who paved the way."

Elliott's next two albums — Da Real World in 1999 and Miss E … So Addictive in 2001 — also went platinum. In 2002 her fourth album, Under Construction, which featured collaborations with TLC, Beyoncé and Jay Z, broke sales records for a female-led rap album, exceeding 2.1 million copies in the United States. The following year she remixed Madonna's single "American Life," and they performed together with Britney Spears and Christina Aguilera at the MTV Video Music Awards; Elliott also found time to put out a fifth album, This Is Not a Test, which yielded the hit singles "Pass That Dutch" and "I'm Really Hot."

In 2002 Elliott won her first Grammy award, for her groundbreaking single "Get Ur Freak On" — its stuttering, tabla-laden beat was created by Timbaland after he heard bhangra music while traveling. "Get Ur Freak On" sounded unlike anything heard in hip hop before — or since. She went on to win Grammys for the songs "Scream aka. Itchin'" (2003) and "Work It" (2004), for her album Under Construction (2004) and for the video for "Lose Control" (2006).

'The Cookbook' and Weight Loss

The Cookbook, released in 2005, helped spark the EDM boom by sampling Cybotron's early techno classic, "Clear," on the single "Lose Control." But by 2008 she began experiencing dramatic weight loss and was diagnosed with Graves' disease — a rare autoimmune disease that attacks the thyroid gland. Symptoms can include muscular weakness, hair loss, insomnia and involuntary tremors. She learned to manage the condition partly through diet and exercise, and partly with medication.

As a result Elliott withdrew from the spotlight for many years, though she continued to write and produce for other artists, including Jennifer Hudson, Monica, Keyshia Cole and Sharaya J., one of her protégées on Goldmind. She made guest appearances, too, notably on the remix of Katy Perry's "Last Friday Night (TGIF)," which went to No. 1 on the Billboard Hot 100 chart in 2011. There were also appearances on records by Little Mix and Eve, while her collaboration with Kelly Rowland and Fantasia on the song "Without Me" received a Grammy nomination in 2013.

After appearing with Perry during the 2015 Super Bowl halftime show, Elliott returned to the front line in November with the Pharrell-produced single "WTF (Where They From)" — a riotous tongue-twisty club banger that ranks among her finest work: it won widespread praise from the critics, was certified gold in the U.S. and has been streamed more than 60 million times on YouTube. A second single, "Pep Rally," was first aired in February 2016 on an Amazon commercial during the Super Bowl.

A few months later she made a joyful appearance with Michelle Obama on James Corden's "Carpool Karaoke" — Elliott said afterward she felt she was "daydreaming" when the First Lady began rapping her lyrics. A third comeback single, "I'm Better," featuring a debut rap from her regular co-producer Lamb, has been well received.

In an interview with Billboard in 2015, Elliott revealed she had six houses (two in Virginia, two in Miami, one in Atlanta and one in New Jersey) and a world-class collection of exotic cars. But she also admitted that when it comes to music her trusted circle of collaborators is quite small, and that she still suffers from shyness — even Timbaland has never seen her record in the studio. "I never record in front of anybody," she said. "It's just me and my little Yorkies, Poncho and Hoodie."

Working her way back into the spotlight, Elliott joined rising singer-rapper Lizzo on the dance track "Tempo," which earned its release as a single in July 2019. Around that time, she became the first female rapper to be inducted into the Songwriters Hall of Fame, and was honored with the Michael Jackson Video Vanguard Award at the MTV Video Music Awards.

Adding to what was already shaping up to be a triumphant year, Elliott in August 2019 dropped the well-received EP Iconology, her first collection of new music in 14 years.