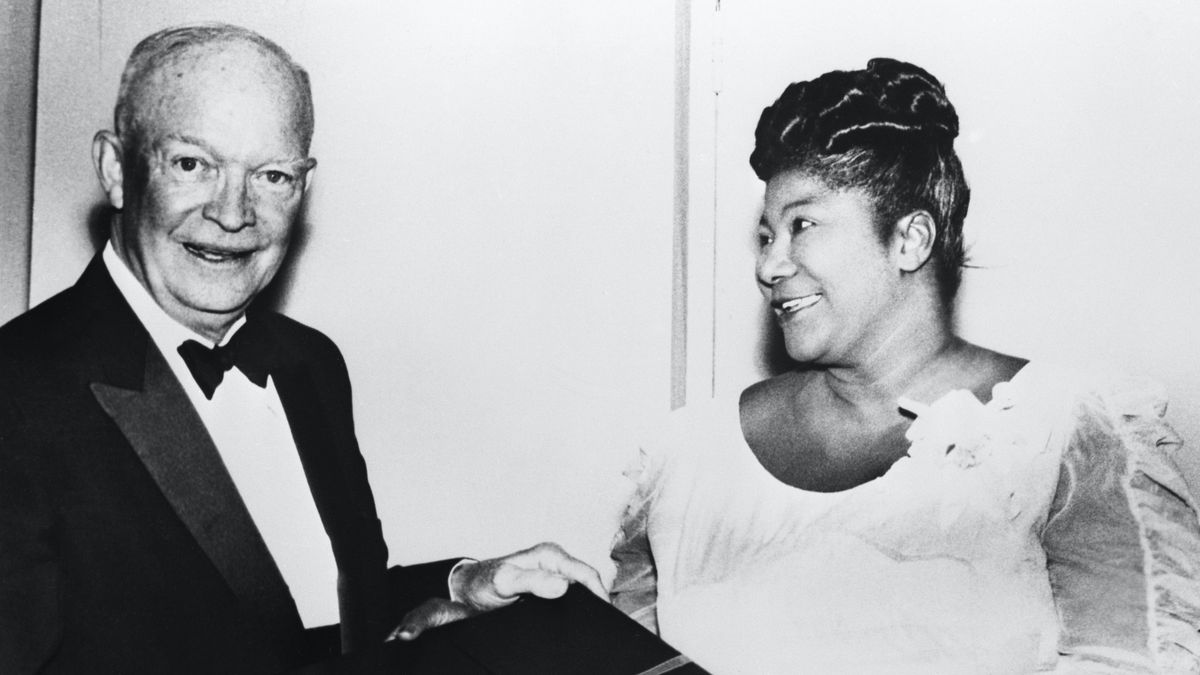 Mahalia Jackson occupied an unusual place in 20th century American culture. Born into poverty in New Orleans, she became a wealthy, beloved recording artist despite the limited opportunities allocated to Black women, her refusal to perform anything besides gospel standards and a willingness to wear her political affiliations on her sleeve. Here are eight moments in which the "Queen of Gospel" showcased her formidable influence beyond the recording studio:

Jackson had been stumping for preferred candidates for more than two decades, but she made her presence felt on a national scale at the August 1956 Democratic Convention in Chicago. Undaunted by the boisterous crowd, she quieted the delegates with the slowly building "I See God," before winning over remaining skeptics with a voice that powered through the International Amphitheatre. "There wasn't a sound," recalled her label owner and collaborator Mitch Miller in Laurraine Goreau's biography Just Mahalia, Baby. "You ... didn't dare breathe, it was such a tremendous moment. There wasn't a dry eye in the house when she got through." 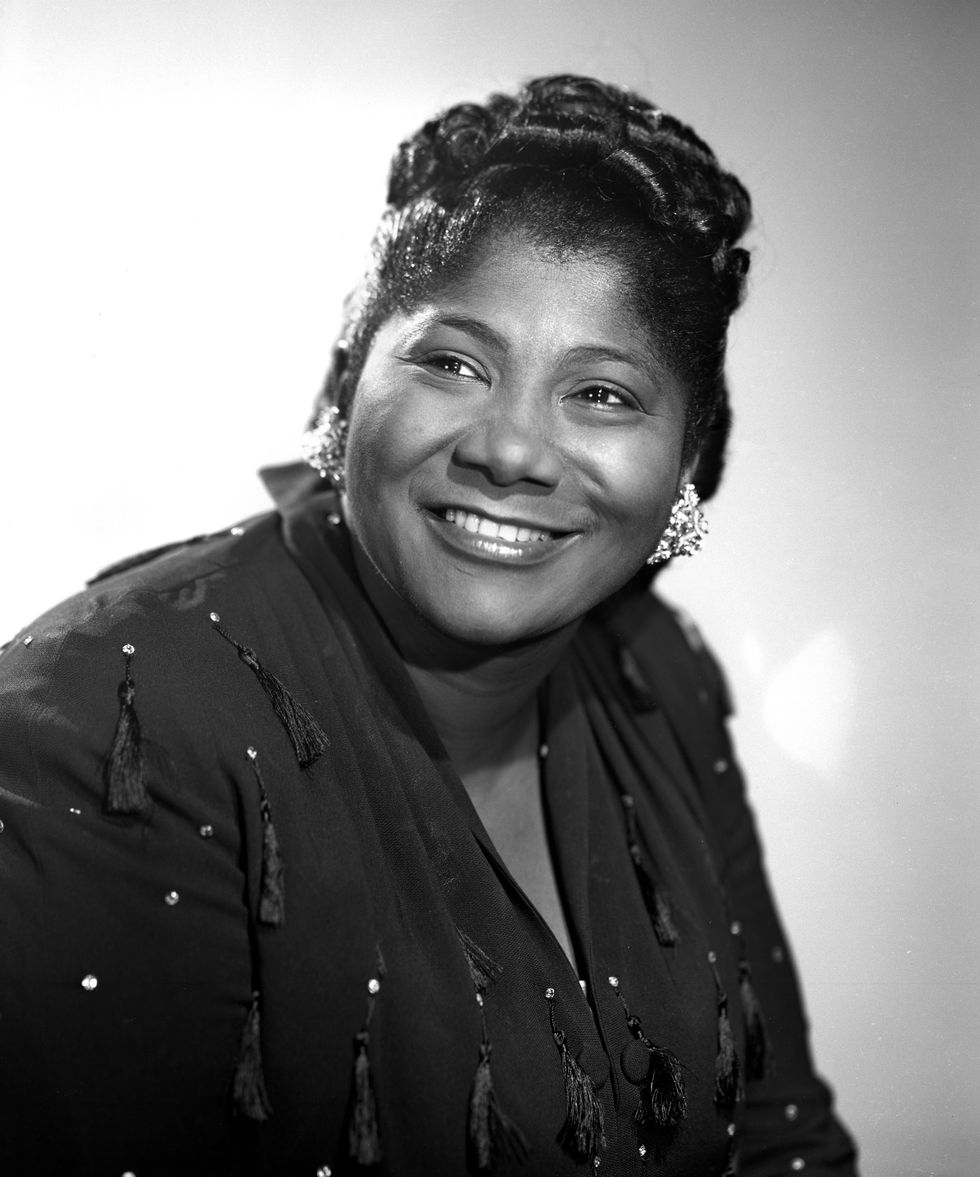 As the foot soldiers of the Montgomery Bus Boycott strained to reach the finish line, their movement got a much-needed jolt of star power with Jackson's performance at St. John A.M.E. Church on December 6, 1956. It was the first public pairing of the gospel queen and an ascendant Baptist minister named Martin Luther King Jr. While the boycott went down as a success with the city's capitulation two weeks later, the bombing of fellow minister Ralph Abernathy's home, where Jackson had stayed in Montgomery, demonstrated the immense risks undertaken by everyone involved.

May 1957: Prayer Pilgrimage for Freedom

As the civil rights movement continued gaining steam, Jackson joined its leaders to celebrate the third anniversary of the landmark Brown v. Board of Education ruling at the May 1957 Prayer Pilgrimage for Freedom in Washington, D.C. The lone soloist invited to perform alongside the 14 speakers, Jackson roused the 25,000 people in attendance with one of her signature songs, "I've Been 'Buked and I've Been Scorned," though the day is perhaps best remembered for propelling King into the spotlight with his "Give Us the Ballot" speech.

Having long since established herself as a Chicago mainstay, Jackson joined the city's power players to welcome Denmark's King Frederik and Queen Ingrid to an October 1960 reception hosted by Mayor Richard Daley. The songstress delivered the goods on stage, dazzling the visiting royals with her rendition of "Down by the Riverside," and displayed her unfiltered charm by pushing the queen to vote for John F. Kennedy for president.

Cementing her status as an A-list celebrity, Jackson was invited to join Laurence Olivier, Gene Kelly, Leonard Bernstein and other luminaries at the Frank Sinatra-directed JFK Inaugural Gala on January 19, 1961. The event is remembered for numerous reasons, including the blizzard that knocked out television coverage and prevented some performers from returning to their hotel rooms to change outfits, but Jackson nevertheless found a way to stand out with her singing of the national anthem.

One of the defining moments of the civil rights era, the August 28, 1963, March on Washington drew an estimated 250,000 people to the Lincoln Memorial to hear heavy-hitting activists A. Philip Randolph and John Lewis call for change alongside protest singers like Bob Dylan and Joan Baez. Jackson thrilled as the final musical guest, performing "I've Been 'Buked and I've Been Scorned" and "How I Got Over," before nudging King toward history midway through his speech by urging him to "Tell 'em about the dream, Martin."

Jackson's final presentation for King came at a public service for the great orator, five days after he was fatally shot on a Memphis hotel balcony in April 1968. After the funeral procession reached Atlanta's Morehouse College, the shaken singer honored her old friend's last request with an emotional performance of the standard "Take My Hand, Precious Lord." As noted in Just Mahalia, Baby, Jackson "sang out her sorrow, sang a plea for forgiveness of mankind, sang for the soul she knew was sitting at Jesus' side. 'Save me a place, Martin. Save me a place.'"

All but retired from public political efforts at this late stage of life, Jackson nevertheless dutifully represented the stars and stripes with a spring 1971 tour that brought her before the heads of state of Japan and India. The first Western singer invited to Japan's Imperial Palace since World War II, she delivered a series of standards described by Empress Nagako as "very moving of the spirit." Days later, Jackson made such an impression on Indira Gandhi that the busy prime minister called off her planned exit from the New Delhi concert hall and stuck around, watching from a fire exit, as the gospel singer belted out "We Shall Overcome" for an encore.