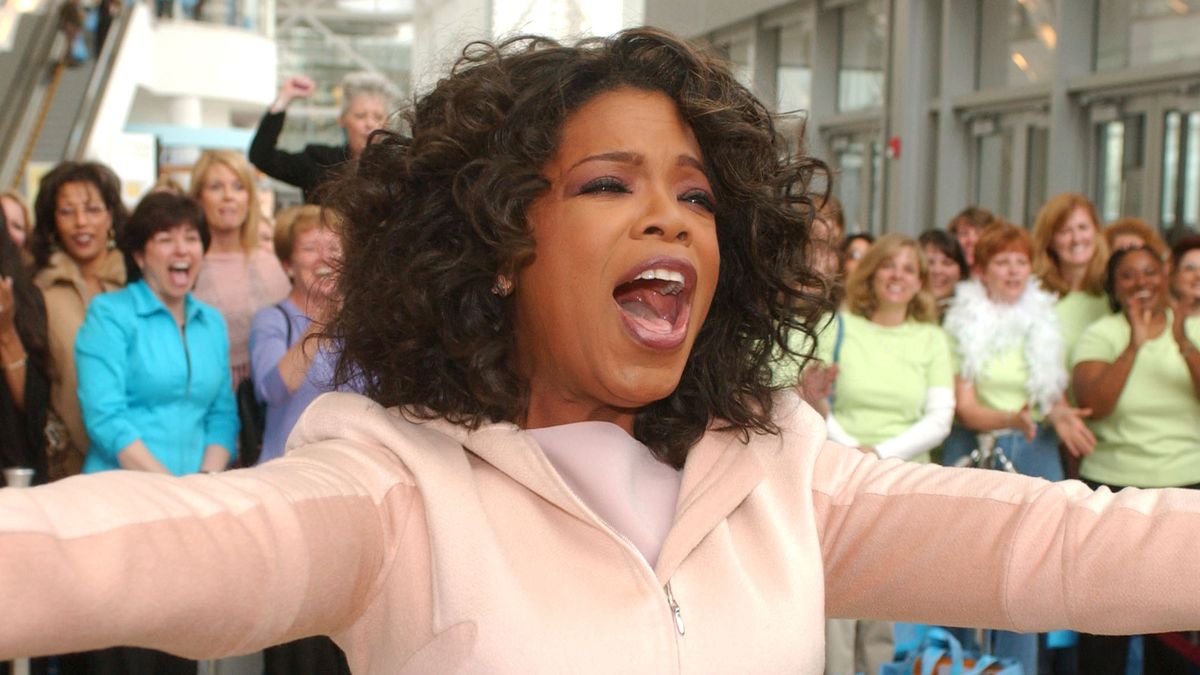 Shock. Tears. Tight hugs. Screams. Utter mayhem. Oprah Winfrey was able to incite all of the above with the excited repetition of just one now-iconic four-word phrase: "You get a car!" The Emmy-winning talk show host would go on to shout the phrase 12 times in total during the September 13, 2004 season premiere episode of The Oprah Winfrey Show. But the sound of those words (in Winfrey's trademark bellow, no less) will forever reverberate in pop culture enthusiast's memories — as well as be immortalized as one of the most epic talk show moments of all time.

Oprah teased the audience and initially gave away only 11 cars

To build anticipation during the episode, Winfrey, who's stated that she'd given away everything from televisions and refrigerators to pajamas and free trips over the course of her daytime talk show's historic 25-year run, called 11 audience members to the stage and dropped the bombshell that all 11 of them would each be getting their "wildest dream" in the form of an estimated $28,5000 brand-new Pontiac G-6 sedan.

The giveaway already would have been massive as it was, but, true to form, the media mogul had another trick up her sleeve. As producers distributed small white boxes wrapped in red ribbon to the rest of the audience, Lady O explained that there was actually one car left that would be gifted to whomever found a car key in their gift box.

The ensuing celebration was unlike anything many daytime viewers had seen before. "The reason why I was screaming the words is because other people were screaming so loudly, I thought they didn't understand or wouldn't understand what had just happened and what I was saying," Winfrey later explained. "What is just thrilling about that moment is you can see the wave of understanding hitting each person... People at first didn't even understand what the prize was, what the joke was, what the fun of it was. And so that's why I was doing that."

READ MORE: Oprah Winfrey: All the Ways the First Black Female Billionaire Has Made History

Oprah gave away huge giveaways her entire career... but this one is the most memorable

Of course, this wasn't Winfrey's first big giveaway though. In 1996, for example, she gifted her entire audience (and their families) with a trip to Disney World. The audience freebies didn't slow during the show's remaining years on the air either. During a subsequent giveaway episode, teachers from around the country received gifts totaling an approximate $13,000. Among their goodies: a television set, a laptop, a washer/dryer, champagne glasses, and a leather duffel bag. Kicking off the show's 25th and final season, Winfrey even invited her audience to accompany her on an all-expenses-paid international vacation to Australia. (Fun fact: By the time The Oprah Winfrey Show ended in May 2011, Winfrey had given away a total of 570 cars.)

The epic 2004 car giveaway ended up being a learning experience for producers in terms of how they handled future gifting, too. Although the Pontiac cars were technically free, some audience members later claimed they'd taken an unexpected financial hit, having to pay federal and state income taxes on the value of their new vehicle. While amounts varied based on the individual's tax bracket, estimated costs ended up averaging around $7,000 per car. When the free Australia trip was announced, the show reportedly even had a CPA waiting in the wings to settle all of the vacation's tax-related issues.

Despite that roadblock, Winfrey's many giveaways over the years — and this highly parodied moment in particular — remain among so many people's favorite things.