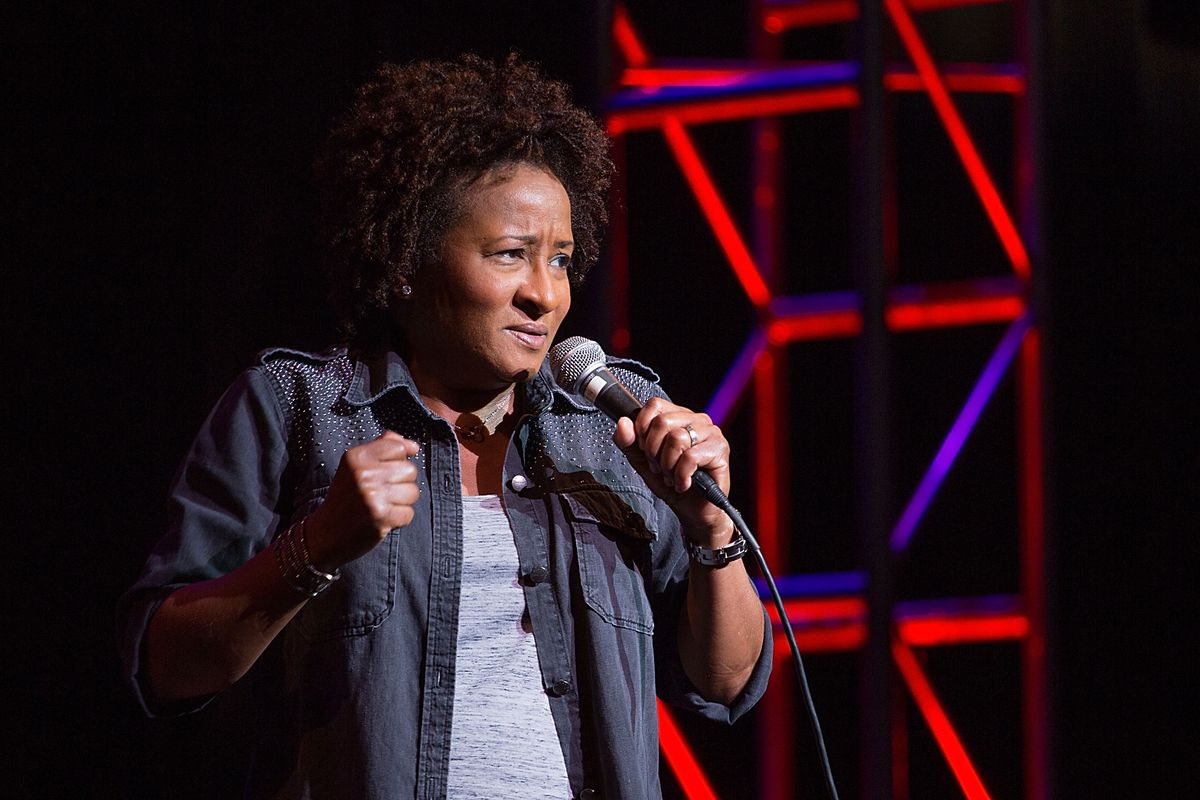 Queer women have been performing comedy for a long time, even if audiences haven’t always realized it. Saturday Night Live hires like Kate McKinnon (cast in 2012) and Punkie Johnson (cast in 2020) made headlines as the first openly lesbian and first openly Black lesbian cast members, respectively. Yet, many viewers might not realize that Denny Dillon and Danitra Vance, who were on SNL in the 1980s, were the earliest known queer women on the show. They and other queer women who have gone largely unrecognized helped pave the way for some of the most prolific comedians throughout history.

Jackie “Moms” Mabley, born Loretta Mary Aiken, started her comedy career playing vaudeville shows. She became a regular on the Chitlin’ Circuit, a series of venues throughout the United States where Black performers could book gigs during segregation, and was the first woman to have a solo comedy show at the Apollo, where she became a regular performer.

Mabley became most famous for her stage character “Moms,” an old woman who wore house dresses and liked young men, as evidenced by one of her signature lines: “Ain’t nothin’ an old man can do for me but bring me a message from a young man.” Offstage, Mabley dated women and wore silk shirts and suits like the one she sported in her first film role (1933’s The Emperor Jones). Although her relationships with women were not known to the public, they were no secret among people who knew Mabley personally.

Mabley enjoyed enormous success on the stage in the 1930s, ‘40s and ‘50s. During the 1960s, she also appeared on TV shows like The Smothers Brothers Comedy Hour and The Ed Sullivan Show and released numerous comedy albums.

Lily Tomlin began her comedy career in the 1960s, performing at clubs in New York City and on TV shows like The Garry Moore Show and Music Scene (on which she appeared with Moms Mabley). From 1969 to 1973, she gained national attention as a cast member on Rowan & Martin's Laugh-In, where she played characters like Edith Ann the little girl and Ernestine the telephone operator, becoming known for signature catchphrases like "And that's the truth" and "One ringy dingy, two ringy dingy."

Tomlin made her film debut in the 1975 movie Nashville, for which she earned an Academy Award nomination for best supporting actress. Since then, Tomlin has worked steadily in films, television and plays. The comedy series "Grace and Frankie" launched in 2015, teaming her up with Jane Fonda, one of her co-stars from the 1980 comedy 9 to 5.

Tomlin began dating her current wife and collaborator, Jane Wagner, in the 1970s. Although their relationship was not a secret among people who knew them, it didn’t garner much media attention until the 2000s. Tomlin and Wagner married each other in California in 2013, the year the state permanently legalized same-sex marriage.

Danitra Vance was the first Black woman hired to be a repertory player on "Saturday Night Live." In addition, she was the second queer woman to be a regular cast member, after Denny Dillon (who was on the show in 1980 and 1981), though this was not public knowledge when either Dillon or Vance was on "SNL."

Vance performed comedy with the famed Second City improvisational troupe in Chicago before moving to New York City and starring in the off-Broadway revue, "Danitra Vance and the Mell-o White Boys." In 1985, she joined the cast of "SNL" along with Terry Sweeney, the first openly gay male cast member. Although the show frequently cast Vance as a maid or prostitute, she was able to stand out with sketches like “That Black Girl,” a parody of the Marlo Thomas sitcom "That Girl."

After leaving "SNL" in 1986, Vance starred in the off-Broadway play "The Colored Museum" and won an Obie Award for her performance in "Spunk," an off-Broadway play adapted from stories by Zora Neale Hurston. Vance was diagnosed with breast cancer and had a radical mastectomy, an experience she used in her performance piece, “The Radical Girl’s Guide to Radical Mastectomy.” Unfortunately, her cancer returned and spread to other parts of her body, and she died in 1994 while still early in her career.

Comedian Paula Pell has performed in movies and TV shows, but is best known for her writing behind the camera. As a writer on "SNL" between 1995 to 2013, Pell helped create characters like Debbie Downer (played by Rachel Dratch) and the Spartan cheerleaders (played by Will Ferrell and Cheri Oteri). In 2006, she became the show’s first openly gay head writer.

Since then, Pell has continued to write for movies and TV shows but has also begun to work more in front of the camera. In the 2019 movie Wine Country, Pell drew on her own experiences to play a divorced lesbian trying to date again. Most recently, she stars as one of the members of a former ‘90s girl group in the TV comedy "Girls5eva."

Wanda Sykes started doing stand-up in 1987 and moved to New York City in 1992 to pursue a career in comedy. Starting with HBO's "The Chris Rock Show" in 1997, she has written for and performed in numerous movies, TV shows and stand-up specials. In 2009, she became the first Black woman and openly gay person to be the featured comedian at the White House Correspondents’ Dinner. In 2022, she co-hosted the Academy Awards.

Sykes married her wife, Alex Niedbalski, in California in 2008. Shortly after, Proposition 8 made same-sex marriage illegal again in the state. In the wake of the law’s passing, Sykes publicly came out as a lesbian at a rally supporting same-sex marriage.

Patti Harrison began her comedy career doing improv and stand-up. Over time, she honed a hilariously bizarre comedy style that gained her popularity on Twitter and YouTube, where she posted videos of herself “reviewing” exotic animals.

Starting in 2019, the transgender comedian gave standout performances on the show "Shrill" and the absurdist sketch comedy "I Think You Should Leave with Tim Robinson," and became a writer on the show "Big Mouth." In 2021, she was nominated for an Independent Spirit Award for best female lead in Together Together, the first feature movie in which she played a starring role.