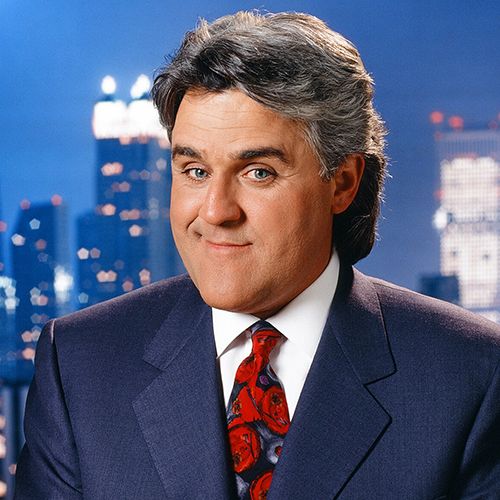 Who Is Jay Leno?

Beginning his stand-up career while in college, comedian Jay Leno moved to Los Angeles in the 1970s and wrote for television. He became a guest host of The Tonight Show in 1987 and took over as permanent host after Johnny Carson retired in 1992. Leno stepped down to launch a prime-time show in 2009 but soon returned to The Tonight Show for another four years. The comedian has hosted Jay Leno's Garage since 2015.

Leno was born James Douglas Muir Leno on April 28, 1950, in New Rochelle, New York, to Angelo Leno, an insurance salesman, and Cathryn Leno, a homemaker. He later moved to Andover, Massachusetts, where he spent the duration of his childhood.

As a student in grade school, Leno displayed his comic tendencies with pranks and practical jokes. His fifth-grade teacher's report card comments — "if Jay spent as much time studying as he does trying to be a comedian, he'd be a big star" — turned out to be prophetic.

Foray Into Stand-Up and TV Writing

Leno attended Emerson College in Boston, Massachusetts, and graduated in 1973 with a Bachelor of Arts degree in speech therapy. While in school, Leno performed stand-up comedy in local night clubs and emceed talent shows for extra money. Moving to Los Angeles after graduation, he wrote for the television show Good Times alongside fellow future late-nighter David Letterman. Leno also worked as the warm-up act for Johnny Mathis and Tom Jones.

Leno made his first appearance on The Tonight Show in 1977 and became a regular on the variety show The Marilyn McCoo and Billy Davis Jr. Show. In the mid-1980s, Leno hosted his first comedy special on TV, Jay Leno and the American Dream. Around this same period, he made numerous successful appearances on late-night TV, particularly on Late Night with David Letterman. In 1987, he signed a deal with NBC that made him one of two permanent guest hosts of The Tonight Show, a position he soon claimed solely for himself.

Leno forged a reputation as of the busiest performers in comedy; for years he booked more than 300 appearances annually. He also became famous for his clean, observational brand of humor and a cartoon-like facial features, which he made reference to in the title of his 1996 autobiography, Leading With My Chin.

In 1992, Johnny Carson surprised many by retiring from his long-standing role as America's beloved and premier talk show host. There had been speculation that Letterman, whose Late Night show followed Carson's, would take over hosting duties, a position he had publicly coveted. However, NBC instead picked the clean-cut Leno, considered a safer, more middle-America-friendly choice.

Initially, the transfer of hosting duties to Leno did not go smoothly. There was a well-documented falling out between Leno and his longtime manager, Helen Kushnick, who had assumed executive-producing duties for the show. In what had become a cutthroat environment in the late-night talk show world, Kushnick reportedly threatened potential guests not to appear on other talk shows if they wanted to be on The Tonight Show.

Kushnick was eventually fired, and the show gained momentum and a growing audience. In 1993, Leno's contract was extended by five years, at $40 million, and two years later, Leno won an Emmy Award for his performance as The Tonight Show host. In 1998, his show was renewed again for another five years, this time at $100 million.

In 2003, Leno announced that he planned to leave NBC by 2010. Conan O'Brien of Late Night with Conan O'Brien was soon named Leno's heir apparent on The Tonight Show. In December 2008, shortly before Leno's contract was set to expire, the network announced that his upcoming show would air in a prime-time slot. The new program, The Jay Leno Show, debuted in September 2009.

Unfortunately, Leno's new show, which aired at 10 p.m., failed to attract much of an audience. The ratings for The Tonight Show also declined after O'Brien took over as host. NBC planned to move Leno's program to late-night, subsequently pushing O'Brien's Tonight Show to after midnight. When O'Brien refused to accept the scheduling change, the network eventually decided to put Leno back behind the desk at The Tonight Show.

Return to 'The Tonight Show'

Leno returned to late-night in March 2010. O'Brien went on to launch a competing show, Conan, for TBS.

In August 2012, Leno made headlines for taking a pay cut. He reportedly decided to reduce his salary in an effort to save the jobs of some of his Tonight Show staffers. NBC had eliminated 20 jobs as part of a cost-cutting effort. Around the same time, rival network ABC announced that it would move Jimmy Kimmel Live! to an earlier time slot to compete against The Tonight Show.

In April 2013, Leno announced his plans to exit The Tonight Show at the conclusion of his contract the following year. He hosted his last Tonight Show on February 6, 2014, which featured guests Billy Crystal and Garth Brooks as well as surprise appearances by Oprah Winfrey, Carol Burnett, Jack Black and Kim Kardashian, among others.

In a statement released by NBC, Leno wished appointed successor Jimmy Fallon well. "Congratulations, Jimmy. I hope you're as lucky as me and hold on to the job until you're the old guy."

After leaving The Tonight Show, Leno returning to touring as a stand-up comedian and performing at various charity events. He soon began hosting Jay Leno's Garage, a web series inspired by his love of cars and motorcycles on NBC.com, which became a TV series on CNBC in 2015.

That year the comic also joined the Tim Allen sitcom Last Man Standing in a recurring role. He went on to appear on the celebrity competition series Lip Sync Battle and serve as a guest judge on America's Got Talent.

Leno has been married to wife Mavis Nicholson since 1980. They live in Los Angeles, where he spends his spare time working on his collection of classic cars and motorcycles.

Leno was honored with a star on the Hollywood Walk of Fame in 2000. In 2014, he was inducted into the Television Hall of Fame and awarded the Kennedy Center Mark Twain Prize for American Humor.