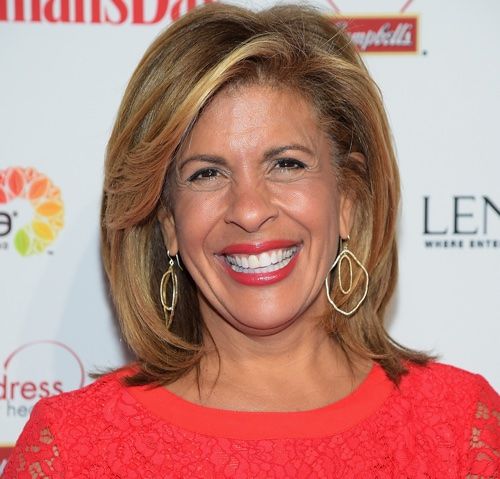 Who Is Hoda Kotb?

Born in Oklahoma in 1964 to Egyptian parents, Hoda Kotb began her broadcasting career as a news assistant in 1986. She became a correspondent for Dateline NBC in 1998, carving out a strong reputation for her journalistic work, before earning a fan base for her lively personality as co-host of Today's 10 a.m. time slot. Taking over the higher-profile 7 and 8 a.m. hours after Matt Lauer was fired in November 2017, Kotb was formally named co-host of the show's opening hours, with Savannah Guthrie, in January 2018, marking the first time two female hosts were paired together in Today's history.

On January 2, 2018, Hoda Kotb began the New Year with the announcement that she was officially taking over as co-host of the 7 and 8 a.m hours of NBC’s daily morning talk show Today, alongside Savannah Guthrie.

Kotb, the longtime co-host of Today’s 10 a.m. hour, had served as interim host of the opening hours since late November 2017, when previous anchor Matt Lauer was fired for inappropriate workplace behavior. Her pairing with Guthrie had proved a winning combination, as Today surpassed the ratings of the rival ABC program Good Morning America for four consecutive weeks, prompting Today execs to make the move permanent.

Prior to her ascension to the high-profile opening hours of Today, Kotb had been a valued member of NBC for nearly 20 years. She joined the network in 1998 as a correspondent for the newsmagazine Dateline NBC, and went on to cover some of the most important domestic and international events of the time, including the 2004 tsunami in Southeast Asia, the aftermath of Hurricane Katrina in 2005 and ongoing conflicts in Iraq and Afghanistan. She also conducted exclusive interviews with notable figures such as Burmese leader Aung San Suu Kyi, and hosted the weekly syndicated series Your Total Health from 2004 to 2008.

Kotb began hosting the 10 a.m. hour of Today in September 2007, and the following spring was paired with veteran morning talk show host Kathie Lee Gifford in the slot. The two demonstrated an easy rapport as they sipped wine and riffed on issues of the day, sharing an Emmy win with the rest of the Today team in 2010. After Gifford left Today in April 2019, Kotb was joined by Jenna Bush Hager for the show's fourth hour.

Kotb also substituted for both Guthrie and Lauer on Today and stepped in for various network-related specials, including coverage of the opening ceremony of the 2016 Summer Olympics in Rio de Janeiro.

Hoda Kotb was born on August 9, 1964, in Norman, Oklahoma. The middle child of Egyptian immigrants who left Cairo to study at the University of Oklahoma, Kotb was raised in an English-speaking household, describing her assimilated parents as people who "wanted us to be red, white and blue." She spent her childhood in Morgantown, West Virginia, and Alexandria, Virginia, save for a year abroad in Nigeria and extended vacations with family in Egypt.

After attending Fort Hunt High School in Alexandria, Kotb stayed close to home to attend Virginia Tech. She became involved with the Delta Delta Delta sorority and WUVT, the student radio station, before earning her B.A. in broadcast journalism in 1986.

Kotb immediately embarked on her broadcasting career after college, joining CBS in 1986 as a news assistant in her parents' hometown of Cairo. After that, she moved on to stints for CBS and ABC affiliates in Illinois, Mississippi and Florida, before settling in as a reporter and anchor for WWL-TV in New Orleans, Louisiana, from 1992 to 1998.

Kotb was diagnosed with breast cancer in early 2007 after her gynecologist discovered lumps during a routine exam. Despite her years as host of Your Total Health, she had never undergone a mammogram.

Kotb opted to skip chemotherapy but underwent a mastectomy, a procedure that required an extensive mental and physical recuperation period. While keeping a journal of her recovery, she wrote the word "forward" at the end of each entry as a means of overcoming day-to-day difficulties and keeping faith in her progress.

After coming across a breast cancer walk in Central Park later that year, Kotb decided to go public with her story. Shortly after joining Today in 2007, she shared her experiences in an October episode as part of Breast Cancer Awareness Month.

Awards and Other Endeavors

In 2007, Kotb was part of the Dateline team honored with a prestigious Peabody Award for The Education of Ms. Groves, a documentary chronicling the challenges facing a first-year teacher at an urban middle school in Atlanta, Georgia. She is also a recipient of the Edward R. Murrow Award, the Alfred I. duPont-Columbia University Award and four Gracie Awards, and has been nominated for numerous Emmys.

Along with her celebrated broadcasting work, Kotb in 2010 published her memoir, Hoda: How I Survived War Zones, Bad Hair, Cancer, and Kathie Lee. She has since written two more books, Ten Years Later: Six People Who Faced Adversity and Transformed Their Lives (2013) and Where They Belong: The Best Decisions That People Almost Never Made (2016).

The TV personality has also pulled double duty as a radio host since launching The Hoda Show on SiriusXM in February 2015.

In 2005, Kotb married Burzis Kanga, the former tennis coach for the University of New Orleans, but they divorced two years later.

In 2013, the TV personality began dating financier Joel Schiffman. Unable to have children after her treatments for cancer, she adopted daughter Haley Joy in February 2017, introducing the 12-week-old to Today fans that Mother’s Day. In April 2019, Kotb adopted another girl, named Hope Catherine.