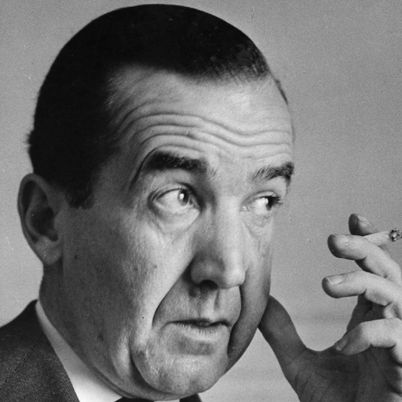 Who Was Edward R. Murrow?

In 1935, Edward R. Murrow became director of talks for CBS. He started news broadcasts in 1928 and continued throughout World War II. In 1951 he launched the television journalism program, See it Now, which created controversy with an exposé of Joesph McCarthy. Murrow left broadcasting in 1961.

Born Egbert Roscoe Murrow on April 25, 1908, in Polecat Creek (near Greensboro), North Carolina, Edward R. Murrow grew up in Washington state, and went on to become one of the most highly respected television and radio journalists of the 20th century. Murrow spent some of his summer breaks working on a surveying crew in the region.

At Washington State University, Murrow studied political science, speech and international relations. There, he also changed his first name to Edward. After graduating from the university in 1930, Murrow headed up the National Student Federation for two years. He changed jobs in 1930, going to work for the International Institute of Education. As an assistant director, he set up seminars and lectures here and abroad. The organization also helped bring Jewish academics from Germany to the United States.

In 1935, Murrow was hired by CBS to serve as its director of talks. He moved to London, England, two years later to become the head of its operations in Europe. Nearly by accident, Murrow began his career in journalism. Germany invaded Austria in 1938, and he charted a plane to Vienna, Austria, where he covered the event for CBS. He soon developed a network of correspondents to help him report on the growing conflict in Europe. His team, sometimes called "Murrow's boys," included William L. Shirer and Eric Sevareid.

Murrow became a fixture on American radio during World War II. During late 1939 to early 1940, he risked life and limb to report on the bombing of London. Murrow transmitted his reports from a rooftop instead of an underground shelter and was able to make the blitz real for listeners across the pond. As poet Archibald MacLeish said, according to The New Yorker, Murrow "burned the city of London in our houses and we felt the flames that burned it." He also was the first to incorporate ambient sound into his broadcasts, allowing listeners to hear the news happening.

Murrow's coverage of the war made him an American media hero. After the war, however, he struggled to find his footing. He served as a vice president of CBS, running its public affairs office for a time. Joining forces with Fred Friendly, in the late 1940s, Murrow began a series of recordings called Hear It Now, which would be later be adapted for an emerging medium called television.

Murrow's documentary news series, See It Now, debuted in 1951. The most famous installments of the show aired a few years later, and it best remembered for helping to stop the anticommunist persecutions led by Senator Joseph McCarthy. In 1953, Murrow told the story of a soldier who was removed from the military for being a security risk. He was deemed a risk because his father and his sister had leftist political leanings. After the story appeared on See It Now, the soldier was reinstated.

The following year, Murrow made history by taking on McCarthy directly. He did what many had been afraid to do. McCarthy and the House Un-American Activities Committee had created an environment of fear. Those who were considered to be communists often ended up being blacklisted and unable to find work. Much to the chagrin of his network, Murrow showed McCarthy for the bully that he was using McCarthy's own words.

Around this time, the hard-hitting Murrow showed a softer side with his interview show Person to Person. He met with such celebrities as Marilyn Monroe and talked with them in their homes. As the years progressed, Murrow found himself more and more at odds with his bosses at CBS. After See It Now was canceled in 1958, he launched a short-lived news discussion show Small World. He then continued to make a few documentaries for the network's CBS Reports program.

In 1961, Murrow left CBS to join the administration of President John F. Kennedy, where he served as director of the U.S. Information Agency until 1964. He was forced to resign because of ill health. A heavy smoker for much of his life, Murrow discovered that he had lung cancer.

As a leading light in the news business for nearly 25 years, Murrow received numerous honors. President Lyndon B. Johnson awarded him the Medal of Freedom in 1964. The following March, Queen Elizabeth II named Murrow an honorary knight commander of the Order of the British Empire. He died a short time later in Pawling, a town in Dutchess County, New York, on April 27, 1965. He was survived by his wife, Janet, and their son, Casey.

Today, Murrow's name is still synonymous with journalistic excellence. He continues to be regarded as a television news pioneer, influencing the likes of Walter Cronkite, Dan Rather and Peter Jennings. A new generation was introduced to his journalistic heroics with the release of the 2005 film Good Night, and Good Luck, directed by George Clooney. The film explores Murrow's efforts to end Senator McCarthy's reign of intimidation. David Strathairn plays Murrow in the film.