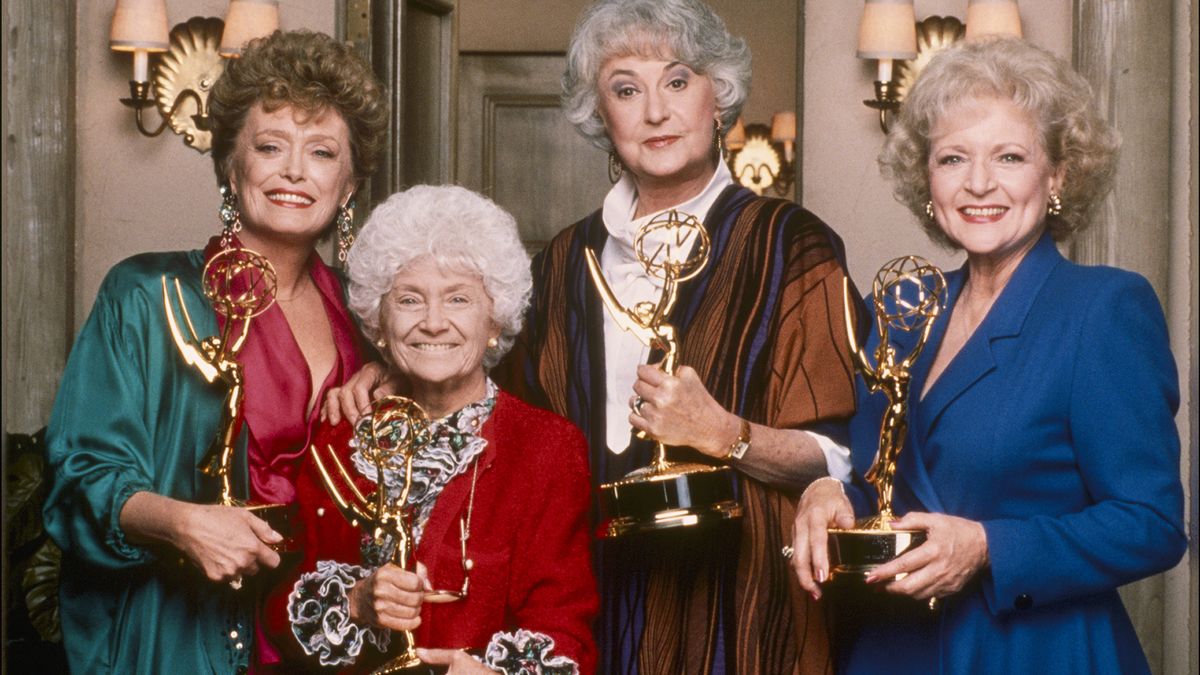 Premiering in 1985, The Golden Girls was an instant smash, attracting a diverse audience for a then-novel concept — depicting the lives of four older women sharing friendship, a home and a lot of cheesecake. In the decades since, the award-winning series starring Betty White, Bea Arthur, Rue McClanahan and Estelle Getty has found new generations of fans, thanks to frequent reruns and streaming platforms. Check out 10 facts you may not know about the golden girls and the actresses who so memorably played them:

The show began life as a sketch for an NBC presentation

In the fall of 1984, actresses Doris Roberts and Selma Diamond, who co-starred on the hit NBC shows Remington Steele and Night Court, made an appearance promoting NBC’s slate of programming for potential advertisers. The pair adlibbed a bit about the upcoming cop show Miami Vice, changing the concept to the idea of retirees playing cards together in a Florida retirement community in a show called, Miami Nice. When the spoof impressed the audience, it sparked the idea for a series with NBC execs, and in its early stages of development, it kept the Miami Nice working title before finally being changed to The Golden Girls.

Three of the actresses had worked together before the show

A decade before The Golden Girls premiered, Arthur starred in Maude, a spinoff from All in the Family, in which she played the anti-Archie Bunker, a politically liberal feminist. The show made headlines for its embrace of controversial topics, including an episode in which Maude has an abortion after discovering she is pregnant in her late 40s. McClanahan played Vivian, Maude’s best friend since college.

McClanahan and White appeared together on Mama’s Family, a series based on a recurring sketch on The Carol Burnett Show. McClanahan played the younger sister of star Vicki Lawrence, while White played her oldest child. When the series was originally canceled after its second season, both actresses were available to sign-up for The Golden Girls, so they didn’t return to Mama’s Family when it was picked up for new episodes in syndication. McClanahan’s character was killed off, and White later made one cameo appearance.

READ MORE: How Bea Arthur and Maude Changed the Way Women Were Portrayed on Television

Co-creator Susan Harris, who had worked with Arthur on Maude, wrote the pilot for the series with the idea of a “Bea Arthur” type for the role of recent-divorcee Dorothy Zbornak. The producers considered a number of other actresses first, including Lee Grant, who turned it down because she didn’t want to play someone who was old enough to be a grandmother. Stage and screen actress Elaine Stritch auditioned for the part but later admitted that she blew her audition by adlibbing an obscenity.

When the show’s creators pushed for Arthur to play the “Bea Arthur” character, both NBC and Arthur herself were reluctant. Arthur feared that because she, White and McClanahan were so closely identified with the earlier roles that audiences wouldn’t be able to see beyond that. Network execs worried that Arthur’s controversial Maude role would make her an unsympathetic star. McClanahan eventually convinced her reluctant former co-star, pointing out the originality and promise of the show’s premise, and network execs were won over.

It was the fear of typecasting that also impacted the roles of Rose Nylund and Blanche Deveraux. White was originally cast as man-hungry Blanche, a role very similar to the one she had played on The Mary Tyler Moore Show, while McClanahan was cast as naïve Rose. The pilot’s director came up with the idea of flip-flopping the casting. In a 2006 interview with the Paley Center, White admitted that McClanahan had done much more with the role of Blanche than she ever could have. 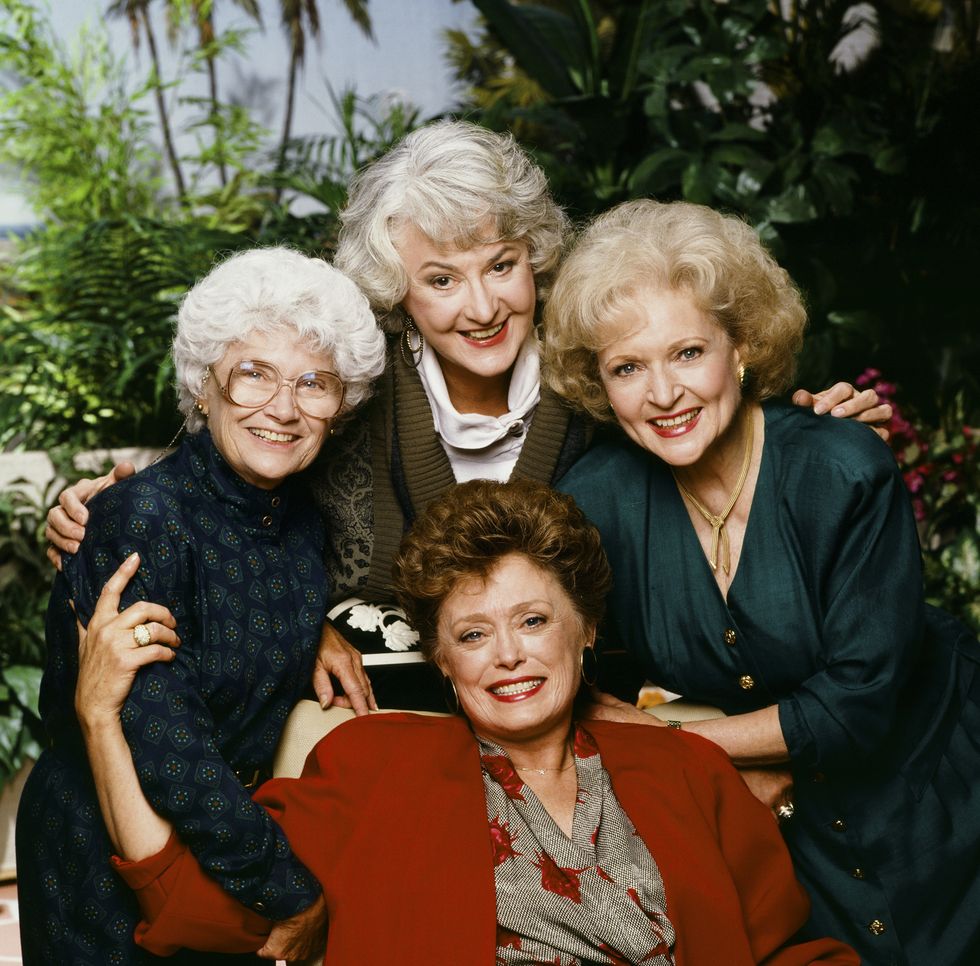 Sophia wasn’t supposed to be a regular on the show

The pilot episode featured a fourth character, a gay chef who worked for Blanche named Coco Levin. While the character scored well with test audiences, it was Dorothy’s mother, Sophia Petrillo, who stole the show. Sophia was originally intended to be a semi-recurring character, but producers were impressed enough with the dynamic between the four actresses, that they dropped Coco from the series.

Although Getty played the oldest of the women, she was actually a year younger than her on-screen daughter. According to a 1989 issue of Orange Coast Magazine, it took makeup artists three hours to transform Getty into her character — a job made even harder after Getty underwent a facelift in between seasons one and two.

The show featured some famous (and soon-to-be famous) faces

Over the course of its run, a number of well-known Hollywood actors appeared on the show, including Mickey Rooney, Rita Moreno, Jerry Orbach, Debbie Reynolds and more. Legendary comedian Bob Hope played himself in one episode, as did Jeopardy! host Alex Trebek. Burt Reynolds, Julio Iglesias and even Sonny Bono made appearances as themselves as romantic interests of the women.

George Clooney, who appeared on a number of classic '80s shows before he hit the big time on ER, appeared in one episode as a police officer. Clooney’s agent reportedly asked for the small role so that his client could continue to qualify for his actor’s union medical insurance. Future director Quentin Tarantino’s first paid acting gig was as an Elvis Presley impersonator at Sophia’s wedding. He later told Jimmy Fallon that the $3,000 he earned (including residuals for repeat airings) helped pay for preproduction costs for his first film, Reservoir Dogs.

Despite their on-screen camaraderie, the actresses were not as close in real life

McClanahan and White developed a bond during the series, passing the time on-set playing word games and creating riddles. But Arthur's relationship with White was much frostier. White chalked it up to their differing personalities, noting, “She was not that fond of me… She found me a pain in the neck sometimes. It was my positive attitude — and that made Bea mad sometimes. Sometimes if I was happy, she'd be furious!" And despite working together previously, McClanahan and Arthur weren’t very close during the series run, with McClanahan later referring to Arthur as “very, very eccentric.”

Jim Colucci, author of Golden Girls Forever: An Unauthorized Biography, believed the clash originated in part with the actresses conflicting acting styles, causing the more reserved, focused Arthur to become increasingly frustrated with White’s habit of joking with the audience between takes. Arthur’s son Matthew Saks described his mother as much more of a “loner” than her castmates, and as he told Closer Weekly, “My mom unknowingly carried the attitude that it was fun to have somebody to be angry at. It was almost like Betty became her nemesis, someone she could always roll her eyes about at work.”

The cast once performed for the British royal family

Queen Mother was such a fan of the show that she requested that they fly to London in November 1988 to perform as part of a royal variety show. Arthur noted at the time that they’d likely have to tone down the show’s racier language to suit the esteemed audience. During a 2015 AMA with Reddit, White recalled, ”It was very exciting. The Queen was lovely. We were told not to address her unless we were addressed. She was up in a box and she came down on stage after with Princess Anne.”

According to a book by British comedian Cleo Rocos, Princess Diana was also a fan, once spending an afternoon drinking champagne, watching reruns of the show and improvising new dialogue with Queen frontman Freddie Mercury.

While the show’s viewers adored Getty’s humorous takedowns, they didn’t realize how difficult filming was for the actress, who had far less experience than her costars. According to McClanahan, “She had an awful time remembering her lines because she would freeze and panic. The day before tape day, you could see a big difference in her. She’d be walking around like Pig-Pen under a black cloud. By tape day, she was unreachable.” White agreed, noting, “You thought, ‘She’s never going to be able to take a step on that stage.’”

The actress also had strict rules surrounding the subjects her character would talk about. Getty hated doing scenes regarding death and funerals, and as White noted, “Estelle Getty was so afraid of dying that the writers on The Golden Girls couldn't put a dead joke in the script.” Getty also refused to perform any scenes that contained what she considered unnecessary violence.

The show developed a loyal following within the LGBTQ community

Gay audiences embraced the show almost immediately, with several gay bars across the country holding viewing parties for fans. They were drawn to both the outsized female characters on the show and its willingness to tackle then-controversial subjects, including its depiction of LGBTQ issues. A number of gay characters appeared on the show, and it became one of the first series to tackle AIDS and HIV. For a 1990 episode in which Rose must wait for the results of an AIDS test following a blood transfusion during surgery, the show’s cast and crew wanted to ensure they treated the subject with sensitivity during a period when fear of the disease still ran rampant, and the episode writers consulted several HIV experts for advice.

All four of the actresses were early supporters of gay rights. Getty, whose nephew had HIV, reportedly set up gay crew members on dates and refused to read any lines that she considered harmful to the gay community. Arthur had a wide circle of gay friends thanks to her years in the theater community and performed benefits to raise funds for LGBTQ causes. When she died in 2009, she bequeathed $300,000 in her will to Ali Forney, an organization that provides housing and services for LGBTQ youth, and in 2017, a residence center bearing her name opened in New York City.

Despite the show’s popularity with both audiences and critics, by the beginning of season seven, Arthur was ready to walk away from the show, noting that she wanted to go out on top before the show ran out of steam. The May 1992 series finale, in which Dorothy gets married and Blanche sells the house, was watched by more than 27 million people.

But the characters briefly lived on. McClanahan, Getty and White starred in The Golden Palace, in which Blanche, Sophia and Rose buy a Miami hotel. Arthur made one appearance on the show, which also co-starred Don Cheadle and Cheech Marin, but it was canceled after one season. All four actresses also made appearances on Empty Nest, a spin-off starring Richard Mulligan as their doctor neighbor, which premiered before The Golden Girls completed its run and produced a spin-off of its own, Nurses.