Since the Super Bowl’s inception in 1960, the championship football game has always included a halftime show, but it took the NFL several decades to find the winning formula for it to become the annual spectacle it is today. In the beginning, college marching bands were the stars of the show, joined over the years by such special guests as an Elvis impersonator, Disney characters and the Rockettes. It wasn’t until New Kids on the Block hit the stage in 1991 that the mid-game break began to resemble today’s concert-like experience that millions of Americans gather around their TVs to behold. After ratings fell the following year when a rival network ran counter-programming (a live edition of In Living Color, to be exact), the NFL knew it was time to really step up its game.

Thus began the modern tradition of the hottest superstar performers filling one of entertainment’s most coveted 12-minute TV time slots, sometimes garnering more attention than the game itself. Here are 9 of the most memorable Super Bowl performances: 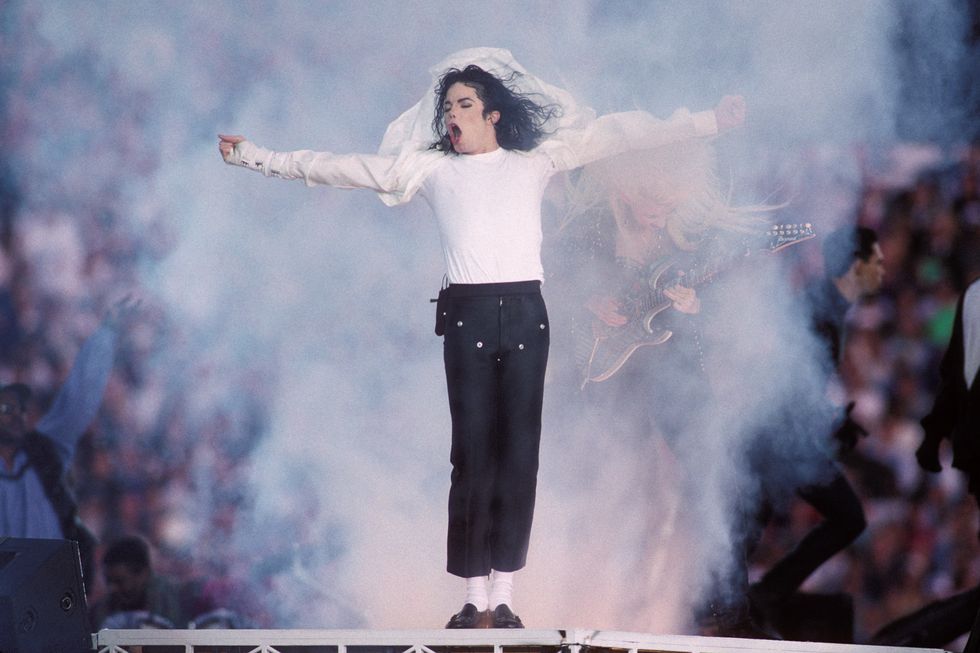 The late King of Pop solidified the show’s seismic shift, performing for an astounding 100 million viewers — a higher number than those who tuned in to watch the actual football game. After beginning his January 1993 set at Pasadena, California’s Rose Bowl with about two minutes of silence as the crowd roared, Michael Jackson launched into a game-changing medley of hits, including “Billie Jean” and “Black or White.” His set culminated with a children’s choir singing “We Are the World” before his big “Heal the World” finish. 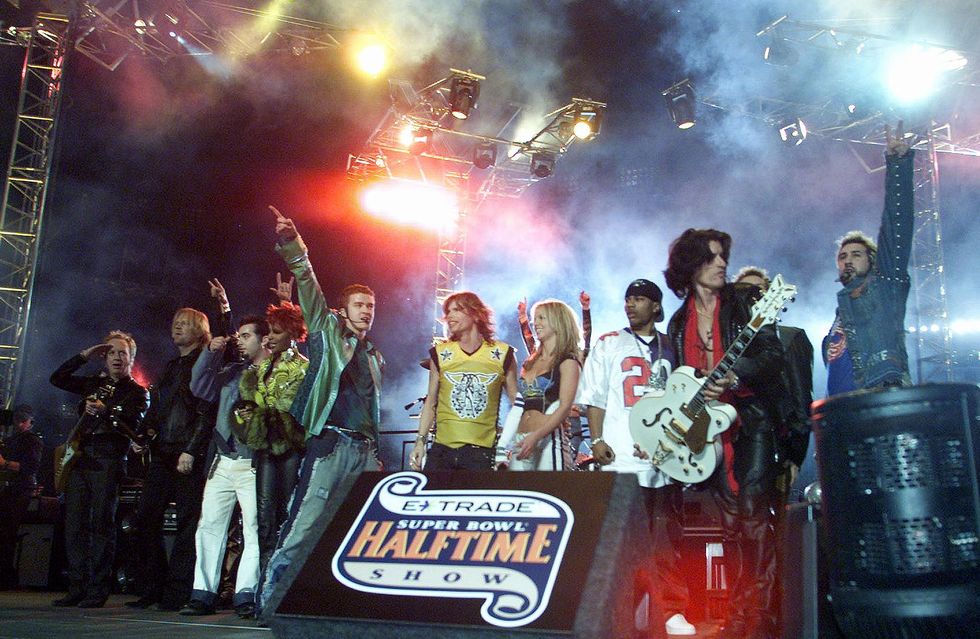 Aerosmith and Britney Spears (C-R) and *NSYNC performing during the halftime show at the Super Bowl XXXV; Photo: JEFF HAYNES/AFP via Getty Images

Appealing to fans across genres, the Super Bowl XXXV halftime show in Tampa, Florida, starred Aerosmith and *NSYNC. Following a pre-recorded intro that included Ben Stiller, Adam Sandler and Chris Rock, the bands took turns rocking the stadium with hits like *NSYNC’s “Bye Bye Bye” and “It’s Gonna Be Me” and Aerosmith’s “I Don’t Want to Miss a Thing” and “Jaded.” The grand finale: a peak early 2000s TRL-era rendition of “Walk This Way,” featuring surprise special guests Britney Spears, Mary J. Blige and Nelly. This was the first year fans were allowed on the field, giving the feel of a traditional concert — though there was nothing traditional about fireworks literally shooting out of Justin Timberlake’s gloves.

READ MORE: Aerosmith, Run-DMC and the Story Behind Their Genre-Bending Hit "Walk This Way" 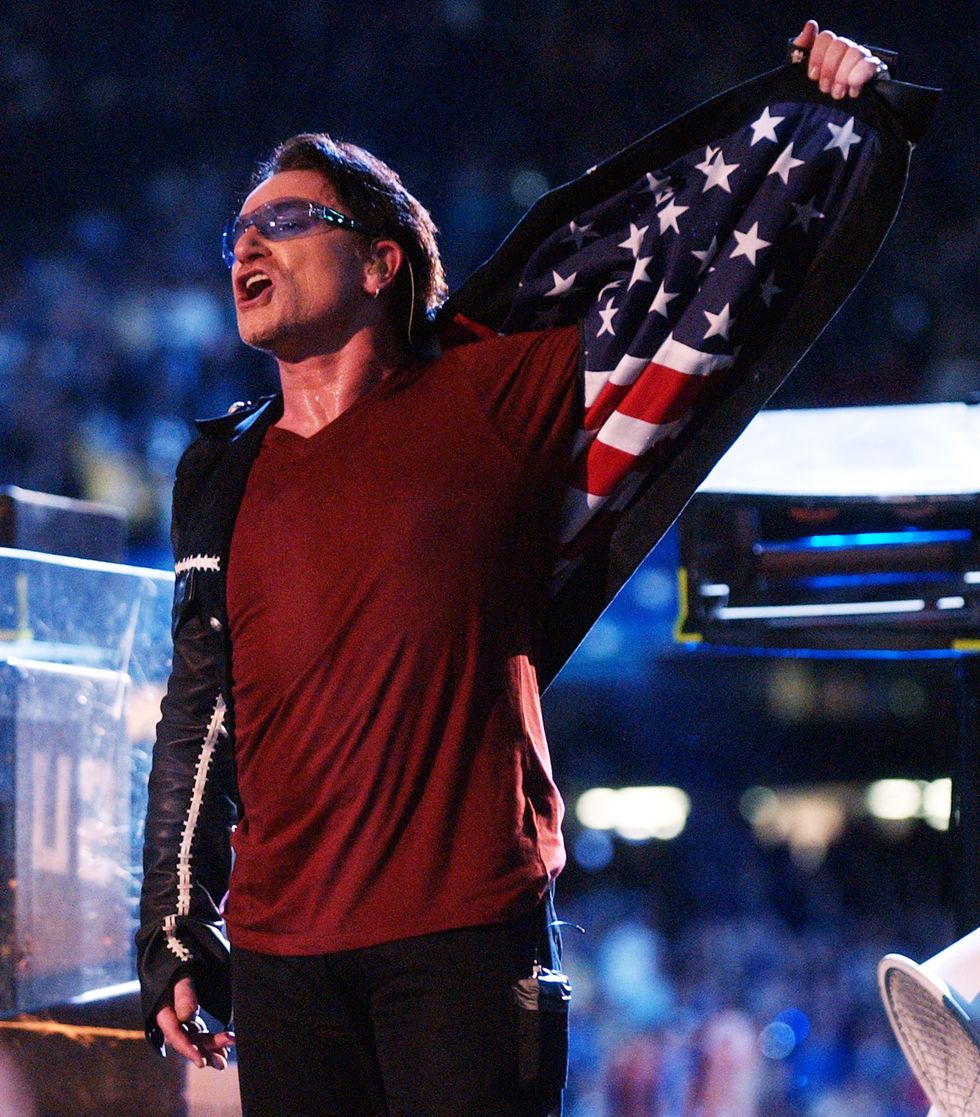 Bono, lead singer of U2, during the halftime show at Super Bowl XXXVI; Photo: KMazur/WireImage

For the first Super Bowl to take place following the September 11 attacks, the Irish rockers paid tribute to those killed during the horrific day in American history. Filling Louisiana’s Superdome with such songs as "Beautiful Day,” "MLK" and "Where the Streets Have No Name," the band displayed a banner with the names of all the people who lost their lives, and Bono ended the set by proudly opening up his jacket to reveal an American flag.

Although the voter participation-themed show at Houston’s Reliant Stadium included appearances by Jessica Simpson, Diddy, Nelly and Kid Rock, 2004’s halftime show will forever be remembered as the one where Janet Jackson and Timberlake’s finale of “Rock Your Body” spawned the term “wardrobe malfunction.” Also known as “nipplegate,” the incident during which Timberlake ripped off a piece of Jackson’s bodice — while singing the line “gonna have you naked by the end of this song” — resulted in the Federal Communications Commission fining CBS $550,000. Although Jackson was essentially blacklisted from the Super Bowl afterward, Timberlake would return to headline his own solo set in 2018. 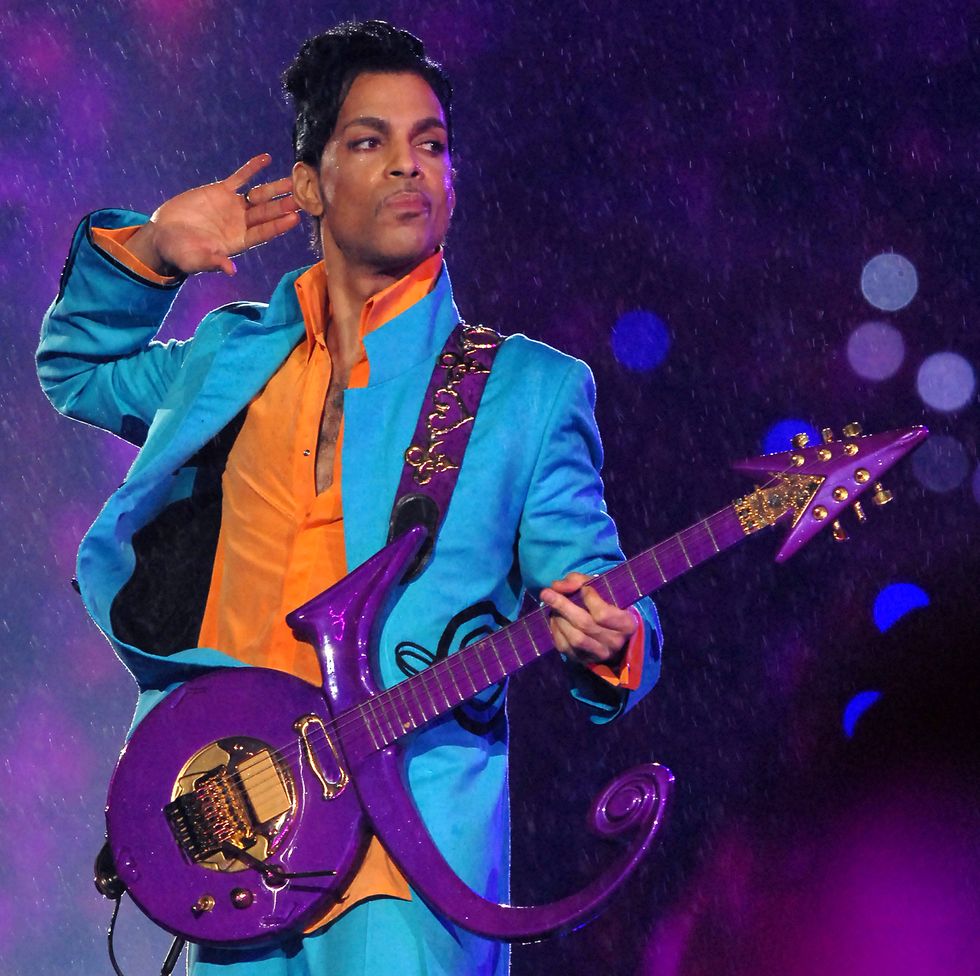 Widely regarded as one of the best halftime shows of all time, Prince’s performance included a mix of covers and original songs, including “We Will Rock You,” Baby I’m a Star” and “Proud Mary.” The cherry on top, however, couldn’t even have been scripted. Beginning by shredding a guitar solo with only his giant backlit silhouette visible, Prince launched into a rendition of “Purple Rain” — as actual rain poured down from the Miami sky above. 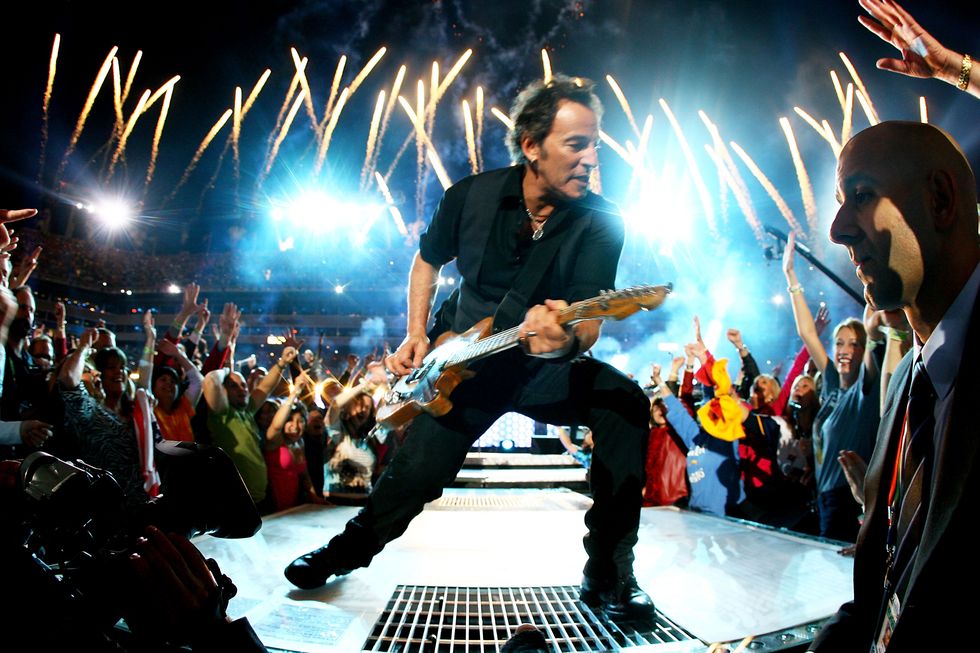 “For the next 12 minutes, we’re going to bring the righteous and mighty power of the E Street Band into your beautiful home,” Bruce Springsteen, who’d previously turned down the gig, announced to begin his set. “I want you to step back from the guacamole dip! I want you to put the chicken fingers down! And turn your television all the way up!” What followed was a collection of hits including "Born to Run" and "Glory Days." His viral moment: a power slide that sent his crotch straight into a camera.

READ MORE: How Bruce Springsteen’s Days at the Jersey Shore Inspired His Music 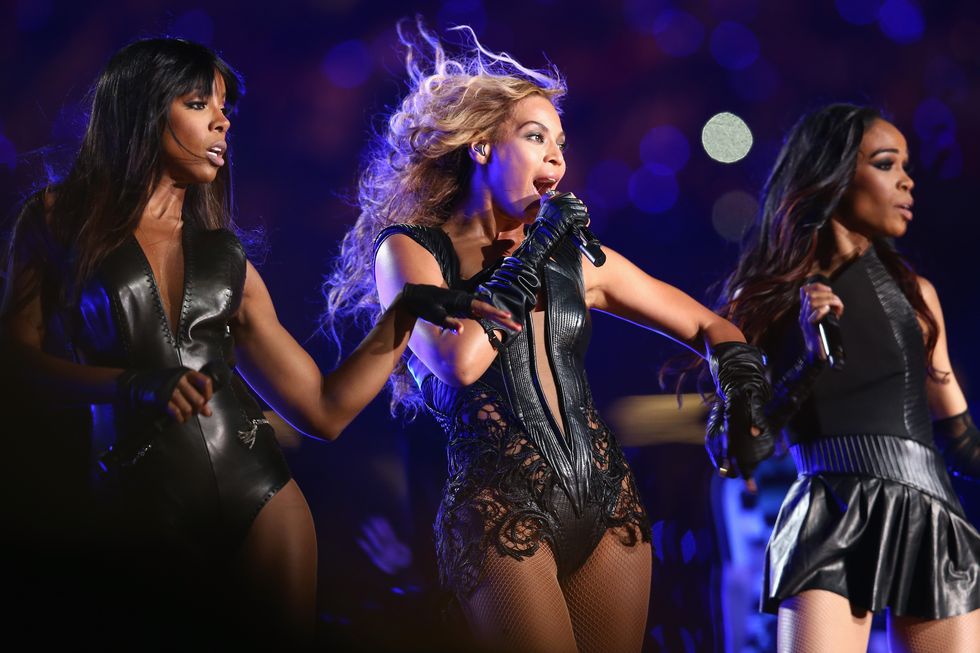 Fresh off her performance at President Barack Obama’s second inauguration, Beyoncé set the Super Bowl halftime show gold standard with a nine-song medley complete with a guitar shooting fireworks. She even threw in an epic Destiny’s Child reunion when former bandmates Kelly Rowland and Michelle Williams joined her for "Independent Women Part I" and "Single Ladies (Put a Ring on It)." After closing with “Halo,” she shut down New Orleans’ Mercedes-Benz Superdome — literally — when the lights went out in the stadium, delaying the second half of the game. (Officials insisted the two events were unrelated, however.)

READ MORE: How Beyoncé Made History With Her Coachella Performance 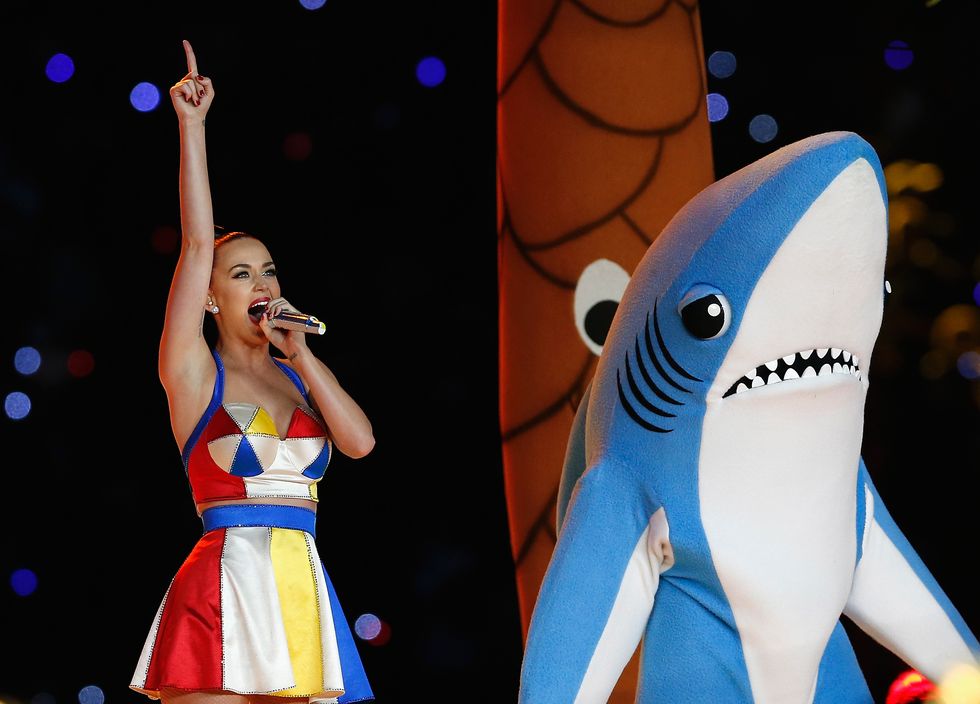 With an impressive 118.5 million viewers tuning in, Katy Perry set the record for the most-watched halftime show ever. After beginning her “Roar” performance atop a giant metallic lion, the pop star ran through a number of hits, from “I Kissed a Girl” to “Firework,” singing the latter on a shooting star that flew around Glendale Arizona’s University of Phoenix Stadium. Special guests Lenny Kravitz and Missy Elliott joined Perry at various points, but the instant viral star was the costumed “Left Shark,” whose seemingly random dance moves won over audiences. 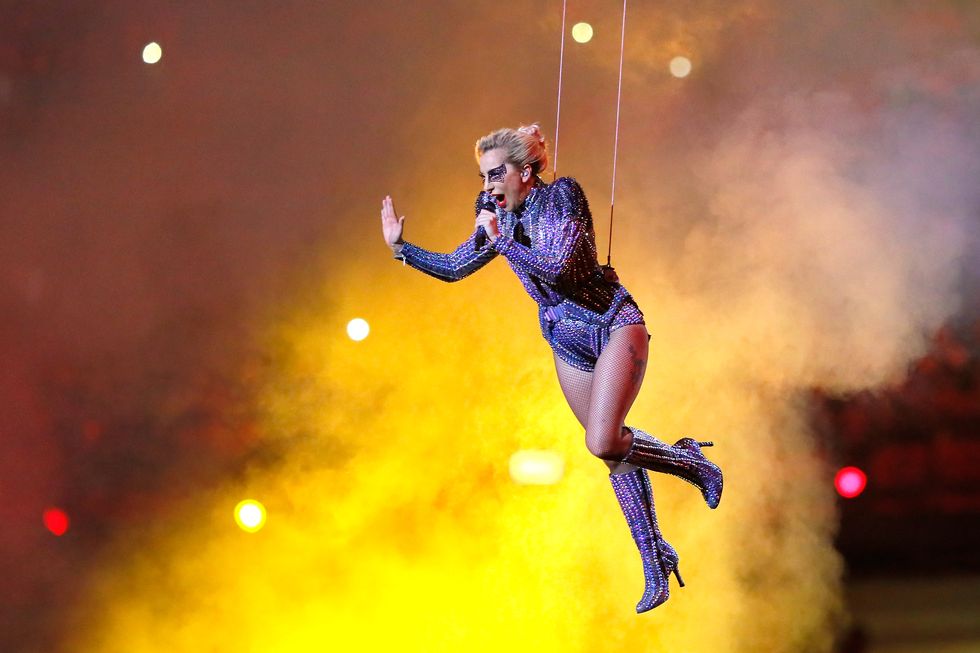 The 11-time Grammy winner started her high-energy set appearing to leap from the roof of Houston’s NRG Stadium — amid a sea of hundreds of aerial drones, creating a rippling American flag effect, no less — after a singing a pre-recorded “God Bless America'' and “This Land Is Your Land” medley. From there, Lady Gaga sang and danced her way through chart-topping tracks like “Poker Face,” “Just Dance” and “Bad Romance.” Gaga ended similarly to how she began, jumping off the rises and catching a football in midair. 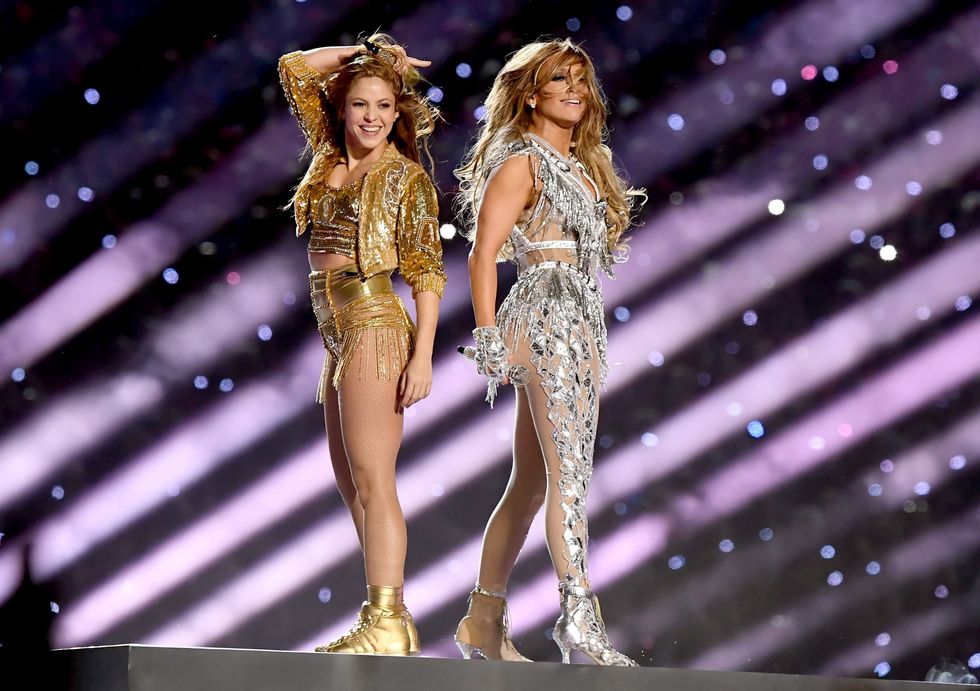 In celebration of Miami’s Latinx culture, Jennifer Lopez and Shakira shared top billing, with the latter performing first, singing everything from “Whenever, Wherever” to “Hips Don’t Lie.” She invited Bad Bunny to the stage for two songs, and also threw in the zaghrouta heard round the world. Afterward, Lopez — wearing a half American, half Puerto Rican flag cape — made a political statement, in part by including children in lit-up cages scattered around the field as she and her daughter Emme Muñiz sang “Born in the USA” and “Let’s Get Loud.” She also performed on a pole atop a replica of the Empire State Building before Shakira joined her for a joint finale of "Waka Waka (This Time for Africa).”