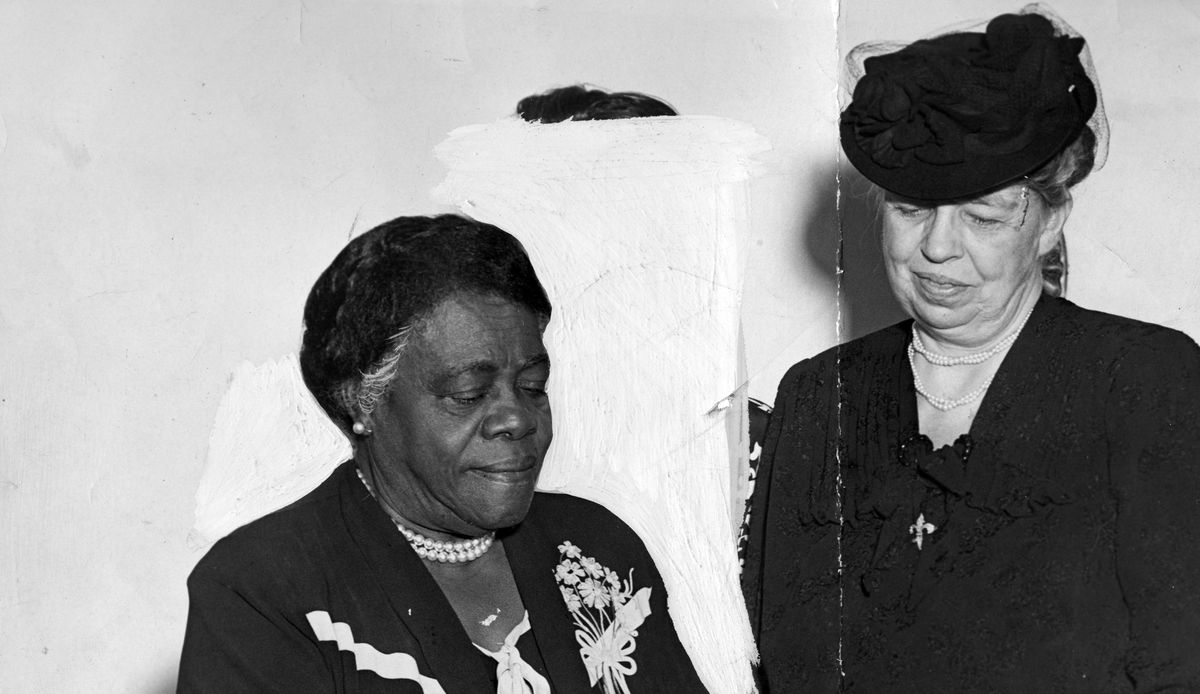 Bethune became a trusted advisor to both Roosevelt and her husband, President Franklin Delano Roosevelt, and played a key role in shaping government policies for Black Americans during the 1930s and '40s.

Born in South Carolina in 1875, Bethune was one of 17 children, and both her parents and most of her siblings had formerly been enslaved. The family struggled to get by, and Bethune picked cotton with her family to survive. When she was offered a spot in a local school opened by missionaries when she was 10, she jumped at the chance, becoming the first in her family to learn to read. She later won scholarships to study in North Carolina and Chicago, where she developed a lifelong passion for the uplifting possibilities of education, particularly for young Black girls.

Abandoning her original plan to become a missionary, she moved to Florida and founded the Daytona Educational and Industrial School for Negro Girls. The school was an immediate success, growing from five students to more than 250 in just two years. In 1923, it merged with a nearby school to become Bethune-Cookman College, a four-year, coeducational school. Despite repeated threats from the KKK and other racist groups, Bethune became active in local, state and national civil rights organizations, opening the first hospital for Black people in the Daytona region, which also trained nurses. In 1924, she became president of the National Association of Colored Women, the nation’s largest Black woman’s political organization.

Born into one of New York’s most distinguished families, and the favorite niece of future President Theodore Roosevelt, Roosevelt was orphaned at a young age, and it was only after a stint at a British finishing school that she began to shed some of the shy, self-doubting awkwardness of her early years. Discouraged by her family from going to college, Roosevelt briefly worked as a volunteer in New York’s Lower East Side, leading classes at settlement houses for the largely poor residents of the neighborhood.

In 1905, she married a distant cousin, Franklin. The couple had several children, but Roosevelt struggled with her new role as wife and mother. After learning of Franklin’s affair with her own social secretary, she increasingly turned her attention away from the private world of her family and toward public life. After FDR was stricken with polio in 1921, she became key to his continued political ascent, overcoming her shyness to forge relationships with top New York state power brokers. She also became active in organizations pushing for liberal reform, including women’s trade unions. While she still harbored some of the racial and social prejudices of others in her social class, her political beliefs were becoming increasingly progressive. 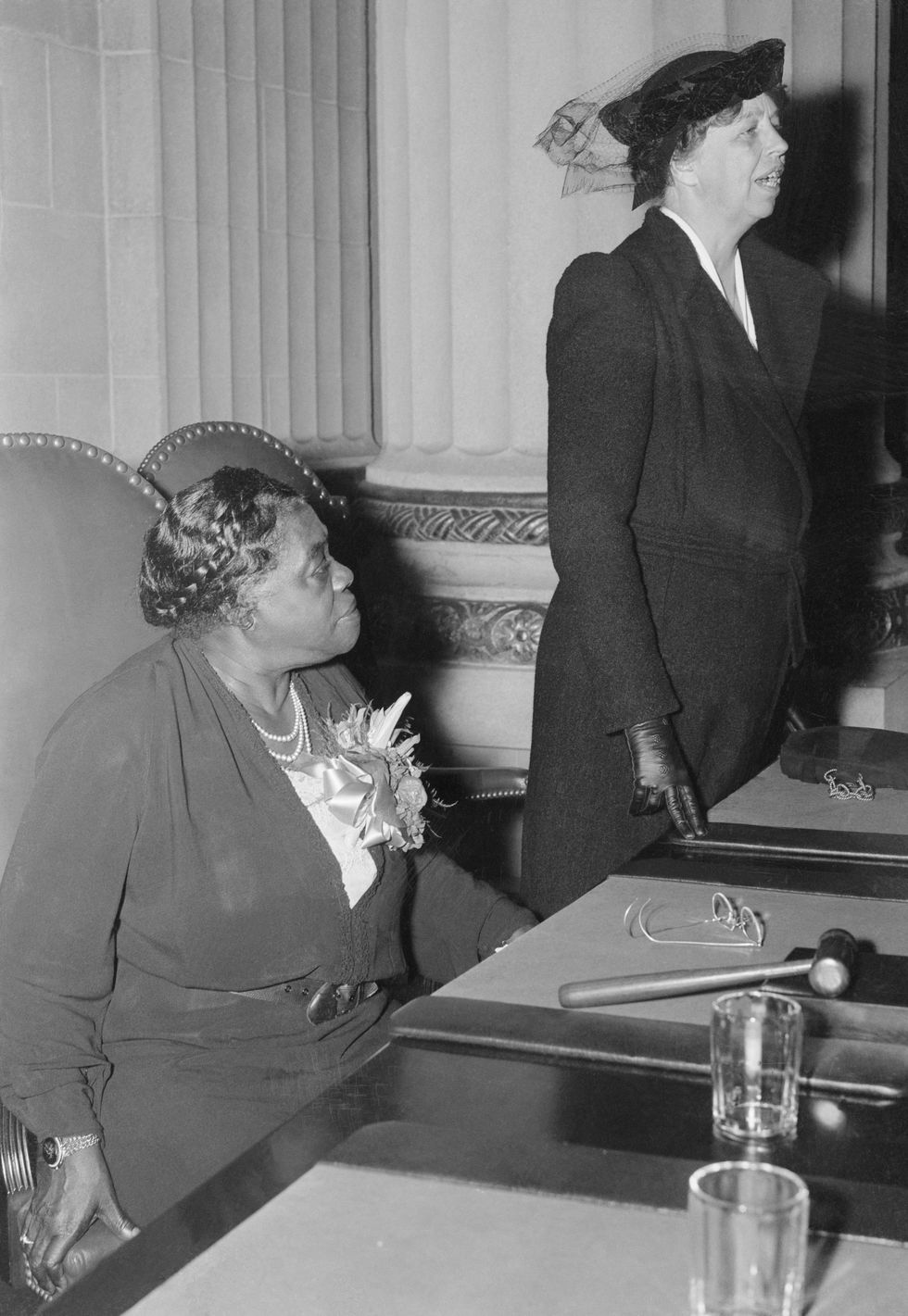 Bethune and Roosevelt first met in 1927, when Roosevelt invited Bethune to a meeting of the leaders of the nation’s most prominent women’s groups. Roosevelt was appalled when the all-white attendees refused to sit with Bethune, the sole Black guest. They forged a fast bond, informed in part by their mutual belief in the power of education (that same year, Roosevelt had co-founded a college prep school for girls where she remained a teacher until her husband became president). Bethune soon became a trusted advisor to Roosevelt, opening her eyes to the continued struggles of Black Americans.

Bethune, like many African Americans, was a vocal supporter of the Republican Party at the time, due in large part to the dominance of white, segregationist southerners within the Democratic Party and their support for Jim Crow policies. Bethune had been appointed the head of a commission on child welfare under Calvin Coolidge and Herbert Hoover, and, despite her friendship with Roosevelt, supported Hoover’s unsuccessful re-election bid in 1932 against FDR.

At the outset, few African American leaders held out much hope that Roosevelt could, or would, do much to alleviate the deep suffering of Black Americans during the depths of the Great Depression. But as FDR’s New Deal policies came into effect, they began to push to ensure that the progressive legislation would help all Americans, Black or white. The success of these new programs would play a large part in a political realignment that saw large numbers of Black Americans shift their support to the Democrats during the 1930s and 40s.

While Roosevelt did not appoint any Blacks to high-ranking positions within his administration, a number of Black people filled the ranks in lower posts, determined to champion the cause of political and economic equality, forming an unofficial “Black Cabinet” to influence Roosevelt on issues of importance to Black Americans. After serving as an advisor to FDR on minority issues, Bethune was formally brought into the administration to serve as the director of the Negro Division of the newly-created National Youth Administration, making Bethune the first African American to head a federal agency.

The NYA, which was tasked with developing employment and educational opportunities for young Americans, was a personal favorite of Roosevelt’s, who realized that Bethune was uniquely qualified to make the program a success. And Bethune did, creating jobs for hundreds of thousands of young Black Americans, and providing increased funding for Black higher education programs.

Both Bethune and Roosevelt continued to champion the cause of civil rights throughout FDR’s presidency. In 1939, when singer Marian Anderson was barred from performing at Washington’s Constitution Hall by the all-white Daughters of the American Revolution, Roosevelt resigned from the organization and helped arrange Anderson’s historic performance at the Lincoln Memorial. Despite criticisms, and even hate mail, especially from Southern white people, Roosevelt was determined that her friendship with Bethune be as public as possible, staying at Bethune’s home, raising funds for Bethune’s college and personally greeting her at the entrance to the White House during her visits, where the two women conspicuously walked arm-in-arm through the building.

When the United States entered World War II, Bethune successfully pushed Roosevelt to ensure that the newly-created Women’s Army Corps admitted Black women and helped select officer candidates for the group, and she and labor leader A. Philip Randolph lobbied Roosevelt to desegregate the defense industry and establish a federal fair employment commission designed to eliminate discriminatory hiring practices. Not all of her efforts were a success, however. When Congress was debating an anti-lynching law in 1940, Bethune personally appealed to FDR to throw his support behind the measure. Still fearful of the power Southern Democrats had on the party, FDR refused, and the bill went down to defeat.

Bethune and Roosevelt remained friends after her husband's presidency ended

After the NYA was disbanded in 1944, Bethune left government work, but continued her activism, remaining the head of the National Council of Negro Women until 1949 and serving as vice president of the NAACP from 1940 to 1955. When FDR died in 1945, Roosevelt gave Bethune, who had a fondness for stylish walking canes, one of his canes.

Later that year, the two were among the U.S. delegates (and Bethune, representing the NAACP, the only Black woman) to the San Francisco conference that gave birth to the United Nations, where both successfully lobbied for the creation of the landmark charter dedicated to human rights. When Bethune died in 1955, Roosevelt, who would champion the cause of civil rights until her own death in 1962, dedicated an issue of her popular syndicated column, “My Day,” to the remarkable life of her old friend, vowing to “cherish the spirit she lived by and try to promote the causes she believed in, in loving memory of a very wonderful life.”