On August 28, 1945, Jackie Robinson entered the office of the Brooklyn Dodgers to meet with team president Branch Rickey.

Keen to introduce the first Black player to Major League Baseball in more than 60 years, Rickey was looking for an individual with impeccable character traits to match his skills on the field. As such, his line of questioning was designed to determine whether the candidate had the makeup to handle this monumental task.

"Do you have a woman?" he asked Jackie, who responded in the affirmative. "Well," said Rickey, "you'll need her."

Indeed, Rachel Robinson would prove an invaluable component of what became known as Rickey's "noble experiment," her strength and support sustaining her husband through the herculean task of demonstrating, on a very public stage, that Blacks could be the equal of whites in a pre-civil rights America.

Their relationship began at UCLA and endured a wartime separation

Jackie and Rachel Isum met at UCLA following her arrival for the fall 1940 semester. Jackie was already the Big Man on Campus, star of the school's football, basketball, track and field and baseball teams, but he quickly fell for the charming nursing student.

As described in the Ken Burns documentary Jackie Robinson, Jackie felt at ease talking to Rachel and was impressed by the drive and determination behind her shy exterior. Rachel also realized her suitor's ambition and loved how he wore white shirts to emphasize his dark skin. "He was never, ever, ashamed of his color," she remembered.

The two were engaged in 1941, but their relationship was tested when Jackie received his draft notice and was assigned to Fort Riley, Kansas, the following spring. He sent her a box of chocolates every Friday, though a misunderstanding arose when he mistakenly thought she was also joining the Army, where she would be surrounded by other men, prompting her to return the engagement ring "so he wouldn't think he could tell me what to do."

After earning his honorable discharge in late 1944 (on the heels of being court-martialed for refusing to move to the back of a bus), Jackie played baseball in the Negro Leagues as Rachel worked toward completing her nursing degree. Although he enjoyed the camaraderie, Jackie felt the enterprise was disorganized and hated the indignities heaped upon him and his Black teammates as they traveled. As such he was ready to accept Rickey's challenge to integrate baseball, after first proving himself with the minor league team the Montreal Royals. 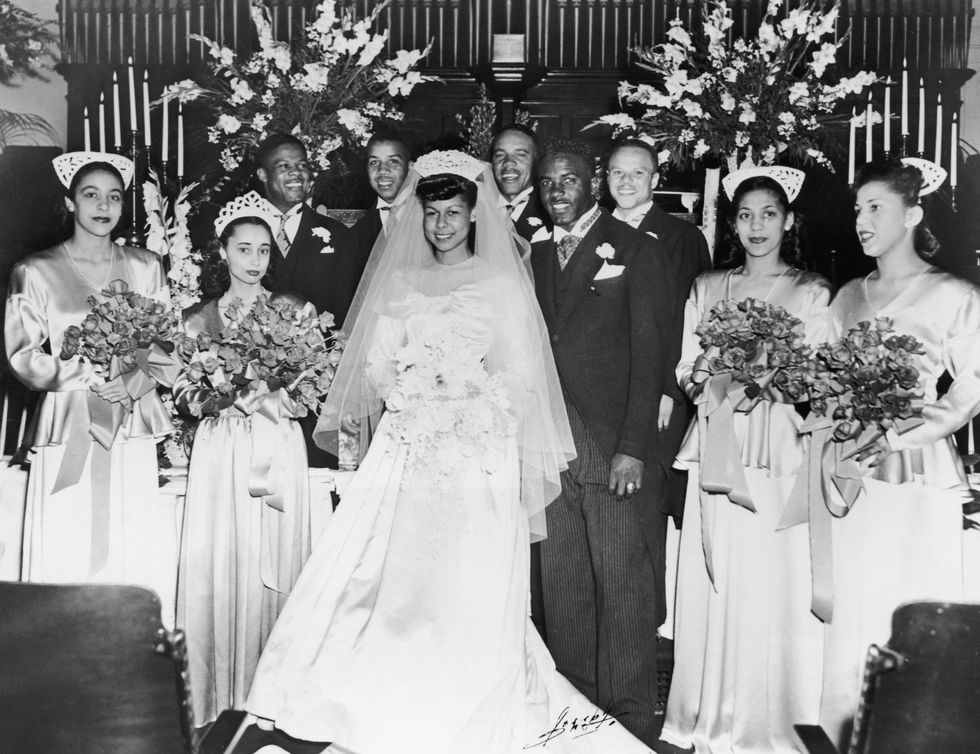 Rachel felt it was her duty to 'protect' Jackie

Two weeks after their marriage on February 10, 1946, Jackie and Rachel left Los Angeles for the Dodgers' spring training site in Daytona Beach, Florida. Rachel was the only wife invited to join the group of players.

Right away, the Robinsons got a taste of the difficulties to come when they were bumped from their flight during a stopover in New Orleans and again after landing in Pensacola, forcing them to board a bus to finish the 400-plus-mile journey across the Florida panhandle. As she remembered in Jackie Robinson: An Intimate Portrait, Rachel wept after her proud husband quietly acquiesced the orders to move to the back.

Things didn't get any easier after their late arrival to spring training. While the players practiced in nearby Sanford, Rickey learned of a possible threat to Jackie's safety, forcing him back to the more progressive Daytona Beach. One scheduled game in Deland was canceled because the stadium lights supposedly didn't work, even though it was daytime. Another in Sanford was halted in the third inning when the police chief threatened to arrest the Royals' manager if Jackie wasn't removed from the lineup.

Although he initially struggled under the pressure, Jackie improved as he drew strength from Rachel's presence. He thought of them as a team, as noted in Burns' documentary, using the term "we" even when referring to something he had done in a game.

Rachel, too, realized the importance of traversing the fire together. "From the moment we were bumped from the American Airlines flights, my role had begun to unfold," she wrote. "My most profound instinct as Jack's wife was to protect him – an impossible task. I could, however, be a consistent presence to witness and validate the realities, love him without reservation, share his thoughts and miseries, discover with him the humor in the ridiculous behavior against us, and, most of us, help maintain our fighting spirit."

The Robinsons found a warm welcome in Montreal

The next few months in Montreal delivered a respite between the tensions of spring training and drama still to come. Expecting to encounter difficulties with her housing search, Rachel instead was bowled over by the warm welcome offered by the woman who became their landlord and their neighbors. And while he faced plenty of hostility on road trips, Jackie was immensely popular with the hometown fans.

Later that year, while checking up on Jackie's progress, Dodgers executive Buzzie Bavasi sat in the stands for a Royals game, near the players' wives. Taking note of the magnetic Rachel, he reported to Rickey, "If Jackie was smart enough to pick her as his wife, he's the guy you want."

Jackie's play certainly warranted a promotion to the big club, as he led the International League with a .349 batting average. After the Royals won the Little World Series, Jackie was swamped by delirious Montreal fans. As journalist Sam Maltin famously noted, "It was probably the only day in history that a Black man ran from a white mob with love, instead of lynching on its mind."

Putting an exclamation point on a triumphant year, Rachel gave birth to Jackie Jr. that November.

The following spring, Rachel and the newborn joined Jackie in New York City ahead of his April 15 debut with the Dodgers. They briefly lived in the McAlpin Hotel amid Manhattan's busy Herald Square, often hosting reporters as drying diapers dangled throughout their cramped room, before finding a place in the Bedford-Stuyvesant part of town.

Again struggling with his massive burden, and fighting the instinct to retaliate, Jackie's Major League career got off to a quiet start. Along with enduring the taunts of rival players and fans, he wasn't exactly welcomed in his own clubhouse, as several teammates reportedly had signed a petition to force his ouster.

Rachel made sure to attend every home game, after which she and Jackie walked back together, reliving the highs and lows of the day, before putting it behind them as they entered the sanctuary of their home. Occasionally she joined the team for road trips, during which time, she wrote, she sat up very straight in the stands, "as if my back could absorb the nefarious outbursts and prevent them from reaching him."

Jackie eventually righted the ship amid the abuse, galvanizing fans with his exciting style of play and winning over the teammates who initially wanted nothing to do with him. After the Dodgers advanced to the 1947 World Series, he was named the National League Rookie of the Year and, underscoring how his achievements transcended the baseball field, finished second to Bing Crosby in a radio poll to determine the most popular person in America.

Two years after signing on for the noble experiment, Jackie and Rachel had weathered the harshest storm to prove the undertaking an unqualified success. Their shared battle against entrenched racism was hardly finished, but there was no closing that door that Jackie had emphatically kicked open.