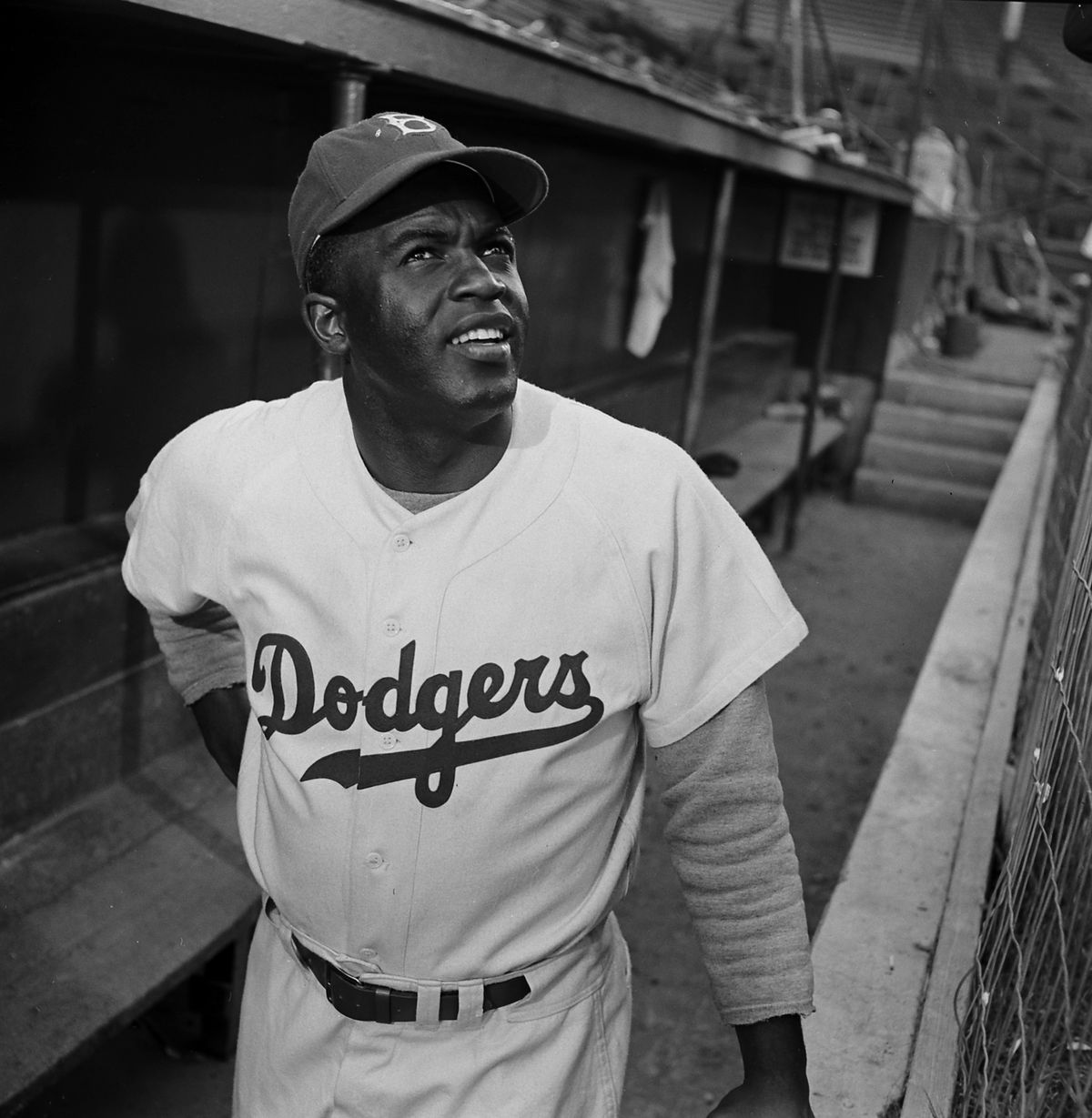 Who Was Jackie Robinson?

Robinson became the first Black athlete to play Major League Baseball in the 20th century when he took the field for the Brooklyn Dodgers in 1947. Throughout his decade-long career, Robinson distinguished himself as one of the game's most talented and exciting players, recording an impressive .311 career batting average. He was also a vocal civil rights activist.

Jack Roosevelt Robinson was born on January 31, 1919, in Cairo, Georgia. The youngest of five children, Robinson was raised in relative poverty by a single mother.

He attended John Muir High School in Pasadena, California, and Pasadena Junior College, where he was an excellent athlete and played four sports: football, basketball, track and baseball. He was named the region's Most Valuable Player in baseball in 1938.

Robinson's older brother, Matthew, inspired Robinson to pursue his talent and love of athletics. Matthew won a silver medal in the 200-meter dash — just behind Jesse Owens — at the 1936 Olympic Games in Berlin.

Robinson continued his education at UCLA where he became the university's first student to win varsity letters in four sports. In 1941, despite his athletic success, Robinson was forced to leave UCLA just shy of graduation due to financial hardship.

He moved to Honolulu, Hawaii, where he played football for the semi-professional Honolulu Bears. His season with the Bears was cut short when the United States entered into World War II.

From 1942 to 1944, Robinson served as a second lieutenant in the United States Army. However, he never saw combat.

During boot camp at Fort Hood, Texas, Robinson was arrested and court-martialed in 1944 for refusing to give up his seat and move to the back of a segregated bus. Robinson's excellent reputation, combined with the efforts of friends, the NAACP and various Black newspapers, shed public light on the injustice.

Ultimately he was acquitted of the charges and received an honorable discharge. His courage and moral objection to racial segregation were precursors to the impact Robinson would have in Major League Baseball.

In the early 1940s, Robinson met nurse-in-training Rachel Isum when they were both attending UCLA. The couple was married on February 10, 1946.

As Robinson made his career in the major leagues, the couple faced mounting racism, from insults to death threats. Later in life, both Jackie and Rachel became actively involved in the civil rights movement.

Jackie and Rachel had three children together: Jack, Sharon and David. Rachel said that she and Jackie went to great lengths to create a nurturing home that sheltered their kids from racism.

In 1971, the couple’s oldest child, Jack Robinson Jr., died at the age of 24 in a car accident. Their middle child, Sharon Robinson, is an author and consultant for Major League Baseball, while their youngest child, David Robinson, is a coffee farmer in Tanzania.

After his discharge from the Army in 1944, Robinson began to play baseball professionally. At the time, the sport was segregated, and African Americans and white people played in separate leagues.

Robinson began playing in the Negro Leagues, but he was soon chosen by Branch Rickey, president of the Brooklyn Dodgers, to help integrate Major League Baseball. He joined the all-white Montreal Royals, a farm team for the Brooklyn Dodgers, in 1946. Robinson later moved to Florida to begin spring training with the Royals.

Rickey knew there would be difficult times ahead for the young athlete, and so made Robinson promise to not fight back when confronted with racism. Rickey also personally tested Robinson's reactions to the racial slurs and insults he knew the player would endure.

From the beginning of his career with the Dodgers, Robinson's will was tested. Some of his new teammates objected to having an African American on their team. People in the crowds sometimes jeered Robinson, and he and his family received threats.

Despite the racial abuse, particularly at away games, Robinson had an outstanding start with the Royals, leading the International League with a .349 batting average and .985 fielding percentage. His successful year led to his promotion to join the Dodgers.

Robinson played his first game at Ebbets Field for the Brooklyn Dodgers on April 15, 1947, making history as the first Black athlete to play Major League Baseball in the 20th century.

The harassment continued, however, most notably by the Philadelphia Phillies and their manager, Ben Chapman. During one infamous game, Chapman and his team shouted derogatory terms at Robinson from their dugout.

Many players on opposing teams threatened not to play against the Dodgers. Even his own teammates threatened to sit out.

But Dodgers manager Leo Durocher informed them that he would sooner trade them than Robinson. His loyalty to the player set the tone for the rest of Robinson's career with the team.

In one incident, while fans harassed Robinson from the stands, Reese walked over and put his arm around his teammate, a gesture that has become legendary in baseball history.

Rookie of the Year

Robinson succeeded in putting the prejudice and racial strife aside and showed everyone what a talented player he was. In his first year, he batted .297 with 12 home runs and helped the Dodgers win the National League pennant.

Robinson soon became a hero of the sport, even among former critics, and was the subject of the popular song, "Did You See Jackie Robinson Hit That Ball?" His success in the major leagues opened the door for other African American players, such as Satchel Paige, Willie Mays, and Hank Aaron.

An exceptional base runner, Robinson stole home 19 times in his career, setting a league record. In 1955, he helped the Dodgers win the World Series. Before he retired, he became the highest-paid athlete in Dodgers' history.

Over the course of his career in Major League Baseball, from 1947 to 1956, Robinson achieved the following stats:

In his decade-long career with the Dodgers, Robinson and his team won the National League pennant several times. Finally, in 1955, he helped them achieve the ultimate victory: winning the World Series.

After failing before in four other series matchups, the Dodgers beat the New York Yankees. He helped the team win one more National League pennant the following season.

In December 1956, Robinson was traded to the New York Giants, but he never played a game for the team. He retired on January 5, 1957.

After baseball, Robinson became active in business and continued his work as an activist for social change. He worked as an executive for the Chock Full O' Nuts coffee company and restaurant chain and helped establish the African American-owned Freedom Bank.

In 1962, Robinson was the first African American to be inducted into the Baseball Hall of Fame. In honor of his legacy, in 1972 the Dodgers retired his jersey number of 42.

Robinson was a vocal champion for African American athletes, civil rights and other social and political causes, serving on the board of the NAACP until 1967. In July 1949, he testified about discrimination before the House Un-American Activities Committee.

In 1952, he publicly called out the New York Yankees as a racist organization for not having broken the color barrier five years after he began playing with the Dodgers. In his later years, Robinson continued to lobby for greater racial integration in sports.

Robinson died from heart problems and diabetes complications on October 24, 1972, in Stamford, Connecticut. He was 53 years old.

After Robinson’s death in 1972, his wife Rachel established the Jackie Robinson Foundation dedicated to honoring his life and work. The foundation helps young people in need by providing scholarships and mentoring programs.

First established in 2004, April 15 is known as Jackie Robinson Day in the MLB, honoring the day that he broke baseball's color barrier.

In 1978, a 10 square-block park in the Harlem neighborhood of New York City was christened Jackie Robinson Park to honor the baseball player.

In 1950, Robinson starred in The Jackie Robinson Story, a biographical movie directed by Alfred E. Green and co-starring Ruby Dee as Robinson's wife.

Robinson’s life was the subject of the acclaimed 2013 Brian Helgeland movie 42, which starred Chadwick Boseman as Robinson and Harrison Ford as Branch Rickey. In 2016, filmmaker Ken Burns premiered a documentary about the baseball legend on PBS.