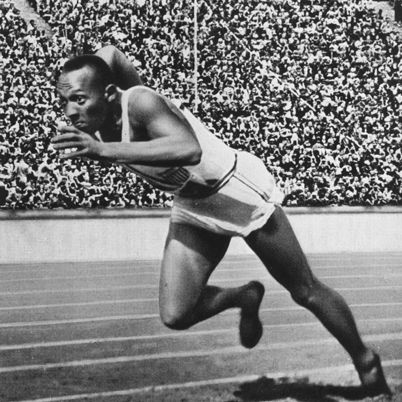 Who Was Jesse Owens?

Jesse Owens, also known as "The Buckeye Bullet," was an American track and field athlete who won four gold medals and broke two world records at the 1936 Olympic Games in Berlin.

Owens’ athletic career began in high school when he won three track and field events at the 1933 National Interscholastic Championships. Two years later, while competing for Ohio State University, he equaled one world record and broke three others before qualifying and competing in the 1936 Olympics.

Owens was born James Cleveland Owens on September 12, 1913, in Oakville, Alabama. The son of a sharecropper and the grandson of enslaved people, Owens was a frail child who was often sick from battles with chronic bronchial congestion and pneumonia.

Still, he was expected to work, and at the young age of seven he was picking up to 100 pounds of cotton a day to help his family put food on the table.

At the age of nine, Owens moved with his family to Cleveland, Ohio, where the young "J.C." discovered a world far different than the slower, Southern life he'd known. School proved to be one of the bigger changes. Gone was the one-room schoolhouse he'd attended in Alabama, replaced by a bigger setting with stricter teachers.

Here, Owens earned the nickname that would stick with him the rest of his life: One of his instructors, unable to decipher his thick southern accent, believed the young athlete said his name was "Jesse," when he, in fact, had said "J.C."

At East Technical High School, Owens quickly made a name for himself as a nationally recognized sprinter, setting records in the 100 and 200-yard dashes as well as the long jump. After graduating, Owens enrolled at Ohio State University, where he continued to flourish as an athlete.

At the 1935 Big Ten Championships, the "Buckeye Bullet," as he was also known, overcame a severe tailbone injury and tied a world record in the 100-yard dash—and set a long jump record of 26-8 ¼ that would stand for 25 years. Owens also set new world marks in the 220-yard dash and in the 220-yard low hurdles.

For Adolf Hitler and the Nazis, the 1936 Berlin Olympic Games were expected to be a German showcase and a statement for Aryan supremacy.

Hitler lambasted America for including Black athletes on its Olympic roster. But it was the African American participants who helped cement America's success at the Olympic Games.

In all, the United States won 11 gold medals, six of them by Black athletes. Owens was easily the most dominant athlete to compete. He captured four gold medals (the 100 meter, the long jump, the 200 meter and the 400-meter relay) and broke two Olympic records along the way.

Owens’ world record for the broad jump would last 25 years until being broken by Olympian Irvin Roberson in 1960. After Owens won the 100-meter event, a furious Hitler stormed out of the stadium, though some reports indicate that Hitler later congratulated the athlete on his success.

While Owens helped the United States triumph at the games, his return home was not met with the kind of fanfare one might expect. President Franklin D. Roosevelt failed to meet with Owens and congratulate him, as was typical for champions.

The athlete wouldn't be properly recognized until 1976 when President Gerald Ford awarded him the Presidential Medal of Freedom.

The mild-mannered Owens seemed not the least bit surprised by his home country's hypocrisy. "When I came back to my native country, after all the stories about Hitler, I couldn't ride in the front of the bus," he said. "I had to go to the back door. I couldn't live where I wanted. I wasn't invited to shake hands with Hitler, but I wasn't invited to the White House to shake hands with the president, either."

Following the 1936 Olympic Games, Owens retired from amateur athletics and started to earn money for his physical talents. He raced against cars and horses, and, for a time, played with the Harlem Globetrotters.

Owens eventually found his calling in public relations and marketing, setting up a business for himself in Chicago, Illinois, and traveling frequently around the country to speak at conventions and other business gatherings.

Owens died of lung cancer in Tucson, Arizona, on March 31, 1980. He smoked up to a pack of cigarettes a day for a good deal of his life.

The 2016 movie Race depicts Owens’ budding track and field stardom in college through his wins at the 1936 Olympic games in Berlin, where he defied Hitler’s vision of Aryan supremacy.

Made in consultation with Owens’ three daughters, the movie stars Stephan James as Owens and Jason Sudeikis as Larry Snyder, Owens’ coach at Ohio State University.

Owens was married for nearly 48 years to Ruth Owens. The longtime chairwoman of the Jesse Owens Foundation, an organization dedicated to supporting the development of young people,

Ruth died in 2001 of heart failure. The couple had three daughters together: Gloria, Beverly and Marlene.