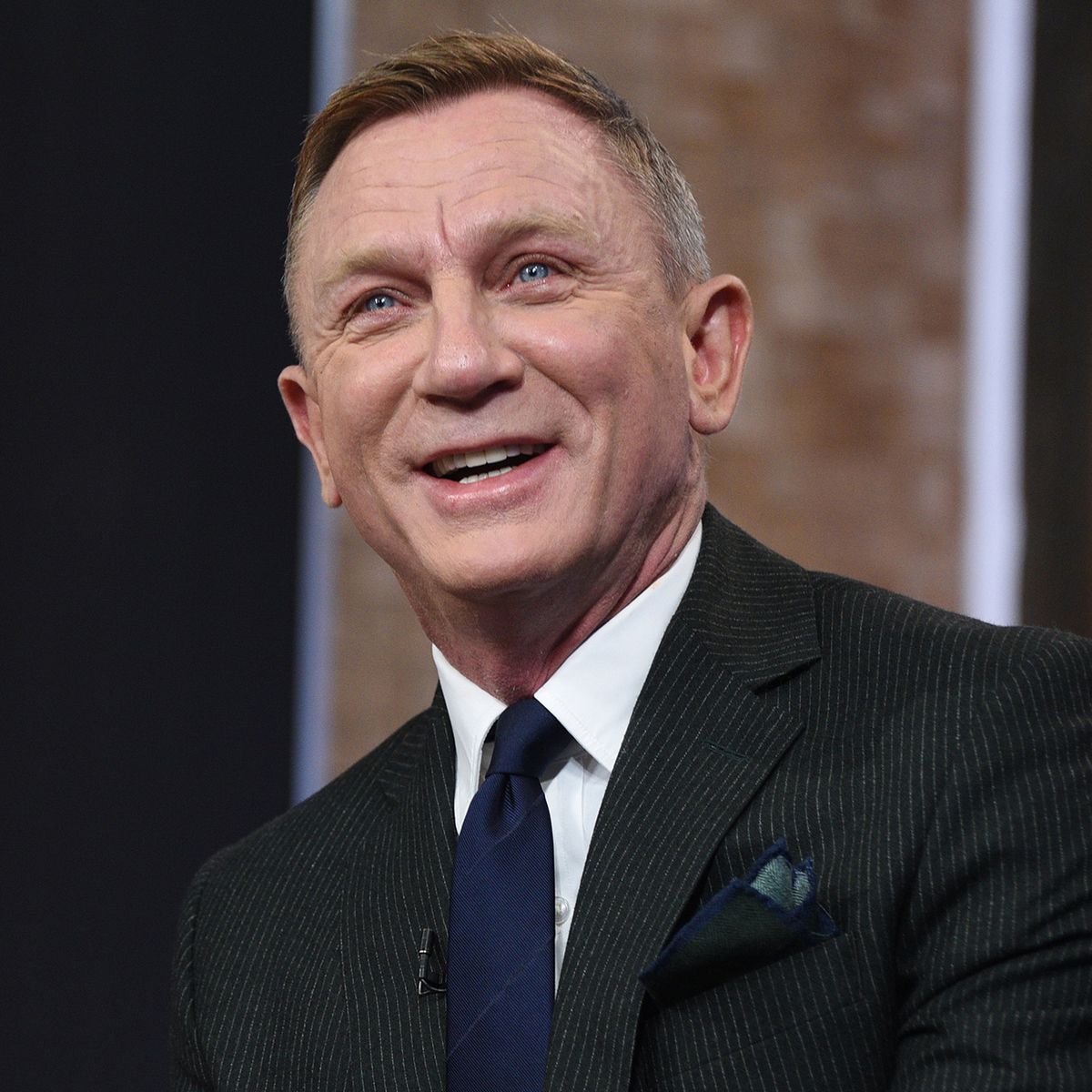 Who Is Daniel Craig?

Born in 1968 in Chester, England, Daniel Craig moved to London when he was 16 to join the National Youth Theatre. Following his big screen debut in The Power of One, the actor featured in the BAFTA-winning BBC miniseries Our Friends in the North and went on to roles in films like Lara Croft: Tomb Raider and Road to Perdition. Craig also worked with director Steven Spielberg on Munich and in 2006 was seen as James Bond in Casino Royale, reinvigorating the franchise. He returned as Bond for the blockbusters Quantum of Solace, Skyfall and Spectre, while starring in other major features like The Girl with the Dragon Tattoo and Logan Lucky.

Daniel Wroughton Craig was born on March 2, 1968, in Chester, England. Craig grew up near Liverpool, and enjoyed going to the theater with his mother and sisters. Many of his mother's friends were actors, and he felt drawn to the profession. "I kind of fell in love with the idea of acting ... I liked the idea of it—you know, shouting a lot and dressing up and all that," Craig told Interview magazine.

Craig moved to London when he was 16 to join the National Youth Theatre, and then studied at the Guildhall School of Music and Drama.

'The Power of One,' 'Our Friends in the North'

After graduating, Craig made his film debut in The Power of One (1992), a 1950s drama set in South Africa. His career then received a substantial boost with his role in the 1996 BBC miniseries Our Friends in the North. The serial drama enjoyed great critical reception and won several major awards in the year following its broadcast, including two British Academy Television Awards, two Royal Television Society Awards and four Broadcasting Press Guild Awards.

'Love Is the Devil,' 'Elizabeth'

Another important role came in 1998 with the film Love Is the Devil, a biopic about the artist Francis Bacon (played by Derek Jacobi). Craig co-starred as Bacon's lover George Dyer, a small-time thief. Craig later described the project as "the first film I did that 'made me.'" That same year, Craig had a small role in the historical drama Elizabeth, starring Cate Blanchett.

In 2001, Craig appeared as the romantic interest to Angelina Jolie's character in the action film Lara Croft: Tomb Raider, based on the popular video game. Although the film was panned by reviewers, it was a hit with viewers—Tomb Raider debuted at No.1 at the box office and became the highest-grossing video game adaptation to date.

Craig next gave an impressive performance in 2002's Road to Perdition, adapted from the popular graphic novel of the same name. Craig played Connor Rooney, the murderous son of a mob boss (Paul Newman). The actor's standout performance was lauded by critics and fans alike. He then demonstrated his range when he portrayed poet Ted Hughes in the drama Sylvia (2003), which also starred Gwyneth Paltrow. The film explored the life of Hughes' wife, poet Sylvia Plath, and the couple's troubled relationship.

Craig made his debut as a leading man in the 2005 crime drama Layer Cake, as an unnamed character—called XXXX in the credits—who seeks to retire from his criminal enterprise. That same year, the actor got a chance to work with famed director Steven Spielberg in the drama Munich (2005), playing an Israeli agent working on a team charged with tracking down those responsible for the massacre of Israeli athletes at the 1972 Olympic Games.

Around this time, rumors had begun to swirl about Craig becoming the next actor to play the role of legendary spy James Bond. Fans used to previous Bonds played by the likes of Sean Connery or Pierce Brosnan objected to potentially having Craig in the part, arguing that he was too blond or too old. And film critics believed that, for a serious stage-trained actor like Craig, playing Bond would be an ill-advised move. But the actor believed it was a great opportunity, agreeing to a five-film contract. "When I accepted the job to work on Bond, I genuinely did it to change my life. I knew that it would flip everything on its head. ... I've never made movies for money—I've always made them because I truly wanted to do them," he explained to Interview magazine.

Proving the skeptics wrong, Craig made Bond history with 2006's Casino Royale. He reinvigorated the long-running film franchise with his modern take on the super spy, described by one critic as "a noble thug." Casino Royale became the highest-grossing Bond film to date, earning almost $600 million worldwide. Craig returned as 007 in the next installment, 2008's Quantum of Solace, a hit that was more modest in terms of its critical reception and box-office performance.

But 2012 saw the return of Bond in a major way with Skyfall, a Sam Mendes-helmed enterprise co-starring Javier Bardem, Naomie Harris, Ben Whishaw, Ralph Fiennes and Judi Dench as M, a character who comes under intense intra-agency attack. The lauded project was a box-office phenomenon, making more than $1.1 billion internationally and setting earning records in various territories. The next Bond adventure, Spectre, again directed by Mendes and co-starring Christoph Waltz and Monica Bellucci, was released in autumn 2015. In the UK, Spectre set the record for being the country's highest grossing film within seven days of release; the previous record holder was Skyfall.

Following an extensive wait, with delays resulting from the departure of original director Danny Boyle and Craig's desire to be with his wife and newborn daughter, the 25th installment of the Bond franchise seemed to be inching closer to reality with the reveal of its title—No Time to Die—in August 2019. Along with the returning characters played by Harris, Whishaw and Fiennes, No Time to Die will feature Rami Malek, of Bohemian Rhapsody fame, as next to step up in the line of notorious Bond villains.

Roles Outside of Bond

'The Invasion,' 'The Golden Compass'

Craig continued pursuing other non-Bond film projects, including a co-starring role in the 2007 science-fiction thriller The Invasion, loosely based on the 1978 film Invasion of the Body Snatchers. In the film, Craig played a research scientist who helps psychiatrist Carrol Bennell (played by Nicole Kidman) unearth an alien conspiracy. Craig appeared with Kidman again in the 2007 fantasy film The Golden Compass.

'Flashbacks of a Fool,' 'Defiance'

In 2008, Craig starred in Flashbacks of a Fool, a small indie drama directed by friend Baillie Walsh, as a middle-aged actor at the decline of his career. That same year, he joined Liev Schrieber and Jamie Bell in the Holocaust-based Defiance, the three playing Jewish brothers who fight back against the Nazis.

Returning to the stage, Craig made his Broadway debut in 2009's A Steady Rain, alongside Hugh Jackman. He later joined his wife, Rachel Weisz, for a 2013 adaptation of Harold Pinter's Betrayal, before earning praise in 2016 for his portrayal of the villainous Iago in a contemporary setting of Othello.

'The Girl with the Dragon Tatoo,' 'The Adventures of Tintin,' 'Cowboys & Aliens'

Back on the big screen, Craig stared with Rooney Mara in 2011's The Girl with the Dragon Tattoo, a David Fincher adaptation of the Swedish film based on Stieg Larsson's bestselling novel. That same year, Craig lent his voice to Spielberg's The Adventures of Tintin, based on the popular comic books, and also starred in Cowboys & Aliens as well as Dream House.

In 2017, Craig surfaced in the thriller Logan Lucky, as safecracker Joe Bang, and co-starred with Halle Berry in Kings, a drama set around the time of the 1992 L.A. riots. Two years later, as his tenure as Bond neared its conclusion, the actor seized the opportunity to showcase a thick Southern accent and his comedic chops in the Rian Johnson whodunit Knives Out.

Once romantically linked to actress Sienna Miller and model Kate Moss, Craig dated producer Satsuki Mitchell for several years. He has a daughter, Ella, from his two-year marriage to Fiona Loudon. In December 2010, Craig began dating Weisz, his costar in Dream House. The couple married in June 2011 in New York, and later welcomed a daughter in September 2018.