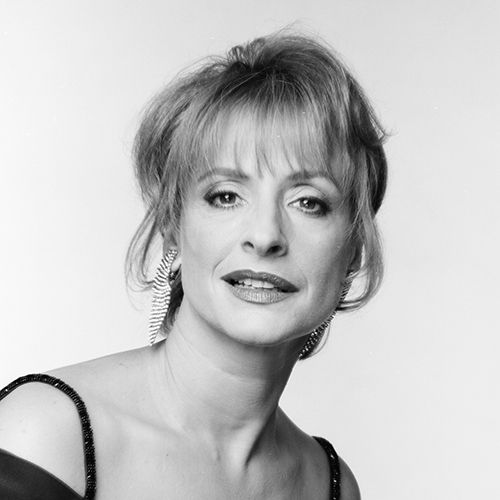 Who Is Patti LuPone?

With Tony Awards for Evita and Gypsy, and five additional nominations for Broadway musicals, she is the very definition of a Broadway diva. “The word ‘diva‘ to me means doing something supernatural with something natural,” she has said. And: “Critics and producers think audiences want actors that only present the silhouette and hit the points in the silhouette. What I do is too dangerous.”

The Long Island (New York) native was in the first graduating class of the famed Julliard School’s Drama Division in 1972. Upon graduation, she joined The Acting Company, a national touring repertory troupe founded that year by actor and producer John Houseman. She spent four years with the company, and (along with fellow graduates Kevin Kline and David Ogden Stiers) made her Broadway debut in its production of Chekhov’s Three Sisters in 1973. LuPone has a long association with playwright David Mamet, beginning with his play The Woods (1977), staged in Chicago, and, more recently, the Broadway production of The Anarchist (2012), opposite Debra Winger.

LuPone's musicals are what brought critics and audiences to their feet, beginning with the comic folk tale The Robber Bridegroom (1975), for which she received her first Tony Award nomination. Her impassioned performance as Eva Peron in Andrew Lloyd Webber’s hit Evita (1979) catapulted her to stardom, and gave LuPone her signature standard, “Don’t Cry For Me Argentina.”

She won her first Tony for the show, but likened her backstage battles to “Beirut, and I fought like a banshee.” Her feud with Lloyd Webber intensified when she starred in the West End (London) production of his Sunset Boulevard (1993) — contracted for its Broadway run, she saw the part of recluse movie star Norma Desmond go to Glenn Close (who won the Tony for it) and received a reported $1 million settlement when she sued.

With the proceeds, she built what she called “The Andrew Lloyd Webber Memorial Pool” in the backyard of her Connecticut home. But in 2018, as she prepared to sing “Don’t Cry for Me Argentina” at the Grammy Awards (something she had previously done in 1981) she declared the clash over, and is said to have laughed when he said they should revive Evita.

Everything was coming up roses for LuPone in 2008, as her second Tony Award came for a revival of Gypsy, playing Mama Rose, the ultimate stage mother.

Off Broadway she made headlines in 2015, when she snatched a phone away from a woman who spent the entire first act of the comedy Shows for Days texting. (Irritated by an audience member who had been taking photos, she had previously stopped singing during a performance of Gypsy.)

LuPone’s film roles, in movies including Witness (1985), Driving Miss Daisy (1989), and Mamet’s Heist (2001), have tended to be supporting. Television has given her wider range, notably the dramatic series Life Goes On (1989-1993), where she played a mom with three children, one with Down syndrome.

Two other revivals also yielded LuPone Tony nominations, Cole Porter’s Anything Goes (1987) and Stephen Sondheim’s Sweeney Todd: The Demon Barber of Fleet Street (2005), for which she also played the tuba, something she had done in high school. She also received nominations for the original musicals Women on the Verge of a Nervous Breakdown (2010) and War Paint (2017), in which she played cosmetics queen Helena Rubinstein.

In 2009 she won two Grammy Awards, Best Opera Recording and Best Classical Album, for Weill: Rise and Fall of the City of Mahagonny. LuPone is a two-time Emmy nominee, for a daytime children’s special (The Song Spinner, 1996) and a guest appearance on Frasier (1998).

LuPone married Matthew Johnston in 1988. The two met while Johnston was a cameraman on set of the TV movie LBJ, in which LuPone starred as Lady Bird Johnson. The couple has a son, Joshua, born in 1990.

Patti LuPone: A Memoir was published in 2010. It does not mince words about her professional ups and downs. “I have a very high standard,” she said. “I expect everyone around me to work equally as hard because people pay a lot of money for tickets. They demand the best that we have.”