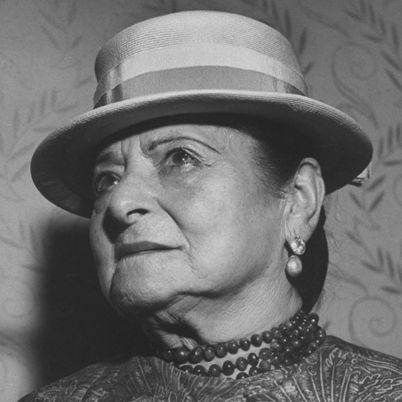 Who Was Helena Rubinstein?

Helena Rubinstein was an entrepreneur and philanthropist. In 1902, she started her business career in Australia distributing a beauty cream that her mother had used. She soon founded a beauty salon and manufactured cosmetics, working hard to expand her business at every turn. Rubinstein opened salons in London and Paris, and when World War I began she moved to America. Her beauty business grew into a worldwide cosmetics empire, and she eventually created the Helena Rubinstein Foundation in 1953 to fund organizations for children's health.

Rubinstein was born in Krakow, Poland, on December 25, 1870. While her father was strict, her mother took a unique approach with raising her eight daughters: She told them they would wield influence in the world through the powers of beauty and love. To this end, her mother even made her own beauty creams.

As the oldest child, Helena helped her father with bookkeeping, and her intelligence led him to insist she study the medical sciences. She liked the lab work but was averse to being in a hospital, and she was allowed to end her studies as long as she agreed to marry. Her choice, however, was not the 35-year-old widower her father picked out but a fellow student from the University of Krakow.

Rubinstein’s father disapproved of her choice in a husband, so she packed up and moved from her native Poland to live with her uncle in Australia. She brought along a dozen bottles of her mother’s beauty cream, made from combinations of herbs, almonds and Carpathian fir tree extract. The creams were a hit with regional women and Rubinstein gave the products away until her mother had to send more.

While working odd jobs, and with financial support of a woman whose skin had seen the benefits of the cream, Rubinstein soon began selling her products. Before long she had her own shop in Melbourne. There she met Polish-American journalist Edward William Titus, and the pair married in July 1908 in London. Working 18-hour days, Rubinstein turned a profit in her beauty business, and in 1905 she headed to Europe to study advances in skin treatments. When she returned, she started bringing over her sisters to help with the business and also brought to Australia Dr. Jacob Lykusky, the man who gave Rubinstein’s mother her cream formulas, to help create more beauty products.

In 1908, Rubinstein headed to London with £100,000 to invest in her business, and in less than a year she had opened Helena Rubinstein's Salon de Beauté Valaze. She soon bought a Paris salon and installed her sister Pauline to run it. The only thing that slowed Rubinstein down was when she was pregnant and gave birth to two sons in 1909 and 1912. Rubinstein then opened a New York salon in 1916. Salons in San Francisco, Boston, Philadelphia, Chicago and Toronto followed, as did sales of her products in department stores.

The 1920s found Rubinstein in Hollywood, teaching starlets how to properly apply makeup. Back in New York, she had a heated rivalry with both Elizabeth Arden and Charles Revson, founder of Revlon, and in 1928 Rubinstein sold her American business to Lehman Brothers. (She re-bought it cheaply soon after however, as the subsequent stock market crash made the business available at a huge discount.)

Rubinstein and Titus divorced in 1937, and the following summer she married Russian prince Artchil Gourielli-Tchkonia, who was 20 years younger. A lifelong advocate for healthy living and self-care, Rubinstein died in New York City on April 1, 1965, at age 94. A year later, her autobiography, My Life for Beauty, was published.