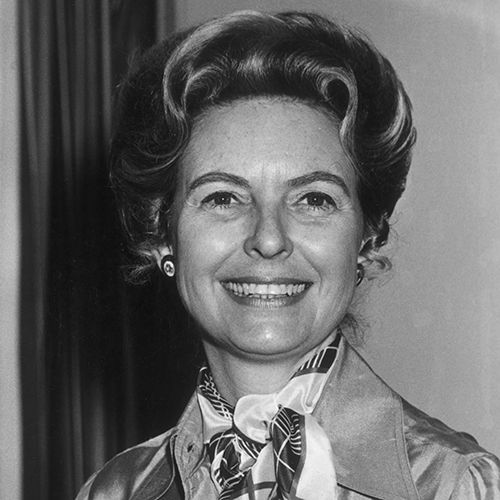 Who Was Phyllis Schlafly?

Conservative firebrand Phyllis Schlafly has been credited with swaying public opinion and preventing the Equal Rights Amendment from being added to the U.S. Constitution. During the fight to ratify the ERA, Schlafly argued that the amendment would undermine stay-at-home mothers while forcing women into military service, expanding access to abortion, and leading to the legalization of same-sex marriage. Following the defeat of the ERA, Schlafly remained a prominent conservative figure who argued against sex education, abortion and more.

Schlafly was born as Phyllis McAlpin Stewart on August 15, 1924, in St. Louis, Missouri, to Odile Dodge Stewart and John Bruce Stewart. During the Great Depression Schlafly's father lost his job. Though he would find occasional work, it was Schlafly's mother who supported the family, which consisted of Schlafly and a younger sister. Odile worked as a department store saleswoman, teacher and librarian. However, these economic struggles didn't alter the family's Republicanism or make them fans of the New Deal.

Schlafly attended the Academy of the Sacred Heart for high school, then won a scholarship to Maryville College. Yet she soon opted for a transfer to the more academically challenging Washington University. Attending college during World War II meant Schlafly could work at night testing ammunition in order to earn tuition money. Following her 1944 graduation, she earned a master's in government from Radcliffe College.

While working in St. Louis in 1949, Schlafly penned an article for a bank's newsletter. Attorney John Fred Schlafly Jr. appreciated the piece and came to meet its author. After overcoming his surprise that it had been written by a woman, he quickly fell in love. The couple wed on October 20, 1949.

In 1978 Schlafly received a law degree from Washington University. Her husband's initial disapproval had prompted her to withdraw her application, but after he gave his permission — he believed that knowing the law would help in her fight against the ERA — Schlafly was able to pursue this course of study.

In December 1971, a friend asked Schlafly to speak about the Equal Rights Amendment, a proposed constitutional amendment that would prohibit discrimination on the basis of sex. Up to this point, the conservative Schlafly had been more focused on the threat of Communism, but she did some research and became an ERA opponent. In 1972, she formed the group Stop ERA — Stop was an acronym for Stop Taking Our Privileges — to halt the amendment's ratification.

Schlafly described the ERA as "an attack on the wife and homemaker" that would subject women to the military draft and keep them from receiving alimony. She also argued that the ERA would result in gay rights, unisex bathrooms and the government paying for abortions. Schlafly was able to tap into a backlash among housewives who thought their choices were being devalued and religious conservatives who were wary of changes to traditional family structures. Many of the people Schlafly worked with were also motivated by opposition to the 1973 Supreme Court decision in Roe v. Wade, which legalized abortion.

Momentum seemed to be in the ERA's favor when Schlafly began to act. The amendment had support from both Democrats and Republicans, and both houses of Congress passed the ERA by large margins in 1972. A year later, 30 states had ratified the ERA, meaning that only eight more needed to do so in order for it to become a part of the Constitution.

To prevent ratification, Schlafly coordinated efforts to sway state legislatures. She tutored ERA opponents in talking points and had anti-ERA women give homemade bread or pies, symbolizing traditional homemaking, to legislators. She also debated feminists who supported the amendment. Schlafly's debate partners were often angered by what they saw as her lies about the ERA. Betty Friedan, author of The Feminine Mystique, told Schlafly during one of these face-offs, "I'd like to burn you at the stake. I consider you a traitor to your sex."

In November 1977, a National Women's Conference was held in Houston. Attendees voiced support for the ERA and discussed other issues such as reproductive choices, gay rights and nuclear disarmament. At the same time Schlafly coordinated an opposition Pro-Life, Pro-Family Rally. The event welcomed at least 15,000 attendees, with overflow crowds, at Houston's Astro Arena. The strength of this gathering was considered a turning point in Schlafly's anti-ERA campaign. In January 1977, Indiana had ratified the amendment, becoming the 35th state to do so — but no other state followed.

Congress passed a bill extending the deadline for ratification from March 22, 1979, to June 30, 1982, but the ERA still fell short of the required state ratifications by the second deadline. In fact, five state legislatures had voted to rescind their earlier ratifications (though the legality of these rescissions was unclear). Schlafly celebrated her win with a party at a hotel in Washington, D.C., and announced the ERA was "dead for now and forever in this century." 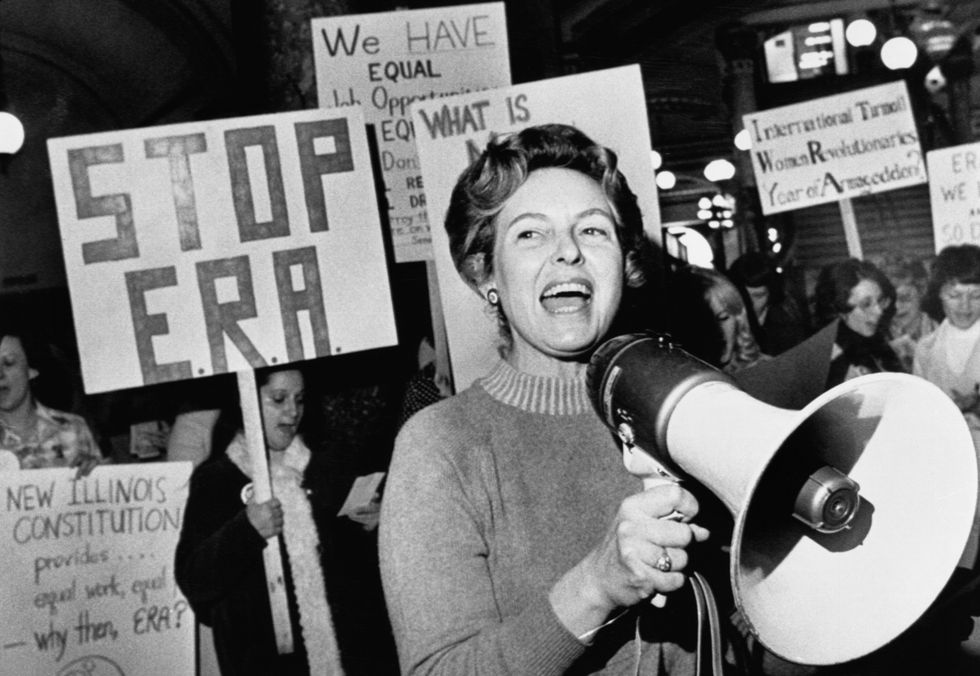 Phyllis Schlafly leads members opposed to the Equal Rights Amendment in a song about the pro-ERA force’s plan for a national demonstration.
Photo: Bettmann Archive/Getty Images

In 1958 Schlafly and her husband founded a Catholic anti-Communist group, called the Cardinal Mindszenty Foundation, in honor of a Hungarian priest who had been persecuted by his country's Communist regime. She supported nuclear testing, stating, "The atomic bomb is a marvelous gift that was given to our country by a wise God." Schlafly also unleashed vitriol on politicians, including Republicans, whom she considered weak on national defense.

From 1952 until 2016, Schlafly attended every Republican National Convention. She supported conservative Republicans such as Barry Goldwater and Ronald Reagan. Schlafly's anti-ERA stand and vocal support for conservative causes are thought to have made it possible for Reagan to win the presidency in 1980. She endorsed Donald Trump at a rally in March 2016, a few months before she passed away.

Schlafly made unsuccessful runs for Congress in 1952, 1960 and 1970. In the 1960s she was part of the Illinois Federation of Republican Women and the National Federation of Republican Women. Reagan recognized Schlafly's political skills — once describing her as "darn effective" in his diary — but the only appointment he gave her was to the Commission on the Bicentennial of the U.S. Constitution.

Feminism and the Role of Women

Schlafly's national profile was tied to her vocal support for the idea that women should focus on the roles of wife and mother. However, her household featured a different division of labor. Spearheading the Stop ERA campaign and working on other conservative causes often required Schlafly to travel away from home. Her domestic life was eased by a full-time housekeeper.

Feminists noticed the variance between Schlafly's public statements and her private life. Schlafly countered by stating that she had stayed home with her six children, breastfeeding them for six months and homeschooling them until the age of seven (though she ran for Congress in 1952 when her first child was a toddler).

Schlafly also characterized her political work as a "hobby" that was only undertaken with her husband's permission. At many events, her opening words were, "I want to thank my husband Fred for letting me come here," something she said in part because "it irritates the women's libbers more than anything." In a 1978 interview, she stated, "When I fill out applications, I put down 'Mother' as my occupation."

As evidence of her rejection of the women's rights movement of the 1960s and '70s, Schlafly declared that to her the title "Ms." meant misery. She also stated that technical advances from male inventors — such as disposable diapers and frozen foods — had done far more to improve women's lives.

In 1964, Schlafly penned A Choice Not an Echo, a polemic against the elites she believed were controlling the nomination process in the Republican Party. The self-published book sold three million copies. Many Republican delegates to the 1964 convention read and said they were influenced by this work, which helped Senator Goldwater land the Republican presidential nomination that year (he went on to lose the election to President Lyndon B. Johnson).

Schlafly also wrote about national defense and produced books that denounced feminism, such as 1977's The Power of the Positive Woman. At the time of her death The Eagle Forum stated that Schlafly had authored or co-authored 27 books, including 2016's The Conservative Case for Trump.

Schlafly and her husband, Fred, lived in Alton, Illinois, a suburb of St. Louis. Together they had four sons and two daughters. The marriage lasted until Fred passed away in 1993.