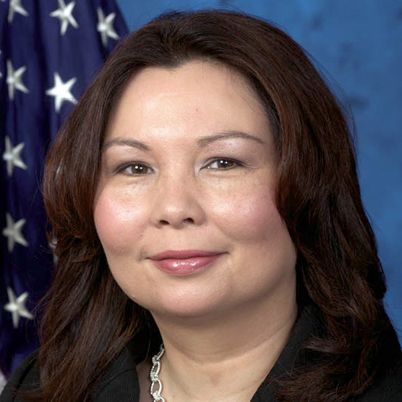 Who Is Tammy Duckworth?

Tammy Duckworth was deployed to serve in the Iraq War in 2004 and lost both of her legs when her helicopter was struck. Duckworth became director of the Illinois Department of Veterans' Affairs in 2006, and three years later President Barack Obama appointed her assistant secretary in the U.S. Department of Veterans Affairs. In 2012, she was elected to Congress, representing Illinois’ 8th District. Four years later, she was elected a U.S. senator, thereby becoming the first disabled woman and the second Asian American woman in the Senate. In April 2018, Duckworth became the first female senator to give birth while holding office.

Ladda Tammy Duckworth was born on March 12, 1968, in Bangkok, Thailand, to a mother of Chinese heritage and a father of British descent. Because her father did refugee work for the United Nations, Duckworth's childhood took place against varied backdrops — spanning Thailand, Indonesia, Singapore, Cambodia and Hawaii.

Duckworth, along with her mother, Lamai, and her father, Franklin, moved to Hawaii as a teenager. After high school, Duckworth earned her undergraduate degree at the University of Hawaii. Afterward, she obtained her Master of Arts in international affairs at George Washington University in Washington, D.C. In pursuit of yet more higher education, Duckworth then relocated to Illinois, where she enrolled in a political science Ph.D. program at Northern Illinois University.

While attending NIU, Duckworth enrolled in the Reserve Officers' Training Corps with the Illinois Army National Guard. Trained as a Blackhawk pilot, in 2004 Duckworth left NIU when she was deployed to Iraq. In Iraq, Duckworth flew Operation Iraqi Freedom combat missions until her helicopter was struck by a rocket-propelled grenade in the autumn of 2004.

The explosion took both of Duckworth's legs and robbed her of full function in her right arm. Still believing in the worthiness of her mission amid questions of whether she felt her sacrifice was for naught, Duckworth responded, "I was hurt in service for my country. I was proud to go. It was my duty as a soldier to go. And I would go tomorrow." She did, however, express frustration that U.S. policymakers were failing to match the sacrifices of American soldiers.

Following her injuries, Duckworth was promoted to major and awarded the Purple Heart. During her year's recovery time at the Walter Reed Army Medical Center, she became an activist, advocating for better medical care for wounded veterans and their families. Duckworth presented her impassioned views to Congress, testifying on two separate occasions.

Duckworth's activism led her to pursue a political career after her recovery. In 2006 she ran for Congress but lost by a narrow margin. Instead, she took an appointment as director of the Illinois Department of Veterans' Affairs. In this role, she worked toward developing an incentive program that would give employers a tax credit for hiring war veterans. She also initiated programs that would provide veterans and their families with better mental support, health care and housing resources.

After President Obama was elected, he chose Duckworth as his assistant secretary for public and intergovernmental affairs in the U.S. Department of Veterans Affairs. In her new role, Duckworth focused largely on putting a stop to the cycle of homeless veterans. She also developed resources especially tailored to the unique needs of female veterans.

In 2012, Duckworth took a second shot at a seat in Congress, as a Democrat representing Illinois, and won. Her victory was twofold: Not only did Duckworth now have the platform to advance her political agenda, but she also became a living example for fellow female veterans, as the first disabled woman ever to be elected to the U.S. House of Representatives.

During her time in the House of Representatives, Duckworth worked in a number of committees including the House Committee on Armed Services, the House Committee on Oversight and Government Reform, as well as the House Select Committee on the Events, Surrounding the 2012 Terrorist Attack in Benghazi. In 2013, during a House hearing, she made headlines when she took Virginia CEO Braulio Castillo to task for fraudulently representing himself as a disabled military vet and receiving millions of dollars in federal contracts. "Shame on you. You may not have broken any laws … [but] you broke the trust of veterans.” Duckworth added, “Twisting your ankle in prep school is not defending or serving this nation.”

In 2016, Duckworth successfully ran for the U.S. Senate against incumbent Mark S. Kirk, thereby becoming the second female Asian American to win a Senate seat (California's Kamala Harris soon became the third) and the first disabled woman to accomplish the task. An outspoken Democrat, she railed against President Donald Trump during the brief government shutdown in January 2018, saying, "I will not be lectured about what our military needs by a five-deferment draft dodger."

Motherhood in the Senate

Prior to her injuries, Duckworth married Major Bryan Bowlsbey of the Illinois Army National Guard. She announced her retirement from the military in October 2014, shortly before giving birth to a daughter.

In January 2018, Duckworth announced that she was expecting a second daughter in April, which would make her the first senator to give birth while holding office. Noting it was "about damn time" someone achieved this, Duckworth said, "I can't believe it took until 2018. It says something about the inequality of representation that exists in our country."

A few weeks later, the senator penned an op-ed piece in which she pushed for expanded benefits for parental leave. Noting that she was among the lucky ones who would be able to enjoy paid time off while caring for a newborn, she cited the FAMILY Act, proposed by New York Senator Kirsten Gillibrand, and the Child Care for Working Families Act, from Washington's Patty Murray, as examples of legislation that would help people balance the responsibilities of parenting and their careers.

On April 9, 2018, Duckworth gave birth to a baby girl, Maile Pearl, at a hospital in Arlington, Virginia. Along with tweeting messages that thanked friends and family for support, she issued a statement that showed she had an eye on returning to work. Duckworth then showed she meant those words seriously when she took 10-day-old Maile with her to cast what could have been a deciding vote against a Trump nominee for NASA administrator. The baby's presence came one day after the Senate changed its admission rules, making the senator and Maile the first mama-daughter team appear on the chamber floor during a vote.

Duckworth made her formal return to the Senate on July 2, noting she would have a nanny there to help care for Maile and make use of the breast pump and refrigerator in the new health and wellness room. She said it had been nice to get away and have quiet moments with her newborn, but added that she couldn't get too detached from work with her vote occasionally needed and other issues, like the administration's controversial border policy that separated immigrant families, commanding her attention in recent weeks.