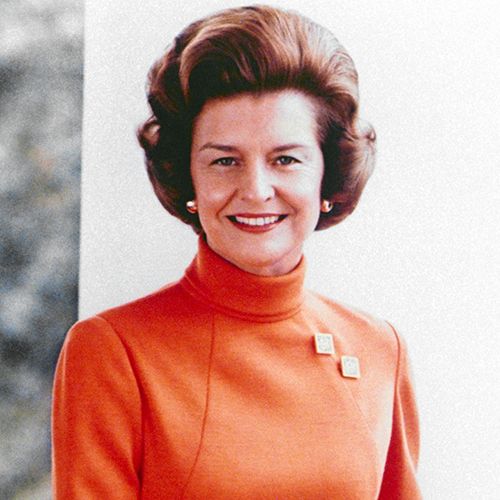 Who Was Betty Ford?

Betty Ford became the first lady of the United States when her husband, Gerald Ford, assumed the office following President Richard Nixon's resignation. She became well known for her openness as first lady—a trend that continued after the Fords left the White House, when she created the Betty Ford Center for addiction.

Born Elizabeth Anne Bloomer in Chicago, Illinois, on April 8, 1918, Betty Ford was the third child and only daughter of William Bloomer Sr. and Hortense Neahr. Her father worked for the Royal Rubber Company in Grand Rapids, Michigan; her mother was related to a wealthy Grand Rapids furniture manufacturing family.

Betty's mother thought social graces were important, so in 1926 eight-year-old Betty enrolled at Calla Travis Dance Studio in Grand Rapids, where she studied ballet, tap and modern movement. Dance became a passion, and soon Betty decided to pursue it as a career. At 14, she taught younger children dances such as the foxtrot, waltz and "The Big Apple." While still in high school, she opened her own dance school teaching children and adults.

When Betty was 16, her father was asphyxiated by carbon monoxide poisoning while working on the family car in a closed garage. It was never confirmed whether his death was accidental or a suicide. With the main bread-winner gone, Betty's mother supported the family by working as a real estate agent. Her strength and independence in the face of tragedy greatly influenced Betty, shaping her views on equal pay and equality for women.

After graduating from high school, Betty spent two summers at the Bennington School of Dance in Vermont studying under legendary choreographer and dancer Martha Graham. To pay for her lessons, she worked during the year as a model at a Grand Rapids department store. In 1940, Betty was accepted to study and work with Martha Graham's auxiliary troupe in New York City. She made numerous appearances as a dancer, including a performance at Carnegie Hall.

Hortense Bloomer never completely accepted her daughter's career choice and urged Betty to come home. Finally, after realizing that she would probably not be a premier dancer, Betty returned to Grand Rapids in 1941 to work full-time at Herpolscheimer's department store. After a series of promotions, she became a fashion coordinator for the store. She continued her strong interest in dance, teaching at Travis Dance Studio in Grand Rapids and organizing her own dance troupe. She also offered weekly dance classes to African American children and taught ballroom dancing to children with sight and hearing disabilities.

In 1942, Betty met and married William C. Warren, a furniture salesman whom she had known since she was 12. Warren had a series of jobs in different cities, often as a traveling salesman, and Betty sometimes worked as a department store saleswoman and model in cities where they lived. After three years, however, Betty realized the marriage was not going to work. She wanted a home, family and children, and grew tired of the couple's itinerant lifestyle. However, before she could discuss a divorce, Warren fell ill with acute diabetes. While he recovered over the next two years, Betty worked to support them both. This experience left her with a strong impression of the inequalities in compensation between genders for doing the same job. After Warren recovered, the couple ended their marriage.

In August 1947, Betty met 34-year-old attorney Gerald Ford, a U.S. Navy lieutenant. Gerald had returned from duty to resume his law practice, and to run for U.S. Congress. The couple dated for a year before Ford proposed in February 1948, and the couple married two weeks before the November election. He picked this date because he was concerned the voters in his conservative district might have second thoughts about him marrying a divorced ex-dancer. During the wedding rehearsal dinner, Gerald had to leave early in order to make a campaign speech. The day after their wedding, the Fords attended a political rally, followed by a University of Michigan football game and a speech by New York governor Thomas Dewey. Gerald won the election three weeks later, ushering Betty into the world of politics.

In December 1948, the Fords moved to a Virginia suburb outside of Washington, D.C. Betty quickly immersed herself in the political process. She got to know the names and positions of powerful legislative figures, served as her husband's unofficial adviser, and networked with other Congressmen's spouses. As Gerald built his Congressional career, winning re-election 13 times and rising to the position of House Minority Leader, Betty assumed the traditional responsibilities of a father as well as a mother to their four children. She also became involved with charity organizations and volunteer work.

On December 6, 1973, Gerald was appointed Vice President under Richard Nixon, after Vice President Spiro Angew resigned. Then, on August 9, 1974, in an unprecedented move, Nixon resigned from office under pressure from the Watergate scandal. Under United States law, Gerald became the 38th President of the United States and Betty was officially the first lady.

In short order, it became apparent that the new first lady was going to make an impact.

Betty became known for dancing to disco music at informal White House events, and was especially good at the dance move, "The Bump." She chatted on her CB radio under the call name "First Mama." But Betty could also be very serious on subjects such as equal rights for women, abortion and divorce. At times, her outspokenness raised disapproval from the more conservative elements of the Republican Party. After a 60 Minutes appearance where she openly discussed how she would counsel her children if they were involved in pre-marital sex and recreational drugs, some conservatives called her "No Lady" and demanded her resignation. But the nation as a whole found her openness appealing, and her approval rating reached 75 percent.

Weeks after Betty became the first lady, she was diagnosed with malignant breast cancer during a routine exam. Betty underwent a mastectomy, and her openness about her illness raised visibility for a disease that Americans had previously been reluctant to discuss. During her convalescence, she realized the influence and power being the first lady had on influencing policy and creating change. She supported the Equal Rights Amendment and lobbied hard for its passage. She also became a strong advocate for a women's right to free choice in many decisions that affected their lives. As a result of her efforts, TIME magazine named her woman of the year in 1975.

In 1976, Betty showed her innate political skills when her husband ran for the presidency against Democratic challenger Jimmy Carter, who formerly served as governor of Georgia. The first lady played a highly visible role during the campaign. She not only advocated for her husband, but also stood as a symbol of a moderate Republican as the conservative Republican wing of the party began to emerge. Betty taped radio ads, spoke at rallies and campaigned hard, despite the tremendous strain on her health. Though most of her activities were spontaneous, she was often confined to stops in moderate-to-liberal states by the campaign staff, who worried at times that Betty was appearing more liberal than Rosalynn Carter, the Democratic candidate's wife. She remained very popular with the public, however, and many supporters for President Ford wore buttons saying "Vote for Betty's Husband." When Gerald lost to Carter in the election, it was Betty who delivered his concession speech, due to her husband's bout with laryngitis in the last days of the campaign.

Struggle with Addiction and the Betty Ford Center

Since the early 1960s, Betty Ford had been taking opioid analgesics for pain from a pinched nerve. Her dependency on these drugs had dissipated during her time in the White House, but after leaving Washington, D.C., her drinking of alcohol increased—as did her use of prescription drugs. In 1978, the Ford family staged an intervention and forced Betty to confront her addiction to alcohol and pain pills. After her initial anger over the intrusion in her life, Betty remained home for a week and underwent a monitored detoxification. She then entered Long Beach Naval Hospital for drug and alcohol rehabilitation. There, the former first lady shared a room with other women, cleaned restrooms and participated in emotional therapy sessions. In keeping with her sense of authenticity, Betty fully disclosed her addictions and resulting treatment to the public shortly after her release from the hospital.

The experience in drug rehab had a profound effect on Betty. She realized during her convalescence that, as a former first lady, she had the power to create change and affect behavior. She also realized there was no recovery facility specifically established to help women with the unique problems associated with drug and alcohol abuse. In 1982, after her full recovery, Betty helped establish the Betty Ford Center, dedicated to helping all people, but especially women, with chemical dependency. Through her work at the Betty Ford Center, Betty began to understand the connection between drug addiction and those suffering from HIV/AIDS. She soon began to voice her support for gay and lesbian rights in the workplace and spoke out in support of same-sex marriage.

In 1987, Betty published a book about her treatment entitled Betty: A Glad Awakening. In 2003, she produced another book, Healing and Hope: Six Women from the Betty Ford Center Share Their Powerful Journeys of Addiction and Recovery. In 1991, she earned the Presidential Medal of Freedom by George H.W. Bush; then received the Congressional Gold Medal in 1999; and was honored with the Woodrow Wilson Award for public service.

Gerald, Betty's husband of 58 years, died on December 26, 2006, at the age of 93. The couple had four children together: Michael, John, Steven and Susan. After her husband's death, Betty refrained from any public appearances, but remained active as chair-emeritus of the Betty Ford Center.

On July 8, 2011, Betty died of natural causes at Eisenhower Medical Center in Rancho Mirage, California. After her death, her casket was flown to Grand Rapids, Michigan, where it lay in the Gerald Ford Museum over the night of July 13, 2011. She was buried next to her husband during a funeral service on July 14, 2011, on what would have been her husband's 98th birthday.