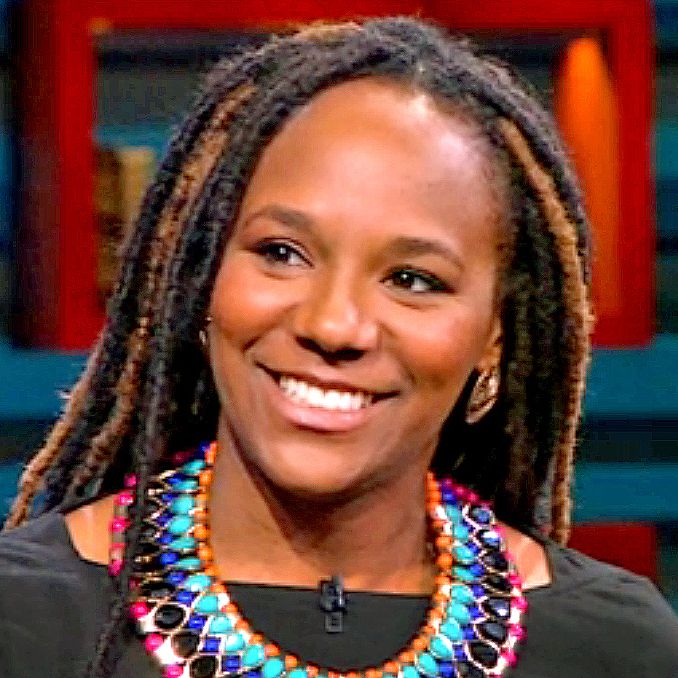 Who Is Bree Newsome?

Bree Newsome is an artist and activist who seeks to end structural racism and violence against Black bodies. On June 27, 2015, ten days after a white supremacist shot and killed nine Black parishioners in a church in Charleston, South Carolina, Newsome climbed a flagpole at the South Carolina Capitol grounds to remove a Confederate battle flag; she was arrested for this and became the focus of media attention. A Christian, Newsome finds her faith provides her with both guidance and the strength to do her work.

Born Brittany Ann Byuarim Newsome in Durham, North Carolina in 1985, Newsome grew up in a diverse community in Columbia, Maryland. Her father was dean of the School of Divinity at Howard University (he later became president of the National Underground Railroad Freedom Center), and her mother was an educator.

Her parents instilled in their daughter the belief that if she wanted to be a responsible citizen, she should develop political awareness. Newsome also learned, as she said while on a panel in 2014, "The space that exists for many of us, as a young Black girl, is so extremely limited that you really can’t go very far without being an activist, without being in defiance of something."

Growing up in the 1990s, Newsome loved Disney movie musicals and studied them to get a sense of storytelling, which she demonstrated when she began writing her own plays. She also expressed an early interest in music and was composing by the age of seven, a talent that continued to develop as she progressed in school. (Musical ability seems to run in her family, as she's related to jazz musician McCoy Tyner.)

When her school system instituted a "Gifted and Talented" program for advanced students, Newsome witnessed bigotry in action as she was one of just a few Black students in this group — and her educator mother had to push for access.

Then going by Brittany, Newsome excelled at Oakland Mills High School, where her interests ranged from school musicals and choir to student politics (she was class president and became student body president her senior year). While in school she also made an animated short called The Three Princes of Idea (this resulted in a scholarship from the National Academy of Television Arts and Sciences). Newsome graduated in 2003.

Newsome next became a film student at New York University's Tisch School of the Arts. There, she helmed an award-winning 20-minute short, Wake. While at Tisch she also created a PSA called "Your Ballot, Your Voice" to encourage young voters; it won the grand prize in a competition set up by her school and MTV.

Newsome considers herself to be both an artist and an activist, and has said that artists telling the truth about the world is itself a form of activism. After college, she became an artist-in-residence at Saatchi & Saatchi, a New York advertising agency. She also guest taught high schoolers for a film program in the Bronx.

Newsome played in a funk band called Powerhouse and writes songs, including ones that incorporate her interests in politics and activism. She created a popular rap video called "Shake It Like an Etch-a-Sketch" about Mitt Romney and his switch from a hard-right stance in the Republican presidential primary to a more moderate mien intended to woo voters in the 2012 election.

Though Newsome marched with Occupy Wall Street, the death of Trayvon Martin, a Black teenager killed in 2012 while walking in his father's neighborhood, and the subsequent acquittal of George Zimmerman — with a claim of self-defense — in his 2013 trial spurred her to do more. Among other efforts, she went to Florida to demand justice for Trayvon, took part in marches and became active in the Black Lives Matter movement.

Newsome was shocked when North Carolina's legislature sought to restrict access to voting (such as ID requirements that didn't accept student IDs and cutting back on early voting). In 2015, she said, "It was the attack on voting rights in North Carolina that 'activated' me and I moved from being a sideline supporter to an activist."

In 2013 she joined with the Moral Monday movement in North Carolina, in which members of various groups came together to protest. In an attempt to confront Thom Tillis, then North Carolina's speaker of the house, about the voter suppression measures being put into place, Newsome participated in a sit-in at his office. It ended with the group's arrest, which was Newsome's first.

Takes Down Flag in South Carolina

Early in the morning on June 27, 2015, Newsome got into climbing gear at the South Carolina Capitol. Given word the coast was clear, she received a boost from a fellow activist and began ascending the 30-foot flagpole displaying the Confederate flag. Though police arrived at the scene, she successfully took the flag down, saying, "You come against me with hatred, oppression and violence. I come against you in the name of God. This flag comes down today."

Supporters often claim the Confederate flag honors Southern heritage and soldiers. However, for many the fact that it is a symbol of the Confederacy makes it a powerful emblem of racism, as the Confederate goal in the Civil War was to forestall the elimination of slavery (the four million Black people who were enslaved when the war started had an economic value of about $3 billion to their white "owners"). The Confederate belief in the justness of slavery was clearly stated at the time; when South Carolina outlined its causes of secession, the document bemoaned "an increasing hostility on the part of the non-slaveholding States to the institution of slavery." (Some of Newsome's ancestors were held in bondage in South Carolina at the time this declaration was made.)

Pictures of racist Charleston murderer Dylann Roof posing with a Confederate flag were publicly available, and after the shooting, lawmakers had begun debating whether to take the flag down. At the service for Reverend Clementa Pinckney, a shooting victim and South Carolina state senator, President Barack Obama called for this to happen, saying the battle flag served to remind people "of systemic oppression and racial subjugation." Newsome acted the day after Obama spoke, although plans for what she did had already been in motion.

Though she was the one on the flagpole, there were about ten people who worked together to render Newsome's feat possible. This group agreed that, as Newsome was one of those physically capable of climbing the flagpole, having a Black woman take down the Confederate symbol would make a powerful statement. She then was tutored by a Greenpeace activist on how to scale the pole. Knowing she would be arrested, Newsome prepared for that — and steeled herself for the risk that someone might shoot at her while she was exposed in the air. 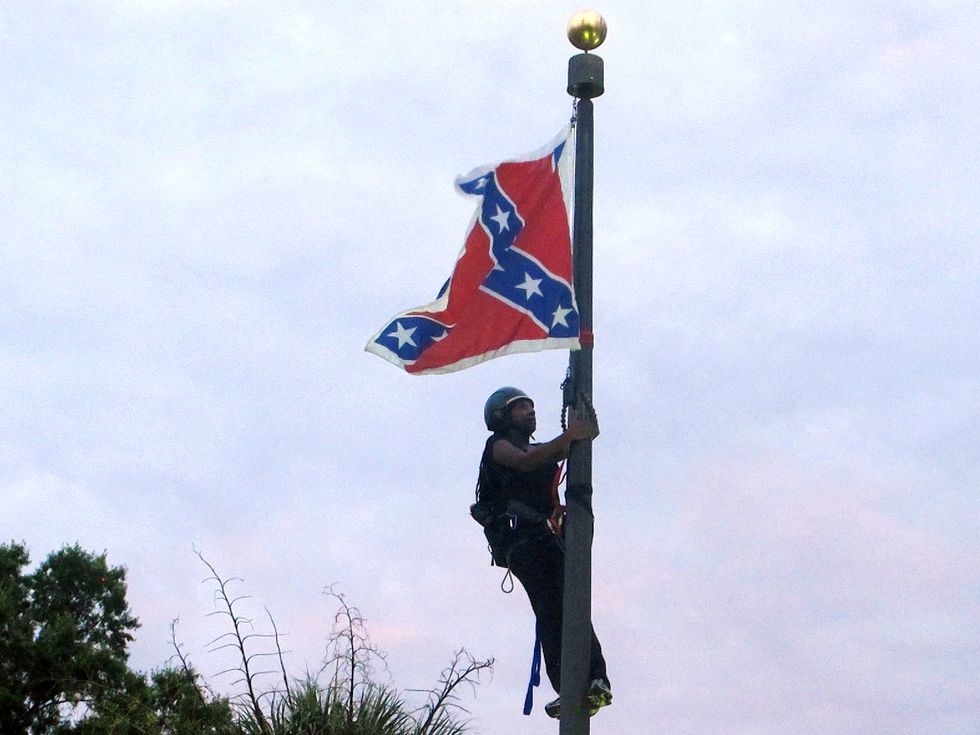 After her descent, the police arrested Newsome (and James Ian Tyson, a white male ally who'd assisted her, and whose presence demonstrated that people of different races opposed the flag's presence). They were released on bail, but she and Tyson initially faced misdemeanor charges of defacing a monument on Capitol grounds, which could have resulted in a fine of up to $5,000 and/or a prison term of up to three years. These charges were later dropped.

Another Confederate flag was up less than an hour after Newsome came down, in time for a rally of supporters. However, legislators ended up voting to remove the flag and then-Governor Nikki Haley signed the bill authorizing this. The flag was taken down on July 10, 2015, and sent to a museum.

The Confederate flag had been on display there since 1961 (the official reason it went up was to commemorate the centennial of the start of the Civil War, but the flag remained aloft as the civil rights movement grew in strength). After objections, in 2000 it was moved away from the dome of South Carolina's State House and placed next to a soldiers' monument. Newsome feels that what she and her group did helped push the government to finally remove the flag.

Newsome's goal was to make a stand for racial justice and equality, but her climb also resulted in her becoming a public icon. Inspired by the image of her on the flagpole, artists portrayed her as a superhero, people donated to her defense and she gained numerous Twitter followers. Celebrities also voiced their support; director Ava DuVernay tweeted, "Yes. I hope I get the call to direct the motion picture about a Black superhero I admire. Her name is @BreeNewsome."

Newsome received the NAACP's Chairman's Award in 2016, which the organization offers "to individuals and organizations who have used their distinct platforms to be agents of change."

With her elevated profile, she's able to address different groups, including with a talk called "Tearing Hatred from the Sky."

For Newsome, increased awareness of racial injustice is of the utmost importance, as she wants more people to try to effect positive change. In 2017, she wrote in the Washington Post, "Our nation faces a fork in the road and a decision to either continue down the same path of systemic racism or to confront our past honestly. It will increasingly fall upon everyday people to do the right thing."