Throughout history, Black women have faced the uphill battles of both racial and gender biases, especially in male-dominated STEM (Science, Technology, Engineering and Mathematics) fields. Even so, many overcome their adverse circumstances, making invaluable contributions to the scientific community, particularly in the United States Space Program. The issue, however, is that the contributions these brilliant pioneers made largely went unnoticed.

NASA scientists including Katherine Johnson, Dorothy Vaughan and Mary Jackson began to get some overdue credit, however, when author Margot Lee Shetterly released her 2016 tome, Hidden Figures: The American Dream and the Untold Story of the Black Women Who Helped Win the Space Race.

A film adaptation with the shortened title, Hidden Figures, hit theaters the same year to great acclaim, earning three Oscar nominations, including one for Best Picture.

These works told the stories of the women of color largely hired by the National Advisory Committee for Aeronautics (NACA, later NASA) during World War II to work as “human computers,” manually crunching numbers, filling the many vacancies left by those fighting the war overseas.

President Franklin D. Roosevelt signed a 1941 executive order into law that prohibited racial, religious and ethnic discrimination in the country’s defense injury, thus paving the way for these “hidden figures’” advancements. While there are no official numbers on how many women filled these roles over the years, experts have estimated there were several hundred over the years. (Shetterly’s estimate was in the thousands.)

Of course, Black women’s contributions aren’t limited to NASA. Here are 10 of the women who used their brains to skyrocket to the top of their fields. 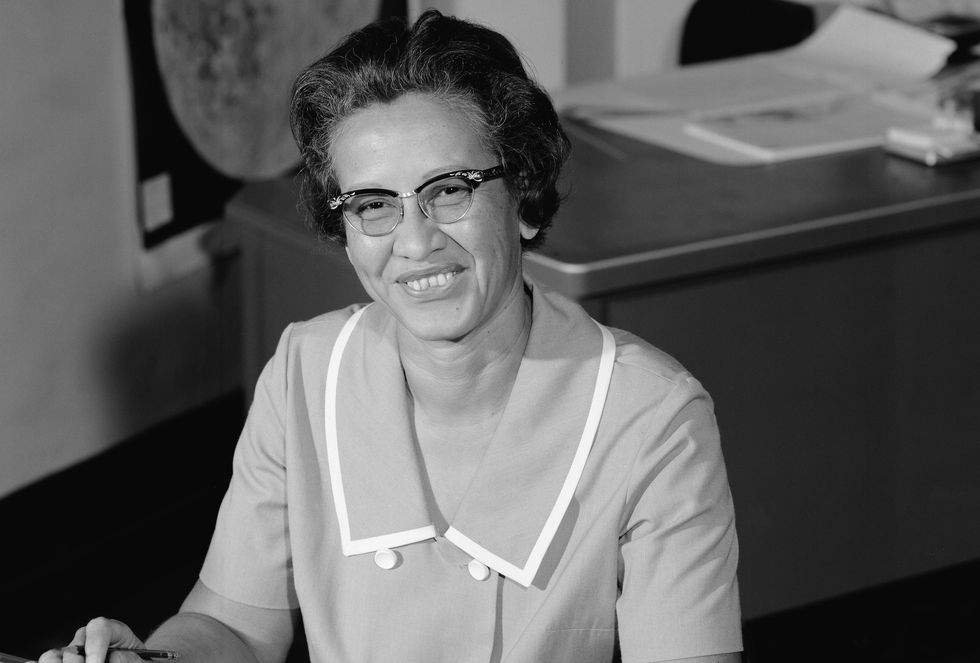 Even astronaut John Glenn put his full faith in Johnson, requesting she re-do all-electronic computer calculations before he embarked on his 1962 Earth orbits. Glenn has been quoted as remarking, “If she says they’re good, then I’m ready to go.”

Aside from earning a 2015 Presidential Medal of Freedom, Johnson was portrayed by actress Taraji P. Henson in 2016's Hidden Figures.

Also a central part of Hidden Figures, Dorothy Vaughan (who was played by Octavia Spencer in the movie) left her position as a high school math teacher for a "temporary war job" in Langley's all-Black group of female mathematicians known as the West Area Computing Unit in 1949. During what would become a nearly decade-long career, Vaughan became NASA's first African American manager, eventually heading up the West Area Computing Unit.

An expert in NASA's programming coding language known as FORTRAN, she worked on the SCOUT (Solid Controlled Orbital Utility Test) Launch Vehicle Program that put America’s first satellites into space. Before her retirement from NASA in 1971, she also worked closely with Johnson on the computations for Glenn's orbital space missions. 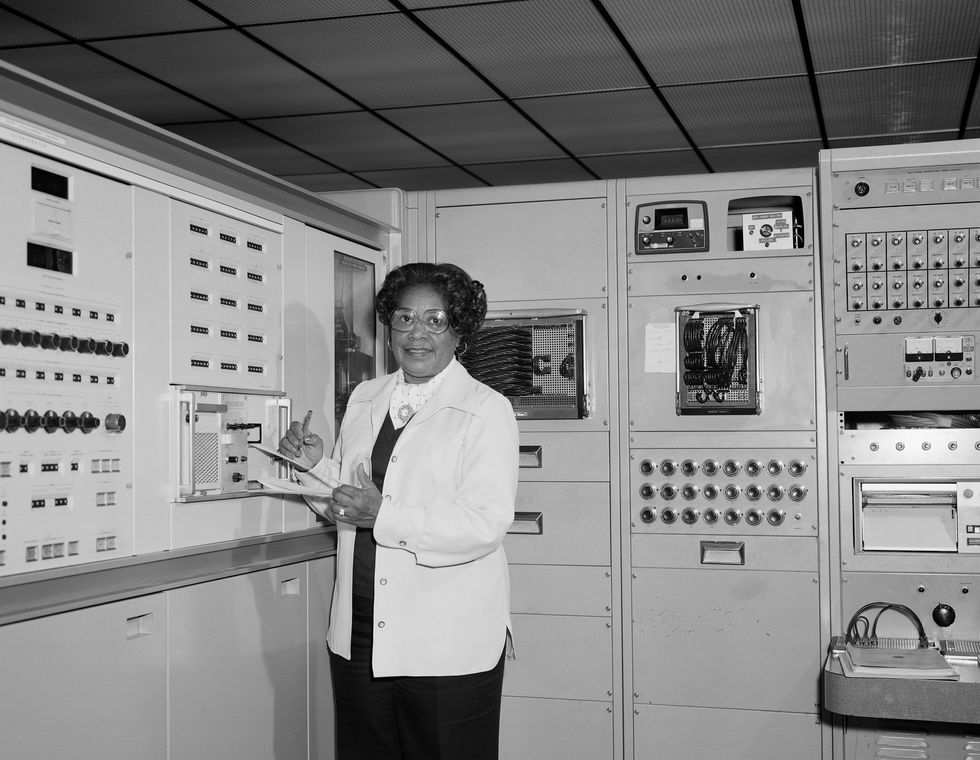 Mary Jackson began working under Vaughan's supervision in the segregated West Area Computing section as a computer in 1951. After two years in that role, the former teacher (who was portrayed in Hidden Figures by actress and musician Janelle Monae) transitioned to working for engineer Kazimierz Czarnecki on wind tunnel experiments.

At Czarnecki's urging, she took engineering classes, and, after being promoted to aeronautical engineer in 1958, Jackson officially became NASA’s first Black female engineer. After helping develop the space program throughout her successful career (during which she authored or co-authored about 12 research reports), the Virginia native took a demotion to fill the role of Langley’s Federal Women’s Program Manager. In that position, she devoted her time to helping other women find STEM jobs at NASA.

When Gladys West was inducted into the Air Force Space and Missile Pioneers Hall of Fame in December 2018, the organization hailed her as the hidden figure whose mathematical work lead to the invention of the Global Positioning System (GPS). In 1956, she began working at the U.S. Naval Weapons Laboratory and helped produce a study that proved the regularity of Pluto’s motion relative to Neptune.

Also while at U.S. Naval Weapons Laboratory, she programmed an IBM 7030 “Stretch” computer that delivered refined calculations for an “extremely accurate geodetic Earth model, a geoid, optimized” for what would eventually become known as GPS.

Mae Jemison was a woman with many firsts to her credit. She was working in the medical field as a General Practitioner and attending graduate engineering classes in Los Angeles when NASA admitted her to its astronaut training program in June 1987. After more than a year of training, she became the first African American woman astronaut, holding the title of science mission specialist.

On September 12, 1992, Jemison, along with six other astronauts, launched into space aboard the Endeavour, and with that earned the distinction of the first African American woman in space as well. During her eight-day mission, Jemison conducted experiments on weightlessness and motion sickness. Prior to her career as an astronaut, she also acted as a Peace Corps medical officer for Sierra Leone and Liberia.

A theoretical physicist, Shirley Jackson was the first Black woman to graduate with a Ph.D. from the Massachusetts Institute of Technology (MIT) in any field (Her Ph.D. is in Theoretical Elementary Particle Physics) and also just the second African American woman to earn a doctorate in physics in U.S. history.

During her tenure at what was formerly known as AT&T Bell Laboratories' Theoretical Physics Research Department in the 1970s and 1980s, she has been credited as helping develop the technology that enabled caller ID and call waiting.

President Barack Obama selected Jackson, a onetime chair of the U.S. Nuclear Regulatory Commission, to receive the National Medal of Science in 2015. She currently serves as the president of Rensselaer Polytechnic Institute, also making her the first African American woman to lead a top-ranked research university.

The first female African American medical doctor to complete an ophthalmology residency and also the first to receive a medical patent, Patricia Bath invented a laser cataract treatment device called a Laserphaco Probe in 1986. (The co-founder of the American Institute for the Prevention of Blindness patented her invention in 1988.)

Her research on health disparities between African American patients compared to those of other races lead to the creation of a volunteer-based "community ophthalmology," offering treatment to underserved populations.

After receiving her B.S. and M.S. in chemistry from Queens College and New York University respectively, Marie Daly went on to complete her Ph.D. at New York City's Columbia University. Upon graduating in 1947, she earned the distinction of being the first African American woman to receive a chemistry Ph.D. in the U.S.

Daly's groundbreaking research included studies of the effects of cholesterol on the mechanics of the heart, the effects of sugars and other nutrients on the health of arteries and the breakdown of the circulatory system as a result of advanced age or hypertension.

Another major contributor to the U.S. Space Program, Annie Easley worked on myriad projects for NASA over the course of her 30-year careers as a mathematician and rocket scientist. Like Johnson, Vaughan and Mary Jackson, she first worked as a computer and then eventually became a programmer.

Aside from conducting studies on battery-powered vehicles, Easley also worked on shuttle launches and designed and tested a NASA nuclear reactor. She was also a "leading member of the team which developed software for the Centaur rocket stage, which laid the technological foundations for the Space Shuttle launches and launches of communication, military and weather satellites," per NASA. 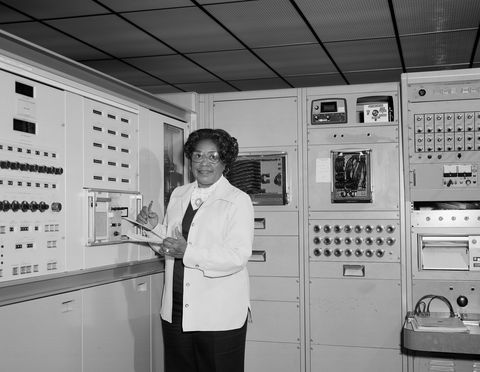