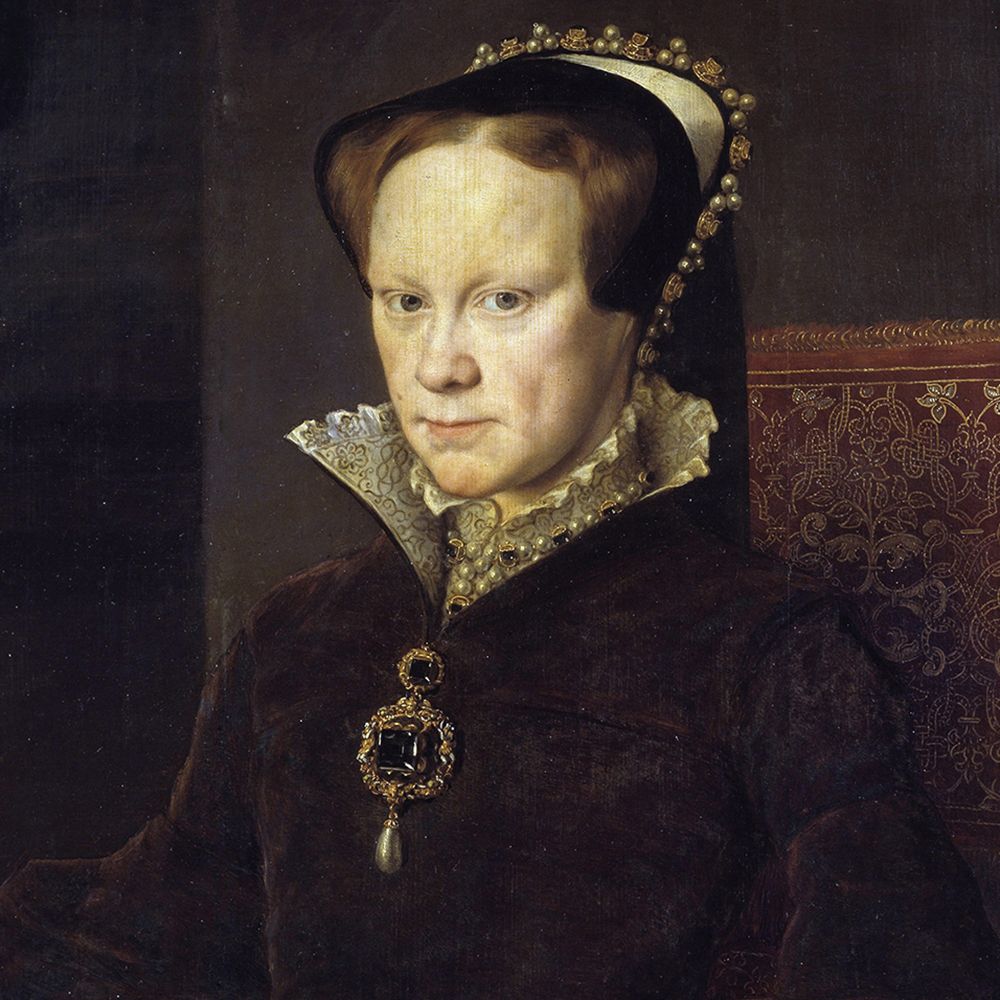 Who Was Mary Tudor?

Mary Tudor was the only child of King Henry VIII and Catherine of Aragon to survive into adulthood. Mary took the throne in 1553, reigning as the first queen regnant of England and Ireland. Seeking to return England to the Catholic Church, she persecuted hundreds of Protestants and earned the moniker "Bloody Mary." She died at St. James Palace in London on November 17, 1558.

Mary Tudor was born on February 18, 1516, at the Palace of Placentia in Greenwich, England. She was the only child of King Henry VIII and his first wife, Catherine of Aragon, to survive through childhood. She was baptized as a Catholic shortly after her birth. Tutored by her mother and scholars, she excelled in music and language. In 1525, Henry named her Princess of Wales and sent his daughter to live on the Welsh border, while he continuously tried to negotiate a marriage for her.

Frustrated by the lack of a male heir, in 1533 Henry declared his marriage to Catherine null claiming that because he had married his deceased brother’s wife, the marriage was incestuous. He broke relations with the Catholic Church, established the Church of England, and married one of Catherine’s maids of honor, Anne Boleyn. After Boleyn gave birth to Elizabeth, she feared Mary would pose a challenge to the succession to the throne and successfully pressed for an act of Parliament to declare Mary illegitimate. This placed the princess outside the succession to the throne and forced her to be the lady-in-waiting to her half-sister, Elizabeth.

Henry had the scheming Boleyn beheaded in 1536 for treason and married his third wife, Jane Seymour, who finally gave him a son, Edward. Seymour insisted that the king make amends with his daughters, but he would only do so if Mary acknowledged him as head of the Church of England and admit the illegality of his marriage to her mother, Catherine. Under duress, she agreed and although Mary did re-enter the royal court, her religious beliefs made her a lightning rod for conflict. This tension continued through the short reign of Mary's half-brother, Edward VI, who died in 1553 at the age of 15.

After Edward's death, Mary challenged and successfully deposed the new queen, Lady Jane Grey, the granddaughter of Henry’s younger sister, who was placed on the throne in a secret agreement by Edward and his advisors. Mary took the throne as the first queen regnant and reinstated her parents’ marriage. At first, she acknowledged the religious dualism of her country, but she desperately wanted to convert England back to Catholicism.

Mary was 37 at the time of her accession. She knew that if she remained childless, the throne would pass to her Protestant half-sister, Elizabeth. She needed a Catholic heir to avoid the reversal of her reforms. To accomplish this goal, she arranged to marry Philip II of Spain.

The public response to Mary's marriage was extremely unpopular, but she pressed on repealing many of Henry VIII's religious edicts and replacing them with her own, which included a strict heresy law. The enforcement of this law resulted in the burning of over 300 Protestants as heretics. Mary's religious persecutions made her extremely unpopular and earned her the nickname "Bloody Mary."

The marriage to the Spanish king produced no children and Philip, bored with his wife, spent little time in England and provided no part of his vast New World trade network to the British crown. Meanwhile, the alliance with Spain dragged England into a military conflict with France, and cost it the area of Calais, the last toehold of England’s continental possessions.

Childless and grief-stricken by 1558, Mary had endured several false pregnancies and was suffering from what may have been uterine or ovarian cancer. She died at St. James Palace in London, on November 17, 1558, and was interred at Westminster Abbey. Her half-sister succeeded her on the throne as Elizabeth I in 1559. Upon Elizabeth's death in 1603, she was buried alongside Mary.